Study: 68% of unemployed workers are eligible for benefits HIGHER than their former incomes

Federal pandemic supplement means that 68% of unemployed workers are eligible for benefits HIGHER than their former incomes, shock study reveals

Two-thirds of workers who lost their jobs in the coronavirus pandemic are eligible for unemployment benefits that exceed their lost wages, according to a new study.

The study published on Friday by three University of Chicago economists examines the impact of the $600-a-week federal unemployment supplement for those who lose jobs due to the pandemic.

It finds that 68 percent of unemployed workers who can receive benefits are eligible for payments that are greater than their lost earnings.

A shocking 20 percent of unemployed workers can get benefits that are more than double lost wages, the study finds.

The chart above shows how unemployment benefits under the CARES Act tally up for workers in different industries. Two-thirds of workers can get benefits higher than lost wages 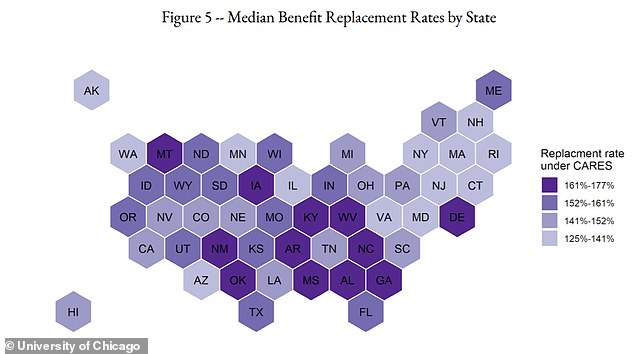 Unemployment systems are administered by states, and each state aims to provide a certain percentage of lost earnings though unemployment benefits.

The flat $600 weekly federal supplement, which was included in the CARES Act and is due to expire in July, is applied across the nation to those who lost their jobs due to pandemic shutdowns.

The new study found that the estimated median replacement rate — the share of a worker’s original weekly salary that is being replaced by unemployment benefits — is 134 percent, or more than one-third above their original wage.

The authors also created an unemployment calculator that shows what unemployment benefits a worker in every state would be eligible for both before and after the CARES Act.

Since the pandemic began, more than 36 million people across the country have filed for unemployment benefits — and as states reopen, many of them will face the prospect of giving up a government check that is bigger than their paycheck if they take their old jobs back.

Iowa, Oklahoma and Tennessee and other states have warned that if people turn down job offers because their unemployment benefits are higher than potential wages, they will see those benefits cut off.

While willingness to work has always been a requirement for receiving unemployment benefits, the current situation is unprecedented, with many workers fearing to return to the workplace in the pandemic.

Iowans who qualify for the federal benefit receive, on average, more than 120 percent of their normal salaries while drawing unemployment.

Earlier this month, Iowa Governor Kim Reynolds, a Republican, warned at a press conference that workers who are offered their job back after a layoff or furlough must return to work, or face their benefits being cut.

‘To get the economy going, in order for us to have a good recovery, we need employees to return to work when there’s an opportunity for them to do that,’ Iowa Workforce Development Director Beth Townsend said in a Des Moines Register interview last week. 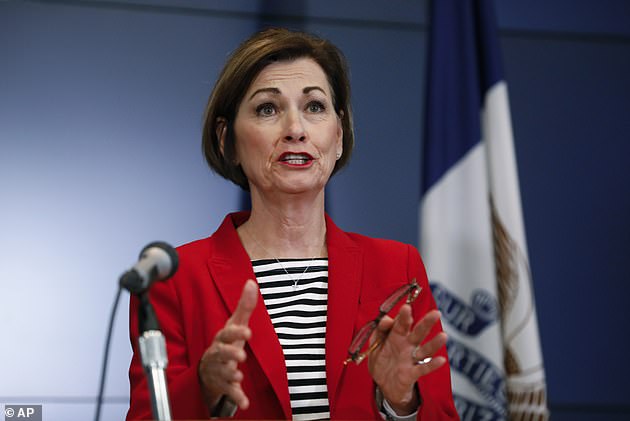 Iowa Governor Kim Reynolds, a Republican, warned at a press conference that workers who are offered their job back after furlough must return to work, or face their benefits being cut

Failing to return to work out of fear of catching the virus would be considered a voluntary resignation, which disqualifies workers from receiving unemployment benefits, officials said.

The Alabama Department of Labor also preemptively warned unemployment claimants that if their employer calls them back, they must accept work.

Supplemented unemployment benefits in Alabama are about 115 percent of average wages.

‘It’s important for workers to know that if their employer reopens or otherwise calls them back to work, they must do so, unless they have a good work-related cause,’ said Alabama Department of Labor Secretary Fitzgerald Washington in a statement.

‘Attempts to collect unemployment benefits after quitting without a good work-related cause can be considered fraud,’ he added.