Princess Beatrice accepted the marriage proposal of Edoardo Mapelli Mozzi on the terrace of an exclusive hotel with stunning views of Italy’s Amalfi Coast, The Mail on Sunday can reveal.

Sources at Le Sirenuse Hotel in Positano said multi-millionaire businessman Mr Mozzi, 36 – known as Edo – dropped to one knee as the sun set over the Tyrrhenian Sea a fortnight ago.

An insider at the luxury hotel, where Meghan Markle stayed with friends during her trip around Europe in 2016 before she met Prince Harry, said: ‘Mr Mozzi proposed on the terrace at the bar next to the swimming pool. It was in the evening as the sun went down. We have the most amazing sunsets. It was very romantic.’

Another source said: ‘It was a wonderful day for all of us. We are all very happy for them.’

Friends of the Duke and Duchess of York say that while their delight at their eldest daughter’s engagement is entirely genuine, they are also relieved that Princess Beatrice had finally found a suitable match and that the news provides respite from the damaging headlines about Prince Andrew’s friendship with paedophile Jeffrey Epstein.

For Beatrice, a friend added, a proposal at the age of 31 was doubly welcome after watching her younger sister Eugenie beat her to the altar last year.

‘Sarah and Andrew experienced a tinge of regret mixed in with their joy at Eugenie’s wedding as far as Beatrice was concerned,’ said the friend. ‘Bea had been in this long relationship with Uber executive Dave Clark that ultimately went nowhere. 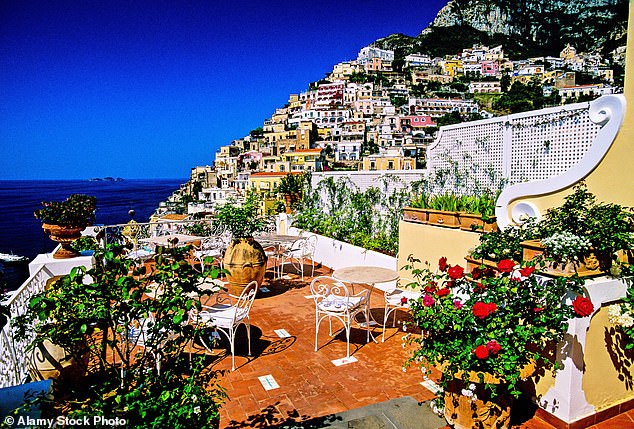 Sunset romance: The terrace at Le Sirenuse Hotel in Positano on the Amalfi Coast, Italy, where Edoardo Mapelli Mozzi proposed to Princess Beatrice as the sun went down

‘But Edo is the perfect match and an old friend of the family, so Andrew in particular is glad to have the spotlight off him and for the publicity to be positive for once. Their family is very tight-knit and will now feel complete.’

In fact, it was at Eugenie’s wedding that childhood friends Edo and Beatrice – who attended without a partner – reconnected and their whirlwind romance took off.

Last week, as Beatrice showed off her £100,000 diamond engagement ring, the couple announced: ‘We can’t wait to actually be married.’ 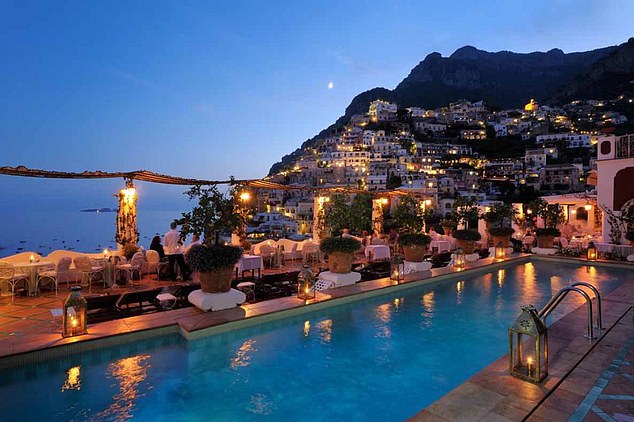 ‘Mr Mozzi proposed on the terrace at the bar next to the swimming pool. It was in the evening as the sun went down. We have the most amazing sunsets. It was very romantic’, an insider at the hotel said 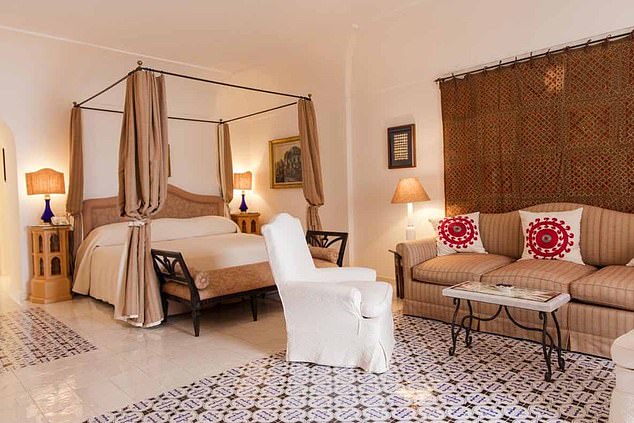 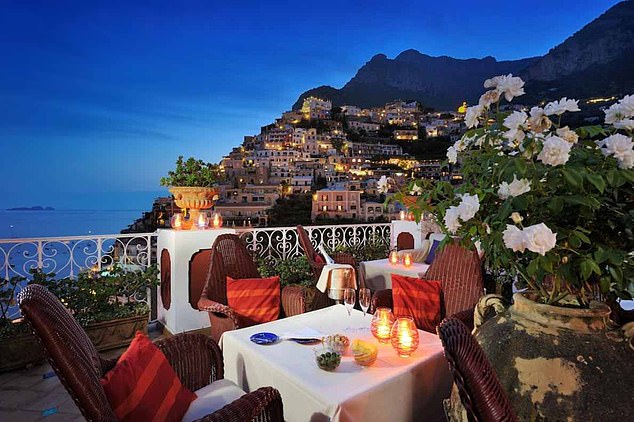 Beatrice will become an instant stepmother to Edo’s two-year-old son, Christopher Woolf, by his former partner, glamorous architect Dara Huang, who said: ‘I wish the best for Edo and Beatrice and look forward to uniting our families.’

Friends of Mr Mozzi have scoffed at descriptions of him as a ‘£600 million property magnate’. While he does have two property firms, neither has to publish their profits because they have turnovers of less than £10.2 million and assets below £5.1 million.

Whatever his personal wealth, there was no shortage of comforts on the blissful trip to Positano earlier this month. A junior suite with a sea view at Le Sirenuse costs about £3,000 a night. 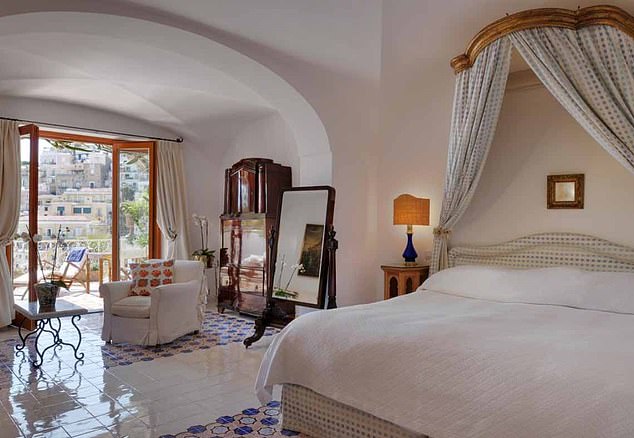 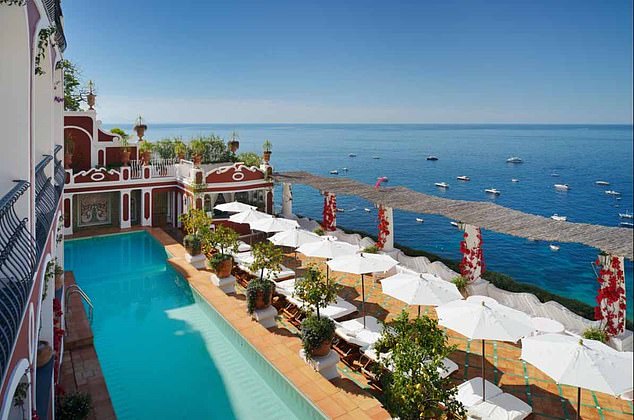 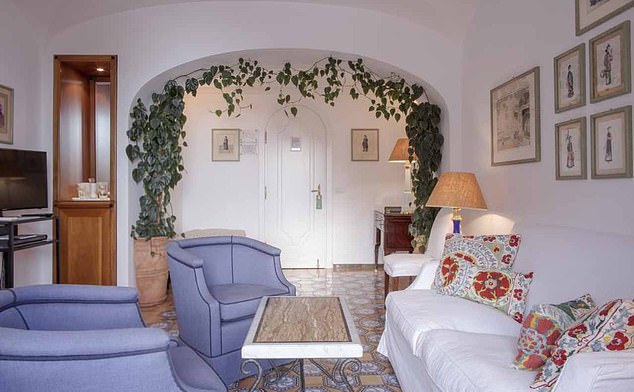 A light and airy seating area in one of the rooms at the hotel which costs £3,000 a night 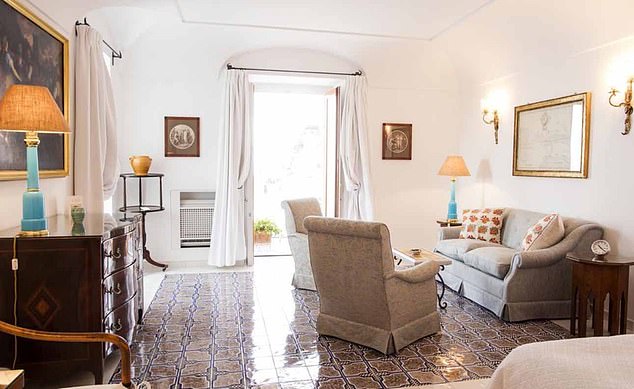 A spacious seating area with doors opening onto the coastline. For Beatrice, a friend added, a proposal at the age of 31 was doubly welcome after watching her younger sister Eugenie beat her to the altar last year

As well as Meghan, famous guests at the hotel include actors Sienna Miller, Hugh Grant and Reese Witherspoon. Eugenie and her fiancé Jack Brooksbank stayed there before their wedding.

There has been speculation that Beatrice and Edo’s marriage next year will be at either St George’s Chapel at Windsor Castle, or Westminster Abbey, but another possibility emerged last month when the Duchess of York was seen during a trip to Tuscany.

An Instagram picture with the Duchess that was posted by her indiscreet chauffeur had a tag to Villa Cetinale, once owned by the late Lord Lambton, the disgraced peer caught in a tabloid sting with prostitutes and cannabis. The villa costs £23,000 a week to rent and offers a special wedding package. 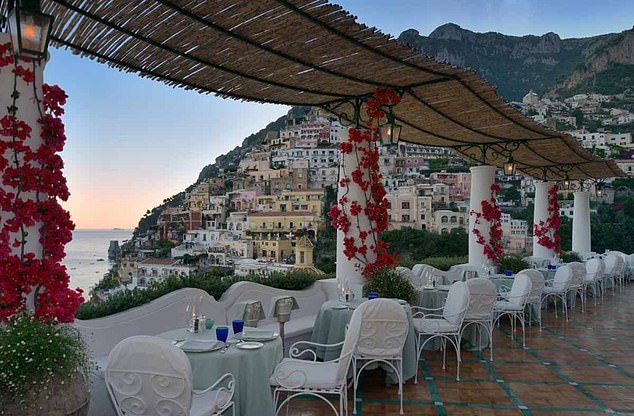 Famous guests at the hotel include actors Sienna Miller, Hugh Grant and Reese Witherspoon. Eugenie and her fiancé Jack Brooksbank stayed there before their wedding

Intriguingly, the driver also tagged American Brenda Babcock and a company called Iles Events in his Instagram post, both of which specialise in destination weddings to Tuscany.

As for where Beatrice and her new husband will live, one possibility is Nottingham Cottage, the property at Kensington Palace recently vacated by the Duke and Duchess of Sussex.