A mesmerising ancient town in Algeria and a lone skier captured in California: The stunning aerial images that scooped top honours at this year’s Drone Awards

The winners of this year’s Drone Awards have been revealed after judges sifted through more than 4,500 entries.

The contest was open to both professional and amateur drone photographers who submitted images to the following categories – abstract, nature, people, sport, wildlife and urban.

Jacek Deneka from Poland took home the 2019 ‘Photographer of the Year’ prize with his snowy action shot titled A Shoal of Colorful Fish.

The stunning image shows cross-country skiers speeding along during a 50km race in the picturesque district of Jakuszyce.

Deneka will be recognised at an award ceremony in Siena, Italy, on October 26, and the winning images will go on display throughout November in the city as part of the Siena Awards Photo Festival. Scroll down and soar over some of the top shots…

Jeremiasz Gadek homed in on this unusual heart-shaped cluster of trees in a vivid-yellow field of oilseed rape in Poland. The drone photographer says the image communicates ‘the concept of love for nature’. This image was named the winner in the ‘nature’ category 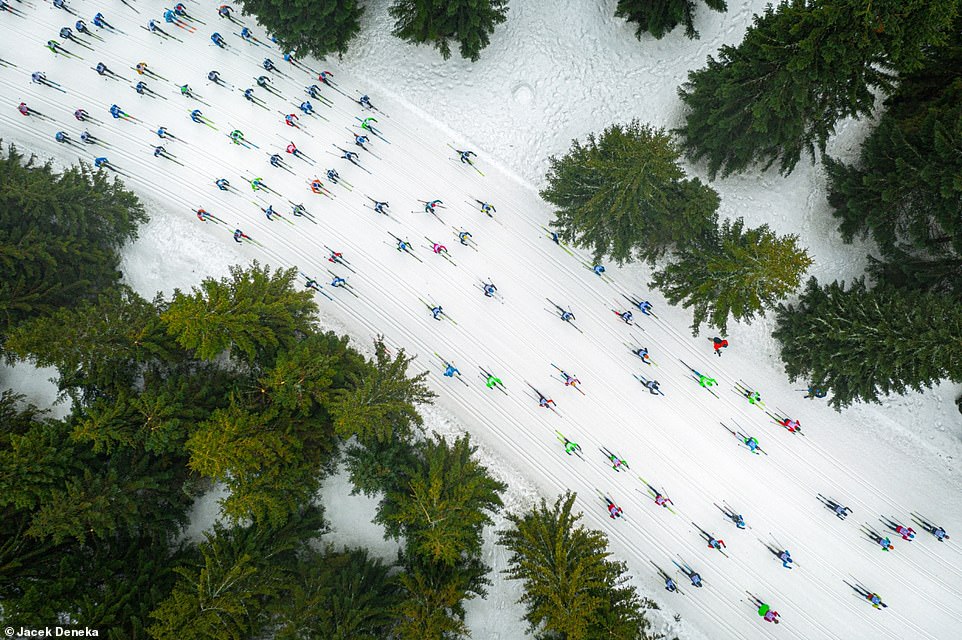 Jacek Deneka titled this snowy action shot A Shoal of Colourful Fish. Explaining why he picked the name he said: ‘The photo shows cross-country skiers during the Ski Racing Festival ‘Bieg Piastów’ competition in Poland. From the sky, the skiers look like a shoal of colorful fish floating among coral reefs.’ The eye-catching photo landed Jacek the coveted Photographer of the Year prize 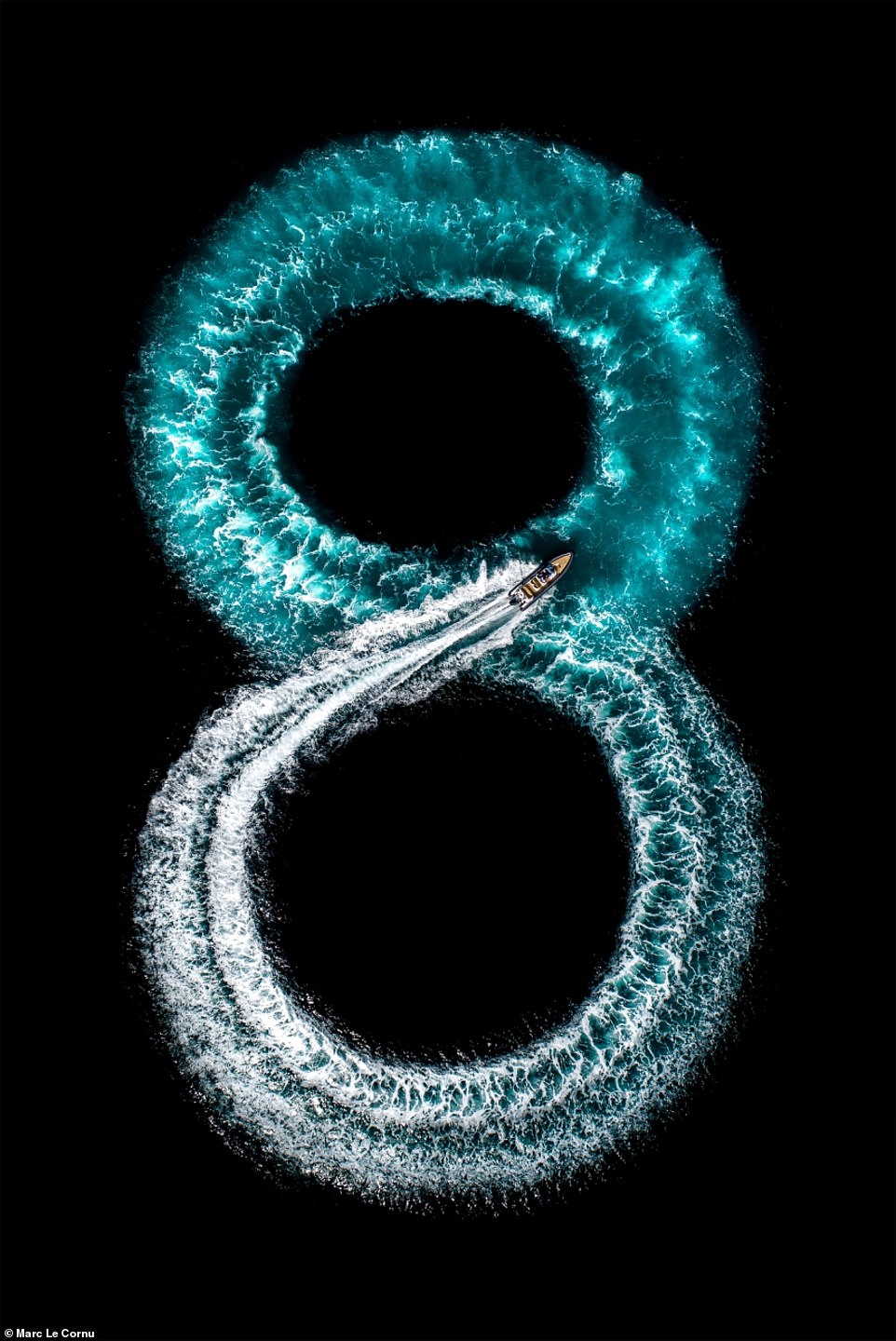 Marc Le Cornu said of this shot taken in the Channel Islands: ‘To achieve this shot I was flying a drone from the passenger seat of the Jersey Seafaris boat. From there I succeeded in capturing a perfect figure of eight, which also represents the infinity symbol.’ This image was named the winner in the ‘abstract’ category 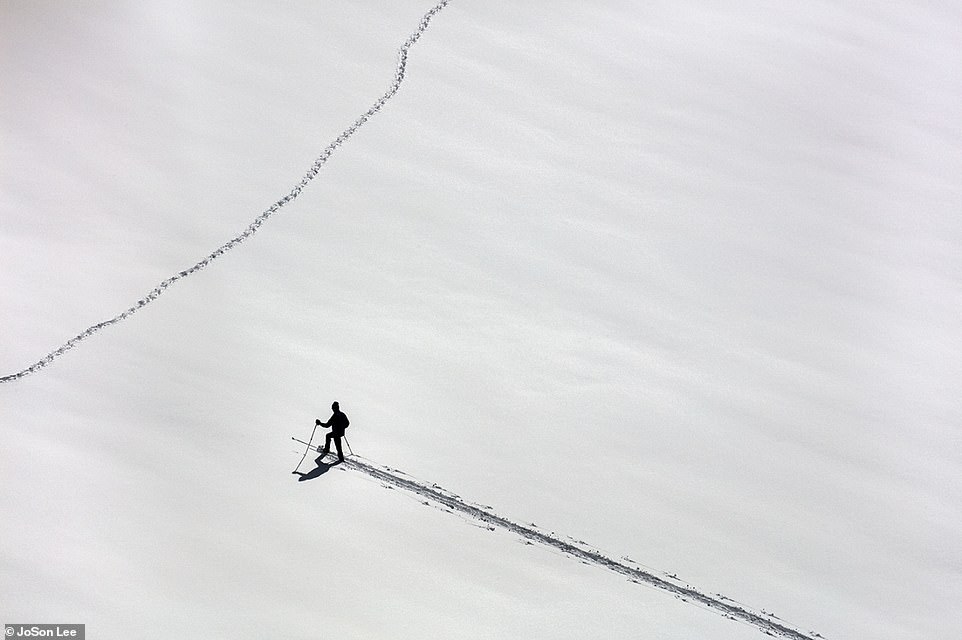 This drone shot of a solitary skier crossing a snow-covered slope in Lake Tahoe, California, was taken after a snowstorm, during a ‘seeming moment of tranquillity’. This image was named the winner in the ‘sport’ category 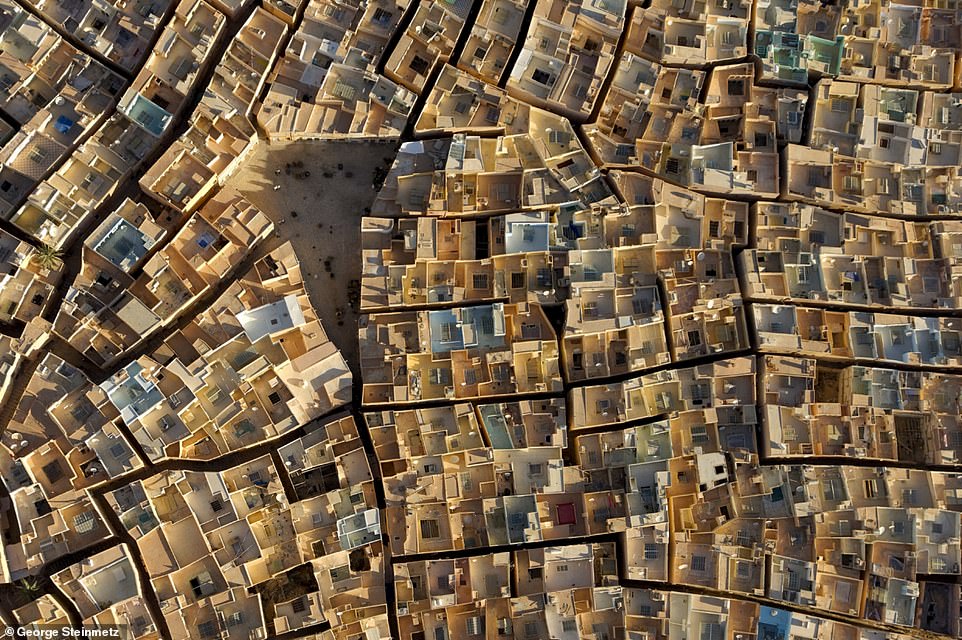 An aerial view of Beni Isguen, which photographer George Steinmetz says is the ‘most conservative and exquisitely preserved’ of the ancient hill towns in Ghardaia, Algeria. He adds: ‘Laid out like a mosaic, the residents carefully maintain their antique pastel-painted homes, which often feature a walled roof-top area for laundry and outdoor sleeping on hot Saharan nights.’ This image was named the winner in the ‘urban’ category 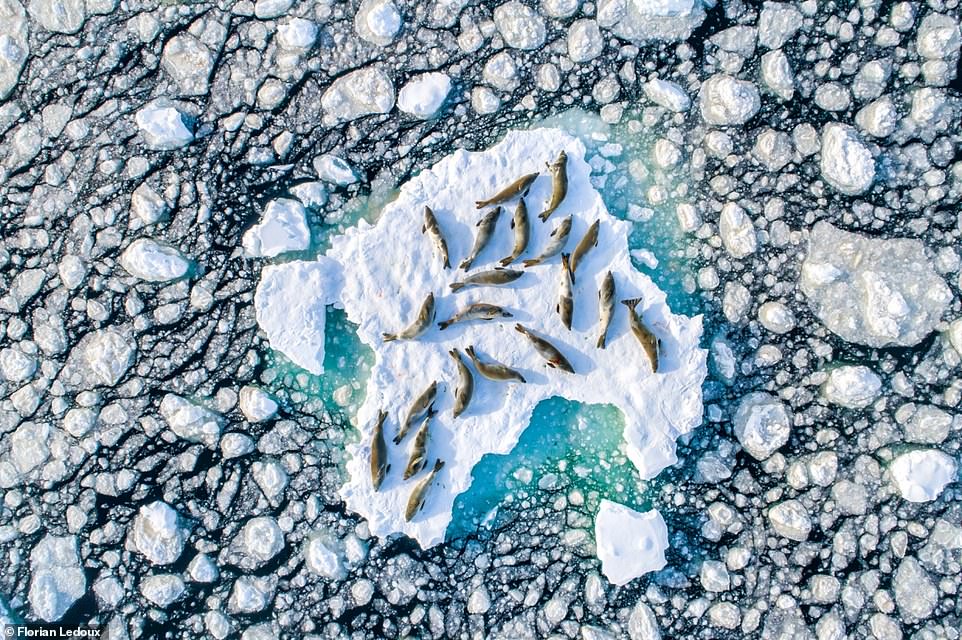 A group of crabeater seals are seen resting on the ice of the Antarctic Peninsula between dives for food. This icy image was named the winner in the ‘wildlife’ category 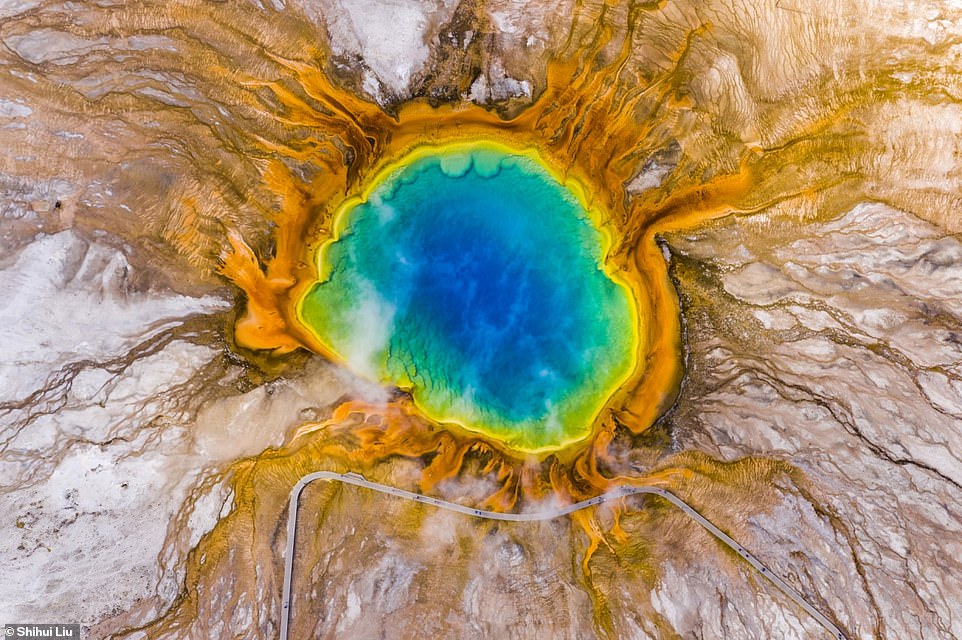 A striking aerial photo of the Grand Prismatic Spring in Yellowstone National Park, the biggest hot spring in the U.S. and third largest in the world. This image was runner up in the ‘nature’ category 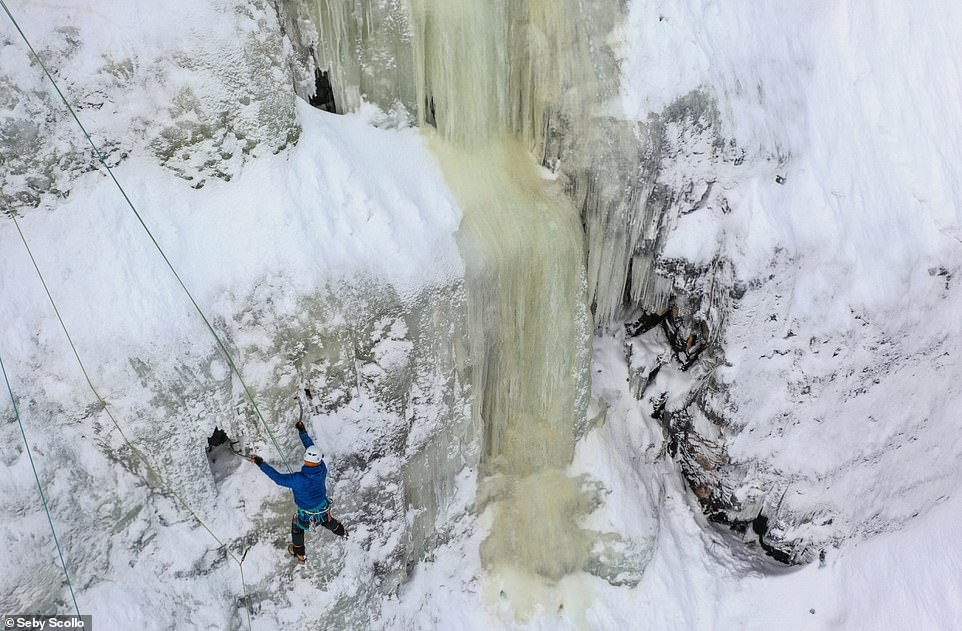 A climber clings to a wall of ice situated in the middle of the white Finnish valleys. Drone photographer Seby Scollo says during the winter many kinds of extreme sport can be found in the area. This image was the runner up in the ‘sport’ category 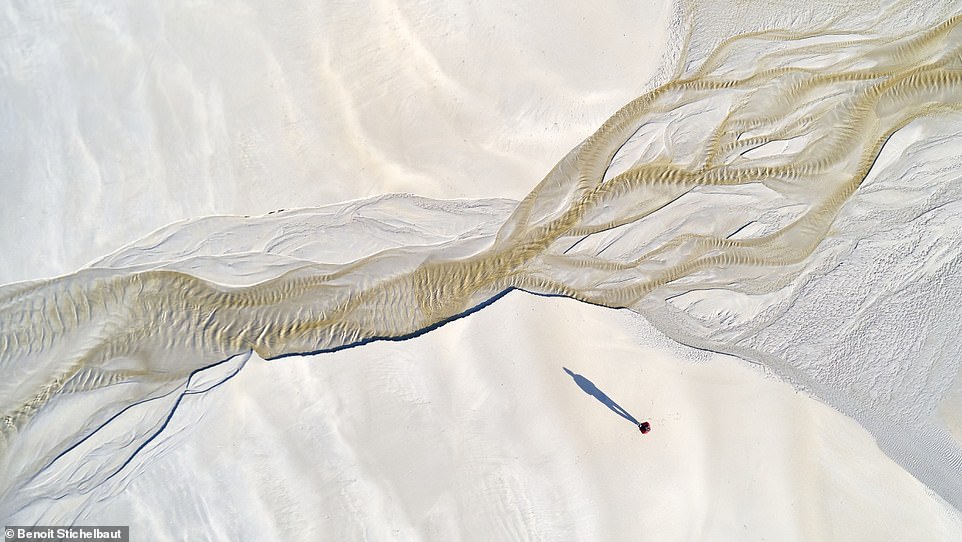 In Brittany, at Dourveil beach, a stream flows into the sea and leaves traces on the sand at low tide. Benoit Stichelbaut says that his ‘solitary figure stands out’ in this scenery while he pilots the drone. This image was a runner up in the ‘people’ category 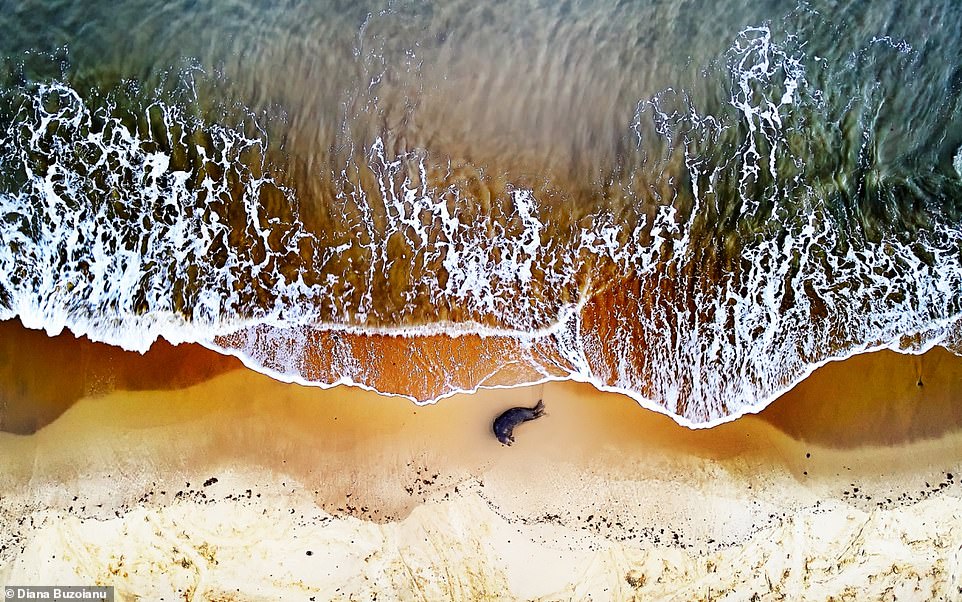 Diana Buzoianu ventured to the English coast on a ‘harsh winter day’ to capture this aerial photograph showing a seal looking up from the golden sands. This image was a runner up in the ‘wildlife’ category 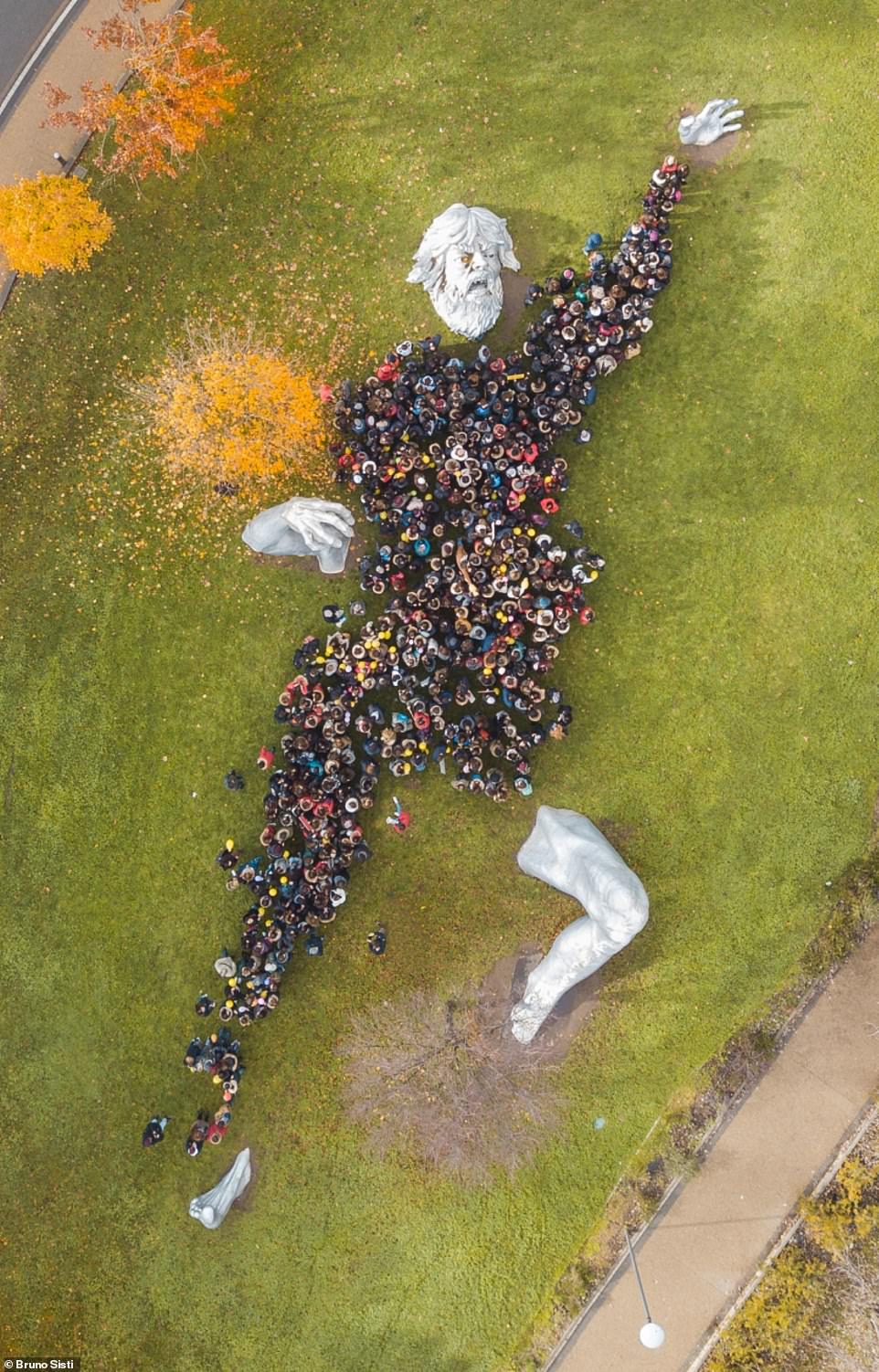 Students in the ancient Italian city of Viterbo helped drone photographer Bruno Sisti capture this quirky shot. The image was named the runner up in the ‘abstract’ category