Whether estuaries, flowing rivers, marshes or lagoons, this stunning photography series showcases how water can transform the landscape.

Through a collection of abstract aerial images, photographer Milan Radisic’s beautiful subjects would look at home in a modern art galley.

They include the vibrant reds of a mud storage ponds and the apparent purples of a veiny salty marsh – all shot from above in intense clarity.

Shooting the series, ‘Waters.Shapes.Earth.’, has taken the 50-year-old to 11 countries – including Iceland, Spain, Italy, Serbia and his native Hungary.

The idea for the series came to prize-winning photographer Mr Radisic while he was shooting a project on drained fishponds.

Tidal area covered with algae, moss and grass in France. The project called ‘Waters.Shapes.Earth.’ took the photographer to 11 countries including Iceland, Spain, Italy, Serbia and his native Hungary 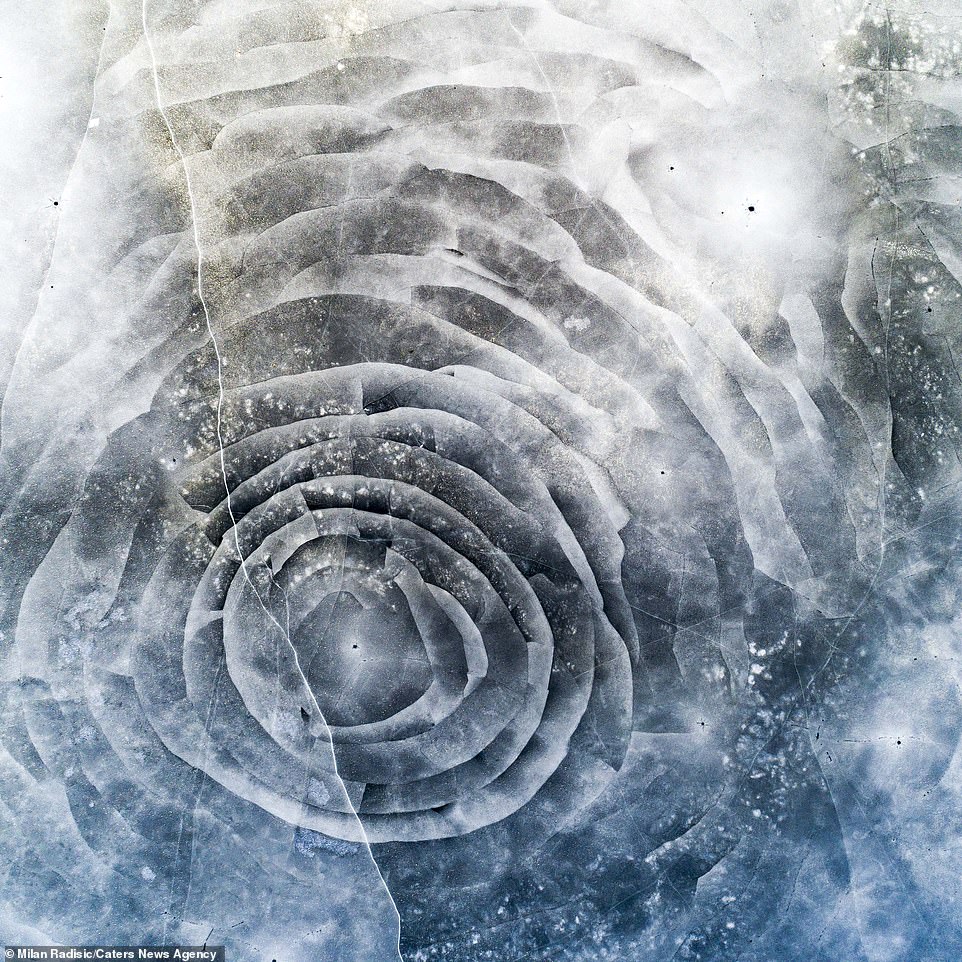 Rose shaped icecrack in Sweden. Through his work, photographer Milan Radisic hopes to show his own ‘unique vision of the world’ 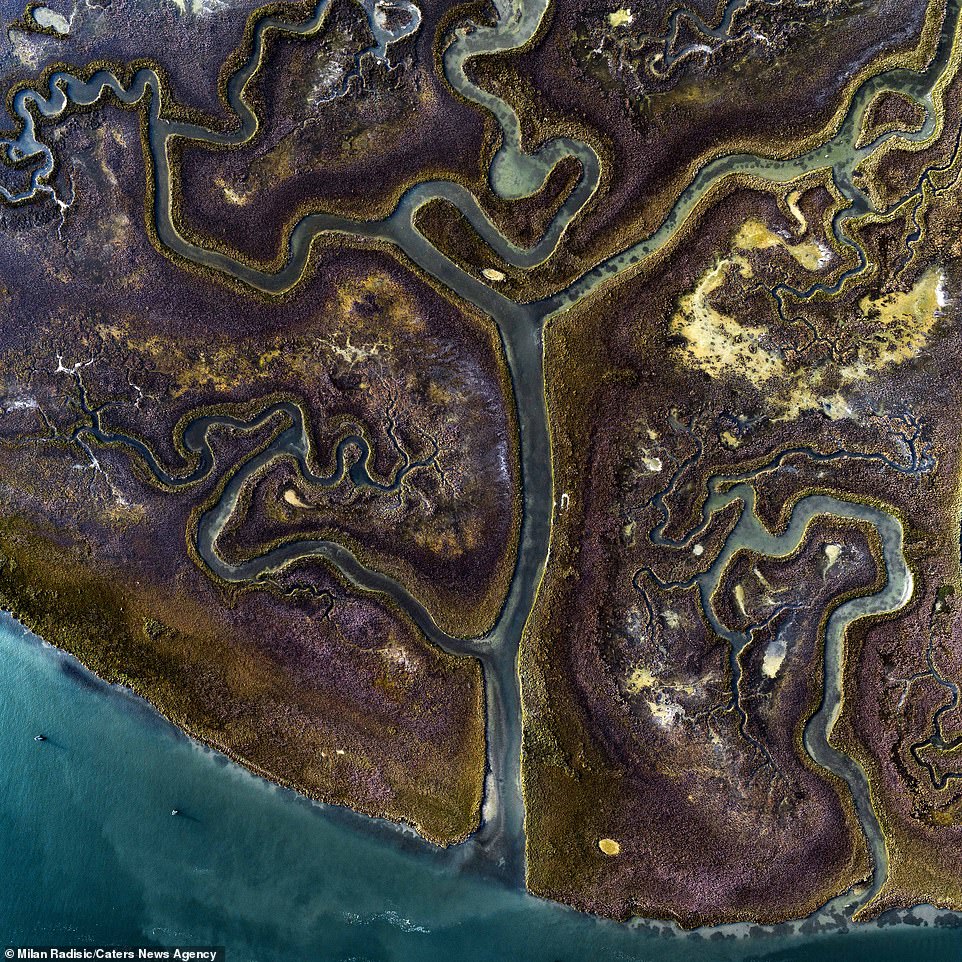 Marsh land, grasses from a tidal swirl in the salt marsh of Venice, Italy. Mr Radisic plans to travel to the likes of Greece, Albania and Montenegro to expand the series of stunning images 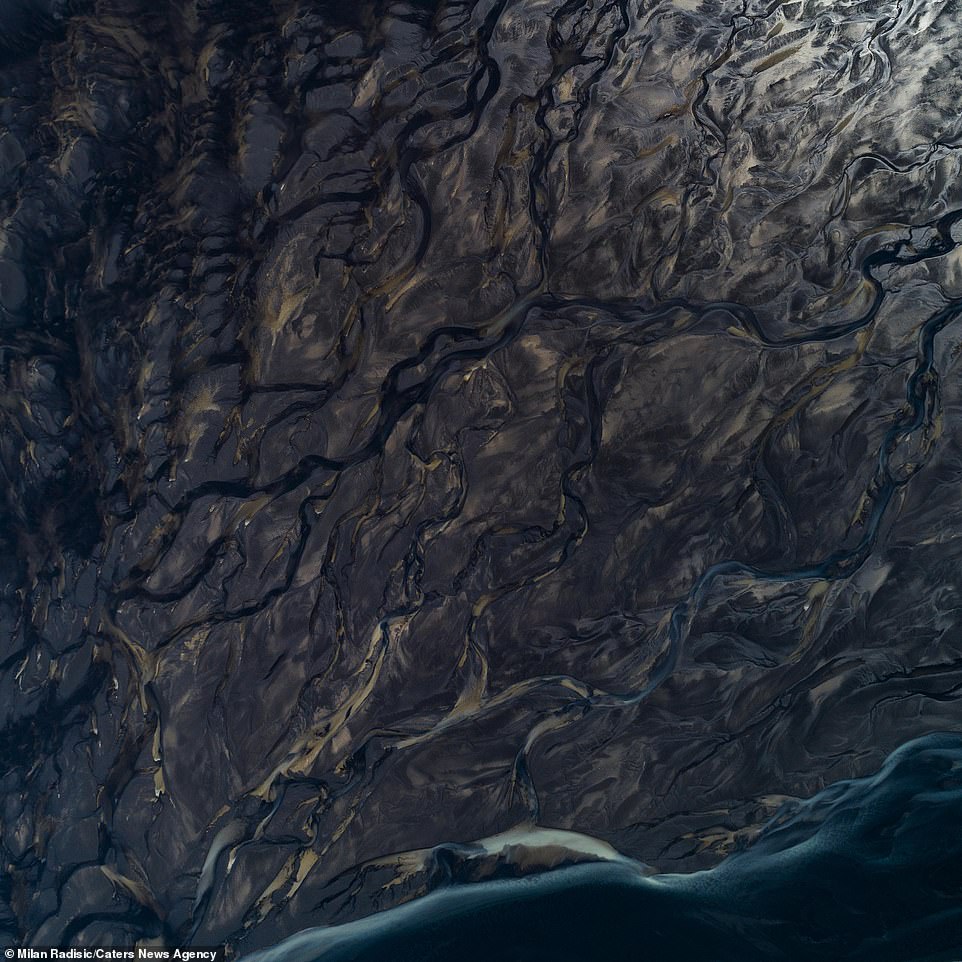 Glacial rivers in Iceland. By looking at the fragility of some of his subjects, the photographer hopes others will rethink their approaches to conservation and to see the beauty in the natural world 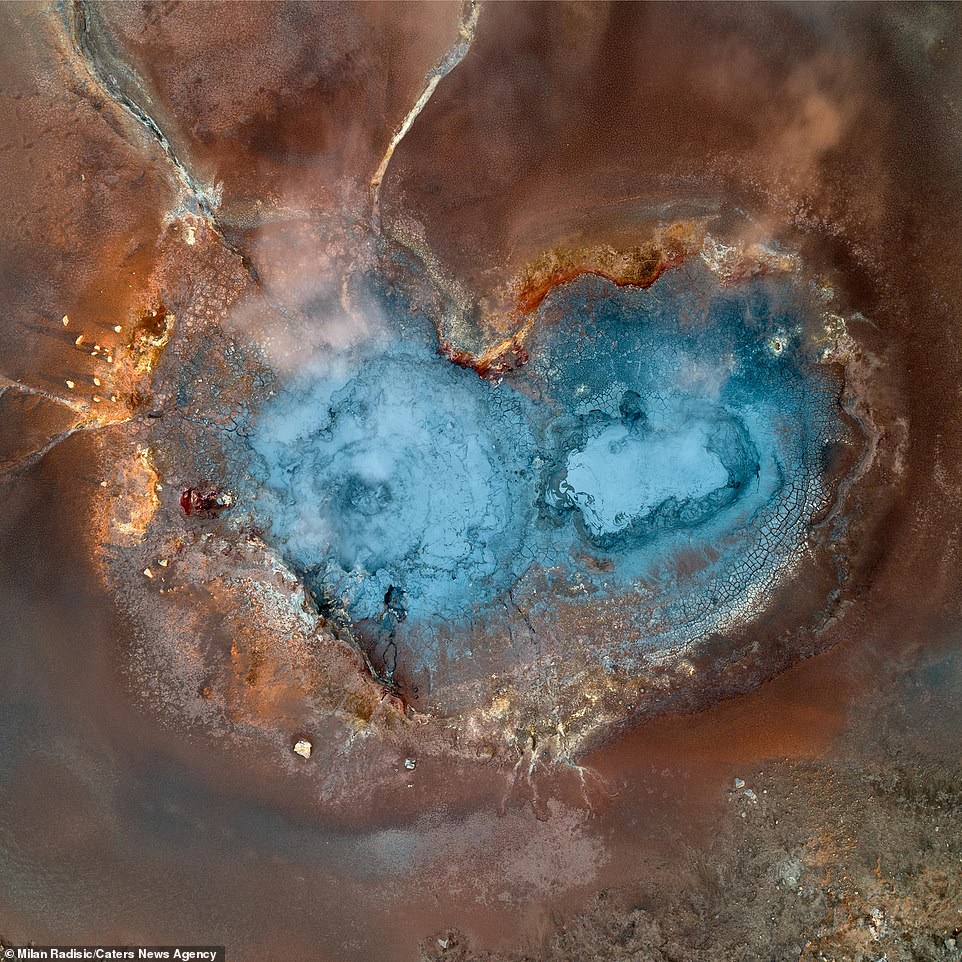 A rusty red and bright blue of a geothermal hot spring in Iceland. The country has many hot springs including the Blue Lagoon is a geothermal spa in southwestern Iceland in a lava field near Grindavík on the Reykjanes Peninsula 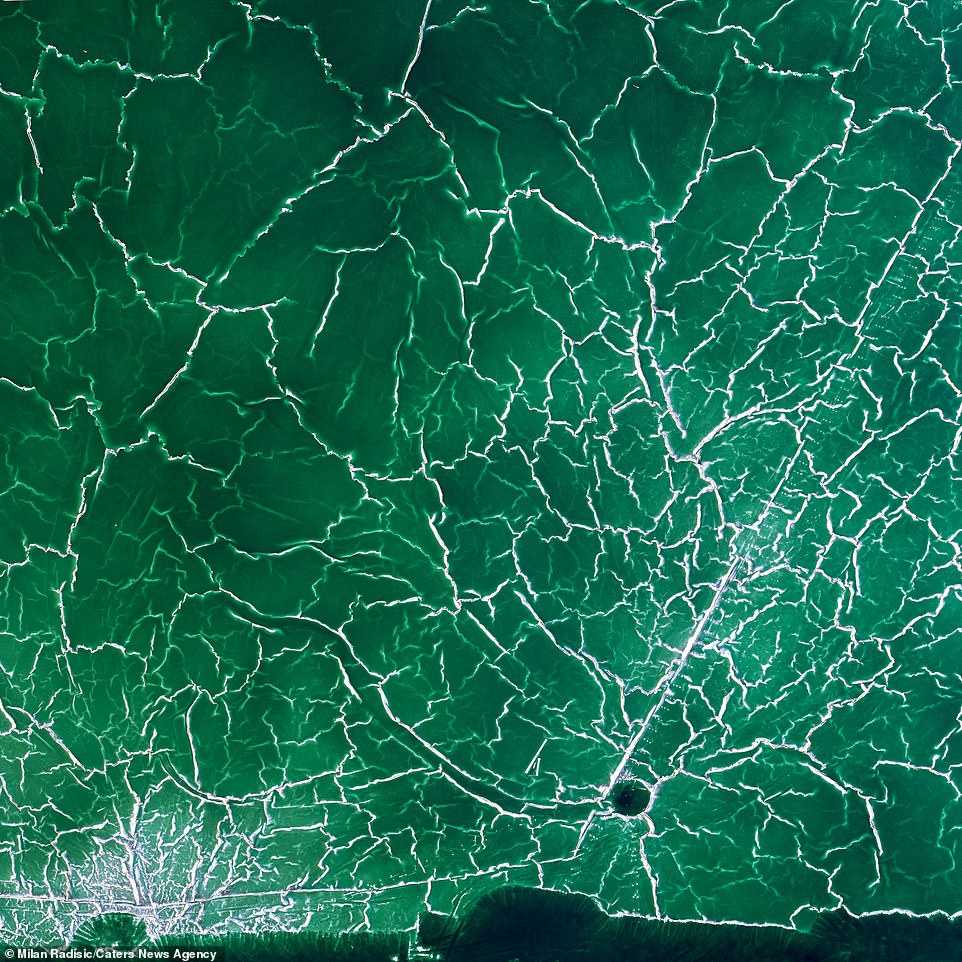 Radioactive water and textures at an abandoned pond used for the disposal and stacking of phosphogypsum with shallow, but highly toxic radioactive green water in Huelva, southern Spain 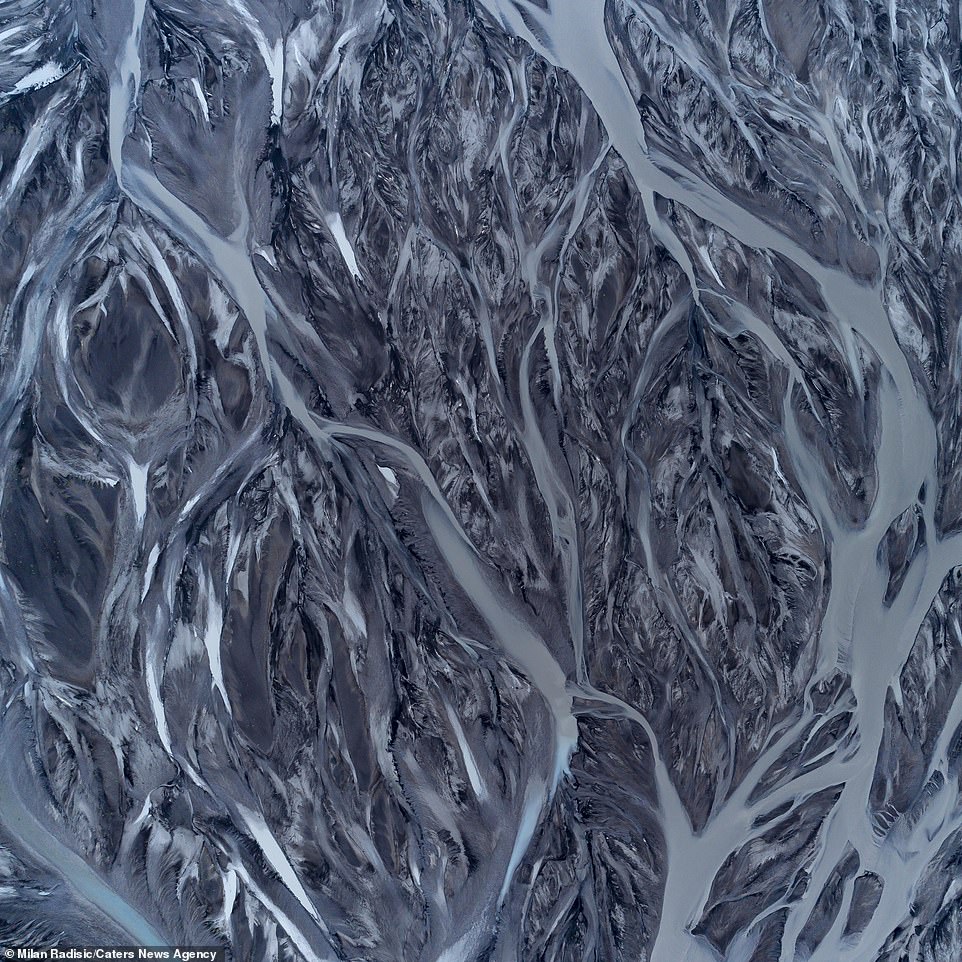 This images shows shapes made by Kudafljot River in Iceland, which is one of the largest glacier rivers in the country. Photographer Milan Radisic, who lives in Budapest, Hungary, said: ‘Water is huge topic, and there are so many sites to work on. The water crisis is present everywhere’ 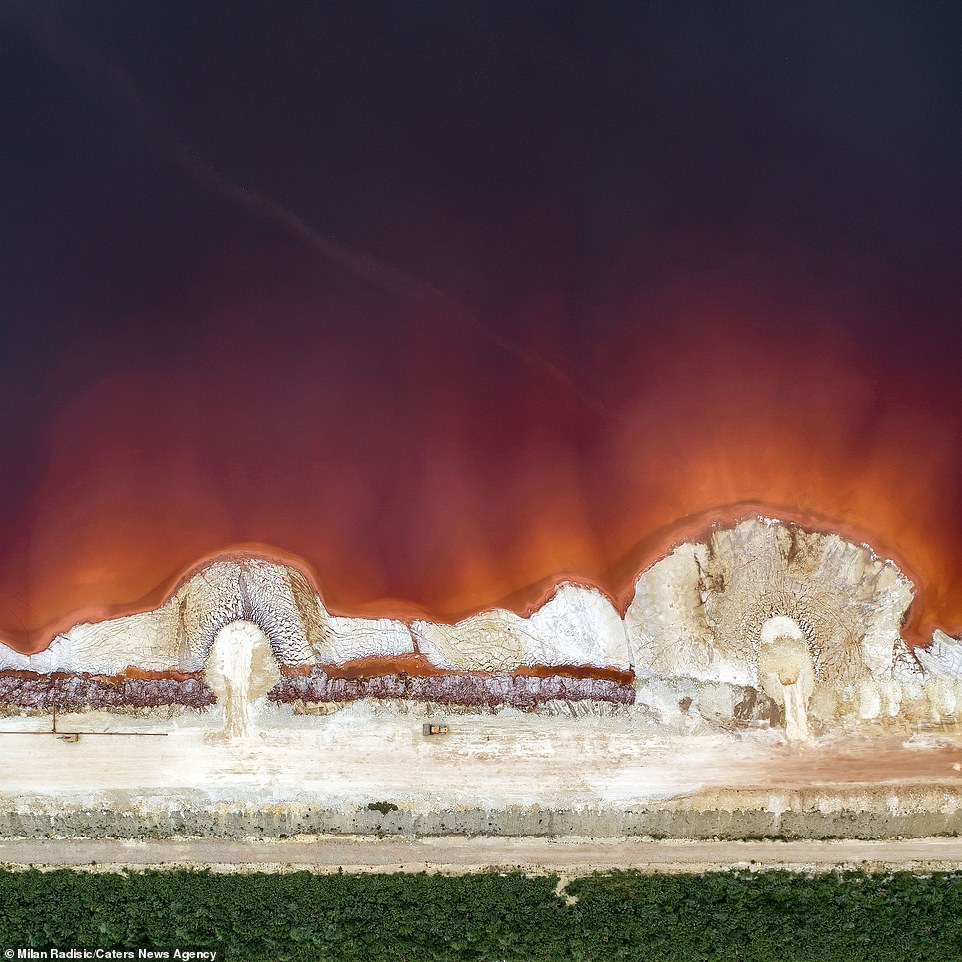 A red mud storage pond is pictured alongside waste water from aluminium production in Galicia, Spain, which is a source of fluoride pollution and acid soil 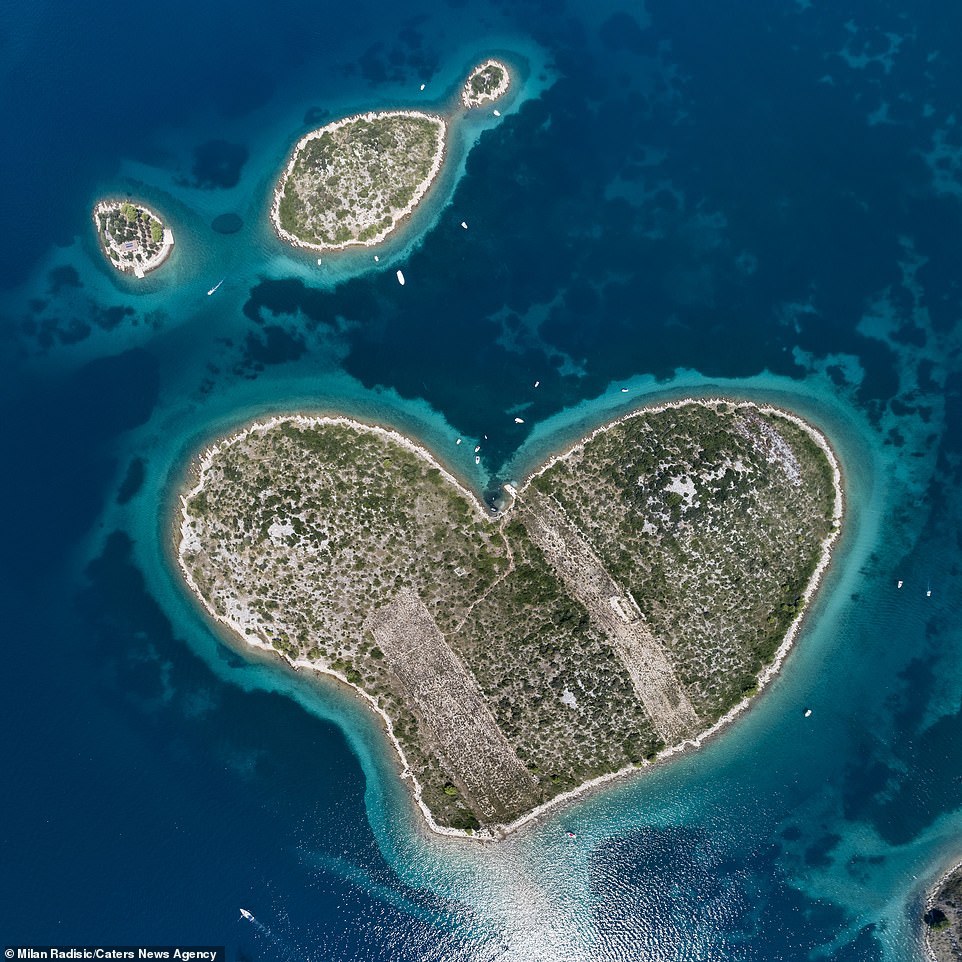 Galesnjak Island in the shape of a heart in Croatia, which is one of the world’s few naturally occurring heart-shaped objects 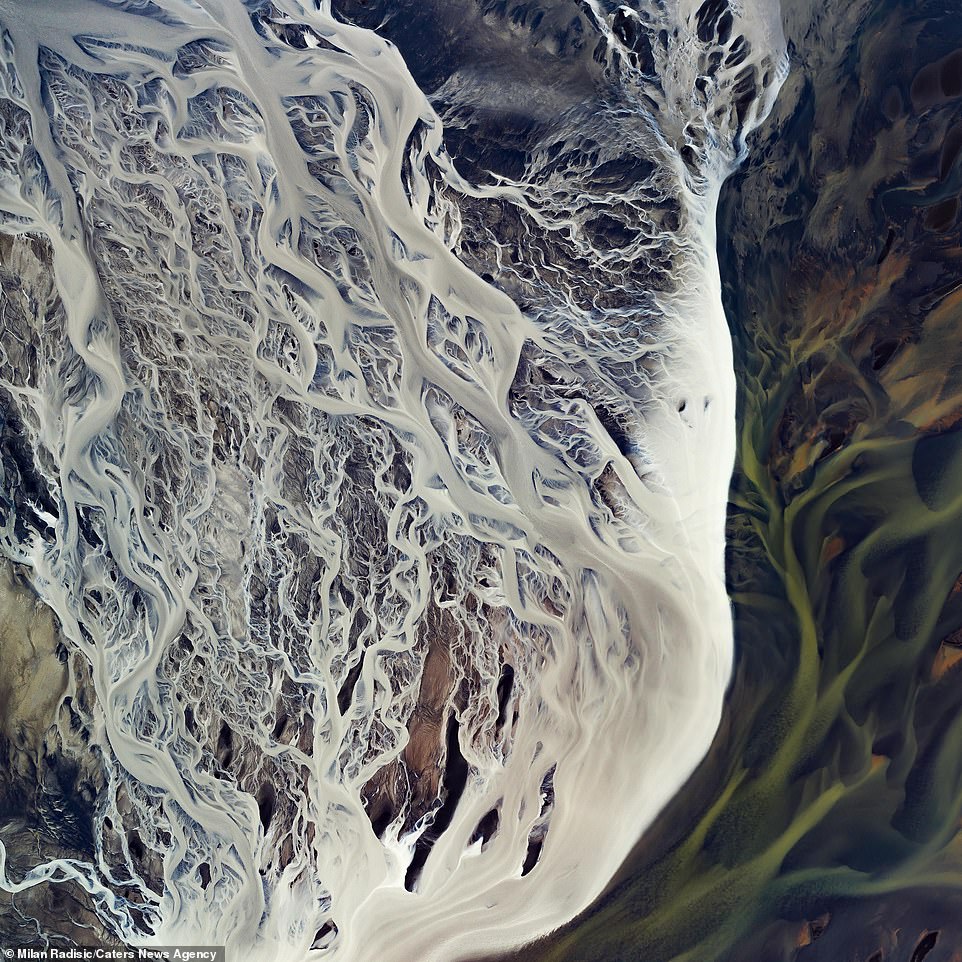 Confluence, where a tributary joins a larger river, of a glacial river in Iceland. Discovering such abstract locations requires hours of research mainly involving a deep search through satellite imagery 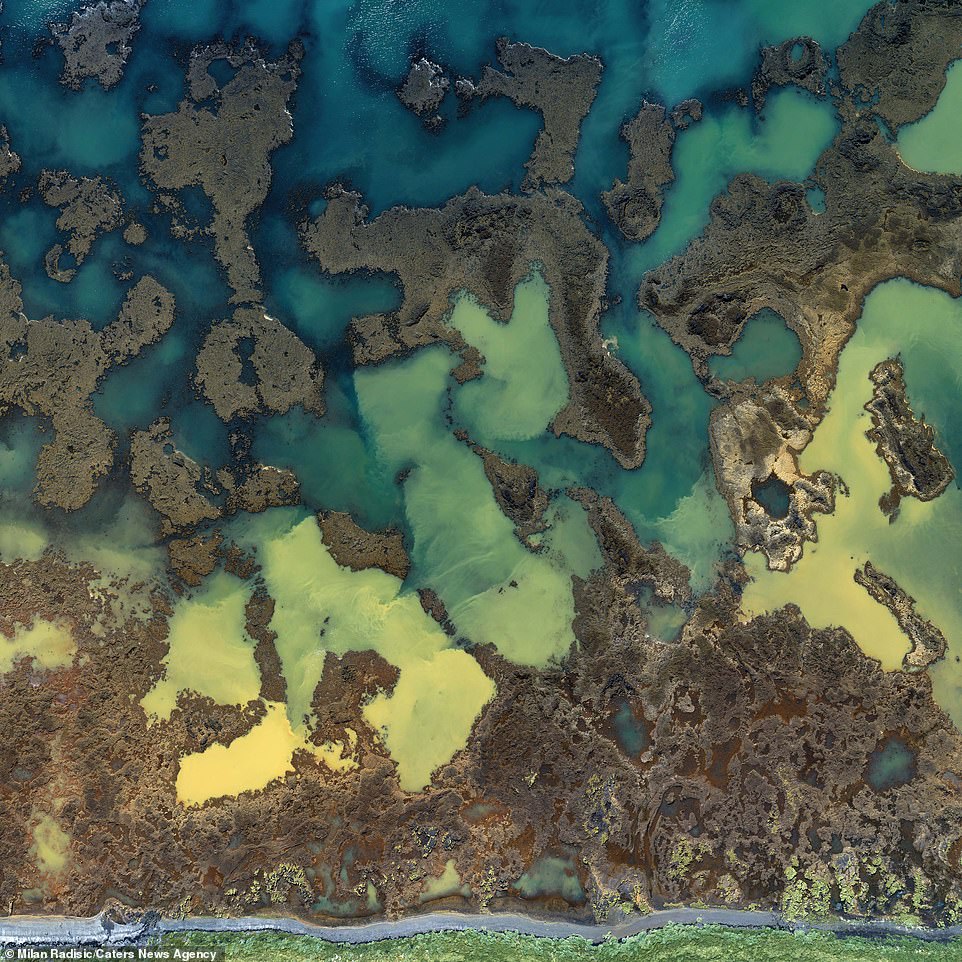 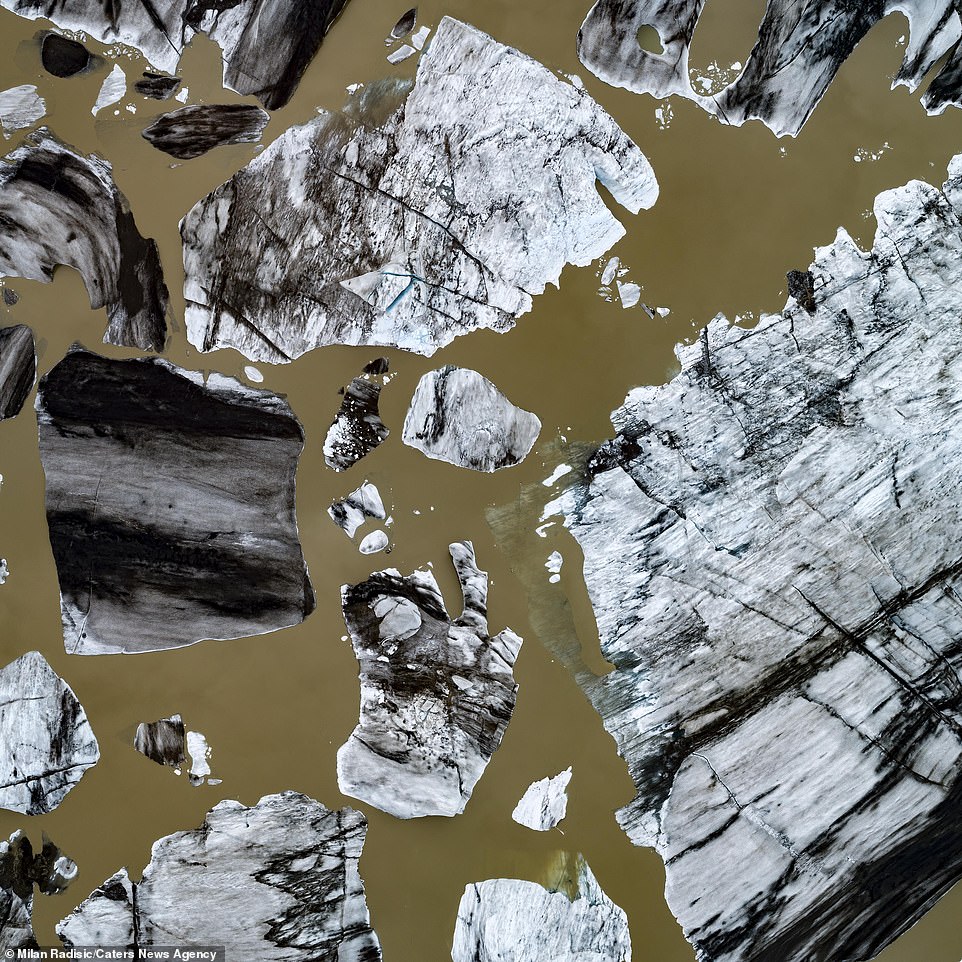 Floating icebergs in Iceland are pictured here. Once the artist has selected a location, Mr Radisic then uses what he calls a ‘lawnmower technique’ to shoot the surrounding area 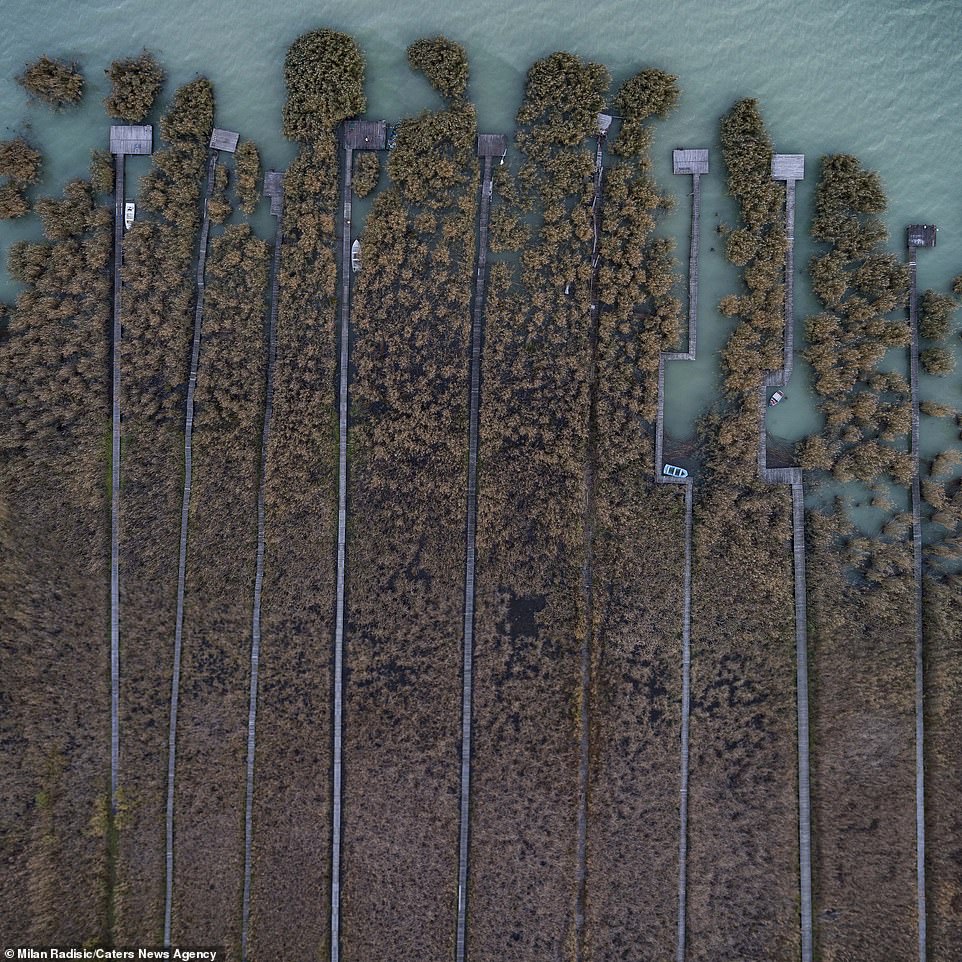 Piers in Lake Balaton, is Mr Radisic’s home country of Hungary. This technique involves flying over a strategic, pre-determined point, taking a number of images that can then be overlapped 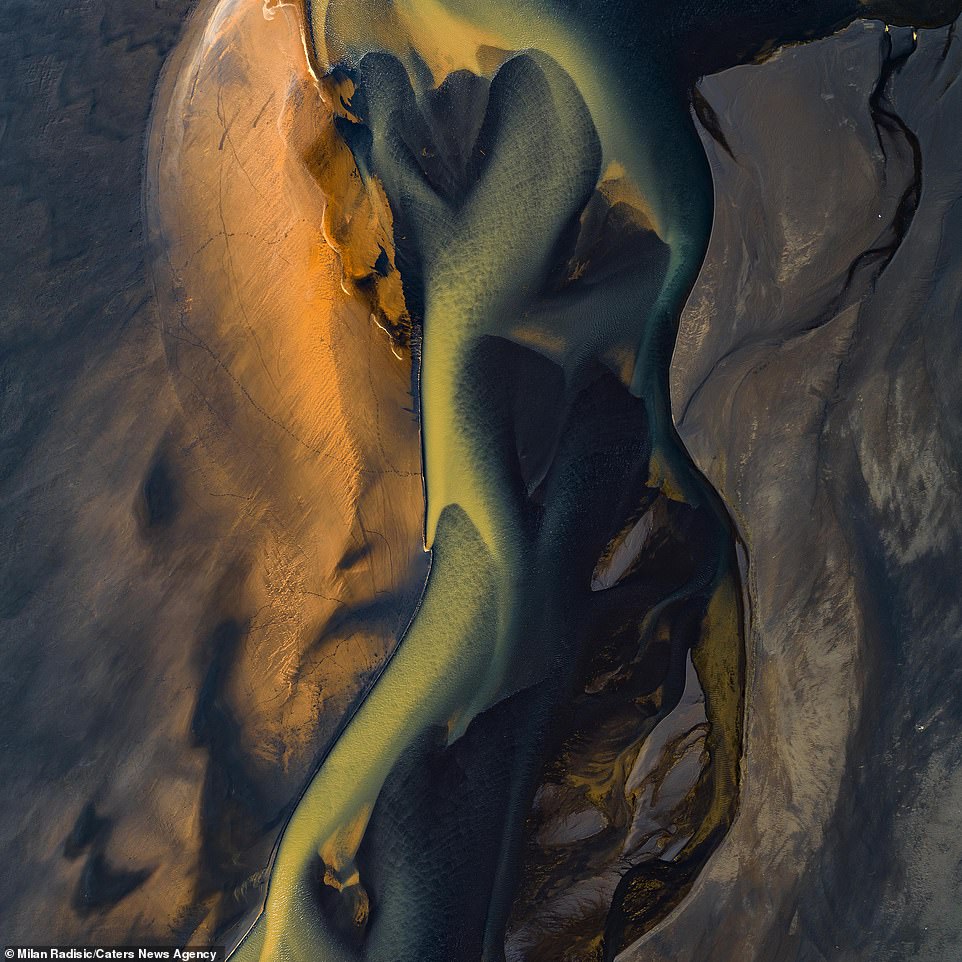 Where the Affall River meets the Atlantic Ocean, there is a confluence of three coloured tributaries that wind through various farmlands. Together they casually flow to the ocean across the black sandy beach in the Landeyjar area of southern Iceland 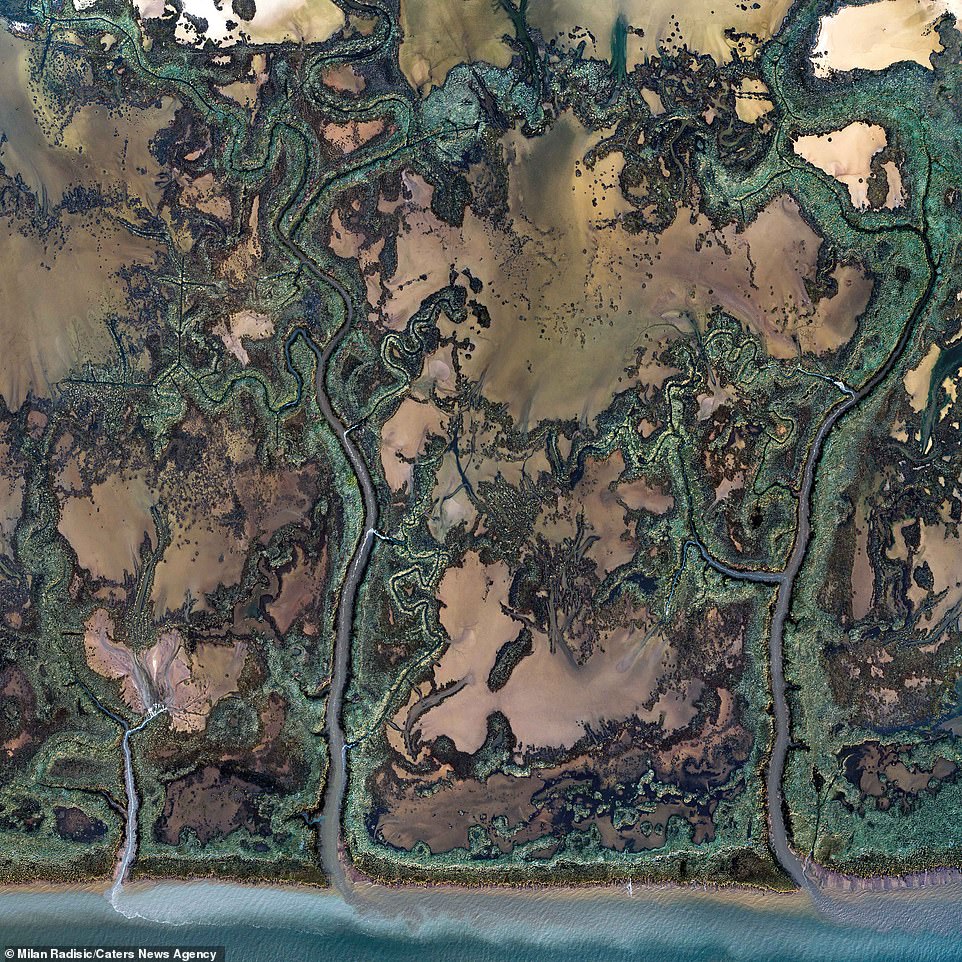 The tidal area of Rio Tinto in Huelva, Spain. Through this technique, the finished works can contain up to 140 million pixels 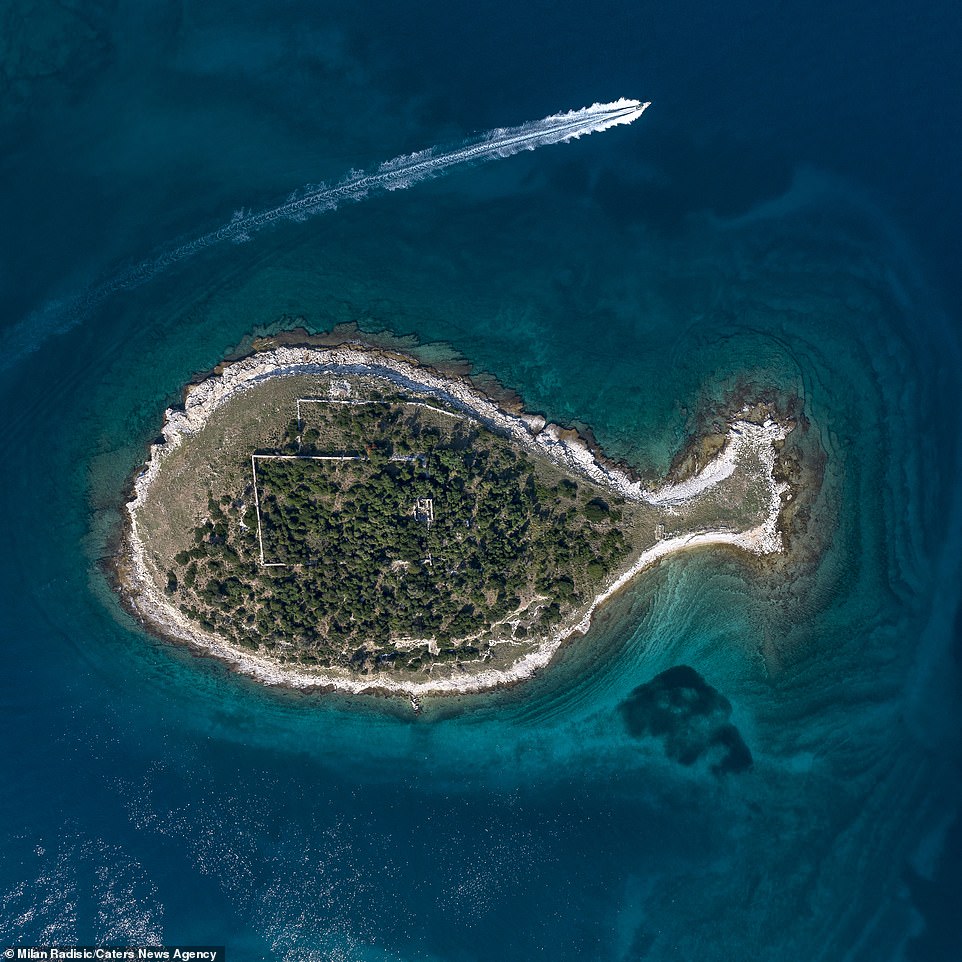 Island in the Brijuni Archipelago, Croatia, makes the shape of a fish. The island is in a group of 14 small islands in the Croatian part of the northern Adriatic Sea 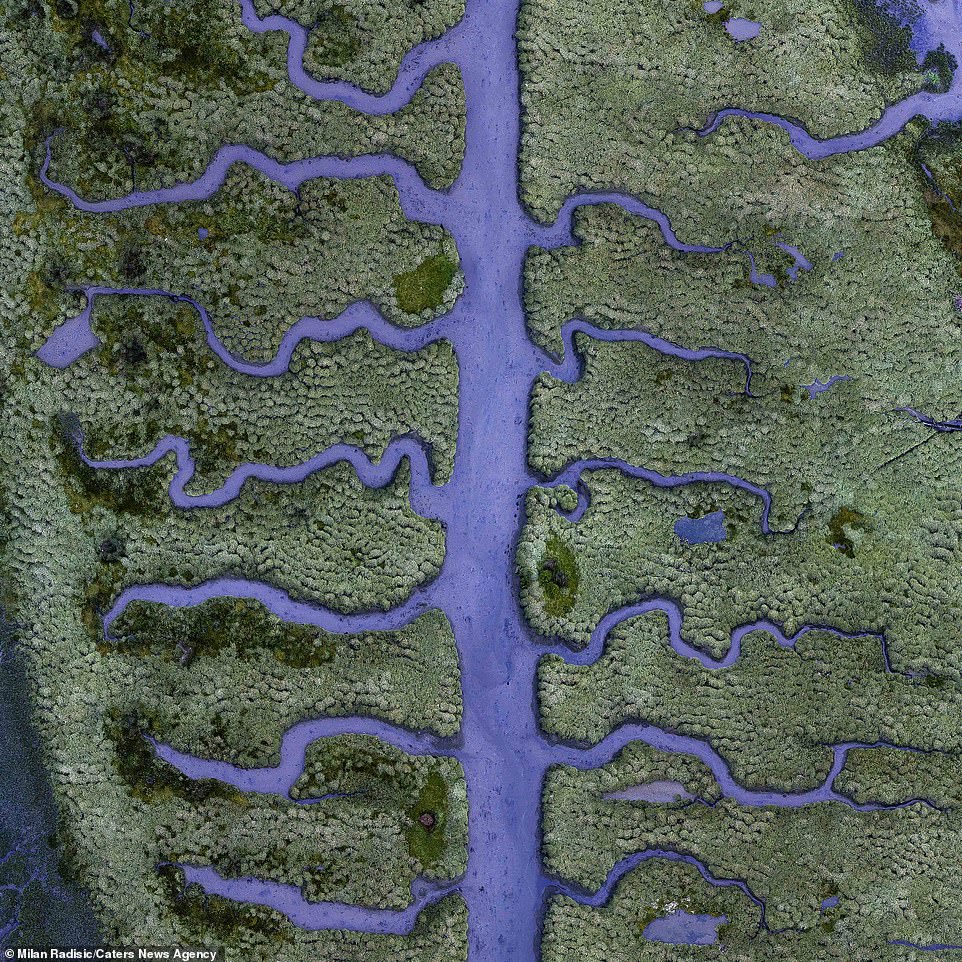 Salty marsh, near Coruna in northern Spain. Photographer Mr Radisic said: ‘I saw fragility of the water and then this came together with my passion for flying’ 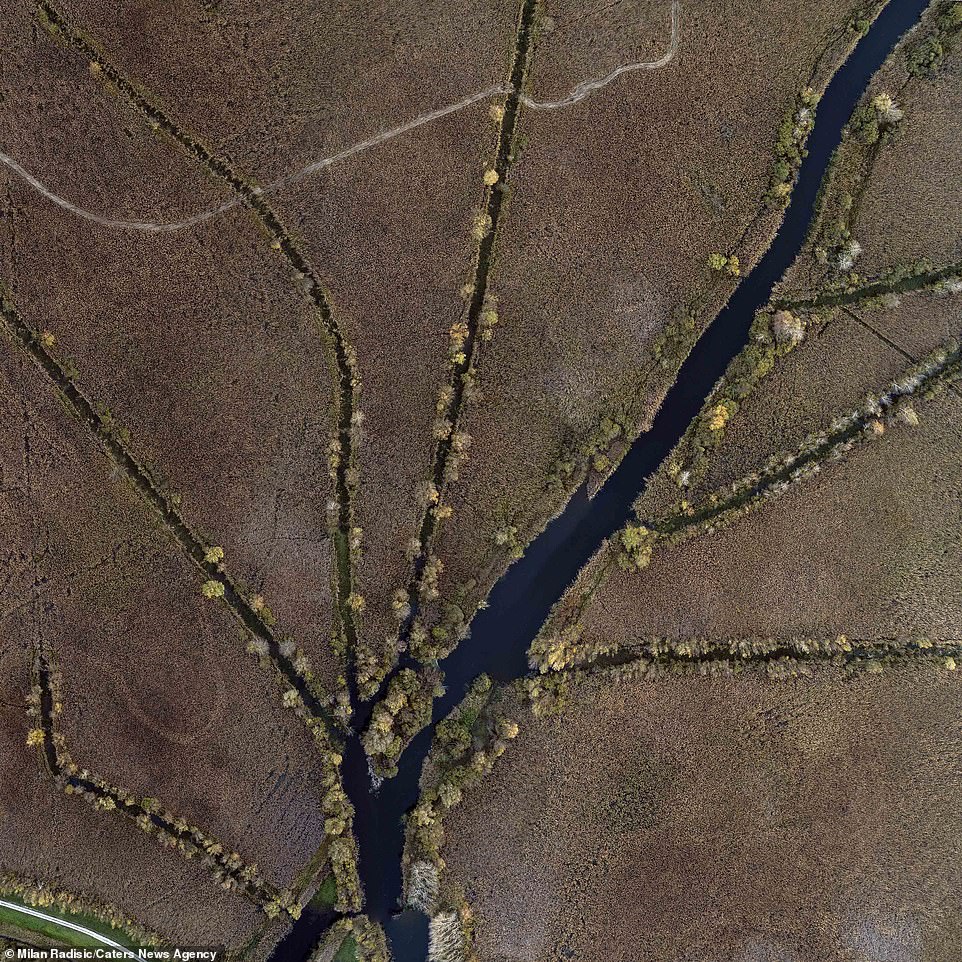 Network of channels in Estuary of River Zala, Hungary. Mr Radisic said: ‘I could use this new, aerial perspective to express my passion for water, to reveal unseen places, to surprise people. ‘It would be a global topic, and I knew the story I had to tell’ 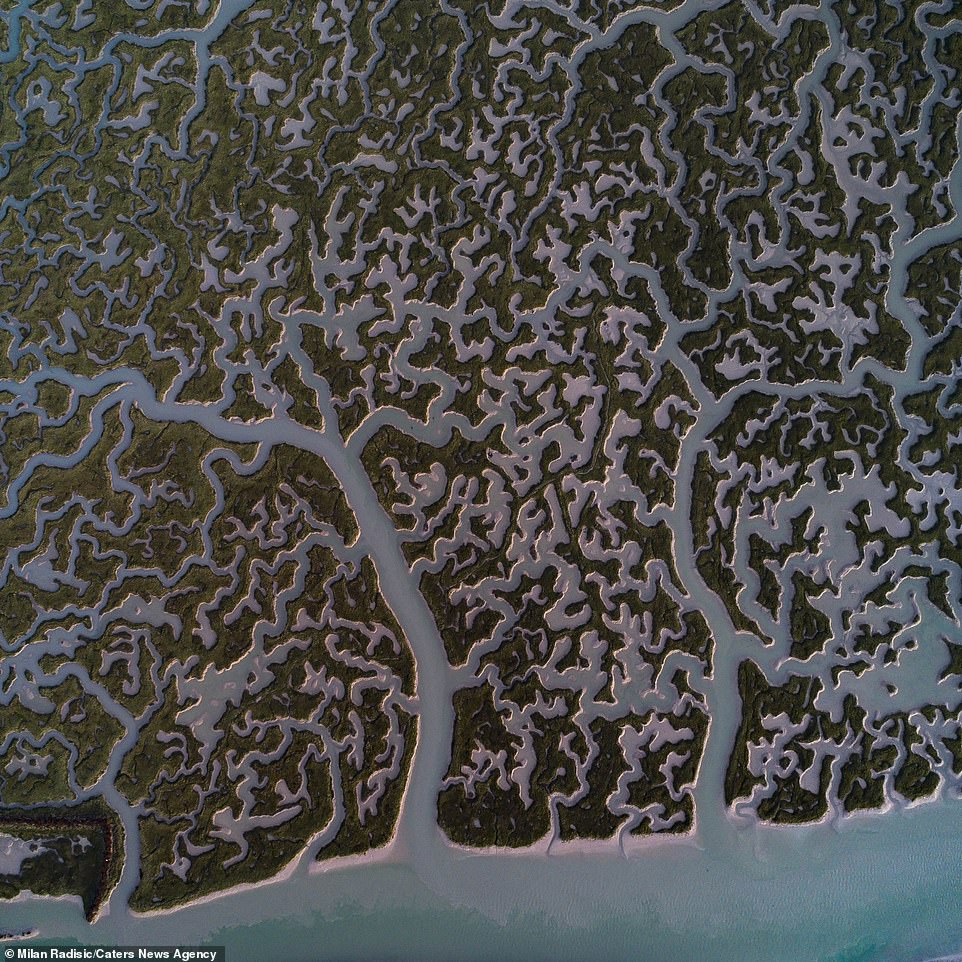