A beautiful image of Jupiter taken by the NASA Hubble telescope has captured the formation of an almighty storm in the planet’s northern hemisphere.

NASA says the storm is a ‘bright, white, stretched-out storm moving at 560 kilometres per hour’ at mid-northern latitudes.

Storms in this region are very common but this one appears different, as it has more structure and could be forming into a permanent feature.

‘Researchers speculate this may be the beginning of a longer-lasting northern hemisphere spot, perhaps to rival the legendary Great Red Spot that dominates the southern hemisphere,’ NASA says in a statement.

Image of Jupiter taken by Hubble has captured the formation of an almighty storm in the planet’s northern hemisphere. it also shows Europa and the legendary Great Red Spot which is a strm bigger than Earth which has been raging for more than 350 years

Left of the image is Europa, the icy moon of Jupiter which is believed may harbour microbial life in its liquid oceans. Right of the image is the long white storm which NASA believes may one day rival the Great Red Spot in size

Jupiter is the biggest planet in the solar system, and it is believed the gas giant’s creation was crucial in allowing Earth, and life, to form.

The new image was taken when Jupiter was 405 million miles (653 million kilometres) from Earth and also captures the planet’s icy moon, Europa.

Europa is one of the most promising locations within the Solar System for alien life, as it has a liquid ocean lurking beneath its frozen crust.

NASA has even proposed a madcap scheme to use steam-powered robots to explore the world and look for signs of microbial life.

The bots, called SPARROW, would run on steam from ice that was collected by mining the surfaces of the moons they explore – rather than ‘dirty’ rocket fuel.

Hubble focused on Jupiter on August 25 and took two images, one using visible wavelengths of light to create a classical look at Jupiter, and another which combined various wavelengths, including ultraviolet, visible and near-infrared. 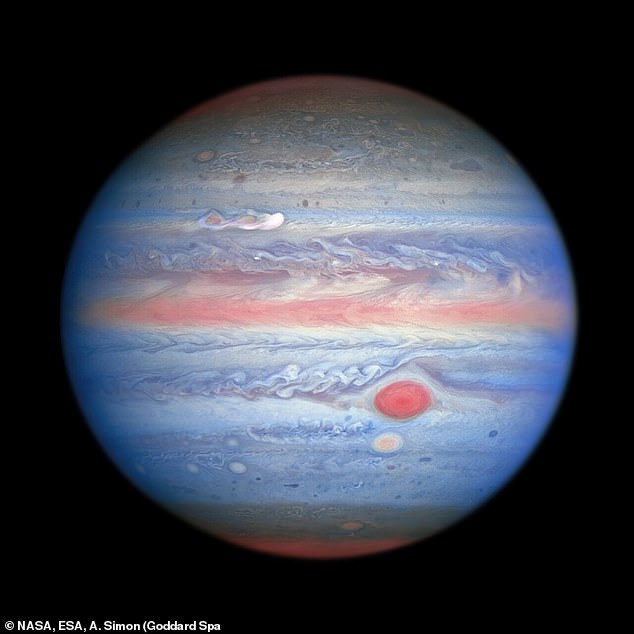 NASA says Hubble’s near infrared imaging, combined with ultraviolet views, provides a unique panchromatic look at Jupiter (pictured)  that offers insights into the altitude and distribution of the planet’s haze and particles. It also makes the gas giant look like a gobstopper 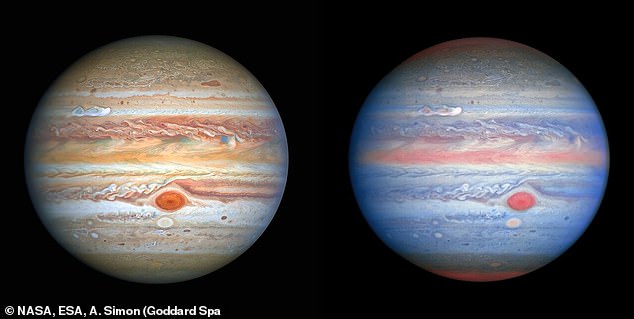 Hubble focused on Jupiter on August 25 and took two images, one using visible wavelengths of light to create a classical look at Jupiter (left), and another which combined various wavelengths, including ultraviolet, visible and near-infrared (right)

Exotic weather on Jupiter is caused by slushy ‘mushballs’ made of water and ammonia that trigger huge storms on the gas giant, studies have revealed.

Ammonia — a key ingredient in fertiliser — acts like an anti-freeze when it mixes with ice crystals, causing them to melt and in turn trigger vast storms.

These spinning banks hang up to some 10 miles above Jupiter’s other clouds and cast vast shadows, as well as causing lightning flashes.

This captures more rays of light emitting from Jupiter which are invisible to the human eye and make the planet look like a blue-purple gobstopper.

Both images reveal the Great Red Spot, Jupiter’s most iconic feature, is still shrinking in size, but that the rate of contraction is slowing down.

The storm driving the Giant Red Spot is thought to have first started more than 350 years ago.

Although it is not as big as it was when it was first measured in the 1930s, it is still almost 10,000 miles in diameter — big enough to swallow the Earth.

‘Hubble shows that the Great Red Spot, rolling counterclockwise in the planet’s southern hemisphere, is ploughing into the clouds ahead of it, forming a cascade of white and beige ribbons,’ NASA writes.

‘The Great Red Spot is currently an exceptionally rich red colour, with its core and outermost band appearing deeper red.’

This is the mini storm that sits just below the legendary Great Red Spot.

Fifteen years ago it had a deep red hue similar to its big brother, but it has been fading over time.

However, Hubble reveals it is now growing more crimson again as the storms within continue to rage.