Iconic photos of the the First World War and WII, as well as the intervening conflicts, have been brought to life in colour and given a new perspective to the bloodiest half-century in history.

From the muddy fields of Passchendaele in 1917 to the beaches of Normandy in 1944, Brazilian artist Marina Amaral has added full colour digital renditions of 200 images from the world wars, the civil wars and anti-imperial uprisings across the globe in the intervening years.

Historians estimate that some 100 million died during the world wars and many thousands more were killed in the conflicts which followed the First World War and preceded the second.

In a collaborative effort with leading British historian Dan Jones, each of the photographs is accompanied by narratives of the conflicts. These include the world wars, as well as civil wars in Ireland and Spain, conflicts in Latin America and Britain’s colonial struggles from Africa to the Middle East.

Coast Guard Chief Photographer’s Mate Robert F. Sargent took this iconic picture as US soldiers waded from their amphibious boats onto the shores of Omaha Beach at 7.40am on June 6, 1944. The Normandy landings, code-named Operation Nepture, was the largest seaborne invasion in history. The US deployed some 73,000 men in total, including from the airborne divisions which landed shortly after midnight before the invasion on the beaches. American soldiers landed at the Omaha and Utah beaches. The British and Canadians, 83,000 men by sea and air, were to land at Gold Beach, Juno Beach and Sword Beach. There are estimated to have been more than 6,500 casualties at Omaha Beach, the five mile stretch where this photo was taken 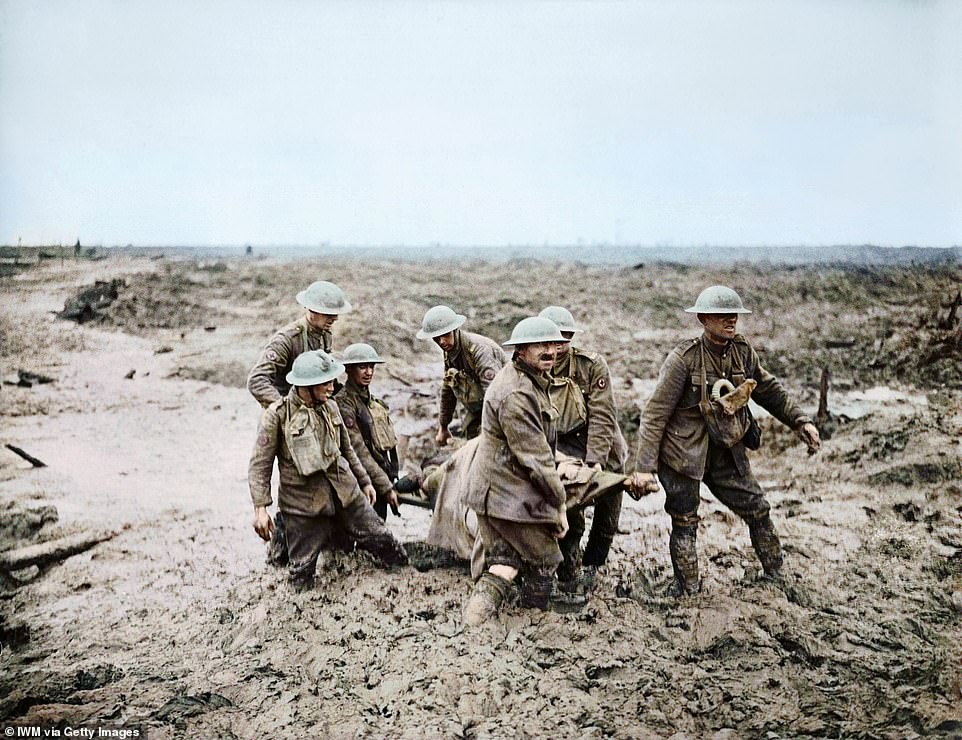 Battle of Passchendaele (the Third Battle Of Ypres) took place from July 31 to November 10, 1917, for control of ridges south and east of the Belgian city of Ypres in West Flanders. Passchendaele lies on a last ridge east of Ypres, five miles from Roulers, the station through which the majority of supplies to the German 4th Army ran. In this photograph taken by Lt. J W Brooke on August 1, stretcher bearers struggle in mud up to their knees to carry a wounded man to safety near Boesinghe. Unusually wet weather that summer and then the beginning of autumn rains led to appalling conditions. In his memoirs in 1938, Lloyd George wrote: ‘Passchendaele was indeed one of the greatest disasters of the war … No soldier of any intelligence now defends this senseless campaign.’ It was one of the bloodiest battles of the war, with more than 850,000 casualties in total 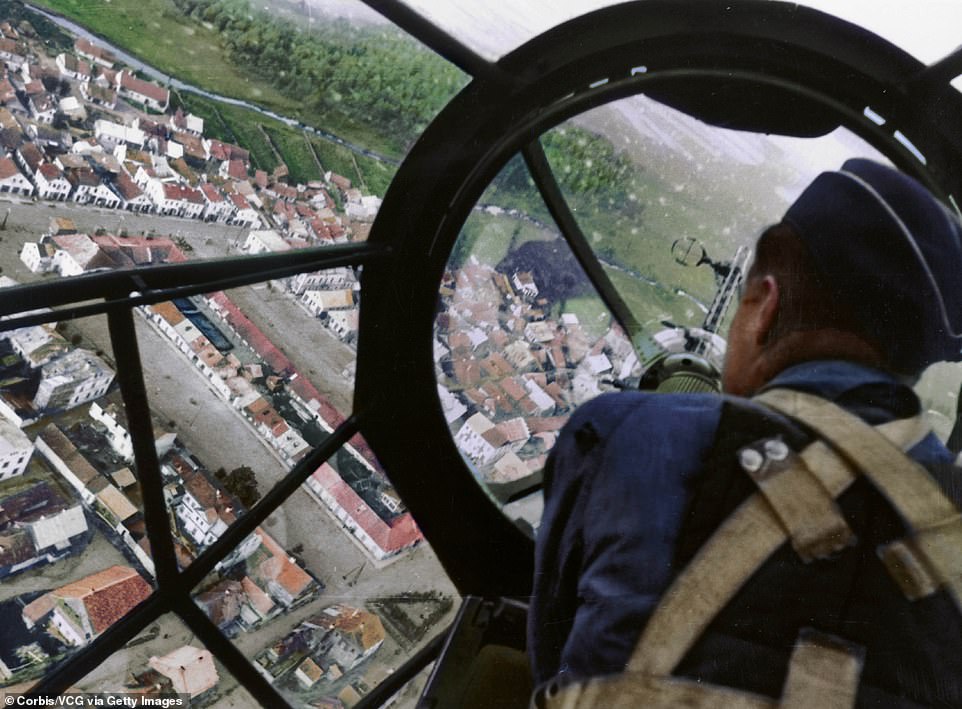 Adolf Hitler began World War II with the September 1, 1939 invasion of Poland, when he attacked the harbour of Danzig (modern day Gdansk), along the northern coast. This photo taken from a German Heinkel He 111 bomber and shows the city below. The attack focused on the Polish Military Transit Depot at the harbour rather than the city – whose population was largely ethnic German. The Poles were able to hold out for a week and repelled 13 attacks, including dive-bomber sweeps and naval shelling 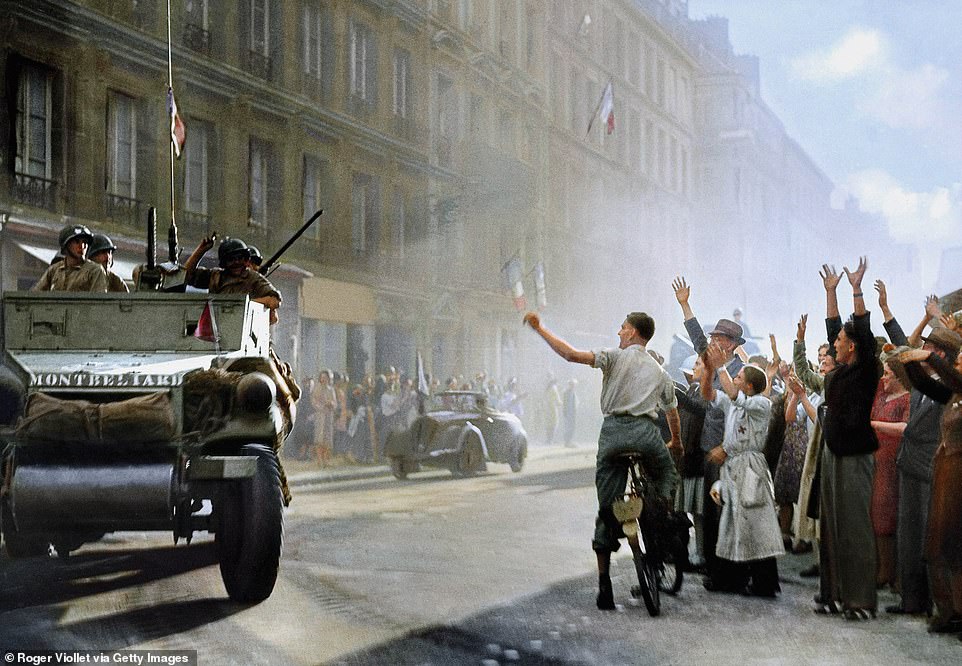 The Liberation of Paris: The armoured cars of General Philippe Leclerc’s division arriving rue Guynemer, August 25, 1944. Paris had been ruled by the Nazis since the signing of the Second Compiègne Armistice on June 22, 1940. The liberation began with French Forces of the Interior – the military units of the French Resistance – brought an uprising against the German garrison as the US Army under General George Patton approached. On the night of August 24, Leclerc’s 2nd French Armoured Division went to Paris and arrived at the Hôtel de Ville. The next morning the bulk of the 2nd Armored Division and US 4th Infantry Division entered the city. 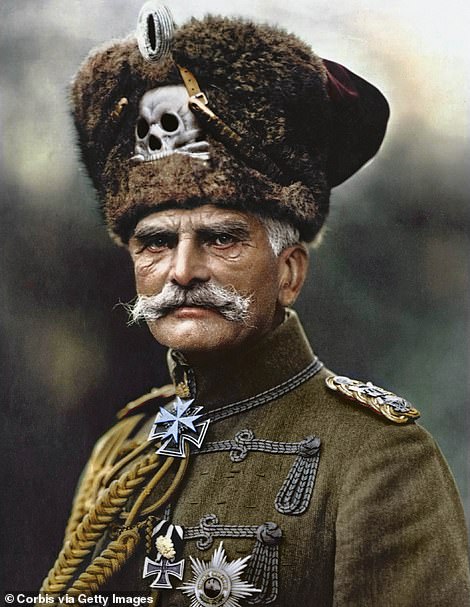 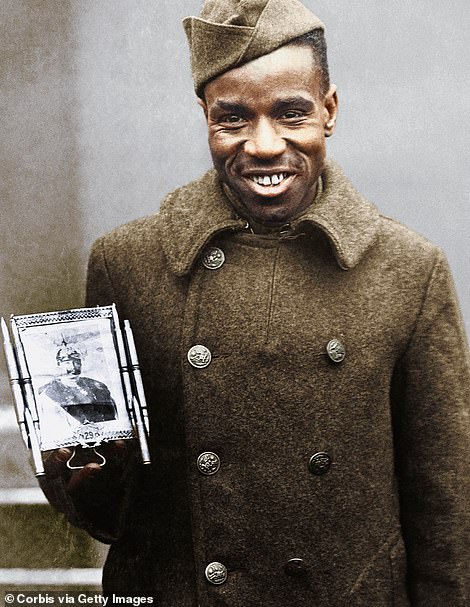 August von Mackensen (1849-1945), a German Field Marshal during World War I, wears a fur hat with a skull embedded in it while Iron Crosses decorate his uniform (left). And Corporal Fred McIntyre (right) who fought in the 369th Infantry – the African-American unit known as the Harlem Hellfighters – during WWI. He displays a framed photo of Kaiser Wilhelm II that he carried around for luck. The Harlem Hellfighters spent 191 days on the front – the most of any American regiment – and sustained 1,500 casualties – more than any American regiment. 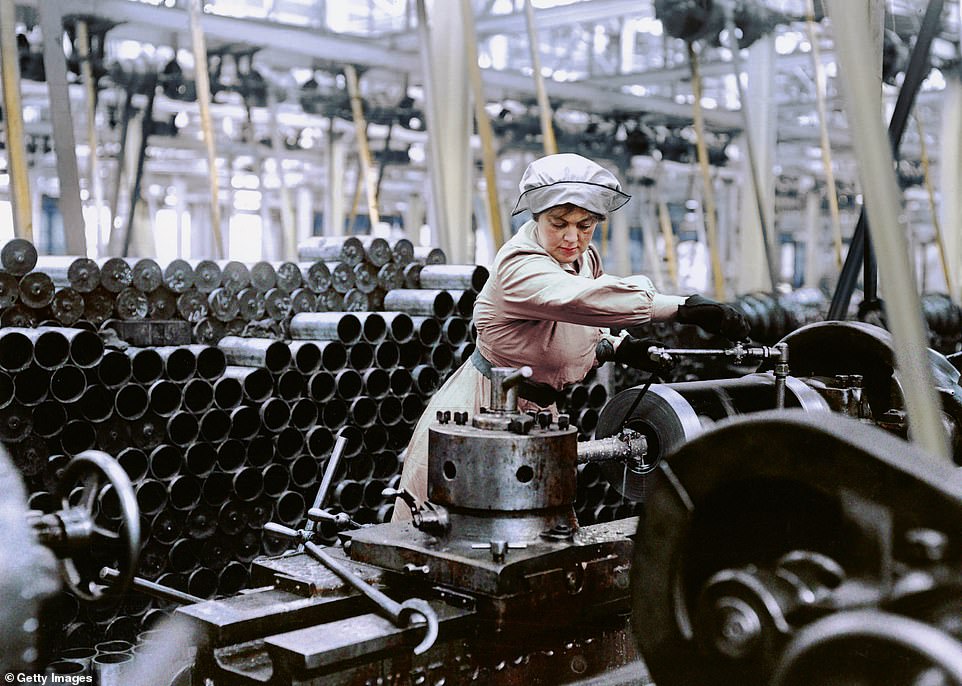 A woman munitions worker operating a machine in an armaments factory during the First World War. They stepped up to fill the gaping holes in various industries as vacancies shot up when their husbands, brothers, cousins and friends were conscripted. The employment of married women increased sharply – accounting for nearly 40 per cent of all women workers by 1918. Following the war’s end, many women were laid off when soldiers returned from the blood-soaked battlefields on the continent. Those who stayed on were often expected to work for less money than their male counterparts despite doing the same job. Flagrant workplace discrimination continued until the Second World War, when women once again stepped in to fill the shoes of the men sent away to fight in another global conflict. 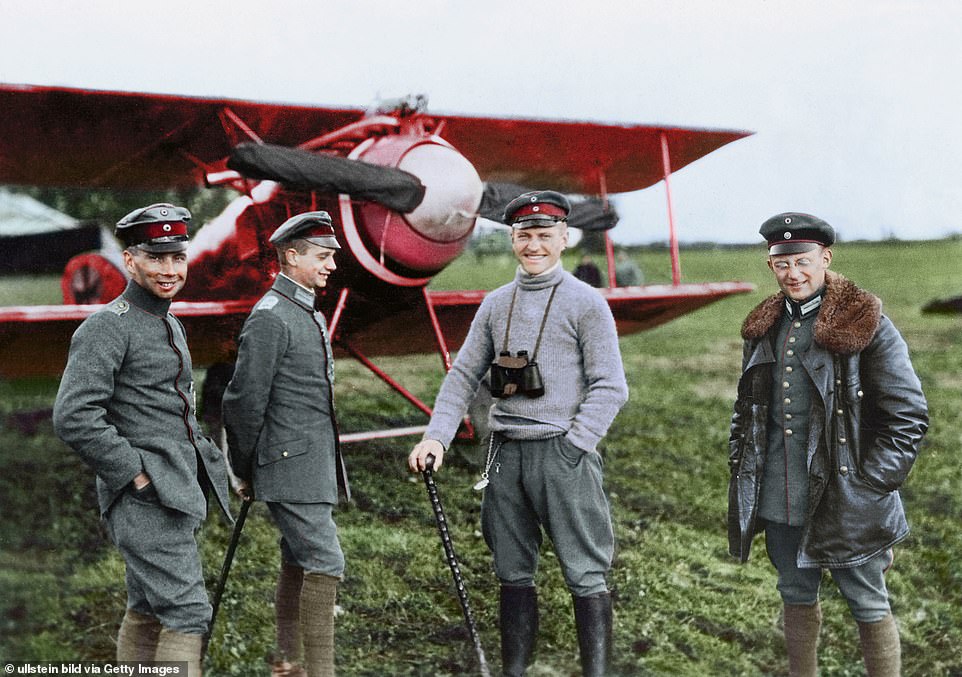 The Red Baron: First World War German fighter pilot Manfred von Richthofen (with binoculars) with fellow pilots in front of his Fokker biplane. The brilliant pilot, who was credited with a staggering 80 kills in the war, was shot down as he chased a British Sopwith Camel plane over the River Somme near Amiens in France at just 400ft from the ground. He originally served as a cavalryman before transferring to the air force in 1915. Von Richtofen was christened the Red Baron because many of his successes were in aircraft painted bright red, initially an Albatross. His final 19 victories were at the controls of a red Fokker Dr.I triplane. 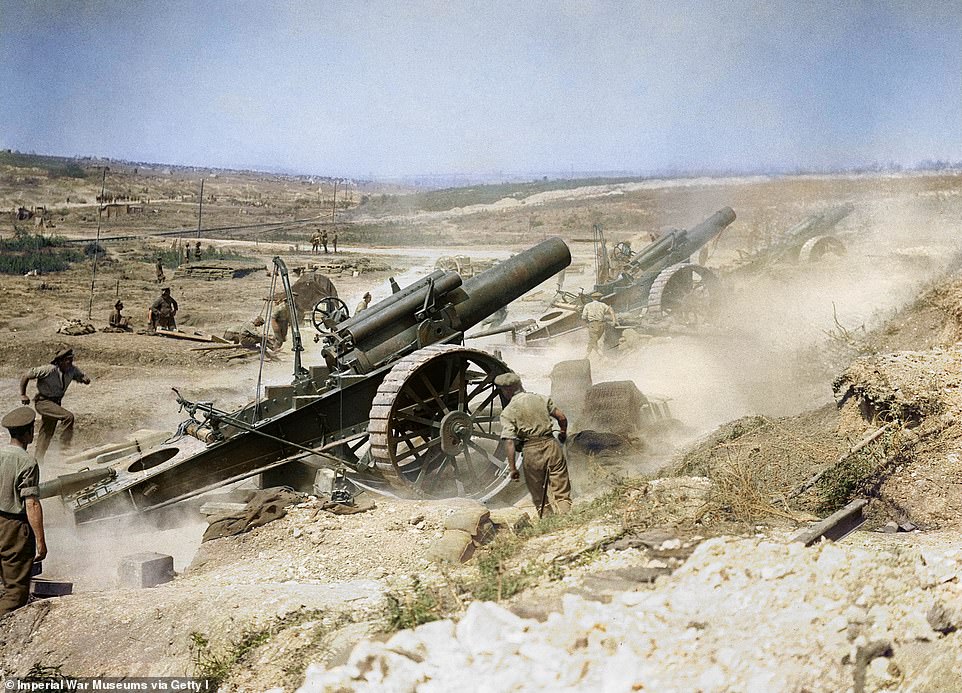 The British Army On The Western Front In 1916, Three 8-inch howitzers of 39th Siege Battery, Royal Garrison Artillery (RGA), firing from the Fricourt-Mametz Valley during the Battle of the Somme, August 1916. Lasting 141 days, the Battle of the Somme was the bloodiest battle of the First World War. Around 420,000 British soldiers, 200,000 Frenchmen and 500,000 Germans were killed in the battle. It is estimated 24,000 Canadian and 23,000 Australian servicemen also fell in the four-month fight. On the first day alone, 19,240 British soldiers were killed after ‘going over the top’ and more than 38,000 were wounded. 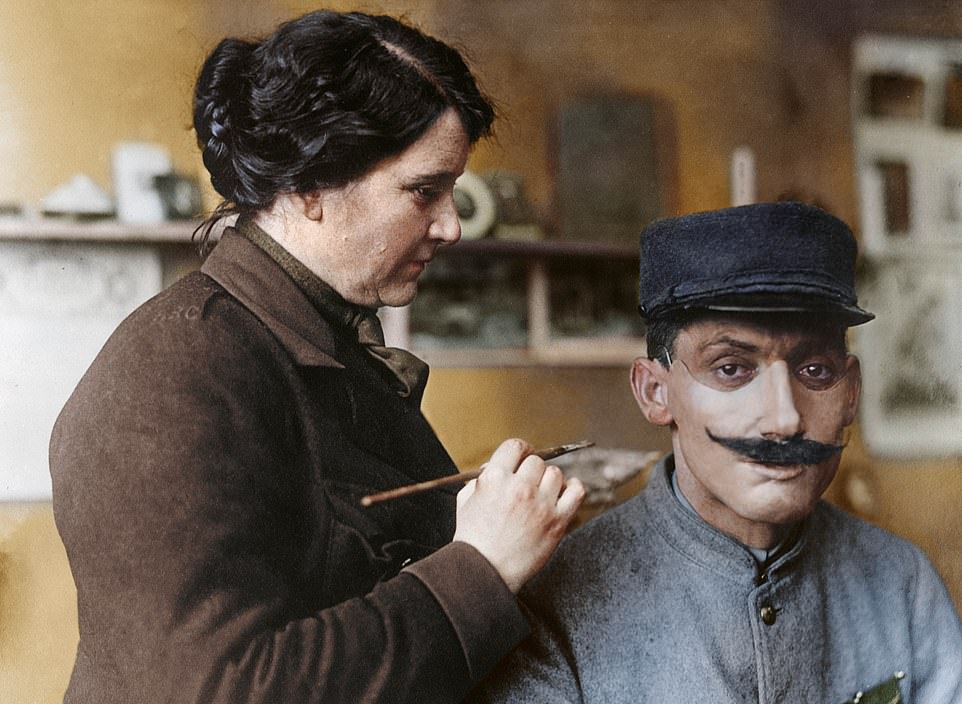 A WWI soldier has paint added to a mask to cover his horrific face wounds. Never before had warfare been so bloody and mutilated so many men. Thousands were left with life-long disabilities and left with terrible scars and disfigurements. World War 1 saw over 700,000 British and Commonwealth forces killed and more than 1.6 million wounded. Of these, around 240,000 suffered total or partial leg or arm amputations as a result. 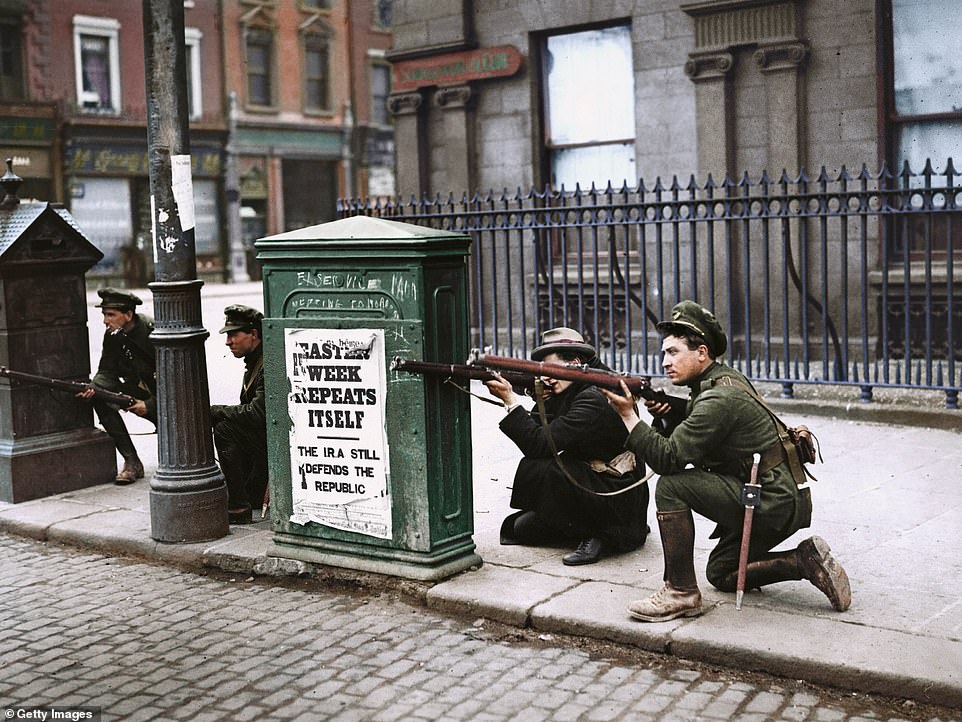 The Battle of Dublin: Free State soldiers fighting against Republican forces at O’Connell Bridge in Dublin in the first week of the Irish Civil War. The conflict followed the Irish War of Independence and came alongside the establishment of the Irish Free State, an entity independent from the United Kingdom but within the British Empire. The civil war, fought from June 28, 1922 to May, 24 1923, was waged between two opposing groups, Irish republicans and Irish nationalists, over the Anglo-Irish Treaty. 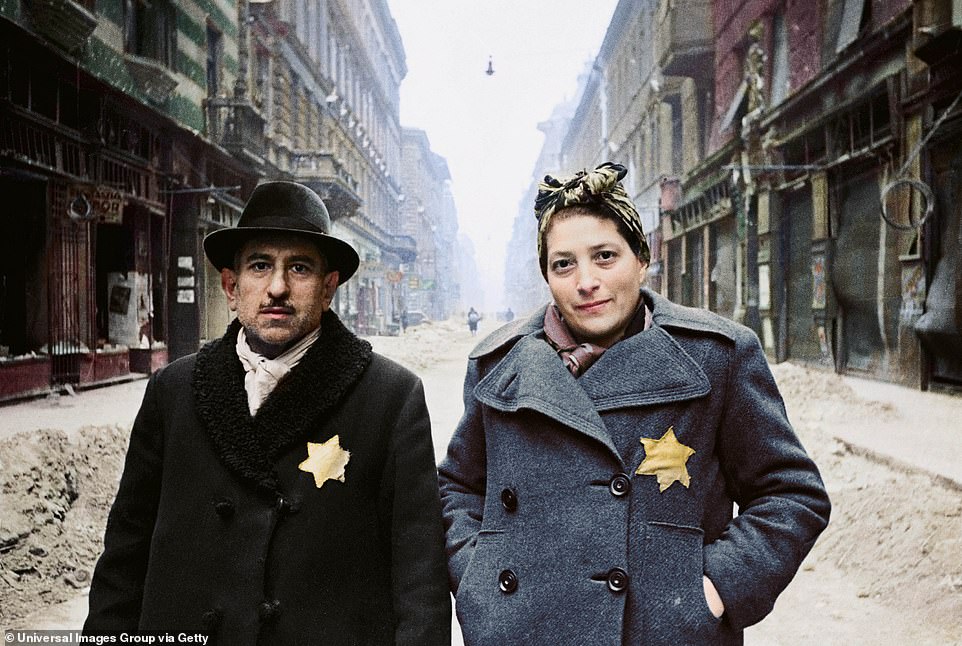 A Jewish couple in the Warsaw Ghetto in 1942. Nazi occupiers in 1940 corralled some 400,000 Jews into a small section of Warsaw most of whom were then sent to camps to be killed or died from the conditions in the Ghetto itself. The Ghetto was destroyed in 1943 when the Nazis, attempting more deportations, were met with fierce opposition and a month long uprising. 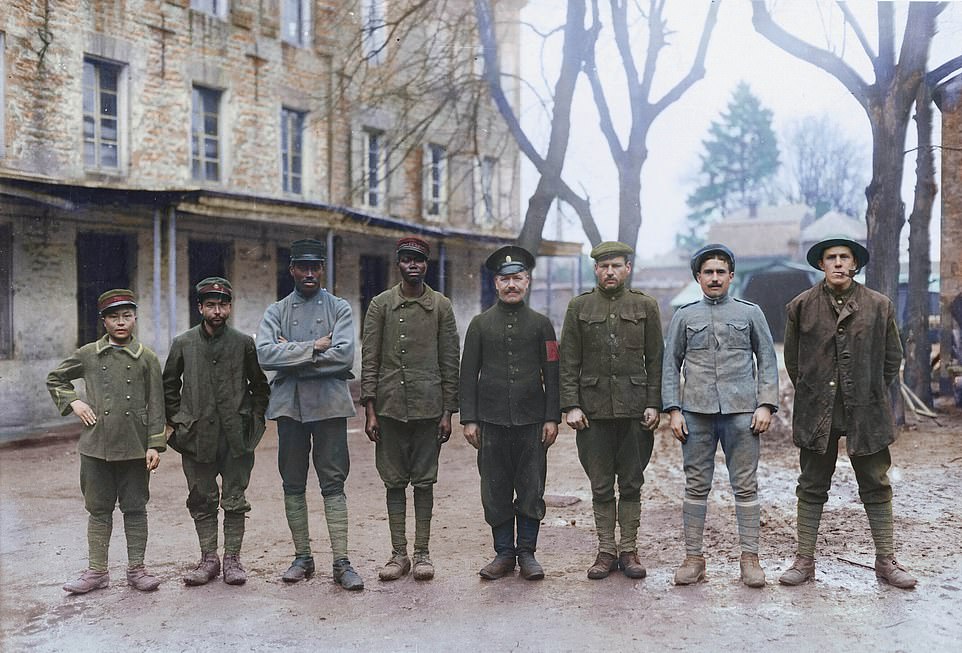 Captured prisoners of the First World War from eight different nations at an unknown German prisoner of war camp, from left, Annamite (Vietnamese), Tunisian, Senegalese, Sudanese, Russian, American, Portuguese and English. Certain camps were harsher than others, whereas others afforded comfortable living conditions to officers who had been captured. Ranking prisoners even had a gentleman’s agreement with their guards, meaning they were allowed out during the day provided they returned to the camp before nightfall. 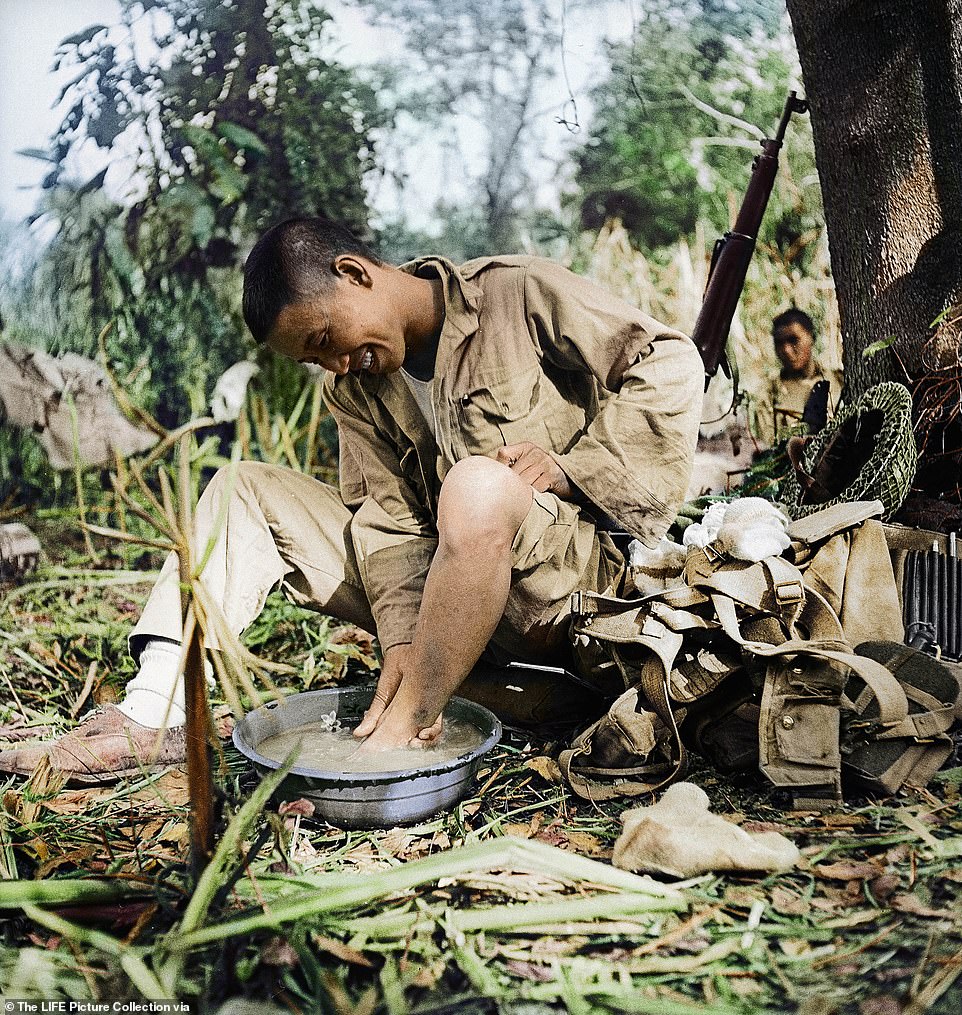 Chinese Captain Huang Chuen-Yu, executive officer of artillery battery in the Chinese 22nd Division, washes his feet at a command post, Burma, April 1944. The Chinese Expeditionary Force, a unit in China’s National Revolutionary Army, was sent to Burma and India to support the Allies against the Imperial Japanese Army during Japan’s invasion of Burma 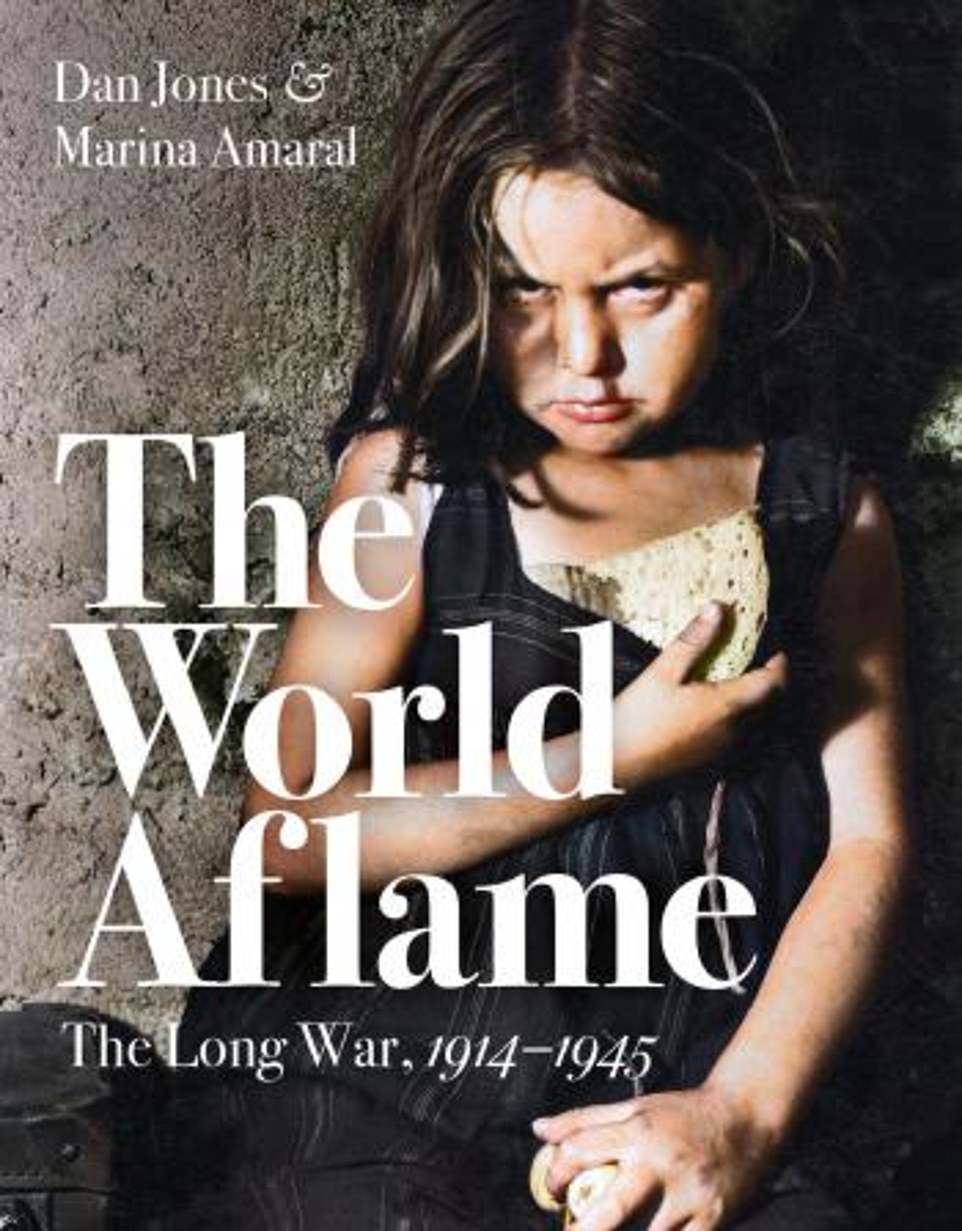 From the muddy fields of Passchendaele in 1917 to the beaches of Normandy in 1944, Brazilian artist Marina Amaral has added full colour digital renditions of 200 images from the world wars, the civil wars and imperial uprisings across the globe in the intervening years. In a collaborative effort with leading British historian Dan Jones, each of the photographs is accompanied by narratives of the conflicts. These include the world wars, as well as civil wars in Ireland and Spain, conflicts in Latin America and Britain’s imperial battles from Africa to the Middle East.