Doomsday ‘preppers’ have revealed their plans to survive coronavirus, by staying at a camp complete with concrete bunkers, gun store, solar panels and a ditch where contaminated bodies can be incinerated.

The Fortitude Camp in West Virginia, two hours outside the capital Washington, will go into lockdown when its committee-of-five vote to declare a ‘catastrophic situation’, meaning all members will be asked to come to the camp. Access will then only be permitted via a secret password.

Survivalists pay $1,000-a-year for a space on one of its 500 bunk beds and access to its stores which the manager claims are filled with enough flour, rice and toilet paper to last the inhabitants for 25 years.

The camp, nestled in the Appalachian mountains, also has wells, radio equipment, greenhouses and a farm with chickens, goats and cows. It is protected by four armed lookout posts.

The Fortitude Camp in West Virginia, the Appalachian mountains, sells itself as a ‘real’ life insurance policy in the case of societal meltdown. Pictured above is one of the buildings members would stay in 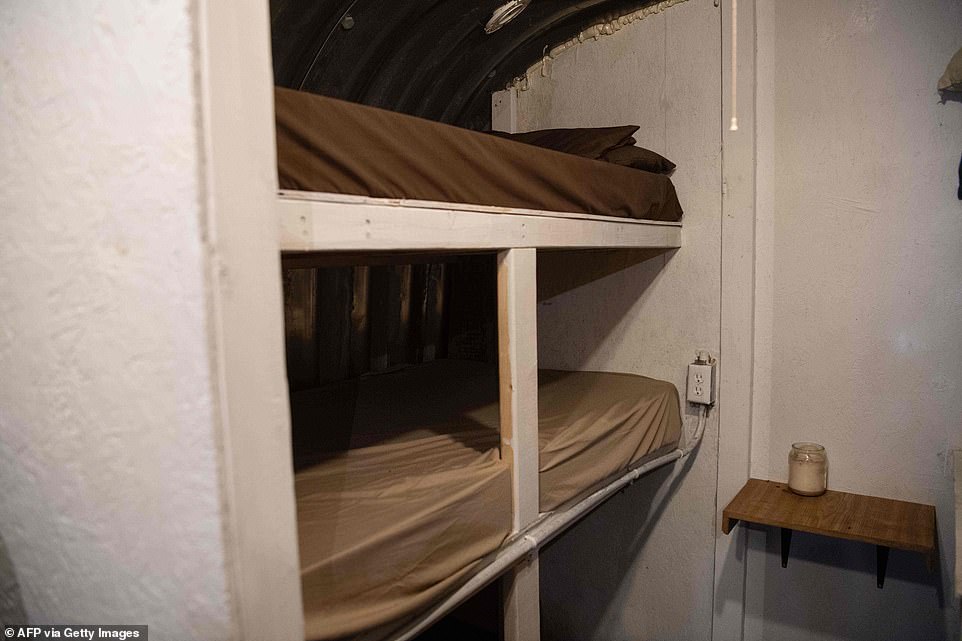 Those wishing to sign up can pay $1,000-a-year for a guaranteed space on one of the camps 500 bunk beds (pictured) 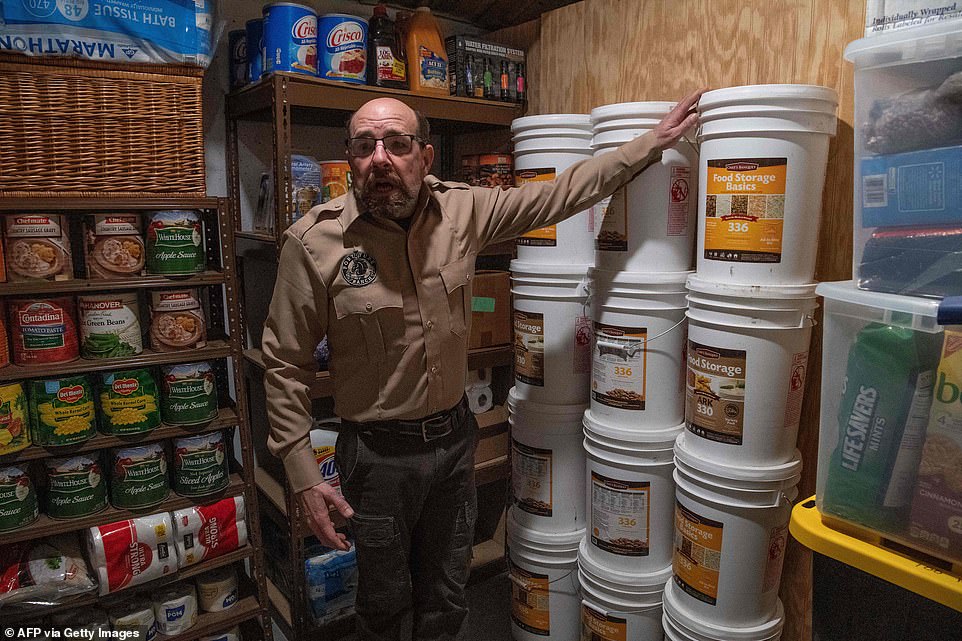 Manager and former veteran who served in the 1991 Persian Gulf war Steve Rene, pictured above, explained that they are stocked with enough food to last them all for 25 years 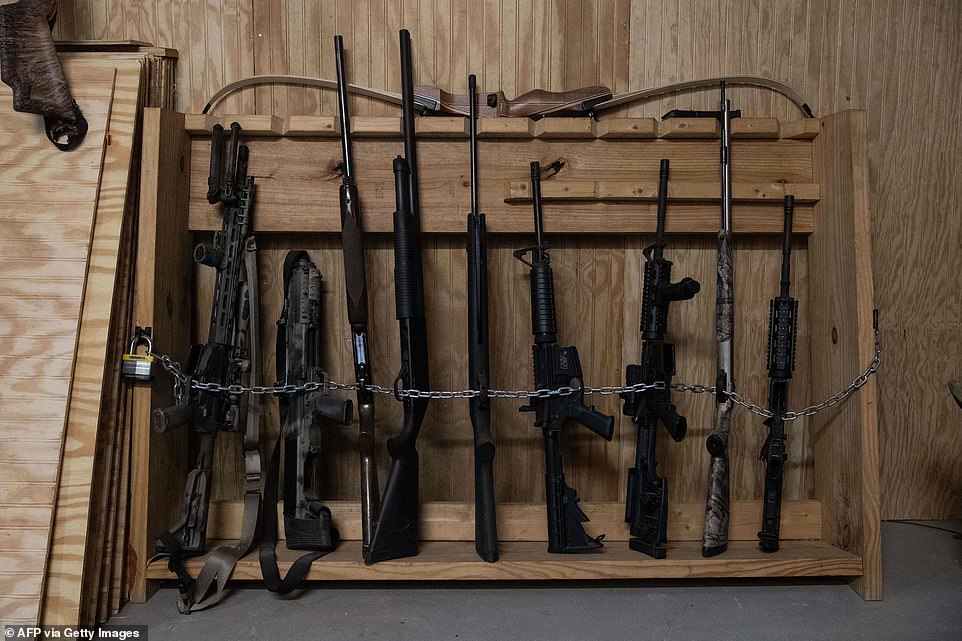 The camp is also flanked by four lookouts armed with guns, so that other Americans don’t come and try to steal their food

‘It’s not a bunch of crazy people with this idea that tomorrow the world ends,’ said manager and former Operation Desert Storm soldier who participated in the 1991 attack in the Persian Gulf, Steve Rene.

‘We’re not militaristic. We have no ties with militias, anything like that. If you’re not prepared in some way, you have just no where to go, nothing to do. Everybody scrambles and lots of things get out of hand.

The camp four lookout points are armed with high-calibre rifles, which are cable of stopping armoured vehicles in their tracks.

‘Desperate people do desperate things,’ said Mr Rene. The ‘survivalists’ view their main threat as other Americans rushing to steal their provisions. ‘Obviously that’s not very likely,’ said the former soldier, ‘but the possibility exists’. 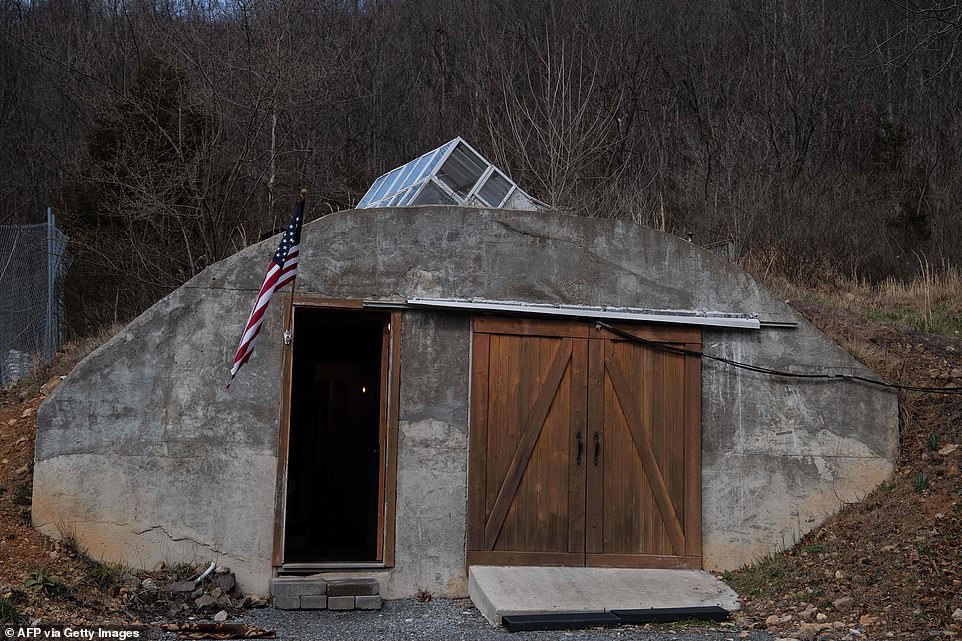 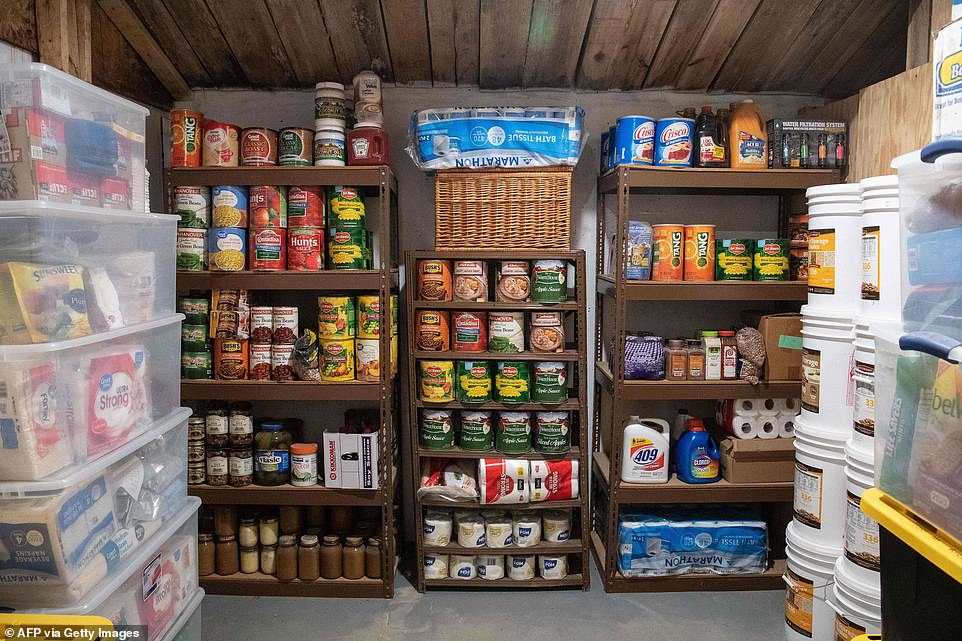 This is one of the camp’s many food stores. They also have plenty of toilet paper and face masks – in the case of an outbreak 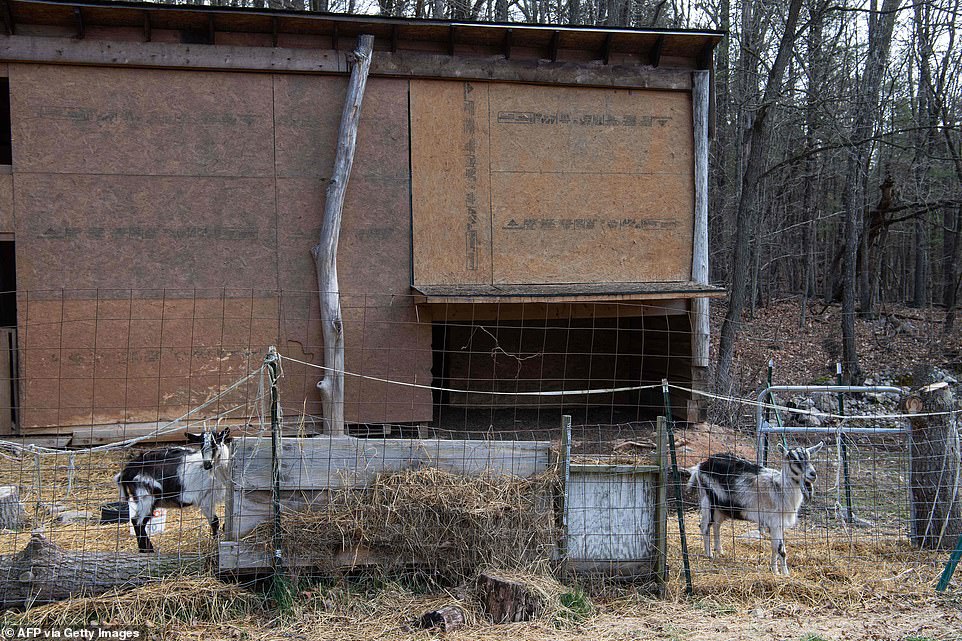 The camp has also been kitted out with a farm complete with goats (above), chickens and cows 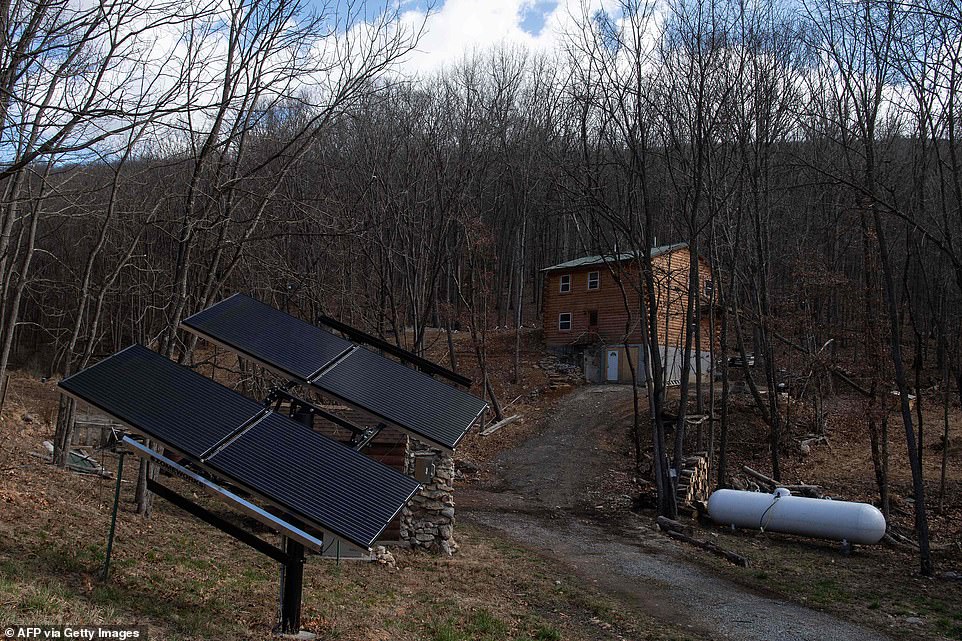 Shown above is one of the camps buildings with solar panels, which will keep it illuminated in the case of disaster

In the case of an epidemic, camp policy dictates that new arrivals temperature will be checked with a no-contact thermometer before they are allowed in.

It was founded by a former military intelligence expert and Harvard University graduate, Drew Miller, who has established a separate branch in Colorado and hopes to build more across the US.

Since the coronavirus outbreak, Mr Rene said he has been receiving more and more enquiries from worried people across the country.

Worried people who already had the idea of survivalism ‘at the back of their mind’ are now seeing ‘there can be a need’, said Mr Rene.

A laptop open next to him shows an online map displaying the spread of the virus in real time.

There are no red dots in the vicinity of the survivalists’ ranch. As of Monday, West Virginia was the last state in the country not to have declared any cases of the disease that has shut down so much of the world. 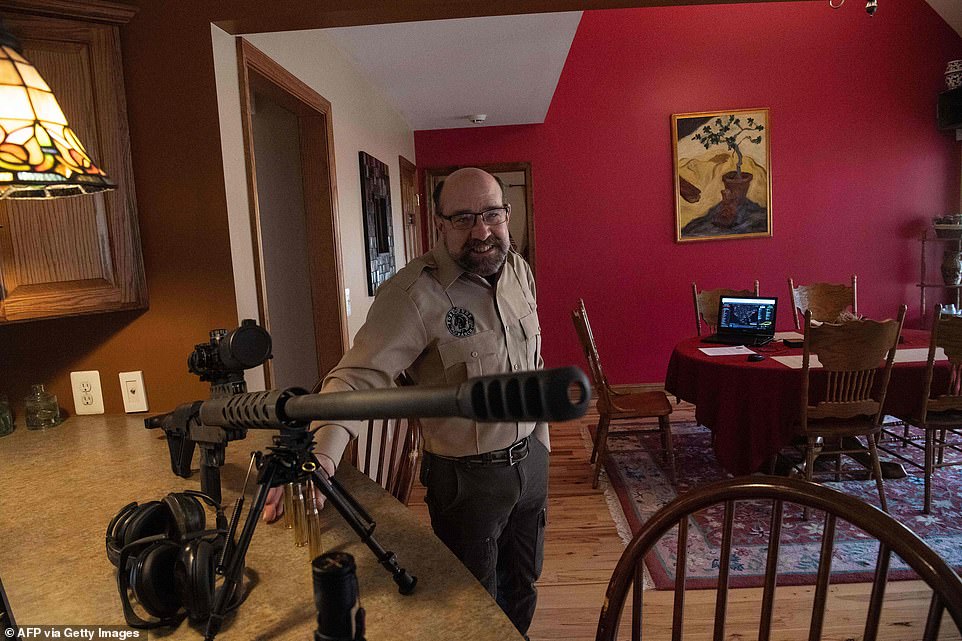 Mr Rene smiles as he shows one of the guns that the camp would use to protect itself against other Americans. He also said that in the case of an outbreak, all new arrivals would have their temperature checked 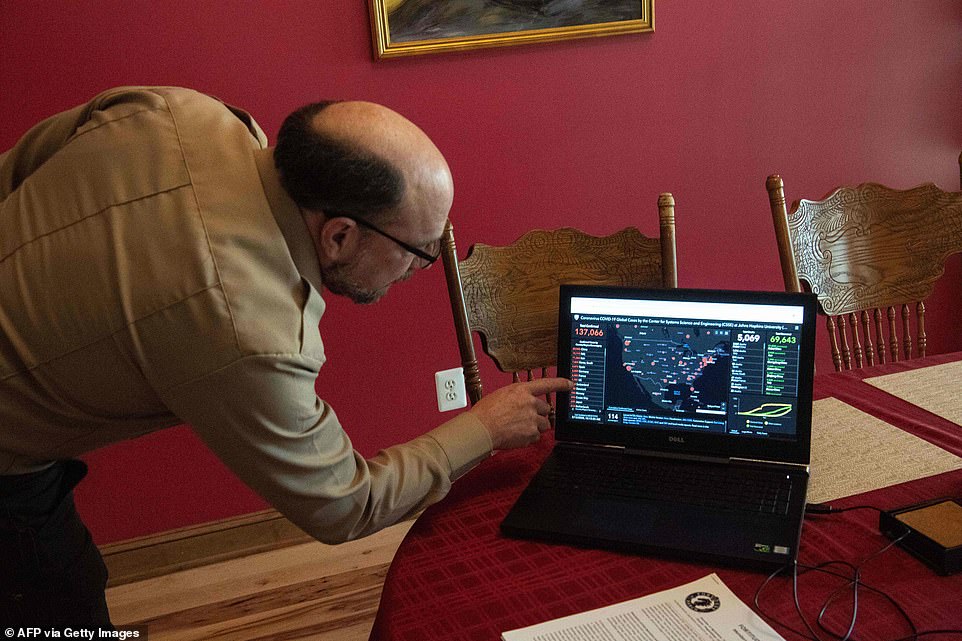 Mr Rene showing a map tracking reported coronavirus cases in the US. There are none near the isolated camp at present 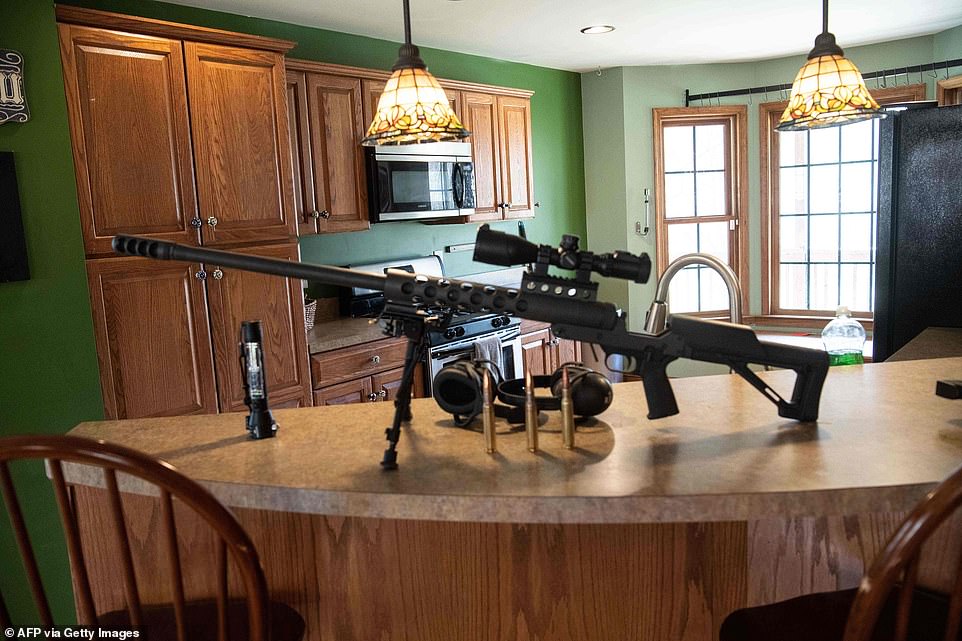 The gun pictured placed onto a kitchen work surface in West Virginia. The camp has four lookout points to protect it 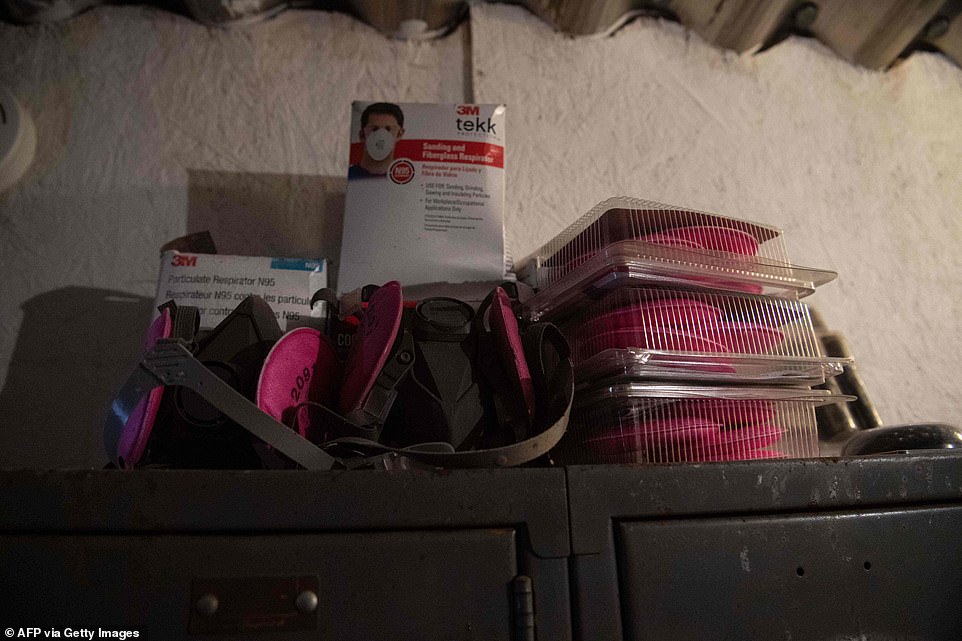