The Tomb of Tutankhamen has fully reopened following a decade long restoration project.

One of the best known archaeological sites in the world, the Getty Conservation Institute, which carried out the conservation project, today revealed their work for the first time.

Researchers painstakingly cleaned the huge wall art in the tomb – but decided to leave a series of strange mysterious ‘dark spots’ that were there in 1922 when archaeologist Howard Carter first opened the tomb.

The fully restored north wall of the burial chamber depicts three separate scenes, ordered from right to left. In the first, Ay, Tutankhamen’s successor, performs the ‘opening of the mouth’ ceremony on Tutankhamen, who is depicted as Osiris, lord of the underworld. In the middle scene, Tutankhamen, dressed in the costume of the living king, is welcomed into the realm of the gods by the goddess Nut. On the left, Tutankhamen, followed by his ka (spirit twin), is embraced by Osiris.

WHAT DOES THE TOMB STILL CONTAIN?

The tomb still houses a handful of original objects, including the mummy of Tutankhamen himself (on display in an oxygen-free case), the quartzite sarcophagus with its granite lid on the floor beside it, the gilded wooden outermost coffin in the sarcophagus, and the wall paintings of the burial chamber.

It was thought that brown spots—microbiological growths on the burial chamber’s painted walls—might be growing.

However, researchers analyzed historic photographs from the mid-1920s and found they showed no new growth of the spots.

To confirm this finding, DNA and chemical analysis were undertaken and confirmed the spots to be microbiological in origin but dead and thus no longer a threat.

Because the spots have penetrated into the paint layer, they have not been removed since this would harm the wall paintings.

The latest project was put in place over fears the tomb was being damaged by the sheer number of tourists visiting. 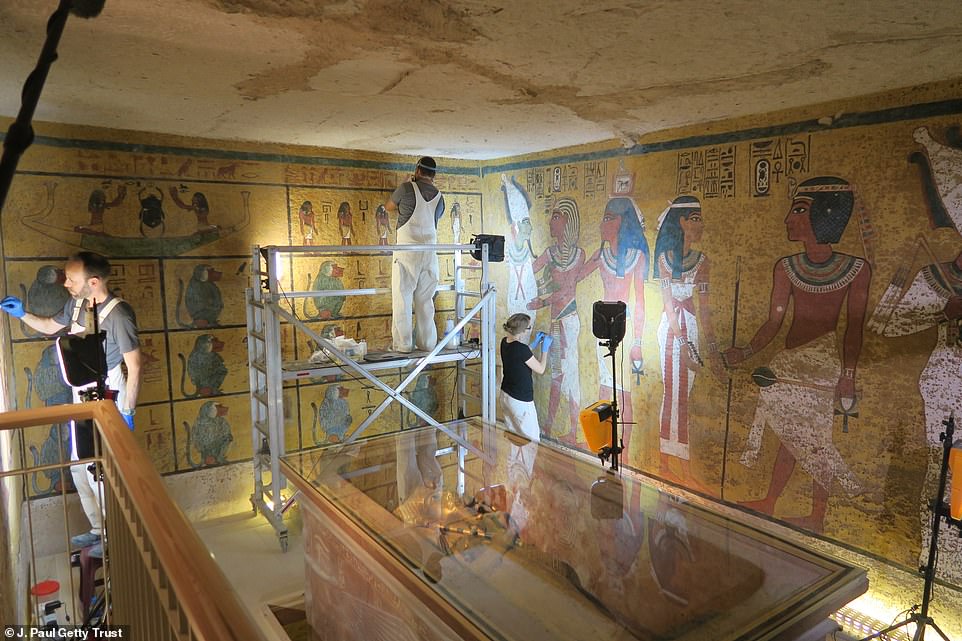 Wall paintings conservation work being conducted in the burial chamber of the tomb in the spring 2016. 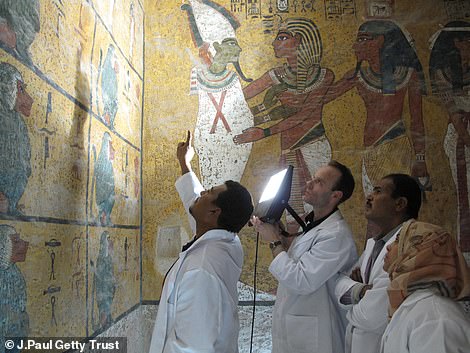 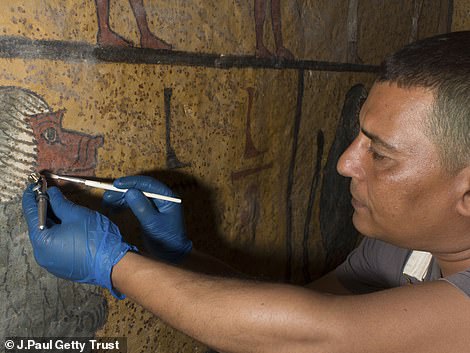 Left, researchers undertaking a visual examination of the wall painting in the burial chamber, and right, Wall paintings conservation work being conducted

While the objects Carter’s team catalogued and stabilized were housed and secured, the tomb itself became a ‘must-see’ attraction, open to the public and heavily visited by tourists from around the world.

The tomb still houses a handful of original objects, including the mummy of Tutankhamen himself (on display in an oxygen-free case), the quartzite sarcophagus with its granite lid on the floor beside it, the gilded wooden outermost coffin, and the wall paintings of the burial chamber that depict Tut’s life and death.

‘Conservation and preservation is important for the future and for this heritage and this great civilization to live forever,’ said Zahi Hawass, Egyptologist and former minister of State for Antiquities in Egypt, who also initiated the project with the GCI.

One of the biggest worries were the giant paintings on the tomb walls. 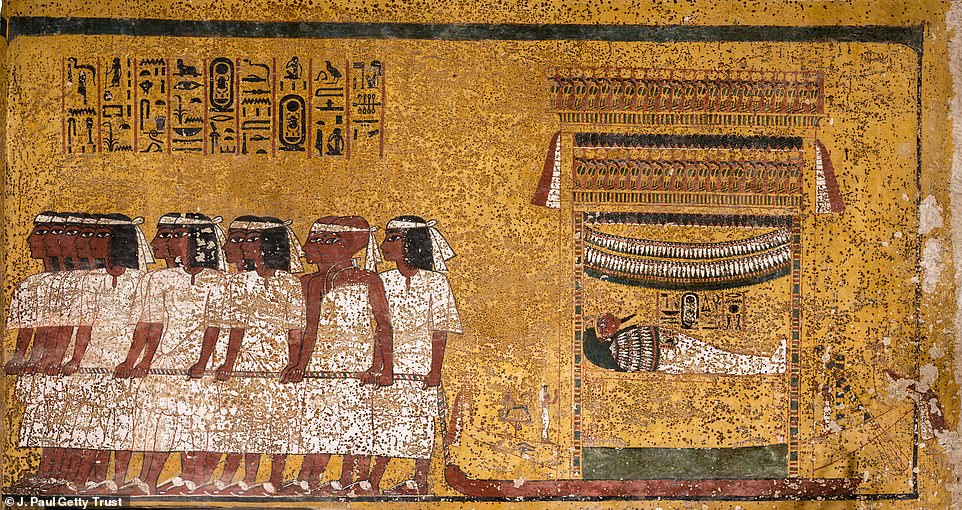 The East wall of the tomb’s burial chamber. Tutankhamen’s mummy isshown, lying in a shrine mounted on a sledge, being drawn bytwelve men in five groups. The men wear white mourning bandsover their brows. The last pair, distinguished by their shaven headsand different dress, are the two viziers of Upper and Lower Egypt 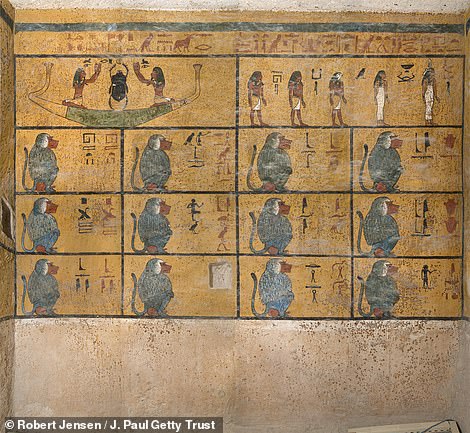 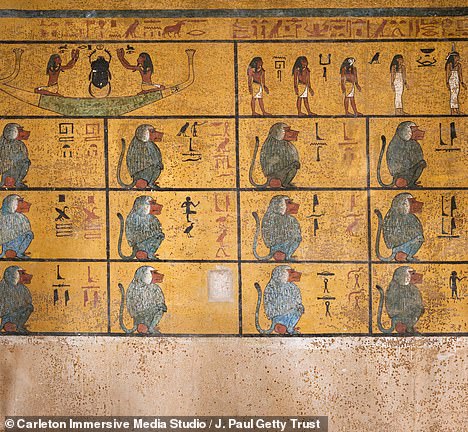 Before (left) and after (right), a wall painting on the burial chamber’s west wall depicts an extractfrom the Book of Amduat or ‘What is in the Underworld’. The upper register depicts the solar barque preceded byfive deities. In compartments below are twelve baboondeities,representing the twelve hours of the night through which the sun travels before its rebirth at dawn.

Humidity and carbon dioxide generated by visitors promoted microbiological growth and can physically stress the wall paintings when the amount of water vapor in the air fluctuates.

Another problem in the tomb was physical damage to the wall paintings.

This included scratches and abrasion in areas close to where visitors have access, and inadvertent damage likely caused by film crews with equipment operating in the chamber’s tight spaces. 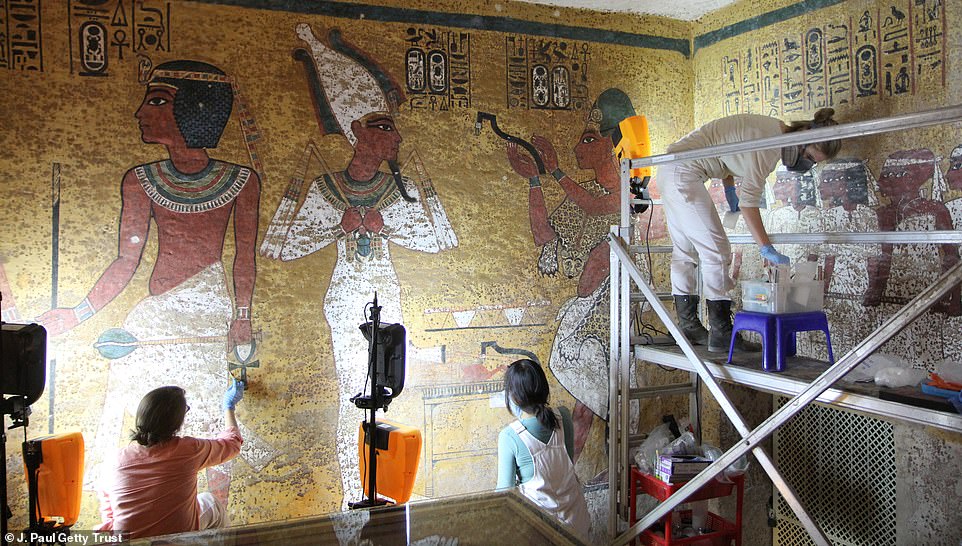 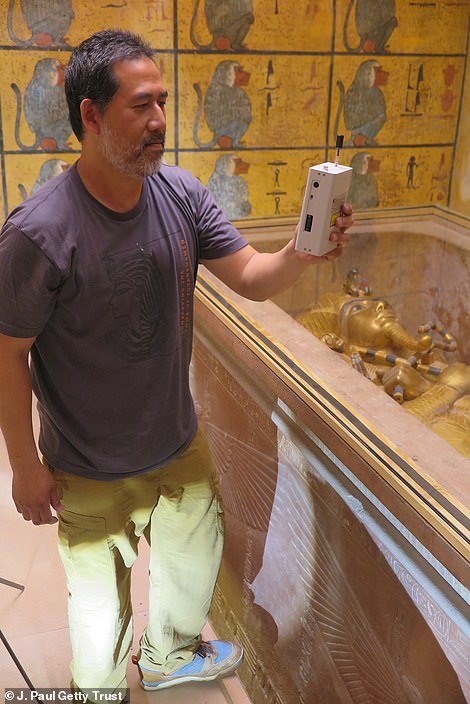 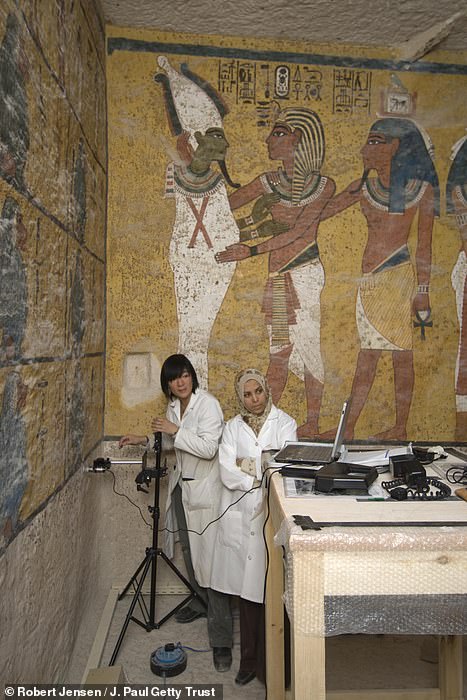 Left, Environmental monitoring in the burialchamber of the Tomb of Tutankhamen, and right, conservators using a portable microscope linked to a tablet to monitor the paintings on the west wall

Dust carried by the shoes and clothing of the tomb’s many visitors had also settled throughout, creating a gray veil on the uneven surfaces of the walls.

This obscured the brightness of the paintings and increased the need for cleaning and the subsequent risk of additional paint loss.

In addition, high levels of humidity, excessive carbon dioxide, crowding, poor lighting and ventilation, lack of signage, and other factors combined to create a poor experience for visitors to the tomb.

The project team found the wall paintings to be in relatively stable condition, apart from localized flaking and loss of paint that was caused by both inconsistencies in the materials used and their application, as well as damage caused by visitors. 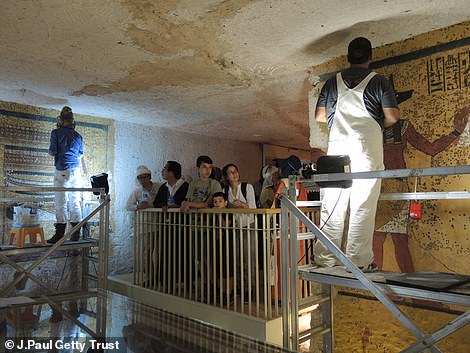 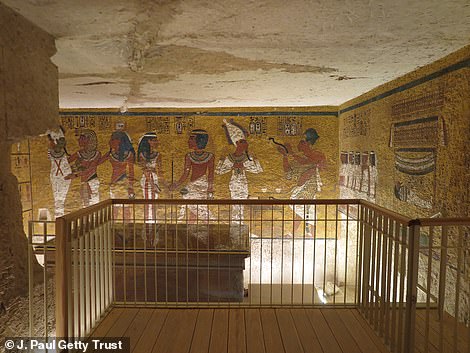 Wall paintings conservation work being conducted in the burial chamber of the tomb, and a new viewing platform in the tomb 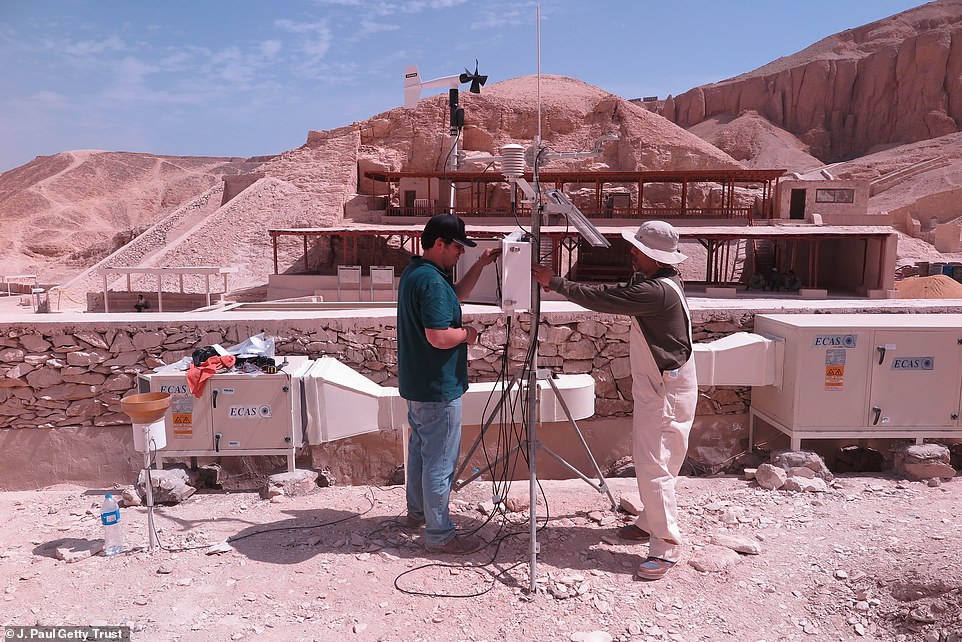 Environmental monitoring outside the Tomb of Tutankhamen

The paintings were stabilized through dust removal and reduction of coatings from previous treatments, and condition monitoring was also established to better evaluate future changes.

‘This project has greatly expanded our understanding of one of antiquity’s most storied places,’ says Tim Whalen, John E. and Louise Bryson Director of the Getty Conservation Institute.

The GCI-Egyptian project went on to carry out the most thorough study of the tomb’s condition since Carter’s time. 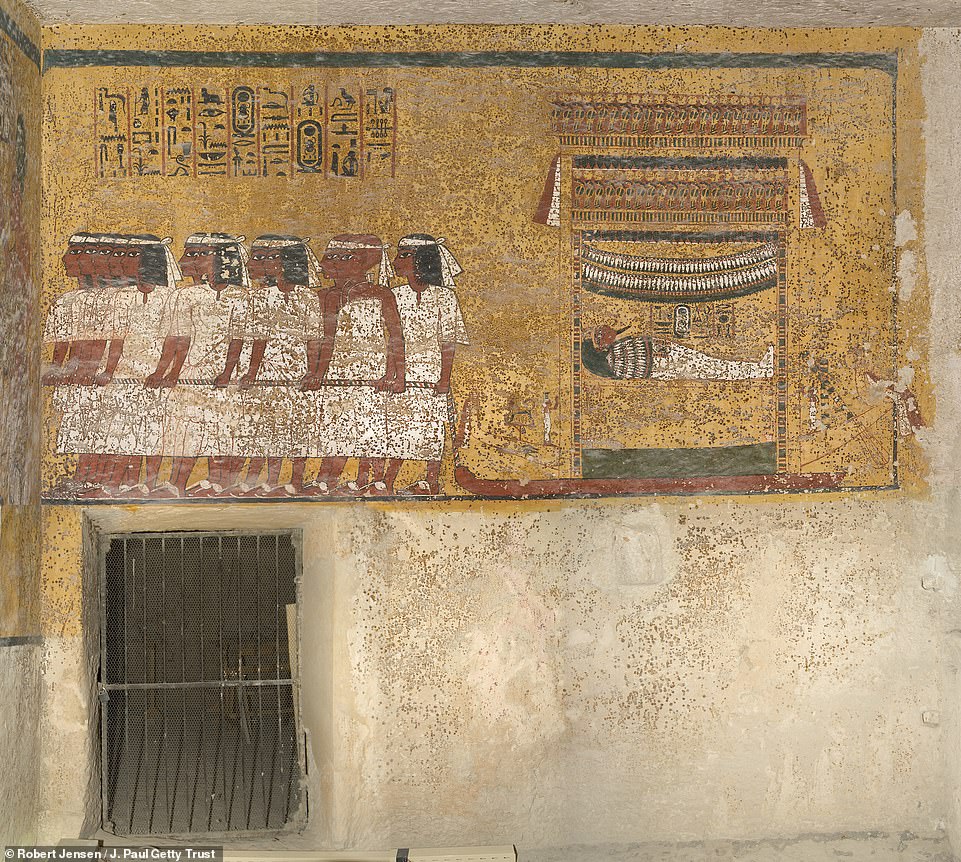 A Wall painting in Tut’s tomb on the  east wall of the tomb’s burial chamber. Tutankhamen’s mummy is shown, lying in a shrine mountedon a sledge, being drawn by twelve men in five groups. Themen wear white mourning bands over their brows. The last pair, distinguished by their shaven heads and different dress,are the two viziers of Upper and Lower Egypt. 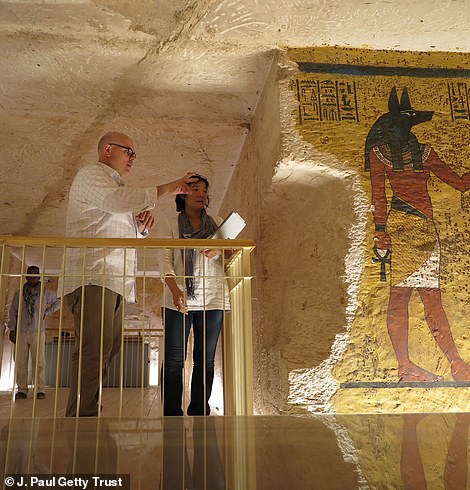 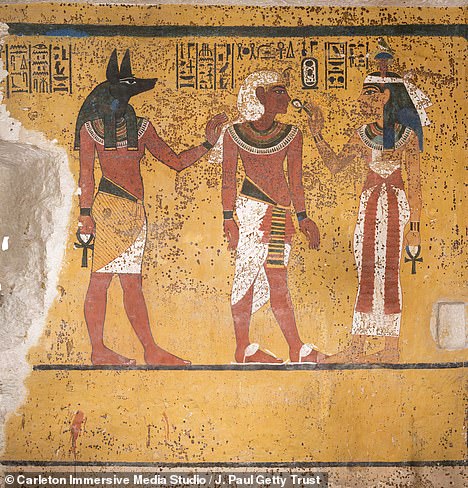 A section of the south wall in the burial chamber ofTutankhamen. Mirroring the theme of the north wall, the painting here shows Tutankhamen with various deities. He stands before Hathor, goddess of the West, while behind the king stands Anubis, the embalmer god. Behind him originally stood the goddess Isis with three other minor deities

The team of experts included an Egyptologist to conduct background research; environmental engineers to investigate the tomb’s microclimatic conditions; microbiologists to study the brown spots; documentation specialists, architects, and designers to upgrade the tomb’s infrastructure; scientists to study the original materials of the wall paintings; and conservators to carry out condition recording and treatment.

In addition to the wall paintings conservation, the GCI also facilitated upgrades to the protection and presentation of the site

The tomb was open for most of the project, and visitors were able to observe and ask questions as the conservators worked.