The first high-resolution model simulating an entire gas cloud where stars are formed has been created, allowing researchers to watch the birth of a star.

A team including astrophysicists from Illinois’s Northwestern University developed the most realistic, highest-resolution 3D simulation of star formation to date.

The result of their efforts is a visually beautiful tool that allows viewers to float around a colourful cloud of gas while stars emerge around them.

Called STARFORGE (Star Formation in Gaseous Environments), the computational framework is the first to simulate an entire gas cloud in full colour high-resolution, and up to 100 times more massive than previously possible.

It also is the first simulation to model star formation, evolution and dynamics while also accounting for things like jets, radiation, wind and nearby supernovae activity.

The researchers aim to explore questions on why star formation is slow and inefficient, what determines a star’s mass and why stars tend to form in clusters.

Snapshot from a STARFORGE simulation. A rotating gas core collapses, forming a central star that launches bipolar jets along its poles as it feeds on gas from the surrounding disk. The jets entrain gas away from the core, limiting the amount that the star can ultimately accrete

HOW DO STARS FORMS?

Stars form from dense molecular clouds – of dust and gas – in regions of interstellar space known as stellar nurseries.

A single molecular cloud, which primarily contains hydrogen atoms, can be thousands of times the mass of the sun.

They undergo turbulent motion with the gas and dust moving over time, disturbing the atoms and molecules causing some regions to have more matter than other parts.

If enough gas and dust come together in one area then it begins to collapse under the weight of its own gravity.

As it begins to collapse it slowly gets hotter and expands outwards, taking in more of the surrounding gas and dust.

At this point, when the region is about 900 billion miles across, it becomes a pre-stellar core and the starting process of becoming a star.

Then, over the next 50,000 years this will contract 92 billion miles across to become the inner core of a star.

The excess material is ejected out towards the poles of the star and a disc of gas and dust is formed around the star, forming a proto-star.

This is matter is then either incorporated into the star or expelled out into a wider disc that will lead to the formation of planets, moons, comets and asteroids.

They have already used STARFORGE to discover that protostellar jets – high-speed streams of gas – play a vital role in determining a star’s mass.

By calculating a star’s exact mass, researchers can then determine its brightness and internal mechanisms as well as make better predictions about its death.

‘People have been simulating star formation for a couple decades now, but STARFORGE is a quantum leap in technology,’ said Northwestern’s Michael Grudić.

‘Other models have only been able to simulate a tiny patch of the cloud where stars form — not the entire cloud in high resolution. Without seeing the big picture, we miss a lot of factors that might influence the star’s outcome.’

Claude-André Faucher-Giguère, a senior author on the study said the way stars form is a central question to the field of astrophysics.

‘It’s been a very challenging question to explore because of the range of physical processes involved. This new simulation will help us directly address fundamental questions we could not definitively answer before.’

From start to finish, star formation takes tens of millions of years, meaning that when astronomers see it happen in the night sky – they’re only viewing a snapshot in time.

‘Stars also form in clouds of dust, so they are mostly hidden,’ Grudić said.

For astrophysicists to view the full, dynamic process of star formation, they must rely on simulations and STARFORGE gives one of the most detailed views ever created.

The simulations start with a small gas cloud that gradually comes together to form a star, with jets of gas pouring out as it comes together 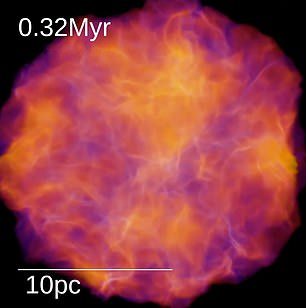 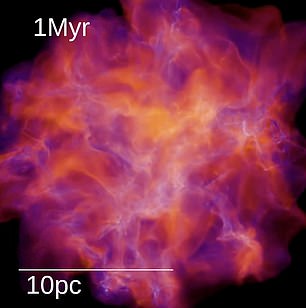 Sometimes taking a full three months to run one simulation, the model requires one of the largest supercomputers in the world, a facility supported by the National Science Foundation and operated by the Texas Advanced Computing Center.

The resulting simulation shows a mass of gas – tens to millions of times the mass of the sun – floating in the galaxy.

As the gas cloud evolves, it forms structures that collapse and break into pieces, which eventually form individual stars. 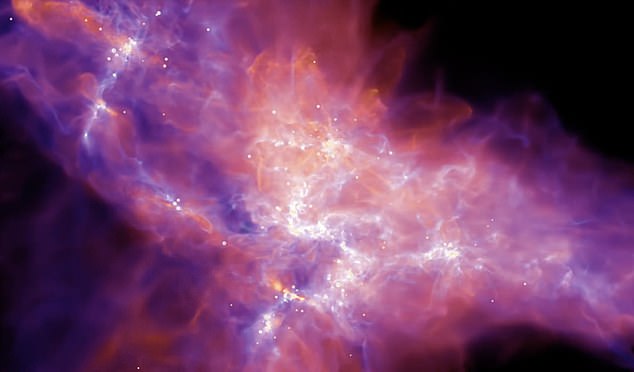 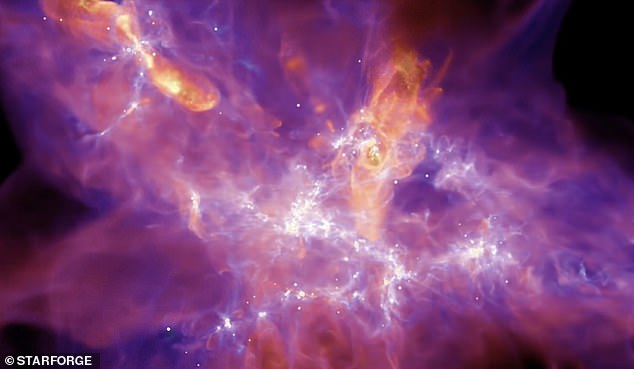 According to our current understanding, a star and its planets form out of a collapsing cloud of dust and gas within a larger cloud called a nebula.

As gravity pulls material in the collapsing cloud closer together, the centre of the cloud gets more and more compressed and, in turn, gets hotter.

This dense, hot core becomes the kernel of a new star.

Meanwhile, inherent motions within the collapsing cloud cause it to churn.

As the cloud gets exceedingly compressed, much of the cloud begins rotating in the same direction.

The rotating cloud eventually flattens into a disk that gets thinner as it spins, kind of like a spinning clump of dough flattening into the shape of a pizza.

These ‘circumstellar’ or ‘protoplanetary’ disks, as astronomers call them, are the birthplaces of planets.

Once the stars form, they launch jets of gas outward from both poles, piercing through the surrounding cloud, a process that ends when no gas remains.

When the researchers ran the simulation without accounting for jets, the stars ended up much too large – 10 times the mass of the sun.

After adding jets to the simulation, the stars’ masses became much more realistic – less than half the mass of the sun.

‘Jets disrupt the inflow of gas toward the star,’ Grudić said, adding that ‘they essentially blow away gas that would have ended up in the star and increased mass.’

‘People have suspected this might be happening, but, by simulating the entire system, we have a robust understanding of how it works.’

Beyond understanding more about stars, Grudić and Faucher-Giguère believe STARFORGE can help us learn more about the universe and even ourselves.

‘Understanding where we come from and how we’re situated in the universe ultimately hinges on understanding the origins of stars.’

‘Knowing the mass of a star tells us its brightness as well as what kinds of nuclear reactions are happening inside it,’ Faucher-Giguère said.

‘With that, we can learn more about the elements that are synthesised in stars, like carbon and oxygen — elements that we are also made of.’

The study has been published in the journal Monthly Notices of the Royal Astronomical Society.