Suburban housewives across America are mobilizing against Donald Trump after the president promised he would win their support come November.

Trump claimed in a tweet on Wednesday that ‘suburban housewives’ would vote for him because he ended a program allowing low-income housing to ‘invade their neighborhood’.

He charged that his rival Joe Biden would reinstall that program in a ‘bigger form’ with Democratic Senator Cory Booker in charge.

‘The “suburban housewife” will be voting for me,’ the president declared.

The tweet drew swift backlash from critics who viewed it as a racist dog whistle, including some of the women he claimed would be happy about the program getting shut down.

In the days that followed, several Facebook groups have cropped up with self-identifying suburban housewives vowing to ensure that Trump doesn’t see a second term. 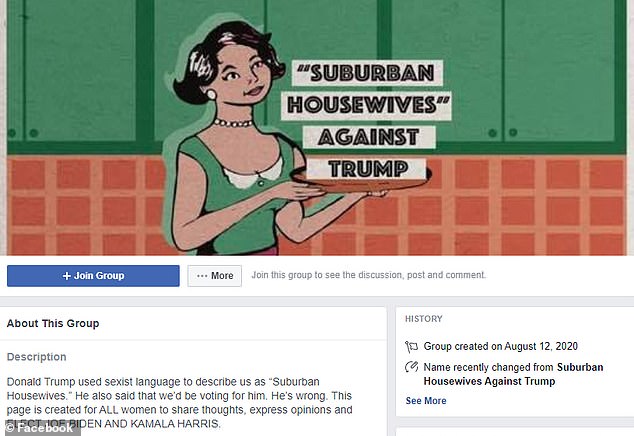 In the wake of Trump’s tweet, several Facebook groups have cropped up with self-identifying suburban housewives vowing to ensure that Trump doesn’t see a second term

One group called Suburban Housewives Against Trump has racked up more than 8,100 members since it was created hours after the president’s controversial tweet.

‘Donald Trump used sexist language to describe us as “suburban housewives,”‘ the description reads. ‘He also said that we’d be voting for him. He’s wrong.’

The group was created by Loni Yeary Gentry, a stay-at-home mother of three from Florence, Kentucky.

Yeary Gentry told the Daily Beast her objective to give Trump critics in her largely-conservative community a space where they could speak freely about the upcoming election.

She said she was surprised to find that group members included several mothers from her children’s Catholic private school who she had assumed would be Trump supporters.

‘I think people may make assumptions,’ Yeary Gentry said. ‘And I think that’s something the president has done, unfortunately, is make assumptions that all white women are going to support him. And we’re not.’ 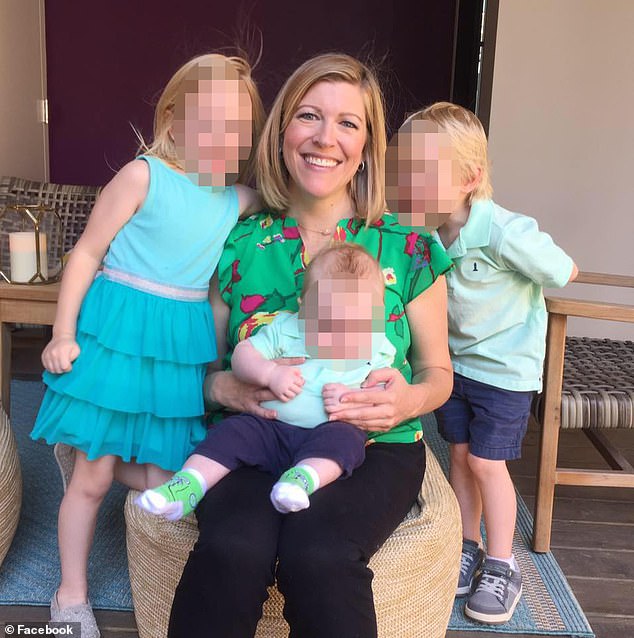 Loni Yeary Gentry, a mother-of-three from Kentucky, created a Facebook group called “Suburban Housewives” Against Trump on Wednesday that now has more than 8,100 members

Middle-age white women proved hugely important in the 2016 election, when Trump won 53 percent of votes in that category.

But recent polls suggest that Trump’s support among suburban women is much lower than it was the last time.

A recent NPR/PBS poll showed 66 percent of suburban women said they disapproved of the job Trump is doing overall – with 58 percent saying they strongly disapproved.

Other polls have suggested that Trump trails Biden by up to 25 percentage points with female voters. 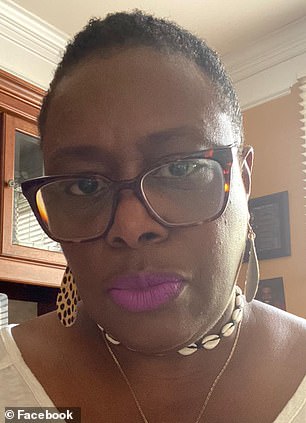 Eager to win the crucial suburban vote this year, Trump has sent more than a dozen female surrogates to suburbs over the past year, using his ‘law and order’ stance to convince families that he is the candidate to keep their communities safe.

However, that strategy appears to be backfiring as suburban areas have become increasingly diverse.

That’s an argument made by Mary Hayes, a black mother-of-three from Virginia who founded a Facebook group called ‘The Real Suburban Housewives for Biden/Harris’.

Hayes said that Trump has managed to alienate a large section of voters in suburbs with racist comments meant to appeal to housewives like her.

Trump acknowledged the growing diversity of suburban areas when asked what he meant by his ‘invasion’ tweet at a press conference on Wednesday afternoon.

‘What I mean is [Biden and Harris are] going to be opening up areas of your neighborhood, which they are already doing and now they want to expand it,’ he said.

‘And they will expand it. They are going to, in my opinion, destroy suburbia.’

Trump was referring to the Affirmatively Furthering Fair Housing rule, a policy created under President Barack Obama that aimed to prevent housing discrimination. Biden has pledged to reenact the rule.

Reacting to assertions that his tweet had racist undertones, Trump noted that 30 percent of people in suburbia are minorities. 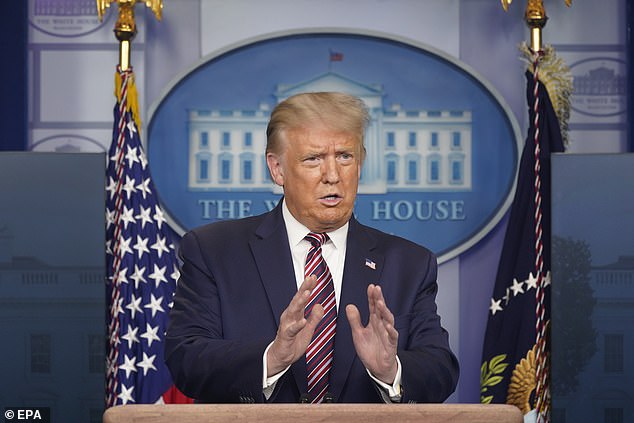 Hayes responded to Trump’s comments by telling the Daily Beast: ‘He might as well have said: “The white housewife will be voting for me because I kept the low income [people], or the minorities, or however you want to say it, out of your neighborhoods.”‘

‘You cannot want to get the vote of somebody and discard certain people in that same community,’ Hayes added.

Some white women, the perceived target of Trump’s tweet, also balked at his use of the term ‘suburban housewife’.

‘I guess I’m a suburban housewife, but I definitely don’t feel that way,’ Jaime Spataro, a mother from the Philadelphia suburbs, told the Daily Beast.

Spataro founded her own Facebook group, ‘Suburban Housewives for Biden/Harris’, which boasts more than 4,200 members.

‘When I hear the term “suburban housewife”, I think of a woman in a dress with an apron in the 1950s, vacuuming with a cocktail ready for her husband when he comes home after work at 5.30,’ Spataro said. ‘That’s so antiquated and out of date.’

The creators of anti-Trump groups are hopeful that they will provide an arena for all of their peers to discuss political issues, rather than merely sharing liberal messages with people who already intend to vote for Biden.

They say they’ve already seen a shift among women who previously voted for Trump – and that many more of their peers are on the fence.

Yeary Gentry said even her mother, who hasn’t voted blue since Jimmy Carter, has decided not to vote for Trump again this year.

‘She didn’t like him then, but she despises him now,’ Yeary Gentry said. ‘And she will vote for Biden this time.’ 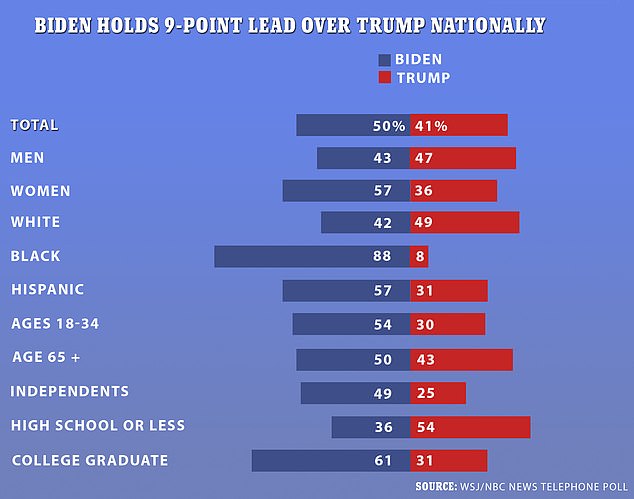 A Wall Street Journal/NBC News poll released Sunday found that 50 percent of US voters intend to vote for Biden this November, compared with 41 percent backing Trump

While various polls have signaled that Biden has a strong lead among female voters, its important to note that the same was said three months before the 2016 election as well.

An ABC News/Washington Post poll from August 2016 found that Clinton was leading Trump among women by a margin of 23 points.

When it came down to it, however, Trump won more than half of the white female vote.

Many Republicans have insisted that this year’s election will see another surge of ‘silent’ voters that go undetected until November 3 arrives.

Tiffany Blythe, a stay-at-home mom in North Carolina who intends to vote red in November, told the New York Times this week that she knows many Trump supporters who are nervous about talking about who they’ll vote for.

For that reason, Blythe doesn’t trust the polls forecasting a big win for Biden.

‘I’m not buying it,’ Blythe said. ‘There are a lot of silent voters, and more will come out before the election. I think a lot of states are turning red from blue, but you don’t hear about that in the media.’

Trump himself has repeatedly made that argument, including on Saturday when he told reporters: ‘We have a silent majority the likes of which nobody has seen.’

But the woman behind the latest ‘suburban housewives’ Facebook groups are sending a clear message: We are not in your silent majority.