An Instagram account documenting the individual quirks of people’s hands on the New York City subway has taken the internet by storm, thanks to its incredibly diverse and unique content.

Set up by 27-year-old photographer Hannah Ryan, the aptly-named Subway Hands account captures a very intimate perspective of subway riders in the city, showcasing nothing more than a hand or two in each image, whether they’re clasped in a lap, or gripping the pole for support.

While the appeal of the account’s rather bizarre – and caption-less – content might not seem immediately appealing, it has thus far left many internet users fascinated, quickly racking up more than 14,000 fans. 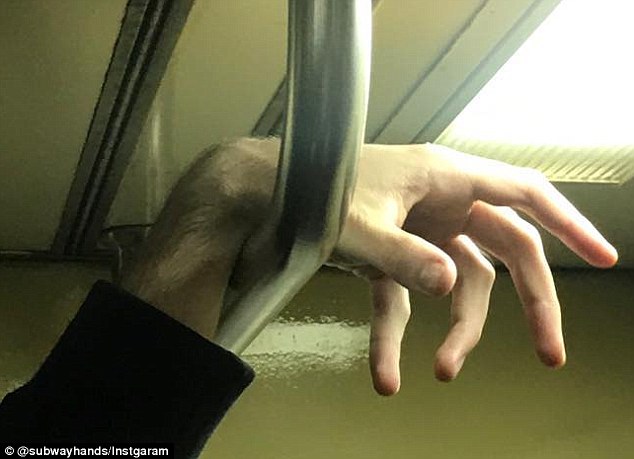 Claw: The account has over 14,000 followers and the pictures are both gorss and mesmerizing like this one guy’s claw 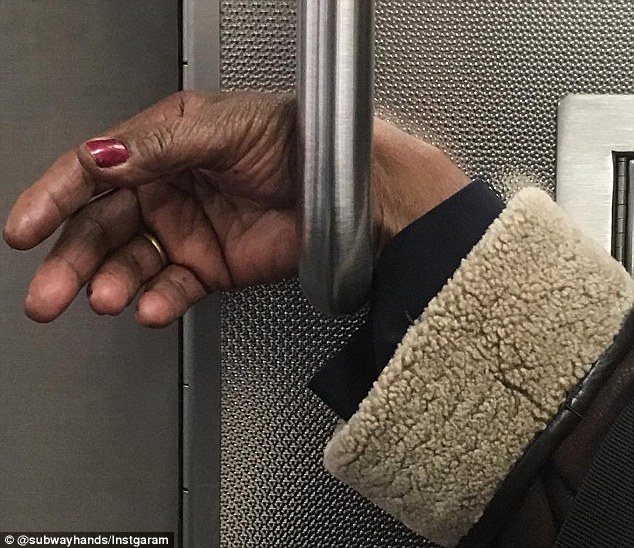 Different: All of the photos on the account show bizarre images of different people’s hands doing different things and even though they have no meaning, it’s mesmerizing 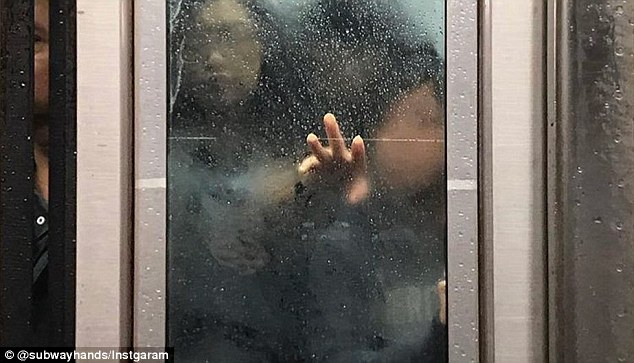 Bye: One picture captures a rider with their hand up against the glass and it was taken at the perfect moment 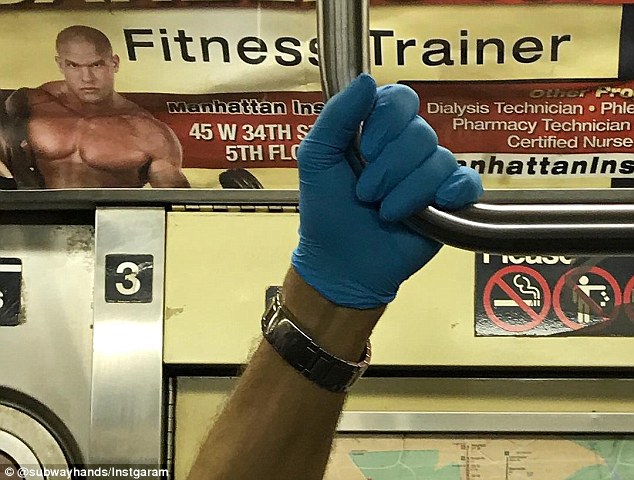 Gloves: One rider seemed to not want to get any germs on his hands and one user commented on the photo saying ‘big mood’ while another wrote, ‘story of my life’ 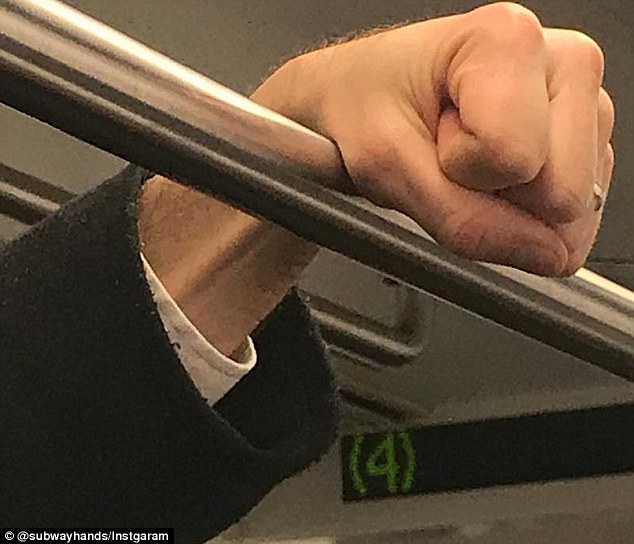 Fist: This rider seemed to be in a very bad mood one day as his hand was balled into a tight fist while resting on the bar

Not alone: One guy tweeted that he’s shocked the account exists because he thought he was the only one who stared at people’s hand grips on the subway

Just by looking at the photos of people’s hands on the Instagram page you can tell what type of mood they were in that day and it’s weirdly mesmerizing.

The best part is that nobody’s face is shown in the pictures and it’s just zoomed in on their hands and in one photo you can tell a guy was angry at the time because his hand was balled into a fist while resting on the overhead bar.

While the pictures are horrifying, it’s the comments from people that are truly hilarious and once you start looking you won’t be able to tear your eyes away.

In one photo a man’s hand is stretched across the bar with his fingers spread, not really touching anything and it received over 2,000 comments.

One person commented on the photo saying, ‘Come to me, Vampira’ while another wrote, ‘When you don’t really want to let your whole hand touch it.’

Another photo shows a woman holding the palm of her left hand against the bar with her fingers spread out so she’s not touching anything and her hand is in the air with a thin diamond band on her ring finger.

Someone commented on the photo joking that it looks like she’s showing off, writing, ‘It’s like stop bragging we get it you’re engaged.’

One user tweeted, ‘This is oddly hilarious’ while another person wrote, ‘I thought I was the only one observing people’s grip in the subway.’ 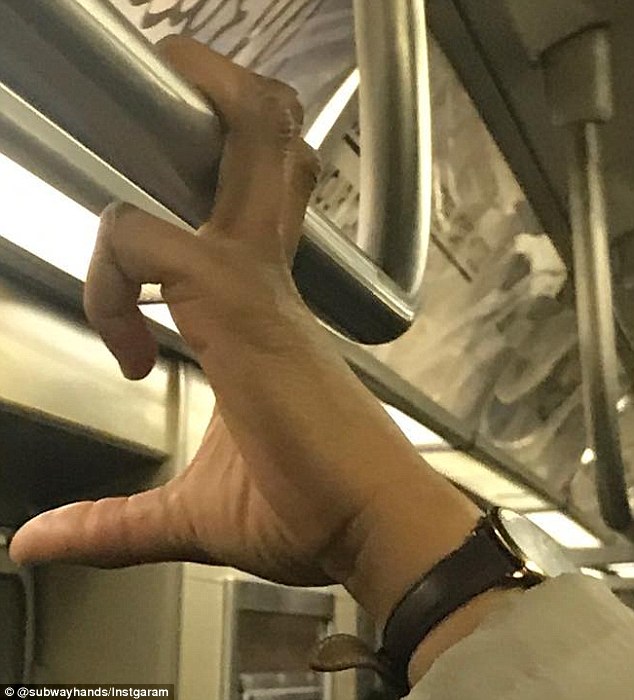 Fingers: Another rider seemed to have a very tight grip on the bar using just two fingers and someone commented on the photo, ‘tense’ 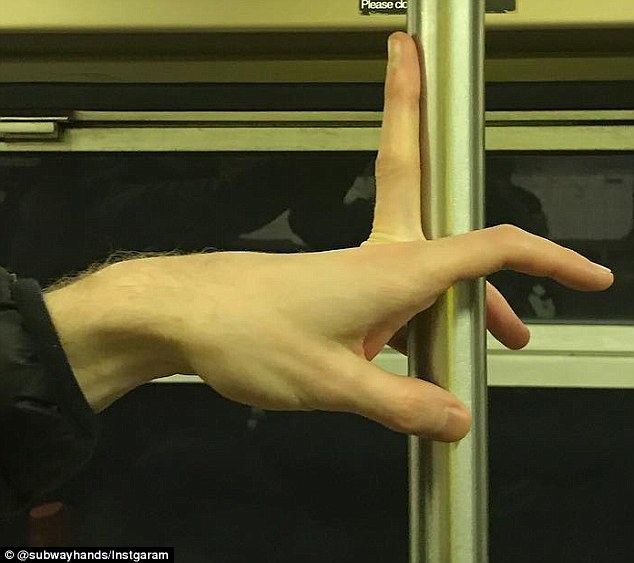 Finger: This bizarre hand grip sees a rider holding with just one finger and one user commented ‘My hand, if it rode the subway’ while another wrote ‘new favorite mood’ 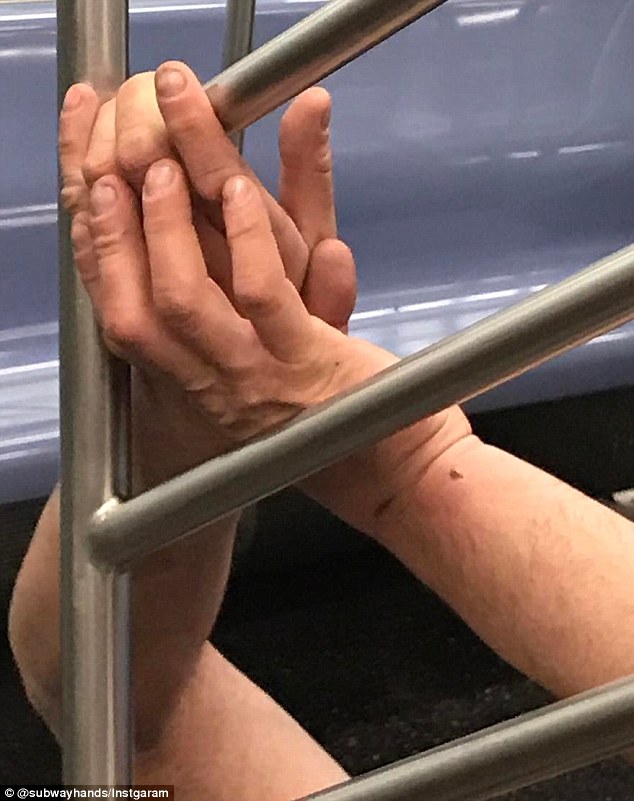 Confused: We’re not really sure what’s going on here and at first it looked like two people’s hands but now it seems this rider is lying down with his hands up 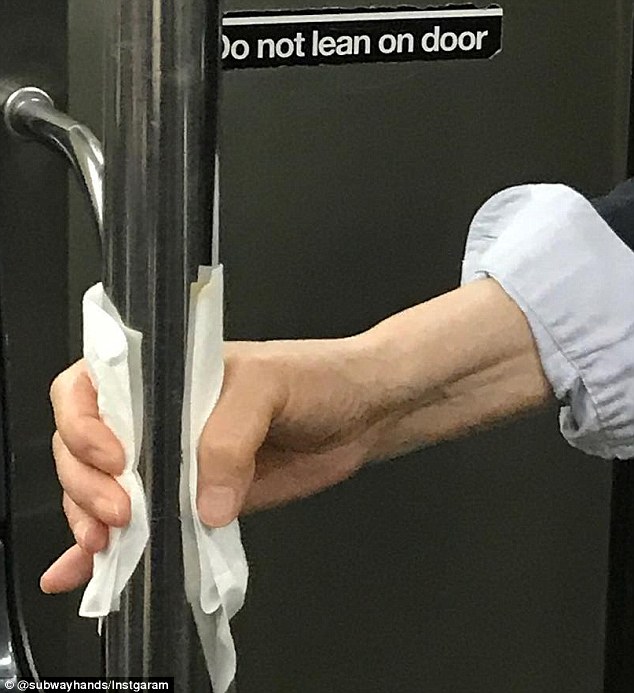 Sick: On this photo of a guy holding the pair with tissues to not get any germs someone hilariously commented, ‘The classic flu season grip’ 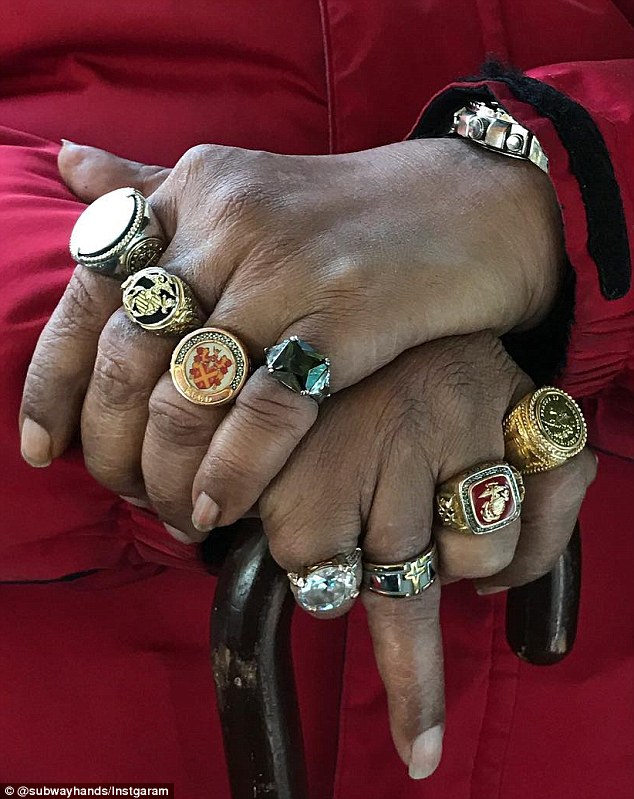 Rings: One rider had a huge ring on each of his fingers and one user commented ‘oh my wow’ while another joked, ‘goals’ 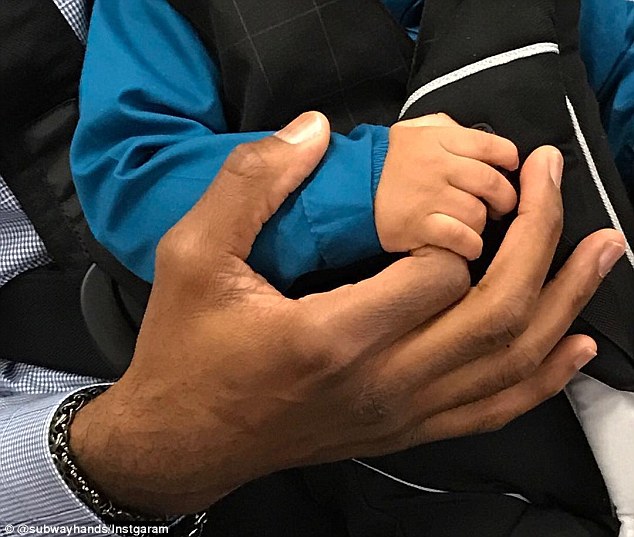 Sweet: In this adorable photo it looks like a father and son were riding together and the little boy is gripping onto his dad’s finger 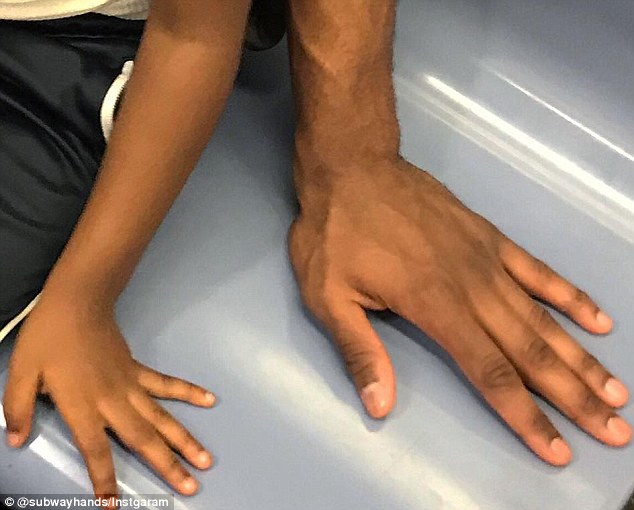 Cute: Another photo of a father-son duo shows these two hands next to each other and it’s adorable 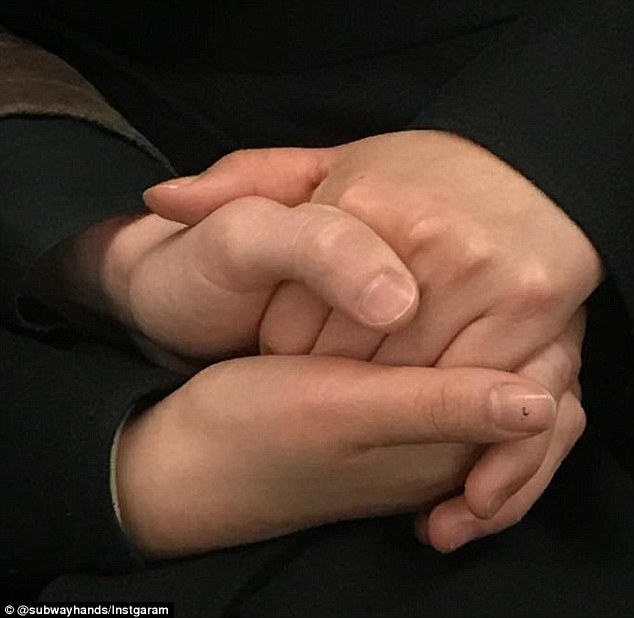 Love: This photo shows two passengers riding the subway holding hands and they seem to really love each other and one user even commented, ‘breathtaking’

Meanwhile another person who was not as amused wrote, ‘This is oddly disturbing’ while someone else shared, ‘This page is creepy.’

In one hilarious photo a man is pictured holding on to the bar with a blue surgeon’s glove on and someone hysterically wrote, ‘The classic flu season grip.’

While the account has become more and more hilarious it didn’t originally start out that way and to most commuters, looking at people’s hands has no meaning other than thinking it’s funny or weird.

However, Hannah was taking a more serious approach to the photos as she told The Creators Project, ‘I’ve always noticed people’s body language and behavior on the subway.’

‘Subway rides bookend our days in New York and people react to that intimacy on a spectrum of extreme comfort to acute discomfort,’ she shared.

‘I started to see how people’s body language was centralized in their hands. Sometimes their gestures hint at mood or inner experience.’

Hannah admitted that she is sneaky when it comes to taking the photos and she will contort her body to get the perfect shot of people’s hands on her cellphone camera.