Adau Mornyang, 25, who went on a drunken rampage on a flight in January, has been behind bars for two months after being arrested by by US Immigration and Customs Enforcement officials

A Sudanese-Australian model who avoided jail in the US over a drunken rampage on a flight has been arrested again and locked up in immigration detention since September.

Adau Mornyang, 25, attacked a male flight attendant, called his colleague a ‘white trash b***h’ and slapped an air host when she was cut off from drinking on a United Airlines flight from Melbourne to Los Angeles in January.

She faced up to 21 years in jail after being found guilty of assault in March, but escaped with 100 hours of community service and three years of probation.

But it’s been revealed the model was suddenly arrested and locked up by US Immigration and Customs Enforcement (ICE) officials in ‘a surprise ambush’ on September 17.

‘Adau was shocked, since she knew she never entered the United States illegally nor overstayed her visa,’ her sister Maria wrote on a GoFundMe page to raise funds to cover her legal costs.

Maria said her sister arrived the United States with a valid 01 visa that expires on December 26, 2021.

‘She’s not in the country illegally,’ she wrote.

A Department of Foreign Affairs and Trade spokesperson confirmed to Daily Mail Australia the department is assisting an Australian being held in US detention. 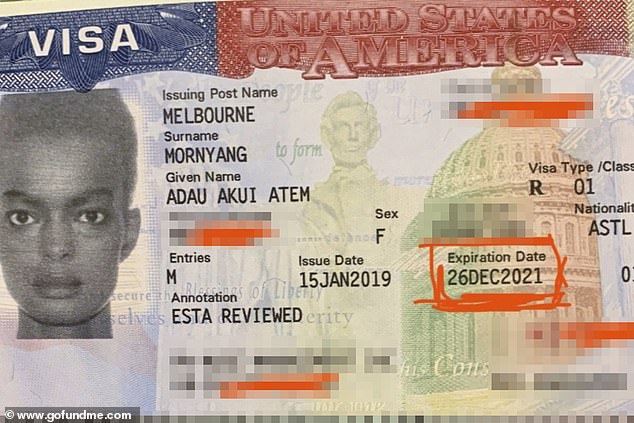 Mornyang was arrested and locked up by US Immigration and Customs Enforcement officials on September 17. But her sister Maria said she arrived the US with a valid 01 visa that expires on December 26, 2021 (pictured) 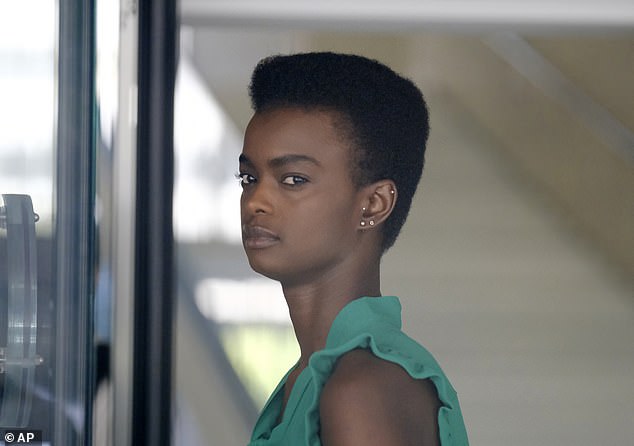 ‘The Department of Foreign Affairs and Trade is providing consular assistance to an Australian detained in the US. Owing to our privacy obligations we will not provide further comment,’ a spokesman said.

The GoFundMe page claims ICE agents revoked Mornyang’s visa without telling her as pay back for her avoiding a prison sentence.

‘This no-jail outcome must’ve infuriated ICE officials who proceeded (without Adau’s knowledge) to revoke her valid visa and subsequently arrested her for being in the country illegally,’ Maria wrote.

‘Meanwhile, a judge never ordered that Adau should leave the country. My sister has been in jail for over two months, she’s not been given any trial since arrest by ICE nor found guilty of overstaying her visa, just kept in jail indefinitely.’ 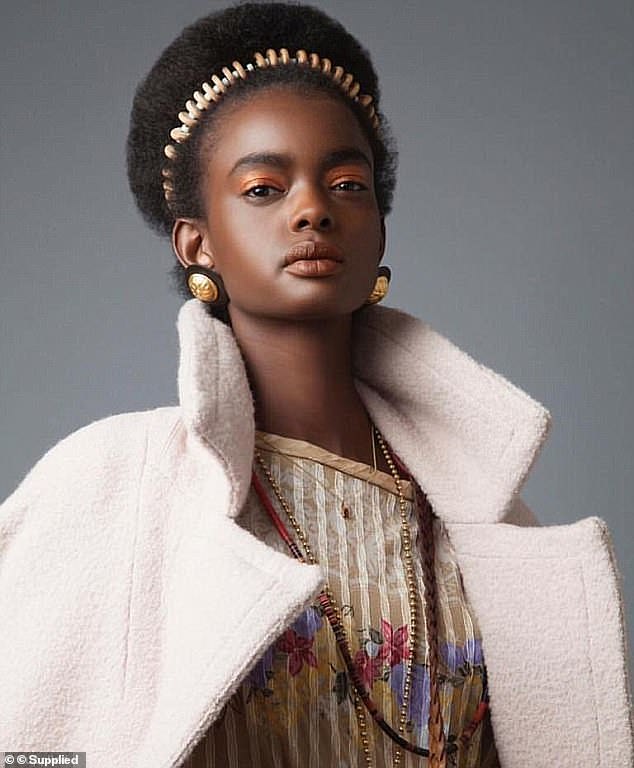 ‘Adau expected that she was going to be deported after her arrest on September 17, 2019 – that didn’t happen either.’

The 25-year-old, who was born in South Sudan before migrating to Australia as a refugee aged 10, was convicted of felony interference with a flight crew and misdemeanour assault.

She was acquitted of a third count of assaulting an air marshal.

Passengers were forced to complain to staff about Mornyang’s disruptive behaviour about nine hours into the flight.

Adau Mornyang’s nightmare in the US: A timeline

January 21: Adau Mornyang is arrested after lashing out at two United Airlines flight attendants during a flight from Melbourne to Los Angeles.

March 24: A Los Angeles jury find Mornyang guilty of a felony charge of interference with a flight crew member and a misdemeanour count of assault. She faced 21 years in prison.

After her trial, she says she doesn’t remember what happened, but might have mixed prescription drugs with too much alcohol during the flight.

June 4: Mornyang asks a Californian judge to throw out her conviction.

June 19: Mornyang loses her bid for a new trial.

July 15: The model is sentenced to 3 years probation and 100 hours of community service

September 17: The 25-year-old is arrested and locked up by US Immigration and Customs Enforcement officials

November 28: Mornyang’s sister Maria creates a GoFundMe account and reveals her sister has been locked up for over two months. She claims ICE agents revoked Mornyang’s visa without telling in retaliation for her avoiding jail time.

She was cut off from drinking more, yelled obscenities and racial slurs, struck a flight attendant, had to be handcuffed by an air marshal, refused to leave a toilet and had to be held at the rear of the plane.

The flight attendant said he was so shocked after he was assaulted he ‘could not physically do anything except sit for nearly half an hour to process what had happened to him’.

Her fellow passengers complained to the crew. But she only lashed out more when flight attendants attempted to calm her, and she slapped one of them. 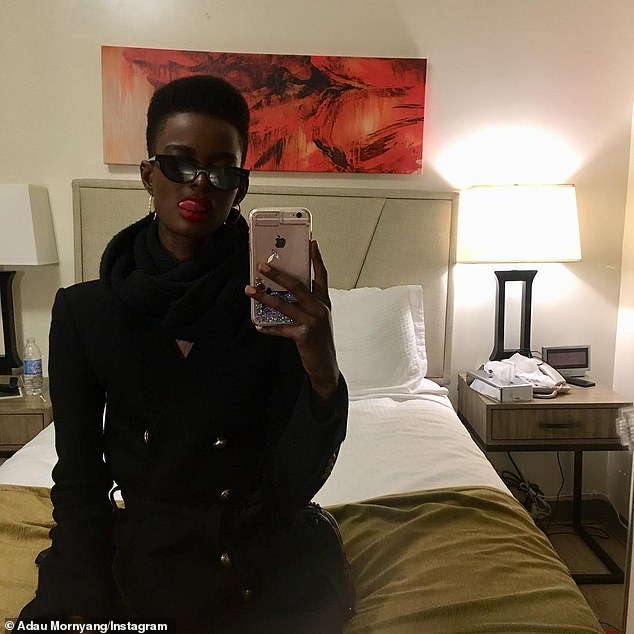 Several air marshals had to come out from undercover to help deal with her, prosecutors said.

The former Miss Australia finalist claimed to have no recollection of the commotion.

‘All I remember was waking up after sleeping for eight hours,’ she said in a text message after the incident.

She claimed to have mixed two glasses of wine with prescription pills to help her sleep, but attendants insisted it was closer to five or six glasses before she was cut off.

Mornyang said at the time: ‘I was so confused and begging and pleading for them to tell me what I did.

‘I was ignored, I was in and out of consciousness, and was later locked up in federal prison still with no memory of what I was arrested for. 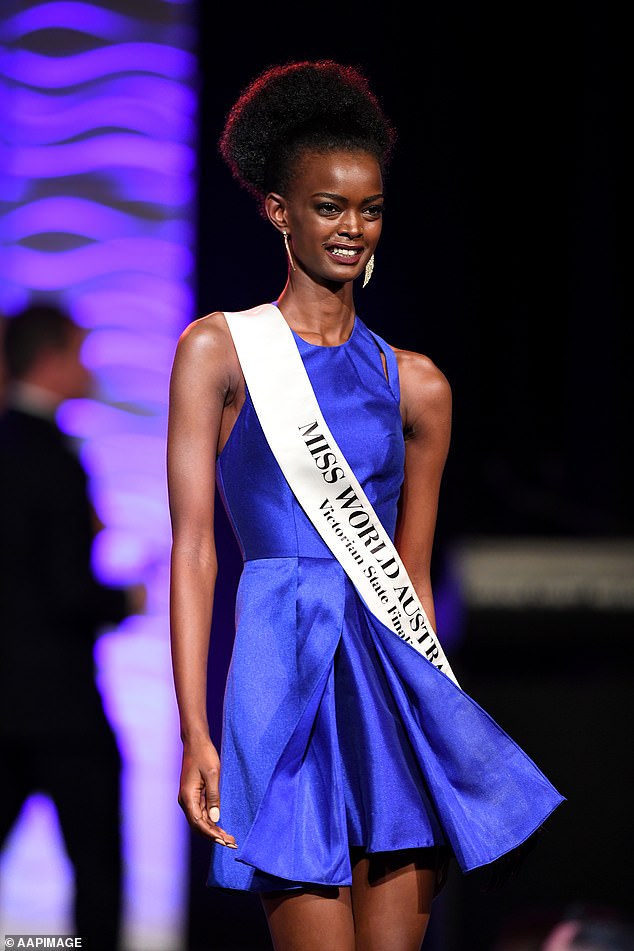 The 25-year-old, a native of South Sudan who migrated to Australia as a refugee at age 10, is in custody in the US after being arrested in September

‘This whole alleged slapping is a big shock to me and I cry every night wondering why I have no memory of it. How I could of done it while asleep,’ she said.

In March a Los Angeles jury found Mornyang guilty of a felony charge of interference with a flight crew member and a misdemeanour count of assault.

Mornyang was required throughout her three-year probation to submit to drug tests and receive mental health counselling.

The model was previously a global campaign face for makeup giant Sephora and was a Miss World Victoria top eight state finalist in 2017.

She arrived with her family as a refugee to Australia when she was ten and used her promising modelling career as a platform to become an outspoken advocate on social issues, particularly in South Sudanese communities.