Suffering a blow to the head raises the risk of dementia

Suffering a severe blow to the head raises the risk of dementia even 30 years later, a major new study concludes.

The findings, derived from data of 995,000 people, is the biggest investigation of its kind into the link between TBIs and dementia.

It showed the more severe the blow, the greater the risk of the incurable disease, according to the analysis led by Umea University.

The results, welcomed by charities, add to the mounting concerns about the dangers of head injuries from playing football, rugby, boxing and American football.

Studies have repeatedly uncovered links between dementia and blows to the head, such as those sustained from contact sports.

And tests have shown former West Bromwich Albion footballer Jeff Astle and ex-NFL star Aaron Hernandez both suffered from chronic traumatic encephalopathy (CTE), which leads to dementia and is caused by repeated blows, before their deaths.

The risk of dementia was shown to be increased by sixfold in the first year after a TBI, the results published in the journal PLOS Medicine show.

It fell rapidly thereafter, but was still 25 per cent higher three decades after the blow to the head was recorded.

Researchers found the overall risk of a dementia diagnosis almost doubled during an average follow-up period of 15 years.

The more severe the TBI, or multiple TBIs, the greater the risk – and the phenomenon was the same for men and women.

Professor Peter Nordstrom, lead author, said: ‘The findings of this study suggest an existence of a time and dose dependent risk of developing dementia more than 30 years after TBI.

‘To our knowledge, no previous prospective study with similar power and follow-up time has been reported.’

However, Professor Nordstrom warned that other factors could have been involved in their findings, and it may not all stem down to TBI.

What have charities said?

Dr Sara Imarisio, of Alzheimer’s Research UK, said: ‘The association between head injuries and dementia risk is one that has gained increasing attention in recent years, with several high-profile sports cases sparking discussion around the topic.

‘This huge Swedish study adds to a growing body of evidence supporting a link between traumatic brain injury and increased dementia risk, although that risk was lower with milder head injuries.

‘The study was not designed to be able to pick apart whether traumatic brain injury was the definite cause of dementia and in-depth studies are now needed to pin down the exact mechanisms behind this link.’

HOW CTE LEADS TO AGGRESSION, EXPLOSIVENESS, SUICIDE AND MEMORY LOSS

HOW DOES IT AFFECT BEHAVIOR?

Researchers are still unclear on how CTE affects behavior, but a growing swell of studies is offering some answers.

‘But more research is needed to fully understand that link and determine whether smaller head injuries can pose a risk too.’

The researchers used data from the Swedish national database from between 1964 and 2012 to make the conclusion.

Nearly one million adults over the age of 50 were monitored, including 164,000 who endured a TBI – which are often caused by road traffic accidents.

To rule out family factors and genetics, 47,000 pairs of siblings were included in the study, with one having suffered a TBI.

The research comes after a Finnish study last year suggested a moderate head injury could double the risk of developing dementia.

A high rate of mild cognitive impairment has been found in some retired American football players, who take many hits to the head in their careers.

And former New England Patriots star Aaron Hernandez had CTE when he killed himself in April at the age of 27 while serving a life sentence for murder.

An array of studies have uncovered similar concerns in football, with repeated blows from headers thought to be the cause.

At least 375 other footballers have been diagnosed and the condition has killed legends such as Jimmy Hill, Jeff Astle and Nat Lofthouse.

An inquest into the death of West Bromwich Albion legend Astle found repeatedly heading heavy leather footballs had contributed to his CTE.

The FA launched a major study into the effect of heading footballs in November. It will track 15,000 ex-players to explore their dementia risk.

Former England captain Alan Shearer fears he may be at risk of suffering dementia due to heading footballs 100 times a day during his career.

The neuroscientist who analyzed Aaron Hernandez’s brain confirmed that he suffered the worst case ever seen in someone so young, with severe damage to regions that affect memory, impulse control and behavior.

The 27-year-old former New England Patriots player killed himself in April 2017 while serving life in prison for murder. 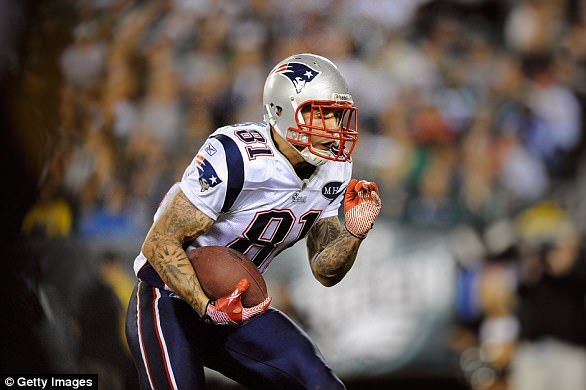 Aaron Hernandez was a star tight end for the New England Patriots on a $41 million contract when he was arrested for double murder. in June 2013. Four years later, while serving life in prison, he took his own life. He was posthumously diagnosed with the worst case of CTE ever seen in a football player

She formally presented her findings a month later, and confirmed that she had never encountered such extreme degradation in a young brain, pointing out areas of severe tissue damage and microbleeds likely caused by blows to the head.

They also found a variant of the APOE gene, which has been linked to increased risk of Alzheimer’s, but the scientists emphasized that no gene could inflict the same damage as years of heavy impact from tackling.

Dr McKee says she could not say for certain that Hernandez’s criminal and suicidal acts were a result of his severe case of CTE, nor whether other 27-year-old players could plausibly have the same pathology. But she says Hernandez suffered substantial damage to several important regions, including the frontal lobe.

‘In this age group, he’s clearly at the severe end of the spectrum,’ McKee said.

‘There is a concern that we’re seeing accelerated disease in young athletes. Whether or not that’s because they’re playing more aggressively or if they’re starting at younger ages, we don’t know. But we are seeing ravages of this disease, in this specific example, of a young person.’

Hernandez was diagnosed with stage three out of four, with four being the most severe. 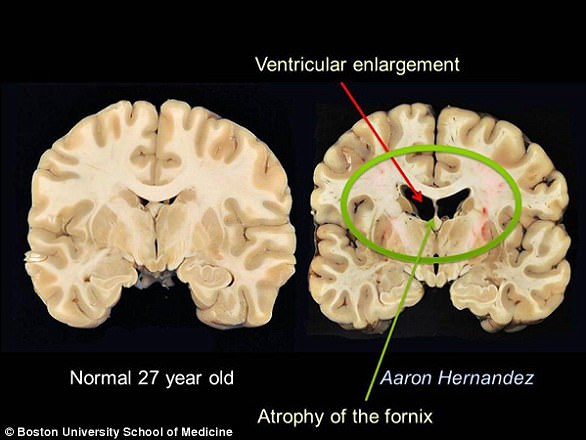 This picture shows a scan of Hernandez’s brain compared to that of a normal 27-year-old. It shows severe decay in the center of his brain from CTE

His brain scans reveal huge clumps of tau protein in Hernandez’s frontal lobes, and in the nerve cells around small blood vessels, a unique feature of CTE.

Dr McKee cautioned that she has not received many brains of players so young who played to such a high level as Aaron Hernandez, who started playing before the age of eight and was regarded as one of the NFL’s top tight ends.

The tests showed Hernandez had early brain atrophy and large perforations in the septum pellucidum, a central membrane which is essential to control behavior.

Hernandez’s brain scans revealed he had a variant of the APOE gene, which has been linked to neurodegenerative diseases like Alzheimer’s, a similar disease to CTE. However, CTE uniquely affects certain nerve cells which Alzheimer’s appears not to. 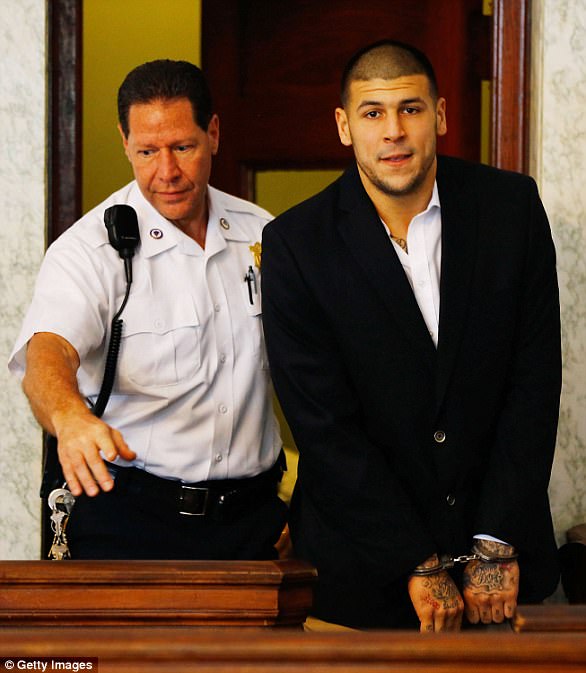 Hernandez was indicted in August 2013 (pictured). He was convicted of first-degree murder, and sentenced to life in prison in April 2015

The disgraced star had a $41 million NFL contract when he was arrested at his home in June 2013 and charged with the murder of a semi-pro football player Odin Lloyd.

Lloyd was the boyfriend of Hernandez’s fiancee’s sister. He was found dead in an industrial park on June 17, 2013, riddled with bullets. Surveillance footage showed Hernandez at the scene an hour before, then arriving at home minutes after gunshots were fired.

In April 2015, Hernandez was convicted of first-degree murder, and sentenced to life in prison.

While in prison, Hernandez was charged with another killing – a double murder committed by a drive-by shooting. But in April 2017, he was acquitted of both charges.

The next day, he took his own life.

His family has since filed a lawsuit against the NFL and the Patriots on behalf of Hernandez’s four-year-old daughter Avielle, claiming the club and the league knew about the connections between football and CTE long before Hernandez was drafted.