Suffering a head injury just once in your life increases the risk of developing dementia by 25 per cent, a study has found.

People with a history of more blows to the cranium are at even greater risk, with two or more head injuries more than doubling the risk of dementia within 25 years.

Women are also more susceptible than men to developing Alzheimer’s following a brain injury, and white people are more at risk than black people, data shows.

The study, published today in Alzheimer’s & Dementia: The Journal of the Alzheimer’s Association , comes as an expert found one player in every international rugby match suffers a brain injury

Football’s concussion protocols are a shambles, according to one of the UK’s foremost brain injury experts.

Professor Willie Stewart told MPs on the Digital, Culture, Media and Sport (DCMS) committee that he could not understand why the sport had chosen not to follow rugby’s path in introducing temporary substitutions and therefore allowing a longer period of time for a potential concussion to be assessed.

He also expressed concern that there was a lack of research into head impacts in women’s sports, given the increased risk to women of concussion, saying: “I don’t think we’re giving it nearly enough attention.”

US-based researchers studied almost 15,000 people over a quarter of a century and obtained data on head injuries from hospital records, and any information volunteered by the participants.

They found the average risk of developing dementia increased by 44 per cent if a person suffered some form of head injury.

Specifically, the risk was 25 per cent higher following one blow and 2.14 times more likely if they suffered two or more.

Evidence showed women who hit their head at least once during the 25 year window were 69 per cent more likely to get dementia than those who had no brain injury.

For men the figure was just 15 per cent.

Black people who suffer a head injury are 22 per cent more likely to get dementia than someone who has avoided blows to the skull. For white people however, the figure is 55 per cent.

The authors are unable to explain the difference between races and genders and say more research is needed to ascertain any causal link.

‘Head injury is a significant risk factor for dementia, but it’s one that can be prevented,’ said lead investigator, Dr Andrea Schneider at the University of Pennsylvania. 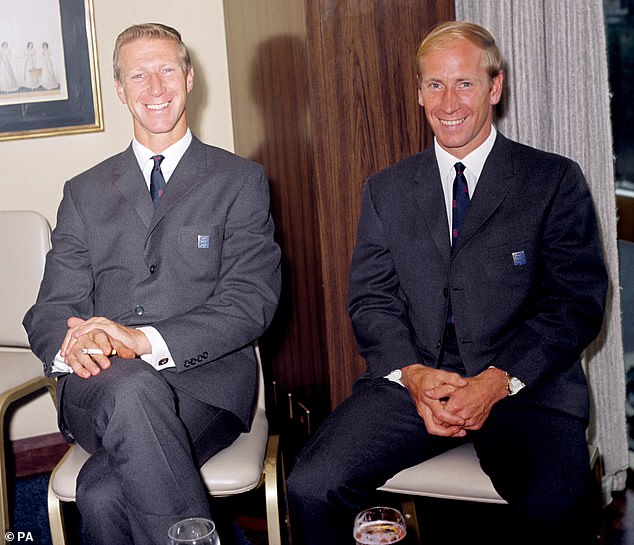 A Daily Mail campaign started last year has drawn attention to the plight of dementia in football.Pictured, 28 football players who have died or been diagnosed with dementia

A study looked at the brains of 35 men who played elite level ice hockey (11)  or American football (24).

They came from a variety of positions, including quarterback, defensive back and linebacker.

It found position played no role in a person’s likelihood of developing CTE.

Dr Lili-Naz Hazrati of the University of Toronto studied the brains.

‘In football, linemen tend to get more concussions than players at other positions; in hockey, forwards do.

‘Also, longer careers have been associated with an increased number of concussions.’

But this study, published in Neurology, was the first to look at the role of position.

The researchers found no correlation between position played and CTE presence.

‘Our results are surprising when you consider previous studies have found upwards of 80% CTE in the brains of football players,’ Hazrati said.

‘More research into factors not related to sports, like genetic factors, stress, drugs or alcohol, may help us understand why different athletes have different susceptibilities to CTE.’

‘The dose-dependence of this association suggests that prevention of head injury could mitigate some risk of dementia later in life.

The study, published today in Alzheimer’s & Dementia: The Journal of the Alzheimer’s Association, comes as an expert revealed one player in every international rugby match suffers a brain injury.

Dr Willie Stewart, a neuropathologist at the University of Glasgow, made the revelation at a parliamentary inquiry into concussion and sport and described the level of injury as unacceptable.

Dr Stewart was giving evidence to the Department of Culture Media and Sport committee, which is interviewing experts and the heads of sports’ governing bodies to establish the link with neurodegenerative diseases, such as dementia.

The academic has done pioneering work to establish a link between football and brain disease. In the round ball game, heading of the ball means former players are 3.5 times more likely to die of neurodegenerative diseases than the general public.

A Daily Mail campaign started last year has drawn attention to the plight of dementia in football.

In recent months, following the death of Nobby Stiles due to dementia, the diagnosis of Bobby Charlton  and death of his brother, Jack.

In the US, repeated head injuries have been linked to chronic traumatic encephalopathy (CTE), a brain condition which has claimed the lives of many former players, including Junior Seau, Mike Webster and Ken Stabler.

The high impact collisions which are common in the support lead to repeated subconcussive hits which over time leads to solidification of some brain tissue.

It manifests itself as cognitive impairment, depression, memory loss and often impulsive behaviour.  It can only be diagnosed after death and through analysis of the brain of the deceased.