If you’re suffering from hay fever for the first time this year, you’re not alone.

There has been a surge in the number of people who report experiencing its symptoms on social media, seemingly out of the blue.

Google trends for hay fever are also at a record high, with twice as many searches for the condition in the UK now compared to five years ago.

There has been a gradual rise in cases in recent decades, linked to modern living, but experts say lockdowns and global warming may have sped up the trend.

Known as the ‘hygiene hypothesis’, the idea is our immune systems are more sensitive to allergens like pollen because we are exposed to fewer germs.

A lack of social contact during the pandemic may have weakened our bodies further, while there is evidence climate change has prolonged the pollen season.

It comes as ‘super pollen’ counts are forecasted across England and Wales this weekend, due to a weather phenomenon known as ‘thunder fever’.

If you’re suffering from hay fever for the first time this year, you’re not alone. Anecdotally there has been a surge in the number of people suffering from its symptoms seemingly out of the blue (file) 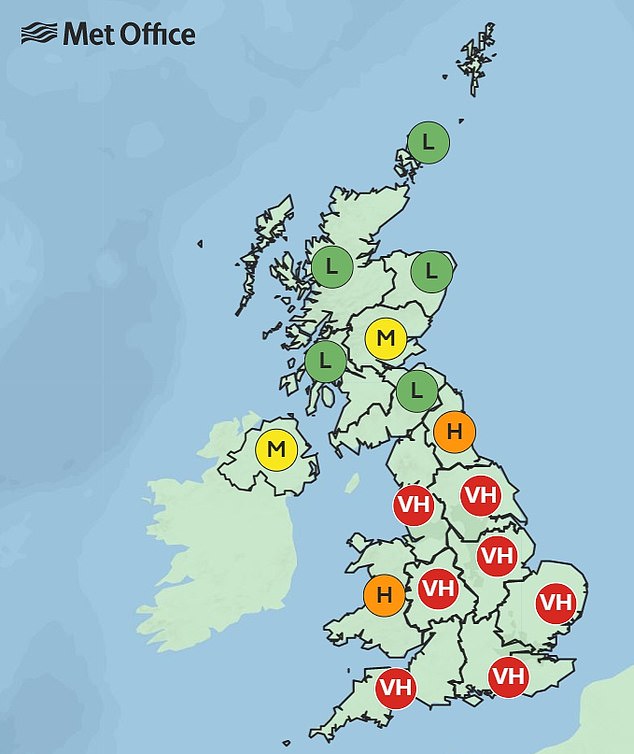 FRIDAY: ‘Super pollen’ counts are forecasted across England and Wales this weekend, due to a weather phenomenon known as ‘thunder fever’, starting on Friday 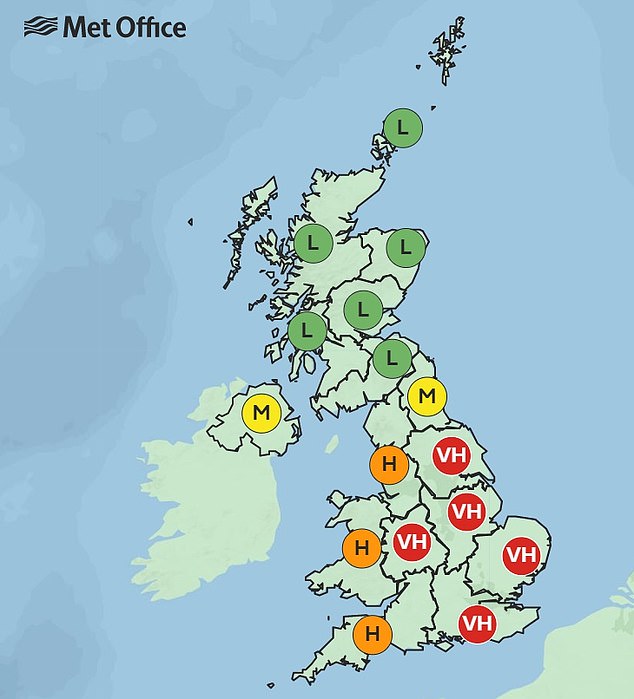 SATURDAY: High counts will continue for the two counties into Saturday but Scotland and Northern Ireland should see low to medium levels 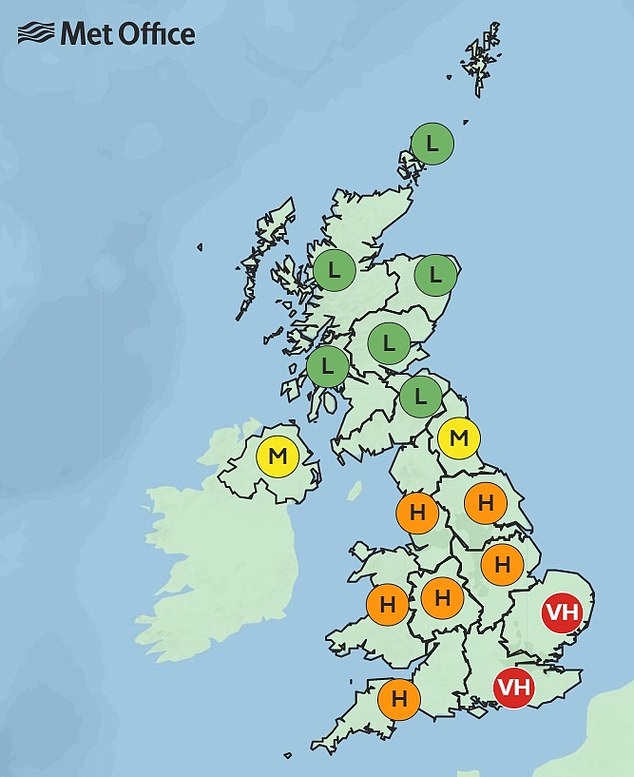 SUNDAY: England and Wales will see ‘high’ levels into Sunday but counts in the South East will remain ‘very high’

GOOGLE TRENDS: The number of Britons googling hay fever has been rising in recent years, reaching a record high in 2021. The numbers represent search interest relative to the highest point on the chart. A value of 100 is the peak popularity and 0 means not enough people were searching for hay fever at the time

‘Unseasonably’ strong winds are expected as the remnants of a tropical storm brings 45mph gusts in some areas.

Pollen counts will be pushed to ‘high’ or ‘very high’ in all of England and Wales from Friday, continuing through the weekend.

The high pollen counts and thunderstorms will trigger ‘thunder fever’, an extreme form of hay fever.

WHAT EXACTLY IS HAY FEVER?

Hay fever is an allergic reaction to pollen, a fine powder which comes from plants.

There is more pollen in the air in the spring and summer when plants are flowering.

The reaction usually happens when pollen comes into contact with someone’s eyes, nose, mouth or throat.

People suffering from the allergy can put Vaseline around their nose to trap the pollen, wear wraparound sunglasses to keep pollen out of their eyes, wash clothes regularly and vacuum and dust indoors.

Avoiding grass, cut flowers and smoke can help reduce symptoms, as can drying clothes indoors where pollen is less likely to stick to them.

Britons have already been documenting their misery on social media, with many claiming they were suffering from hay fever for the first time in years.

According to a poll last year, almost half of the UK population struggle with the condition — nearly double the number previously thought.

Hay fever was previously estimated to affect up to 13million people in the UK, or 30 per cent of the population.

The survey, of 7,000 people by Allergy UK, found more than a third (37 per cent) developed symptoms for the first time in the last five years.

No-one knows exactly why hay fever can appear out of the blue but there are a number of theories.

The most popular is that ultra-clean environments associated with modern lifestyles means we aren’t exposed to as many infections as our ancestors.

Working from home and having limited close contacts during the pandemic is a  ‘plausible’ reason for why more people seem to be suffering hay fever in the last year, according to Professor Paul Hunter.

The medical expert, from the University of East Anglia, told MailOnline: ‘I could imagine that is having an effect.’

He highlighted there has been a rise in ‘super colds’ in recent months coming out of the pandemic because people’s immunity to common infections is weaker.

Another theory is that warmer temperatures in the UK caused by global warming are extending our summers, prolonging the period pollen is released.

Not only does this extend the length of symptoms, it also increases the amount of time people are exposed, says Margaret Kelman, head of clinical at Allergy UK.

She added this ‘leads to more intense pollen seasons, and the increase in air pollution and raised carbon dioxide levels, can contribute to worsening symptoms of allergy in susceptible people’.

Another theory is that sudden hay fever happens when the body is exposed to new surroundings – like moving from the city to the countryside, where there is usually more pollen.

But the same might also be true in people moving from rural to urban areas, with some evidence that pollution can exacerbate hay fever.

According to Statista, four per cent of the entire population moved homes during the first year of the pandemic and a fifth said they were planning a move.

A sudden shock to the immune system could also be a trigger.