A fascinating collection of letters and mementos which belonged to a prominent figure in the Suffragette movement has come to light 110 years later.

The ‘unseen’ archive was compiled by Isabel Seymour who undertook speaking tours on behalf of the Women’s Social Political Union (WSPU), which was founded in 1903.

It includes a resolution signed by their founder Emmeline Pankhurt in 1909 slamming King Edward VII and the Government for continuing to deny women the right to vote. 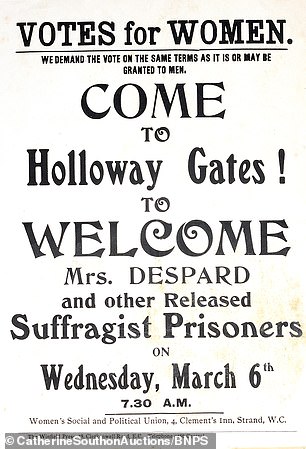 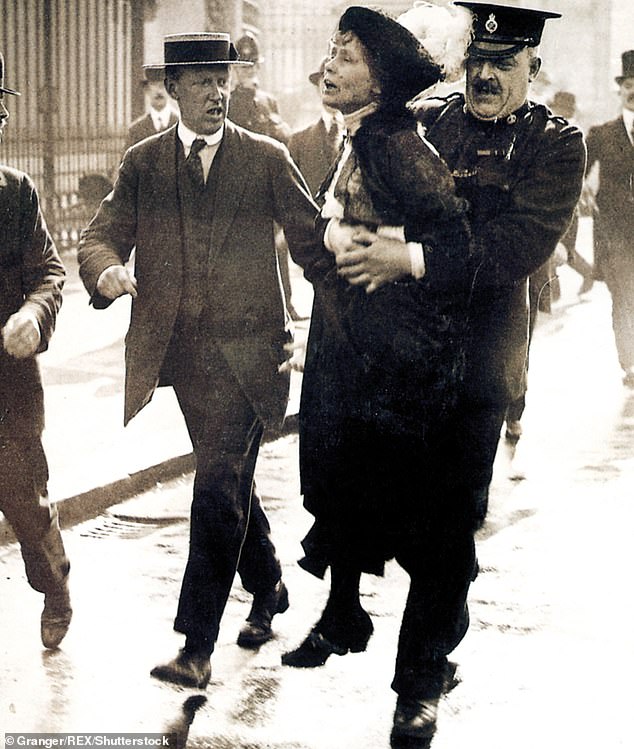 Emmeline Pankhurst was often on the front line of what could be bloody struggles in her efforts to get equality for women. Here she is pictured being dragged away by police as she tried to present a petition at Buckingham Palace in 1914

There are also invitations for a ball organised for women who had been arrested while protesting against the continued inequality of Edwardian society.

The collection has now emerged for sale with Catherine Southon Auctions, of Bromley, Kent.

Auctioneer Catherine Southon said: ‘This previously unseen personal archive gives an insightful look into the day-to-day administration of the WSPU as well as a valuable historic insight into both the suffragette movement, its members and its administrative workings.

‘It is both official and deeply personal at the same time. It contains references to, and documents political marches and protests to the prime minister and Parliament, many of which ended in the incarceration of their members.’ 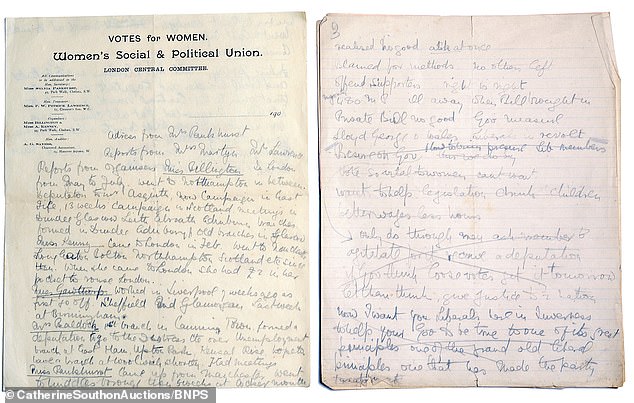 A speech written by Emmeline Pankhurst to the Women’s Social and Political Union. The feminist collection of papers that belonged to prominent suffragette Isabel Seymour has been uncovered after 110 years 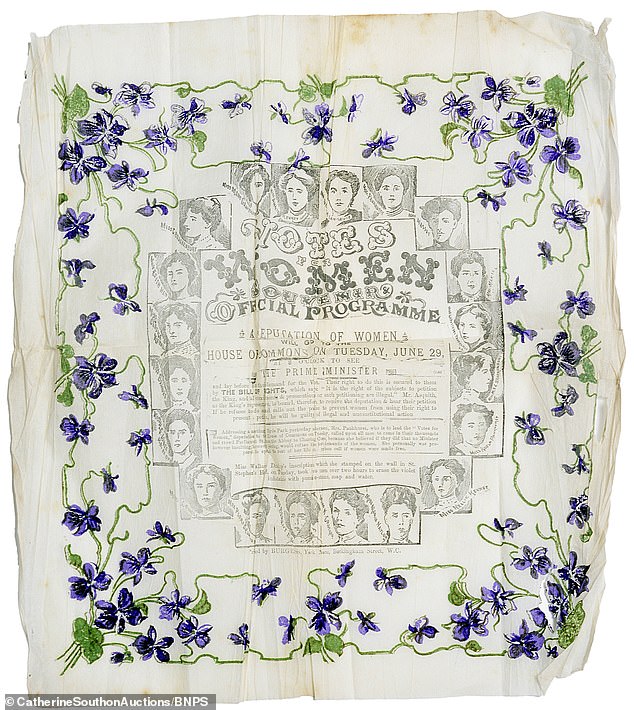 The faces of Suffragettes on a tea towel. The fascinating collection is now being put up for auction with Catherine Southon Auctions, of Bromley, and is tipped to sell for £5,000 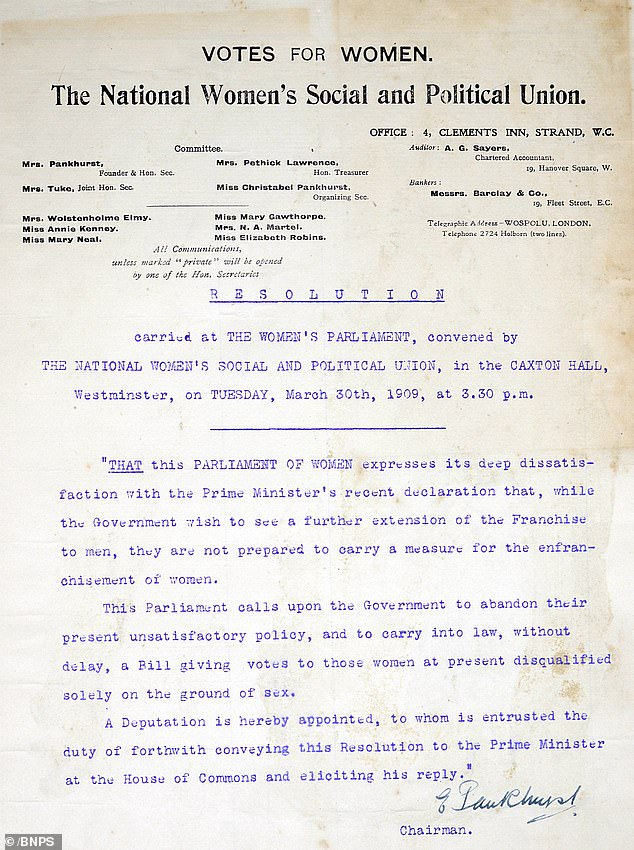 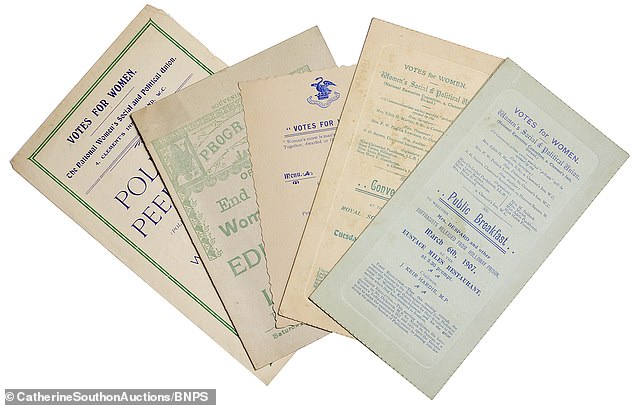 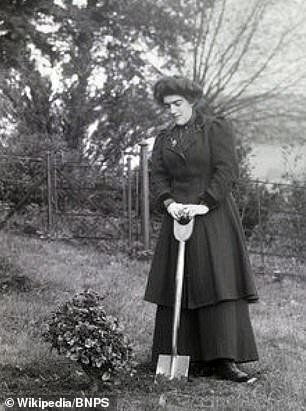 The archive, including Isabel Seymour’s (pictured) scrapbook, was discovered in the garage of a terraced house in Carshalton, Surrey, 30 years ago

The archive features a ‘resolution’, dated March 30, 1909 and signed by Pankhurst, which outlines the Suffragettes ‘indignation’ at their plight.

It then issues a rallying call for women to get the vote ‘on the same term as men’.

The typed letter states: ‘This parliament of women expresses its indignation that while every measure in the King’s speech vitally affects the interests of their sex.

‘And while heavier financial burdens are to be laid upon woman taxpayers, the Government have not included in the programme for the session a measure to confer the parliamentary vote upon duly qualified women.

‘The women here assembled call upon the Government to introduce and carry into law this session a measure giving votes to women on the same terms as men.’ 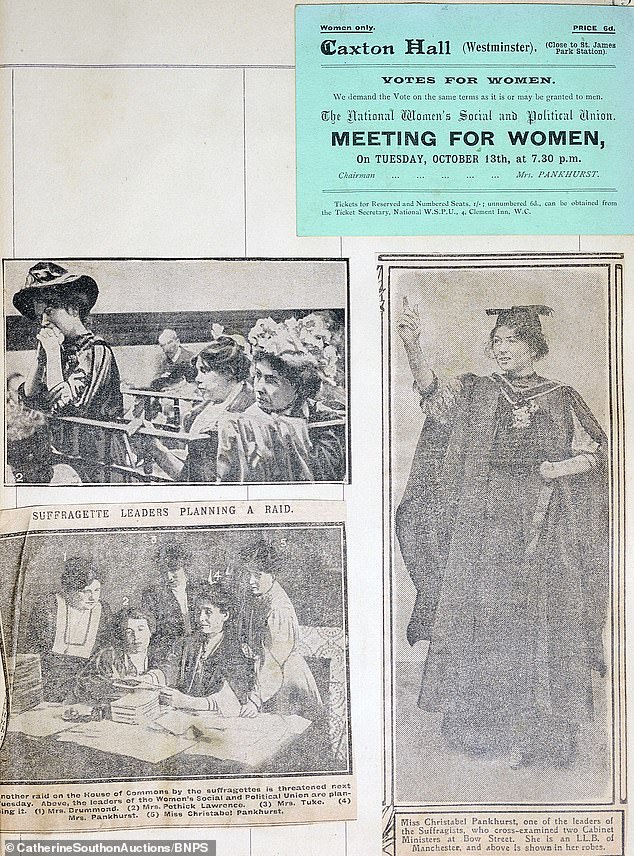 Newspaper cuttings from the archive of Isabel Seymour who was hospitality secretary for the Women’s Social Political Union (WSPU) which campaigned for the right to vote. 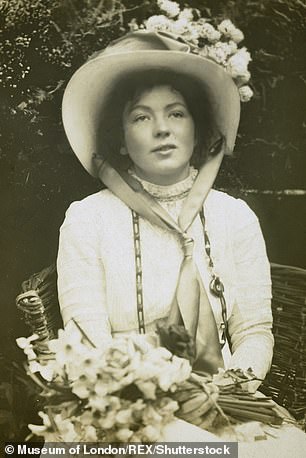 The collection also contains signed instructions from Christabel Pankhurst to women advising them on what to say in court if they ever had to stand in the dock. Here she is pictured in the early 1900s

The collection also contains instructions signed by Christabel Pankhurst for arrested women advising them on what to say to the court when standing in the dock.

Seymour was hospitality secretary for the WSPU and she also kept numerous flyers and tickets for events run by the organisation including dinners and town hall meetings.

The archive, including her scrapbook, was first discovered in the garage of a terraced house in Carshalton, Surrey, 30 years ago.

It ended up tucked away in an attic of a Sussex home and left it to gather dust until the owner’s daughter took an interest in it last year.

Mrs Southon added: ‘At the time the vendor asked his friend ‘what’s this’ and his friend said ‘oh you can have it’ and gave him the archive and the record.

‘He always dismissed it and as he moved from home to home he has always just put it in the loft!

‘He only really took interest when his daughter said that they should do something with it last year as it was the centenary of the Suffragette movement.’ 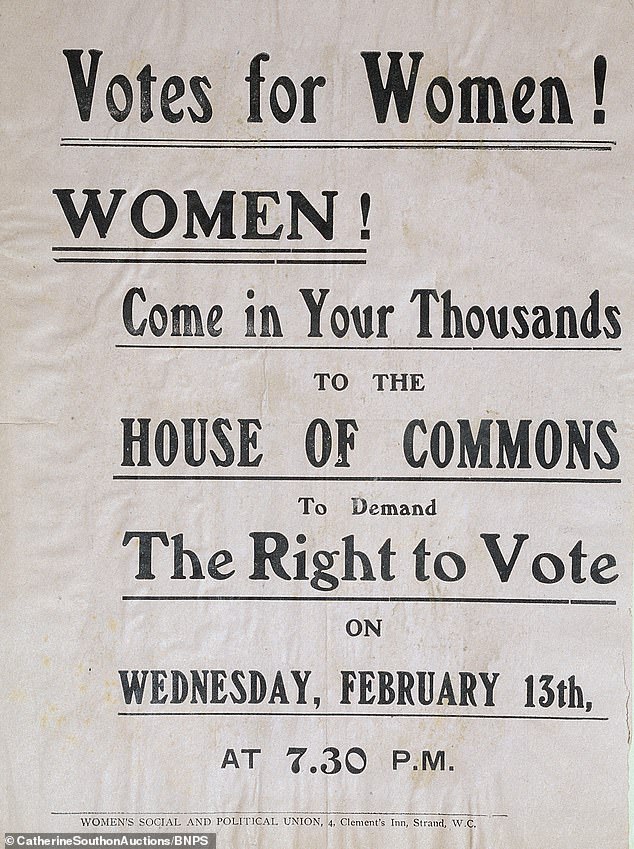 The auction for the valuable collection will take place on February 27 at Catherine Southon Auctions, of Bromley, Kent

The Suffragette movement was founded in 1903 and many campaigners were imprisoned before they were released to help with the First World War effort, which they did with distinction.

In November 1918, months after the conflict ended, women over the age of 30, who met a property qualification, were given the right to vote.

However, it would be another 10 years before this right was extended to all women over the age of 21 under the Equality of the Representation of the People Act.

The sale takes place on February 27.

Votes for Women! The suffrage movement and the often bloody battle for equal voting rights 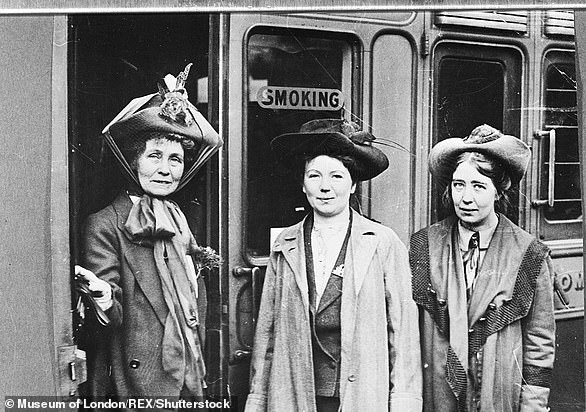 The Suffragettes fought a long and often bloody battle to see women given the right to vote.

1897: The movement officially took off when Millicent Fawcett founded the National Union of Women’s Suffrage.

1903: Emmeline Pankhurst and others, frustrated by the lack of progress, decided more direct action was required and founded the Women’s Social and Political Union (WSPU) with the motto ‘Deeds not words’.

The more militant arm were known as suffragettes while their previous, more law-abiding sisters, were called suffragists.

1905: A turning point for the women was when Christabel Pankhurst and Annie Kenney interrupted a political meeting in Manchester between Winston Churchill and Sir Edward Grey where they unfurled a banner and shouted at the men.

The pair refused to pay a fine saying they would rather be in prison.

Afterwards, the women became more daring, breaking the law and carrying out public stunts to show they would not back down.

Some Suffragettes began to attack politicians and their properties and the violence against them rocketed. Some abstained from more violent protesting.

In prison the women were force-fed in using painful and heavy handed techniques which left many with long-term health problems.

1912: Four suffragists, including Mary Leigh, attempted to set fire to the Theatre Royal while Prime Minister Herbert Asquith was attending a packed show

1913: Emily Davison was the first Suffragette to lay down her life for the movement as she threw herself under the King’s horse, Anmer, on Derby as it rounded Tattenham Corner.

The protests dipped during the war as women supported their nation at the orders of Ms Pankhurst.

1918: The Representation of the People Act passed on February 6, which allowed women over 30 with certain property qualifications to vote