Under-funded suicide prevention hotlines and websites struggle to field demand in the wake of celebrity suicides, a new study finds.

Suicide rates increased 20 percent in the 30 days after Robin Williams’s death by suicide in 2014, according to new data from the National Institute of Mental Health (NIMH).

There was also a 225-percent spike in calls to the National Suicide Prevention Lifeline, the NIMH found.

Meanwhile, there was a 300 percent increase in visits to websites that promote suicide awareness and prevention.

The researchers say the findings show an urgent need for more funding to suicide prevention and crisis mental health services so that workers can handle surges in calls or visits, especially in the wake of a highly-publicized suicide.

Figures released last year from the Centers for Disease Control and Prevention (CDC) found that suicide rates in the US increased by nearly four percent between 2015 and 2016 and by 33 percent since 1999.

There are generally increases in suicides rates in the spring and a second, smaller increase in early summer.

However, spikes can also occur when a celebrity commits suicide, because it’s often seen as a shock.

For the study, published in the journal Psychiatric Services, the team looked at suicide rates within the 30 days of Williams’s suicide on August 11, 2014. 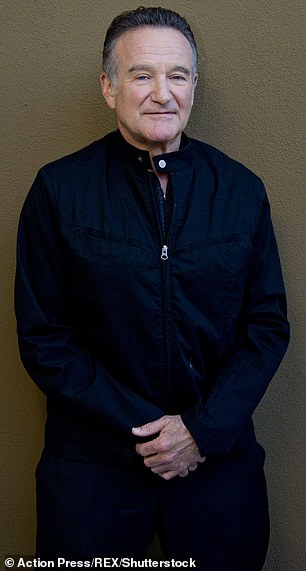 Visits to the websites for the Suicide Prevention Resource Center and Suicide Awareness Voices of Education rose by 300% the day after Williams’s death. Pictured: Williams in October 2013

Using data from the CDC’s Compressed Mortality File, researchers compared the number of deaths by suicide before and after the date of William’s suicide and compared it with the same time frame in 2012 and 2013.

They also studied the changes in the percent of calls the National Suicide Prevention Lifeline was able to answer after the comedian’s death.

But after Williams’s suicide, this increased to average of 142 suicide deaths per day, a spike that did not occur in 2012 or 2013.

Even more shocking, nearly two-thirds of people who committed suicide in the 30 days after Williams’s death used the same method the actor did to kill himself.

‘Unfortunately, we know that celebrity suicides, like that of Mr Williams, can lead to increases in suicides in the general population,’ said lead author Dr Rajeev Ramchand of the Cohen Veterans Network.

‘This study reveals that help-seeking also increases dramatically after these high-profile events, but that available crisis services may be insufficiently resourced to meet this demand.’

The team also found that calls to the National Suicide Prevention Lifeline spiked by 225 percent the day after Williams’s suicide.

Data showed that the week before Williams died, about 4,000 to 6,000 calls were received by the hotline per day – and nearly 75 percent were answered.

The day after Williams’s suicide, almost 13,000 calls were made to the hotline, with just 57 percent of them answered. 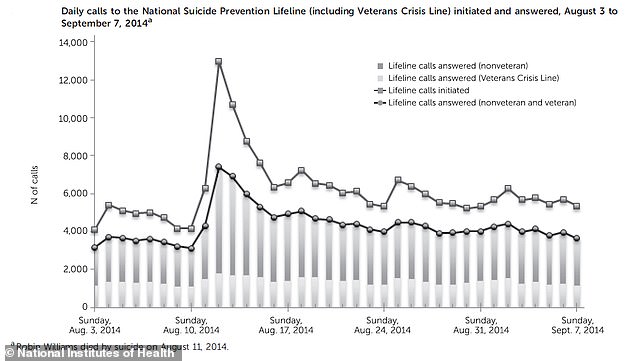 Calls to the National Suicide Prevention Lifeline averaged 4,000 to 6,000 per day with nearly 75% answered the week before Williams died. The day after he died, almost 13,000 calls were made to the hotline, with just 57% of them answered

Another spike, after the death of Williams, came in visits to the websites for the Suicide Prevention Resource Center and Suicide Awareness Voices of Education.

In the week before the actor’s death, the two websites averaged a combined 3,200 visits.

The day after Williams died, on August 12, there were more than 15,000 visits to either website, and the average remained high for the remainder of the month.

The authors are calling for additional funding to be allocated to crisis mental health services so that operators can handle a potential influx of calls or visits.

‘We need to ensure these services have sufficient resources to serve the public 24/7, especially in times of increased demand.’