Suicides among American teenagers rose during the first year of the COVID-19 pandemic, data from a study shows — but rates fell among adults.

Researchers, led by the Massachusetts Institute of Technology, in Boston, found there were 903 suicides among 10 to 19-year-olds across 14 states in 2020 — up eight percent on the 835 suicides average for the previous five years.

For comparison, the number of suicides recorded overall fell two percent to 13,900 over the first year of Covid, from about 14,200 previously.

Scientists warned youngsters struggling with bereavement after losing parents and grandparents to Covid may have led to the rise. They called for more funding for children’s bereavement services.

The U.S. has recorded nearly a million deaths from Covid since March 2020, the most out of any country in the world.

Researchers led by Massachusetts Institute of Technology found there were 903 suicides among 10 to 19-year-olds across 14 states in 2020, up eight per cent on the 835 suicides average for the previous five years (shown above) 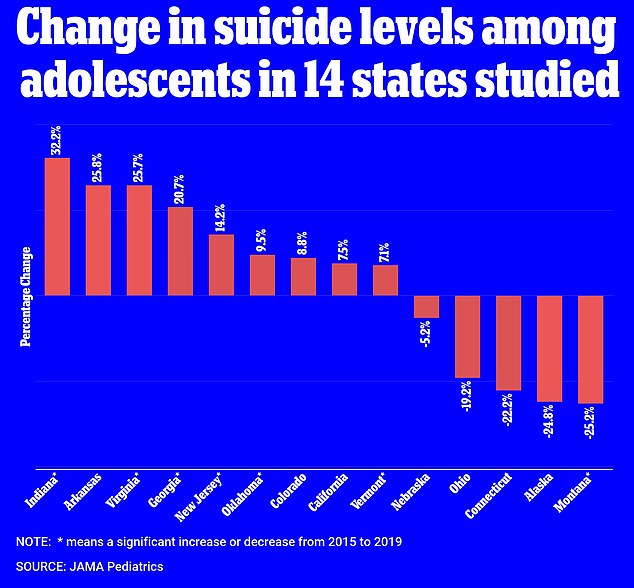 Indiana saw the biggest rise in suicide rates among adolescents, followed by Arkansas and Virginia. At the other end of the scale was Montana, Alaska and Connecticut. The * means there was a significant different between data for 2020 and the previous five years

In the study — published today in JAMA Pediatrics — scientists looked at 85,000 suicides recorded since 2015.

Data was from 14 states that the scientists said were nationally representative of the entire country.

There was at least one state from each of the ten U.S. Department of Health and Human Services health regions, and together the states represented almost a third of the population. Researchers said they would expect to get the same results if they included the other 36 states.

Why might suicide rates have risen among adolescents in the first year of the pandemic?

Data from 14 states in the U.S. shows an uptick in suicides compared to the average for the previous five-year period.

The reason for this uptick is not clear, although experts have suggested bereavement may be behind the rise.

Dr Maimuna Majumder, a computational epidemiologist at Boston Children’s Hospital, told DailyMail.com: ‘The death of a loved one is never easy to cope with, but it’s even harder for kids who might be coping with the death of a parent or grandparent.’

She pointed to figures showing almost one million Americans have died from the virus since the pandemic began.

In the analysis, scientists compared the average for adolescent suicides between 2015 and 2019 to those recorded in the first year of the pandemic.

Although there was an uptick in 2020, this was not a significant difference overall suggesting the rise may be down to other factors.

But the proportion of all suicides that were among 10 to 19-year-olds rose significantly, suggesting the pandemic played a role.

Of the 14 states included, nine saw suicides among adolescents rise in 2020 compared to the previous five years.

Indiana saw the sharpest rise in its adolescent suicides (up 32 percent), alongside Arkansas (25 percent) and Virginia (25 percent).

On the other end of the scale Montana recorded the biggest drop in teenage suicides (down 25 percent), followed by Alaska (24 percent) and Connecticut (22 percent).

Only one state — Montana — had a significant result in 2020 compared to the previous five-year period.

Dr Maimuna Majumder, a computational epidemiologist at Boston Children’s Hospital who was involved in the study, told DailyMail.com that the uptick may be down to bereavement.

‘In the U.S., nearly one million people have died from Covid, and estimates suggest more than 140,000 kids in the U.S. lost at least one parent or grandparent to Covid between April 2020 and June 2021 alone,’ she said.

‘The death of a loved one is never easy to cope with, but it’s even harder for kids who might be coping with the death of a parent or grandparent.

‘The impact that such widespread loss of life is having on society — and on kids — is difficult to overstate.’

Dr Majumder and other researchers called for more funding for bereavement services for children.

The Centers for Disease Control and Prevention has previously found attempted suicides among adolescent teenage girls jumped 50 percent in May 2020 compared to the same period in 2019. Among boys, they ticked up just under four per cent.

They said this suggested more teenage girls were in ‘severe distress’ during the pandemic.

Experts had warned at the beginning of the pandemic that lockdowns and isolation rules would trigger an uptick in suicides. But evidence this was the case has been patchy, with some countries actually reporting the reverse.

How did adolescent suicide rates change in each of the 14 states?

This data is from each state’s department of health, and reported in a study in the journal JAMA Pediatrics. It is for the age group 10 to 19 years old.

Abbreviations: Sui. = suicides, and the * shows when the difference was statistically significant.