Philip Hammond’s £1.6billion package for the high street is a major victory for the Daily Mail – and the country.

For months this newspaper has been campaigning for help for our distressed high streets, these vital arteries of commerce that run through our towns and cities, and which have fallen into a perilous state as they battle the double whammy of aggressive online competition and crippling rates bills.

Even middle-class stalwarts such as John Lewis have seen their profits dwindle away to virtually nothing.

The gulf between the costs faced by traditional bricks and mortar stores and online retailers is vast.

No wonder that ailing 6313511– which last week reported record losses of nearly £500million and plans to close down 50 stores – was among the distressed retailers begging the Chancellor for a helping hand. It paid a rates bill of £80million on its 166 shops last year, compared with an estimated £14million paid by the highly profitable Amazon on its 14 warehouses in England and Wales.

It isn’t just big businesses that are suffering – it is small shops that are really bearing the brunt. People at the sharp end, like Mark Rayner, manager of the Ashworth and Bird menswear shop in Barnsley, South Yorkshire. He recently told the Mail how difficult it was to compete with online giants such as fashion retailer Asos, which has its vast warehouse just a few miles away from Barnsley’s ailing high street, where stores hand over a large portion of their takings in rates. 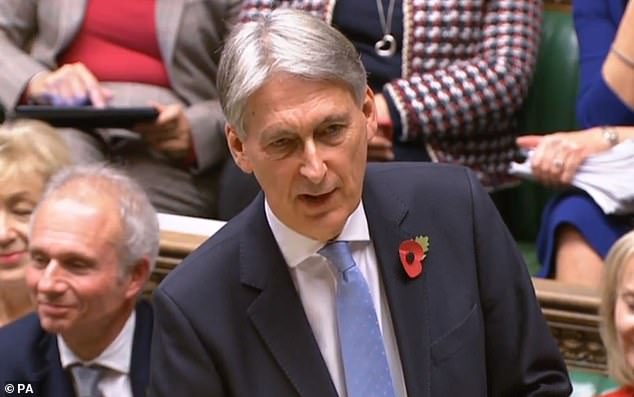 Bills will be cut by a third on properties with a rateable value of less than £51,000, which covers nine out of ten premises, for two years starting next year.

Hammond has thrown small retailers another lifeline by keeping the VAT threshold at £85,000. There had been widespread speculation he would lower the level at which firms were drawn into the net, heaping red tape and admin on thousands more small shops. Thankfully, he chose to give them a break, to sighs of relief all round.

The Chancellor has also invested £675million in a ‘Future High Street Fund’ to spruce up local town centres plus around £900million on business rates relief.

The cash tills are also more likely to be ringing because shoppers will have more cash in their pockets to spend, as the Chancellor is raising the amounts people can earn before they pay higher rate tax, and before they come into the tax net at all.

And, most importantly, Philip Hammond deserves the thanks not only of retailers but of every taxpayer in Britain for having the guts to take on the powerful Silicon Valley giants who have prospered so richly in this country. Never have companies made so much from so many, while paying so little in tax.

Which high street retailers have closed shops in 2018?

Carpetright: The carpet retailer is closing 92 stores across the UK. These closures represent nearly a quarter of all UK Carpetright stores.

Toys R’ Us: The UK’s largest toy shop went into administration in February 2018, leading to an estimated 2,000 redundancies.

House of Fraser: The department store chain was on the verge of heading into administration but was rescued at the eleventh hour by Sports  Direct owner Mike Ashley.

Maplin: The electronics giant has gone bust, closing shops across the country and putting thousands of jobs at risk.

Mothercare: The baby and toddler chain is closing 60 shops across the UK putting up to 900 jobs at risk.

Poundworld: Poundworld announced it was going into administration on June 11 after talks with potential buyer R Capital broke down, putting 5,100 jobs at risk.

Homebase: The DIY chain is closing 42 stores, putting up to 1,500 jobs at risk

Critics doubted Hammond would dare to take the first step in putting a stop to the ridiculous situation where gigantic American online businesses make billions of sales and harvest huge advertising revenues here, but make next to no contribution to our society. He has proved those doubters wrong.

Under the existing system, the tech behemoths have been paying puny sums in UK corporation tax. Amazon’s bill was just £4.67million last year and Facebook’s a derisory £15million.

These sums are, when set against the multi-billion revenues they have racked up, quite patently pathetic. So Hammond’s move to raise more than £400million a year through a two per cent tax on revenues, starting from April 2020, is a first step to righting an obvious wrong. True, the sums are small in the context of the needs of the NHS, for example, but they are a lot more than the Exchequer is receiving from the tech companies now – and more importantly, they are a major move in the right direction.

Hammond has listened to the retailers and taken action – unlike finance ministers in other countries similarly affected.

The tech tax is not – as the digital giants and their cheerleaders forlornly try to argue – an anti-business measure: it is a matter of simple fairness.

Amazon, Facebook et al have changed our lives and brought many benefits including creating jobs in Britain.

But in making their profits here, they have availed themselves of our public assets: our road and rail infrastructure, our legal system, our education and health provision that look after their staff.Bricks and mortar businesses contribute to these benefits, and so should the digital operators. Now they will have to.