Sunderland manager Lee Johnson has claimed that the heart problems affecting his goalkeeper Lee Burge could have been caused by his Covid vaccine.

Burge, 29, has been ruled out of action for the League One side for around five weeks because of an ‘inflamed heart’.

The goalkeeper was one of a number of Sunderland players to contract Covid-19 at the start of January but, while the others have returned to action, Burge has been unable to because of a lingering heart problem. 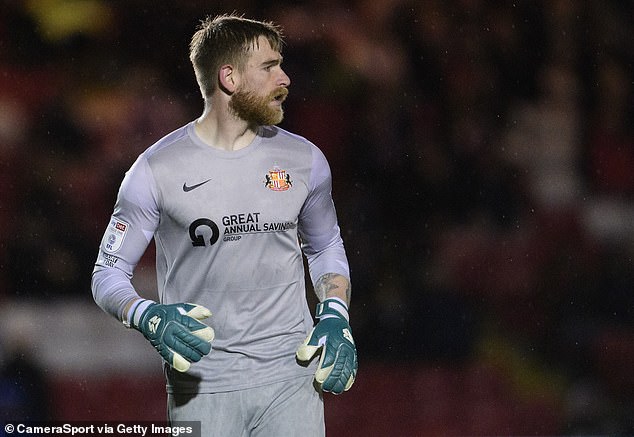 According to The Mirror, Burge has been told, as part of his treatment, that he must not let his heart rate rise above 100 beats-per-minute during light training sessions.

Research by the British Heart Foundation states that there have been ‘rare cases of myocarditis’ – which is inflammation of the heart muscle – after people have had the Moderna Covid vaccine.

Cases are found ‘even more rarely’ in those members of the public who have been given the Pfizer vaccine.

Of those cases of myocarditis after a Covid jab, the British Heart Foundation has found that they have ‘usually been mild’ with heart function ‘returning to normal’ in most.

But Johnson said in his pre-match press conference on Friday that it ‘seems to happen a lot after these injections or Covid’.

The 40-year-old said: ‘It seems to happen a lot after these injections or Covid.

‘The weighting would be on Covid but you can’t rule out, I suppose, vaccination.

‘I don’t know, I am not a doctor. I get the information and the first thought is the player. Is he fit and well and survives it well and has a long career.’

Johnson then slightly retracted his views, admitting it is ‘probably the Covid’ that has caused the issue.

He added: ‘That’s probably slightly controversial. I don’t know the answer. I would be ill advised to make quotes like that.

‘Burge was not particularly happy the way he felt during that period. That could be a cross over when he had Covid and when he had the vaccine. We don’t exactly know what caused it, it is probably the Covid.

‘He has 4-5 weeks when he has to keep his heart rate below 100bpm and have blood tests and hope it goes back to normal.

‘The care of the individual has to be at the forefront. Respect goes to the physio and dr department. We don’t want something dreadful happening. Any sign of heart fluttering or not feeling right and we have the right checks and it is flagged up. He should make a full recovery.’

Data from December showed that around 75 per cent of players in the EFL – in which Sunderland play – have been either fully vaccinated, have had a single jab or were intending to be vaccinated.

Double vaccinated players totalled 59 per cent, 16 per cent were set to get the jab, while 25 per cent of players did not intend to get a vaccine at that time.