Sunrise host Edwina Bartholomew had a perfect response to an Instagram troll who told her to ‘shut up’ about Meghan Markle.

The newsreader, 37, had unleashed on the pregnant Duchess of Sussex on Wednesday, after Ms Markle’s friends claimed she wasn’t attending Prince Philip’s funeral because she ‘doesn’t want to be the centre of attention’.

After footage of her rant went viral, Sunrise viewers weighed in on social media – and one comment in particular rubbed Bartholomew the wrong way.

Hitting back: Sunrise host Edwina Bartholomew (pictured) had a perfect response to an Instagram troll who told her to ‘shut up’ about Meghan Markle

‘Edwina should shut up,’ they commented.

Responding from her verified Instagram account, the journalist fired back: ‘I agree, Lynda. I sincerely hope they [the Sussexes] reconcile with the [Royal] family this week and we can all shut up about it.’

Bartholomew had criticised Ms Markle on air on Wednesday, after sources close to the American-born duchess said she wasn’t attending Prince Philip’s funeral because she didn’t want to make the sombre occasion all about her.

Markle did not travel to England with her husband, Prince Harry, to join his family in mourning ahead of the Duke of Edinburgh’s funeral, and instead opted to stay at their home Montecito, California.

‘Shut up’: After footage of her rant about Ms Markle went viral, Sunrise viewers weighed in on social media – and one comment in particular rubbed Bartholomew the wrong way 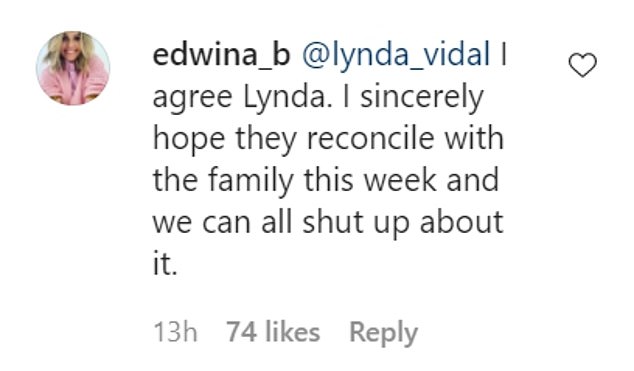 Clapback: Responding from her verified Instagram account, the journalist fired back: ‘I agree, Lynda. I sincerely hope they [the Sussexes] reconcile with the [Royal] family this week and we can all shut up about it’

In addition to not wanting the spotlight, a Buckingham Palace spokesperson previously confirmed Meghan ‘has been advised by her physician not to travel’ because she is six months pregnant.

Bartholomew was less than impressed by the recent revelations from Ms Markle’s camp, telling the Sunrise panel it ‘really gets my goat’.

‘I’ve reserved judgment about those two for quite some time, but if that is true, it just makes me so angry,’ she said. 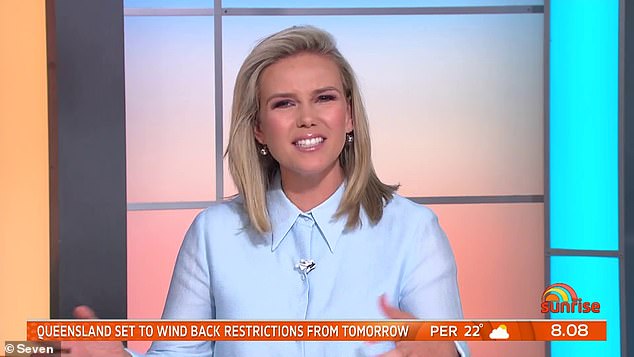 Having her say: Bartholomew had criticised Ms Markle on air on Wednesday, after sources close to the American-born duchess said she wasn’t attending Prince Philip’s funeral because she didn’t want to make the sombre occasion all about her 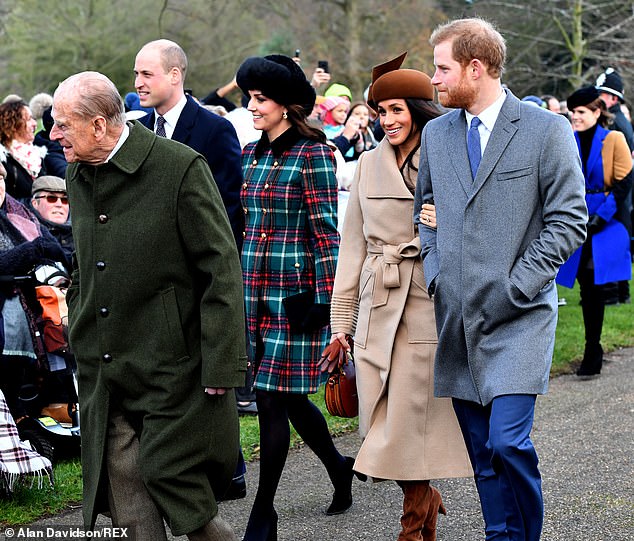 Explanation: In addition to not wanting the spotlight, a Buckingham Palace spokesperson previously confirmed Meghan ‘has been advised by her physician not to travel’ because she is six months pregnant. Pictured: the Duke and Duchess of Sussex walk behind Prince Philip at Sandringham on December 25, 2017. The Duke of Edinburgh died on Friday, at the age of 99

The Sunrise presenter made the comments after the breakfast show aired a story about Ms Markle, ahead of Saturday’s funeral at Windsor Castle.

Co-host David Koch then jumped in and compared Ms Markle to Yoko Ono, whose marriage to John Lennon was often cited as a cause of the break-up of The Beatles.

‘She’s the Yoko Ono of the Royal Family,’ he said.

Bartholomew agreed Ms Markle would have been criticised no matter what she decided to do for the funeral as it would have been her first visit since the bombshell interview with Oprah Winfrey in which she repeatedly criticised the Royal family.

‘She’s right, if she had gone, there would have been a lot of tension on her and it would have distracted,’ she said.

‘But for them to say that out loud [about Meghan not wanting to be the centre of attention]… just go with the Palace line wouldn’t you? Just for once. Just shut up.’

Bartholomew concluded that Ms Markle and Prince Harry should have just said her decision to stay in the U.S. was based entirely on doctors’ orders. 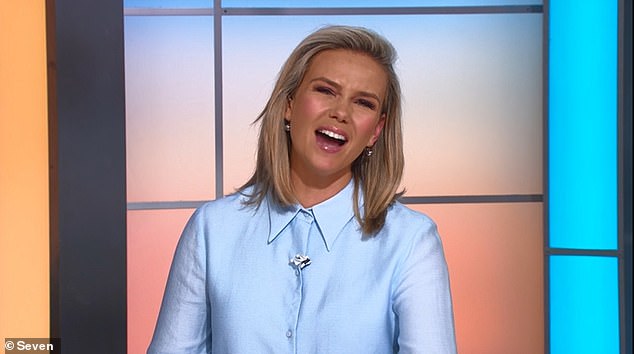 Commentary: Bartholomew concluded that Ms Markle and Prince Harry should have just pretended her choice to stay in the U.S. was purely based off doctors orders

Ms Markle has also said she is ‘ready to forgive’ the Royal Family despite telling Oprah they were racist towards Archie and ignored her mental health problems, a friend exclusively told DailyMail.com.

‘Meghan said her main concern right now is supporting Harry. She said she left it up to him as to whether or not she would attend the funeral,’ an insider with close ties to Meghan Markle tells DailyMail.com.

‘Meghan said it’s during these times when family should come together, put their differences aside and unite as one. She said this is what Prince Philip would want and that she’s willing to forgive and move forward.’

While there was still time for Meghan to fly to the UK to join Harry before Saturday’s funeral, the insider added that her mother Doria is ‘adamant’ that she not travel while pregnant.

‘Doria insisted that Meghan stay behind and support Harry from afar. Like Harry, Doria is very protective of Meghan and doesn’t want to see her putting her own health at risk. Stress is the last thing Meghan needs right now.’ 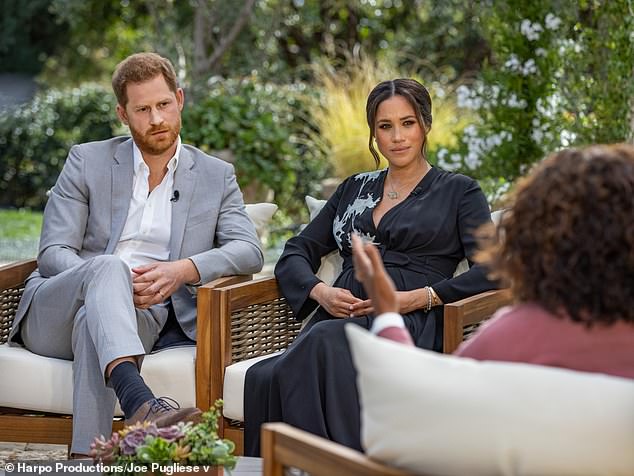 Revelations: Prince Harry and Meghan Markle are pictured during their bombshell interview with Oprah Winfrey

The Sussexes are expecting their second child – a girl – this summer.

‘Meghan said attending or not attending Prince Philip’s funeral isn’t going to change her relationship with the Queen. She said the Queen understands her absence and would want her to stay safe and healthy for the baby,’ the friend said.

‘Meghan said this is the opportune time for Henry to mend his relationship with his brother and his dad. She doesn’t need to be there for that.’

Prince Harry flew into London’s Heathrow Airport without his wife over the weekend on his first visit to Britain since quitting royal duties.

Harry’s return to the UK ahead of Saturday’s funeral is his first since March 2020 when he moved to Canada, and will be the first opportunity to reunite with Prince William and his father Prince Charles, who is said to be ‘looking forward’ to a get-together with his son.

Harry gave a light-hearted tribute to the Duke of Edinburgh on Monday after his death at the age of 99 and declared: ‘He was my grandpa: master of the barbecue, legend of banter, and cheeky right ’til the end.’

Harry said: ‘He has been a rock for Her Majesty The Queen with unparalleled devotion, by her side for 73 years of marriage, and while I could go on, I know that right now he would say to all of us, beer in hand, ”Oh do get on with it!”.’

The Royal Family’s Twitter page shared a picture with the Queen and Prince Philip along with a moving quote from the monarch about her husband from a speech she made celebrating their golden wedding anniversary in 1997.

In the speech, looking back at their then 50 year marriage, she said: ‘He has, quite simply, been my strength and stay all these years, and I, and his whole family, and this and many other countries, owe him a debt greater than he would ever claim, or we shall ever know.’

The Duke of Edinburgh died peacefully at Windsor Castle on Friday, aged 99. 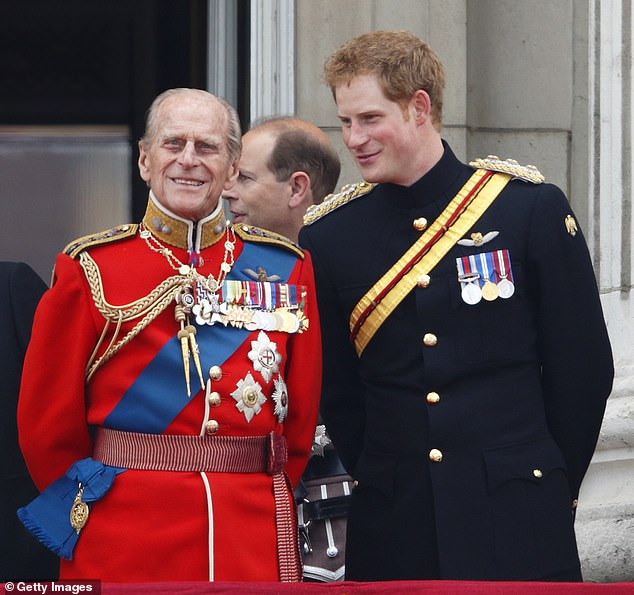 Rest in peace: Prince Philip died on Friday. The Royal Family had said in a statement, ‘It is with deep sorrow that Her Majesty The Queen announces the death of her beloved husband, His Royal Highness The Prince Philip, Duke of Edinburgh’. Pictured with Prince Harry in 2014

The Sussexes, who ignored calls to postpone the March 7 CBS interview with Oprah because Philip was unwell, accused an unnamed royal, not the Queen nor the Duke, of raising concerns about how dark their son Archie’s skin tone would be before he was born.

Ms Markle claimed that she’d been trapped by the ‘institution’ of the Royal Family and was at one point suicidal, but that when she sought help, was told she could not have it.

The Queen said after the interview that the allegations were ‘concerning’ and the matter was a family one that would be dealt with privately.