Sunrise star David ‘Kochie’ Koch has revealed what lies beneath the studio desks on the Channel Seven breakfast show.

On Tuesday, David, who co-hosts the show with Natalie Barr, shared some behind-the-scenes photos showing large white heaters under the desk.

David explained that Nat had stolen his heater for herself on the show, joking it is a first-world problem and he was calling ‘HR’ at Seven.

Mystery solved: Sunrise’s David ‘Kochie’ Koch, 65, (pictured) showed-off his sense of humour as he revealed what is REALLY under the studio desk of the breakfast show. (L) Nat Barr

Elsewhere, David was visibly unimpressed when his colleague Mark Beretta draped a Geelong AFL scarf around his shoulders.

David is the chairman of Port Adelaide, who Geelong are set to face in the first week of the finals this Friday.

‘Why are colleagues so mean,’ mused the comically annoyed 65-year-old TV host in his Instagram Stories.

‘Not happy Jan,’ he wrote, adding a picture of himself throwing off the scarf.

Meanwhile, David and Natalie recently rolled up their sleeves to receive the second dose of their AstraZeneca vaccine.

The TV stars documented getting the jabs earlier this month after receiving their first doses in May. 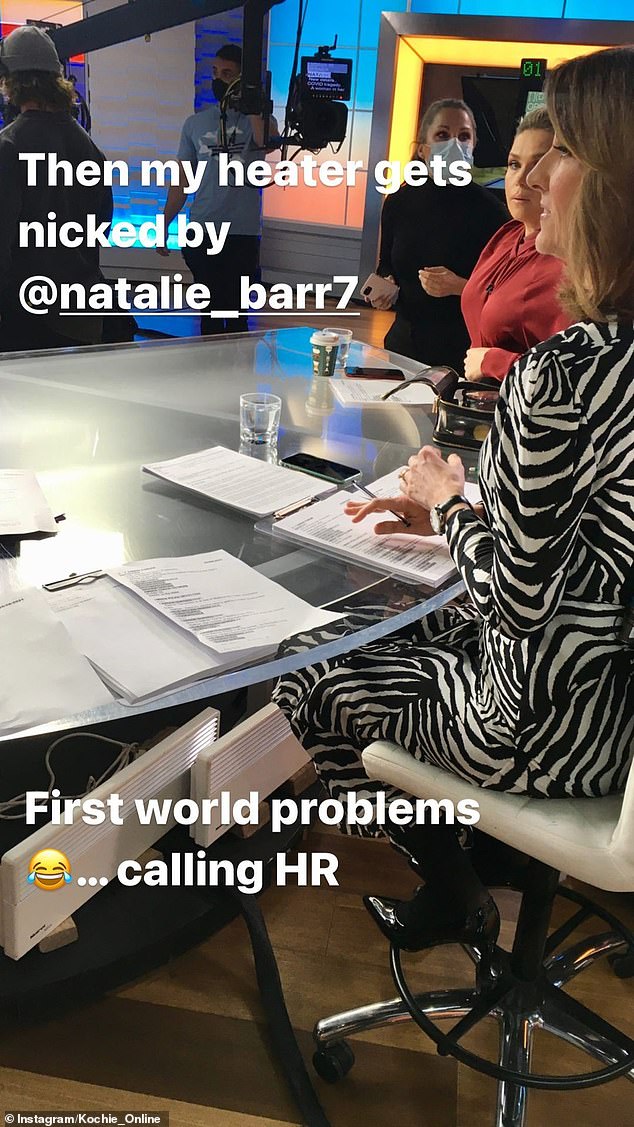 Very hot: David, who co-hosts the show with Natalie Barr, showed some behind-the-scenes photos with large white heaters under the desk 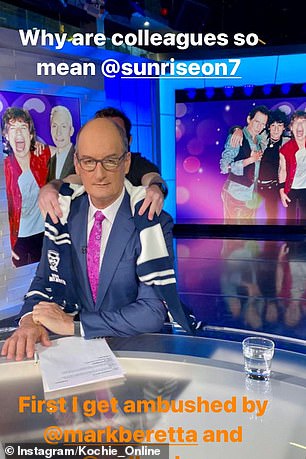 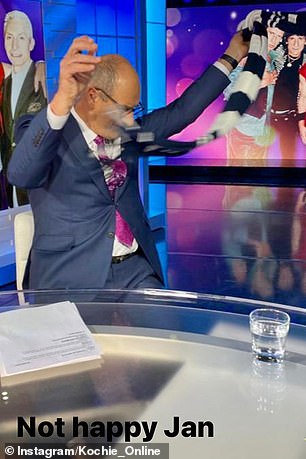 Ambushed: Elsewhere, David joked about co-star Mark Beretta putting a sports scarf over his shoulders which he didn’t like and threw off writing: ‘Not happy Jan’

David, 65, and Natalie, 53, explained their appointment for the second jab was brought forward due to recently updated medical advice from NSW Health.

‘With the growing Covid emergency in Sydney, anyone who received the AstraZeneca jab should now get their second shot in four to eight weeks,’ Kochie explained. 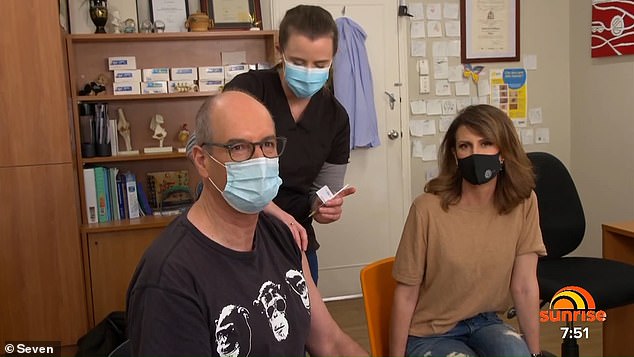 Doing their bit: Sunrise hosts David and Natalie have rolled up their sleeves to receive their second AstraZeneca vaccines

The two TV hosts visited NSW AMA President Dr Danielle McMullen, who said that because the presenters were completely ‘fine’ after having their first dose, they were fit to have their second.

After being fully vaccinated, Dr McMullen told the TV hosts that their chances of side effects or risk of blood clots was minimal and ‘ten times less’ than when they had their first jab. 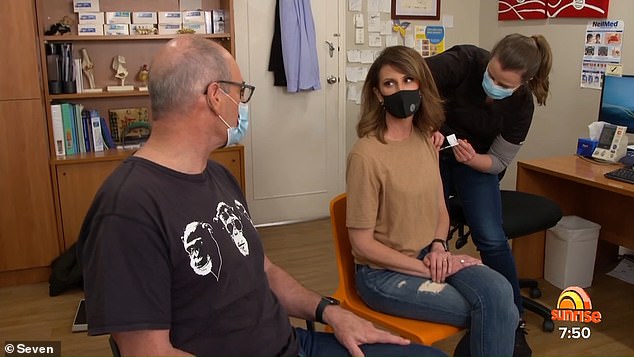 Dose: The two TV hosts visited NSW AMA President Dr Danielle McMullen, who said that because the presenters were completely ‘fine’ after having their first dose, they were fit to have their second

The coronavirus vaccine is a vital measure being taken to protect the community from the spread of the virus.

Covid-19 can cause serious illness, ongoing health problems and even death.

The Pfizer vaccine is in short supply in Australia and it is not yet available to people under 40. But will be soon.

Instead, younger Australians can get the abundant AstraZeneca vaccine via their GPs because the government is prioritising Pfizer jabs for people aged 40 to 60. 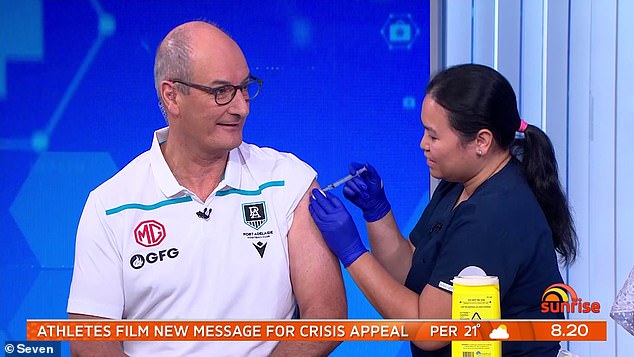 Vaxxed: The TV stars documented getting the jabs after receiving their first doses in May (Kochie is seen getting his first jab live on-air in May)