A Super Bowl field invader in a hot pink one-piece managed to run from the stands all the way to the end-zone during the fourth quarter of Sunday’s Super Bowl – but doesn’t appear brave enough to streak naked in front of fans.

The streaker, one of only 22,000 fans in attendance, was somehow able to get onto the field in the fourth quarter – temporarily stopping play and sparking endless jokes about the Kansas City Chiefs abysmal performance against the Tampa Bay Buccaneers.

The man, who has not yet been identified, wore a tiny pink Vitaly Uncensored swimsuit, referring to a pornographic website founded by YouTuber Vitaly Zdorovetskiy.

The man initially made it midfield before blitzing toward the Buccaneers’ end zone as he was chased hilariously by two security guards, pulling a spin move to avoid them.

He was eventually taken to the ground, put into handcuffs and escorted off the field. 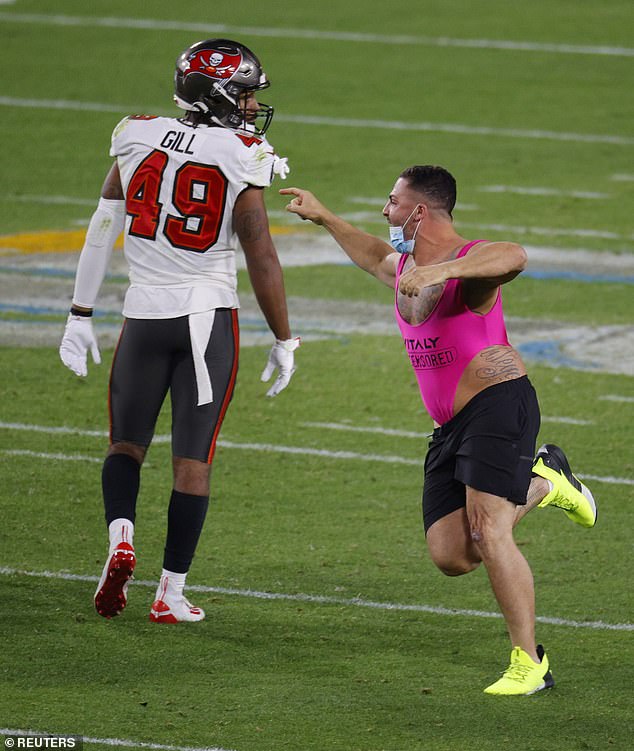 The streaker, who has not yet been identified, is seen with  Buccaneers’ Cam Gill 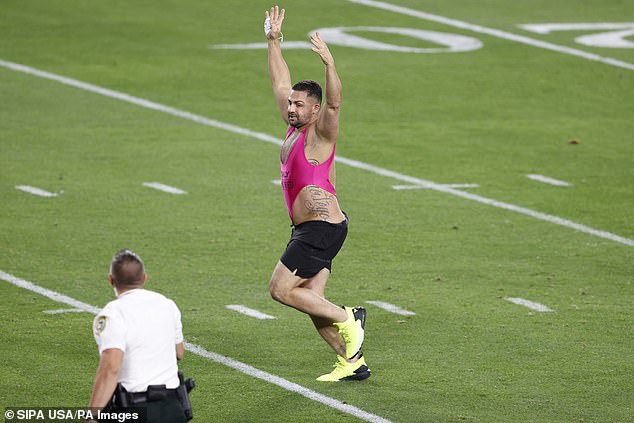 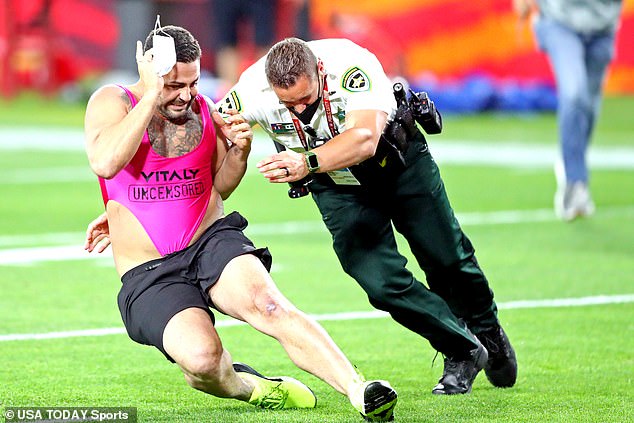 The streaker, who remained mostly clothed, was seen running without his mask on the field 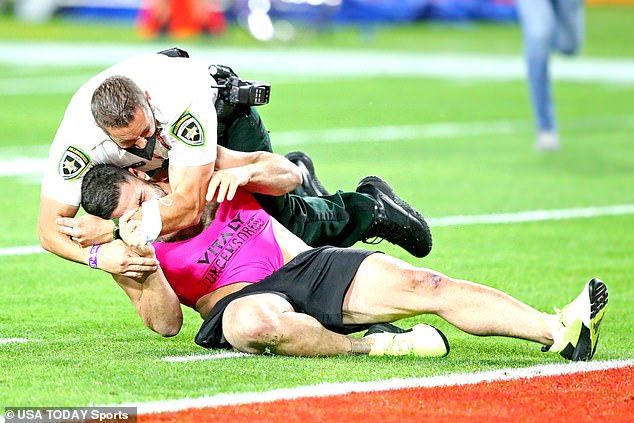 It is not the first time  Vitaly has been involved in a streaking stunt.

At the 2020 Super Bowl, Instagram model Kelly Kay Green, 27, tried to run across the field as the Kansas City Chiefs took on the San Francisco 49ers at Miami’s Hard Rock Stadium.

And in June 2019, Russian-American swimsuit model Kinsey Wolanski, 23, made global headlines after streaking in a skimpy swimsuit during the European Champions League soccer final in Madrid.

The website claimed the latest prank on Sunday, noting ‘We finally streaked it,’ referring to Super Bowl LV.

‘Jim, is that you?’ joked CBS commentator Tony Romo to his partner, Jim Nantz.

Commentator Kevin Harlan of Westwood One Sports called the ‘play’ which was mostly cut out of broadcasts.

‘He’s running the middle, he’s at the 40. Arms in the air in a victory salute,’ Harlan narrated.

‘He’s pulling down his pants, pull up your pants my man! Pull up those pants! He’s being chased to the 30.’

Fans were took to Twitter to comment about the streaker, noting it was the most exciting thing in the blowout game.

‘Yeah I get the networks don’t want to reward these idiots with airtime but this game was over early and could have benefited from showing this,’ wrote @mb14152. 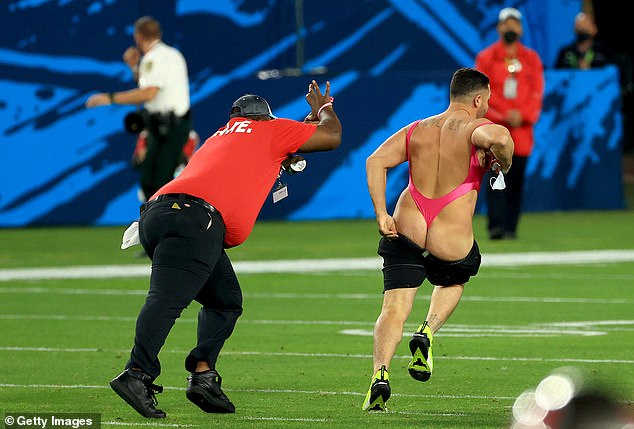 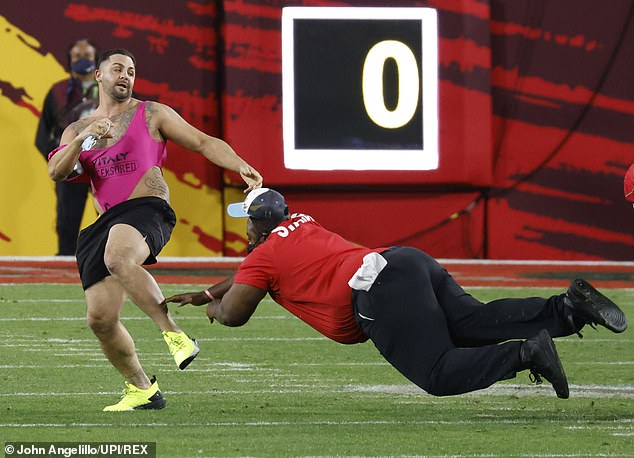 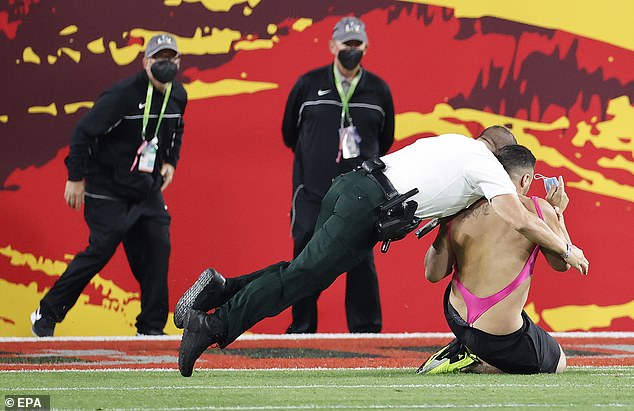 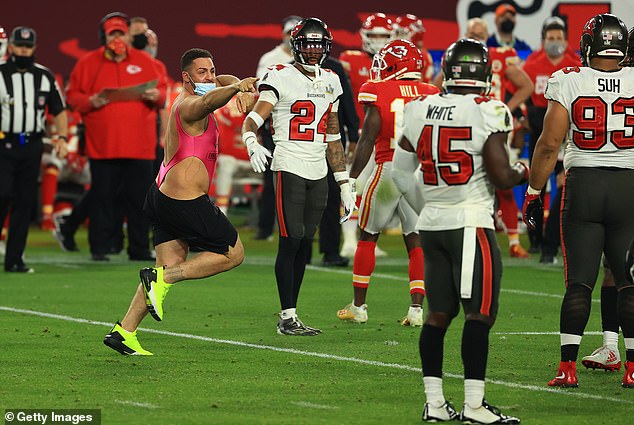 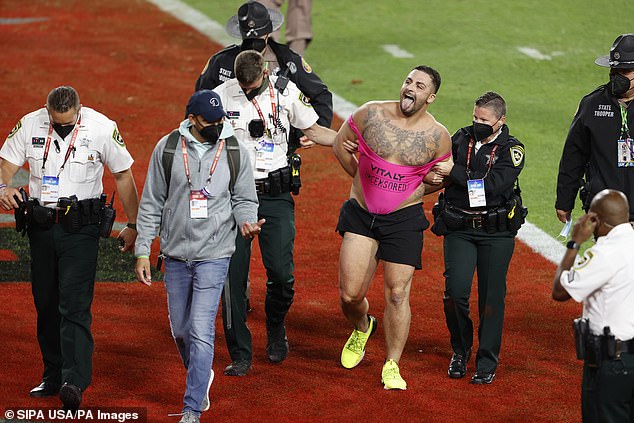 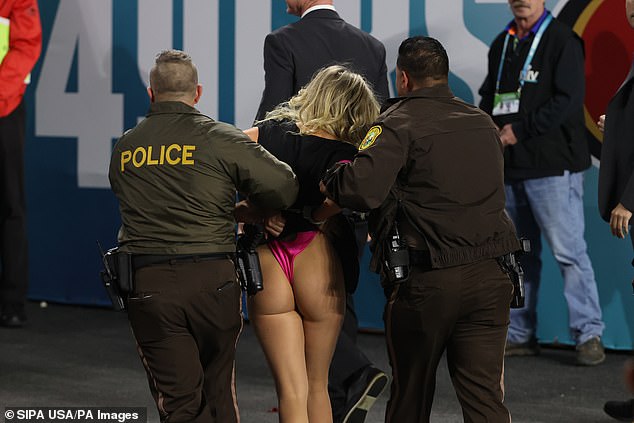 During last year’s Super Bowl, a security team tackled Instagram model Kelly Kay to the floor before escorting her out

‘That streaker just racked up more yards than the Chiefs offense has all night,’ quipped @MaxStickney.

Another joked: ‘THE STREAKER MADE IT TO THE END ZONE BEFORE THE CHIEFS.’

Other Twitter users used the opportunity to poke fun at the Sunshine State, noting that the streaker is ‘PEAK PANDEMIC FLORIDA.’

Others called the stunt ‘sad’ and mocked Vitaly Uncensored for the display.

‘So #vitalyuncensored really tried to be relevant again by streaking during the #superbowl how sad. Smiling face with open mouth and cold sweat,’ wrote @RobbyDG98.