By Alex Raskin Sports News Editor For Dailymail.com and Reuters

The Kansas City Chiefs have rewarded quarterback Patrick Mahomes for his MVP performance in Super Bowl LIV by signing him to a 10-year contract extension that is believed to be the largest contract in NFL history.

ESPN’s Adam Schefter reported the historic deal on Twitter, writing that it is expected to be ‘the richest contract in NFL history.’

Terms of the deal were not disclosed. Neither the team nor Mahomes’s agents immediately responded to the Daily Mail’s request for confirmation.

‘There are no official numbers on Patrick Mahomes’ 10-year extension just yet, but multiple sources believe it ultimately will be tied to a percentage of the salary cap for each season,’ Schefter explained on Twitter. ‘The higher the cap goes, the more Mahomes will make.’

The 24-year-old is entering the final year of his rookie deal with a fifth-year option – at $24.87 million – available for 2021. The Chiefs are adding 10 years to his contract for a total of 12 seasons remaining in Kansas City.

Mahomes was the NFL Most Valuable Player in 2018 and guided the Chiefs to the team’s first Super Bowl title in 50 years last season.

The Chiefs return 20 of their 22 Super Bowl starters in 2020, and are expected to compete for a Super Bowl once again.

The son of former New York Mets relief pitcher Pat Mahomes, Patrick was a star player in high school and was actually drafted by the Detroit Tigers in the 37th round of the 2016 MLB Draft.

Mahomes decided to continue playing football at Texas Tech and actually tied an NCAA record with 734 passing yards in a single game.

After being drafted 10th overall at the 2017 NFL Draft, Mahomes spent a year backing up Alex Smith before moving into the starter’s role in 2018. In his first full season as the Chiefs’ signal caller, Mahomes tossed a league-high 50 touchdowns while throwing only 12 interceptions as he went on to win MVP honors and lead Kansas City to the AFC title game.

Mahomes is unmarried, but he and longtime girlfriend Brittany Matthews have reportedly been together since high school. The couple bought a $1.92 million home together in 2018, according to BizJournals.com. 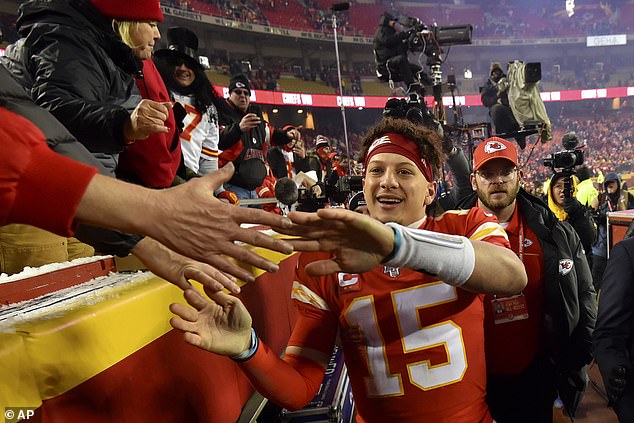