The first super-complaint is set to be made against the ‘potentially unlawful’ police practice of sharing data on crime victims with Home Office immigration officials.

Human rights campaign groups Liberty and Southall Black Sisters said in a joint statement that victims and witnesses of crime who report information to the police are frequently referred to the Home Office if there are questions over their immigration status.

This deters those with uncertainty over their right to remain in the country from speaking to police and allows criminals to ‘weaponise their victim’s immigration status, as they can be coerced into not reporting’, the organisations said.

The first super-complaint is set to be made against the ‘potentially unlawful’ police practice of sharing data on crime victims with Home Office immigration officials. Stock photo

They added: ‘Criminals who are not reported are not investigated and thus free to commit crimes against other members of the public.’

The super-complaint system, which covers all police forces in England and Wales and was launched in November, allows organisations to raise concerns on behalf of the public and confront systemic issues.

The complaint will now be reviewed by Her Majesty’s Inspectorate of Constabulary and Fire and Rescue Services (HMICFRS), the Independent Office for Police Conduct (IOPC) and the College of Policing.

Liberty solicitor Debaleena Dasgupta said: ‘Data sharing undermines the police response to crime, which endangers us all by allowing criminals to act with near impunity.

‘The only acceptable solution is the formal creation of a firewall – a cast-iron promise that personal information collected about victims and witnesses by public services like the police will not be shared with the Home Office for immigration enforcement purposes.’ 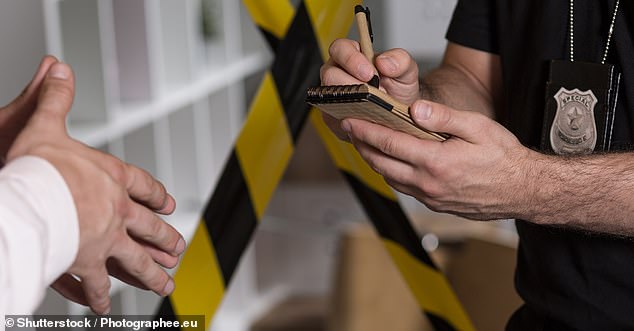 Campaign groups say victims and witnesses of crime who report information to the police are frequently referred to the Home Office if there are questions over their immigration status. Stock photo

A Home Office spokeswoman said: ‘Our immediate priority is always the welfare of the individual and to ensure that all vulnerable migrants receive the support and assistance they need regardless of their immigration status.

‘Victims of crime must be treated first and foremost as victims.

‘When individuals are found to have no basis in the UK, we carefully consider the details of the case before taking any enforcement action.’

But the groups do not believe this goes far enough and said in a joint statement that they will lodge the formal super-complaint on Monday.

Vulnerable women are put at risk by the referral practice, according to Southall Black Sisters’ Pragna Patel.

She said: ‘We have seen the police repeatedly prioritise immigration enforcement, ahead of the wellbeing of some of the most vulnerable women who report domestic and sexual violence.

‘Immigration enforcement is being conflated with safeguarding issues but let us be clear about this – reporting and detaining women or men as a safeguarding measure is nothing of the sort – it is a violation of their civil and human rights.’