A super organised mother has divided the internet after revealing her simple money-saving trick for her family trip away.

The thrifty mother, from New South Wales, said she wanted to surprise her three young sons with a mini weekend getaway so she decided to pre-package all their snacks to help her save time and money.

‘We are surprising our boys with a weekend away so today I organised a bag each for each day we are away,’ she wrote in a Facebook group.

‘I love that I won’t have to worry about packing food each morning or buying snacks every two minutes (my boys eat a lot).’

A super organised mother has revealed her simple money-saving trick for her family trip away. She decided to pre-package all their snacks to help her save time and money

Besides what’s pictured in the snaps, the mother said she will also back an array of fruits and yoghurt, which is ‘enough snacks for the whole day’.

‘It’s going to make my weekend so much easier and cheaper,’ she said.

The mother also praised a fellow parent for sharing the idea on social media earlier this week after she was looking for ideas on how to save money on her family trip.

Dozens of mothers said it’s a ‘great idea’, with many saying they do the same thing for their children when they go away on holiday.

‘Yep this is what I always do, even did it for our trip overseas as I didn’t know if the kids would eat foreign food and they always need snacks when out and about,’ one mother said.

However, some weren’t on board with the idea, saying the mother should ‘enjoy’ her family trip, while others suggested the the sandwich bags were a ‘waste of plastic’.

‘Great idea. Even better if you could do it without all the extra plastic bags,’ one said. 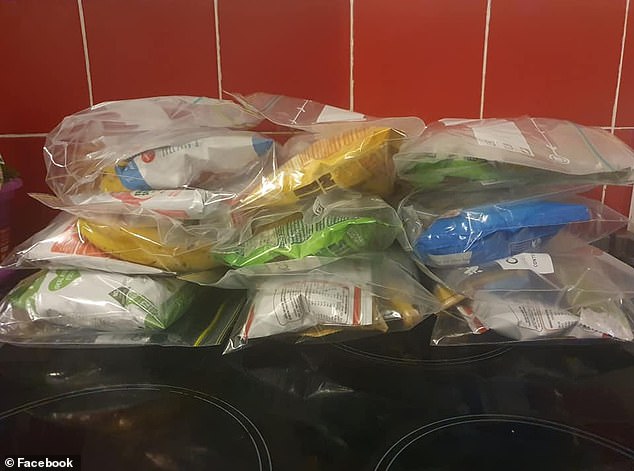 But many quickly pointed out the bags are easily reusable and recyclable.

‘These giant snap bags are totally reusable and I think they fit the bill, use it every day on a holiday. What a cool mum,’ one said, while another added: ‘I have children trained to make sure they bring their bag back and I use it again and again.’

Other mothers who have made pre-packaged snacks for their kids shared humourous stories.

‘I used to do this then find five bags under their beds on a weekend. God I love them,’ one wrote.

And a second woman said as she laughed: ‘I love the idea and I’ve tried it myself but my kids eat everything in their lunchbox/snack bag within like an hour.

‘It doesn’t matter how much I pack, they are “starving” because they know I’ve got the snack packs/lunchboxes with food. They don’t rest until they have eaten it all and then whinge when there’s nothing left and they are hungry.’