India has today began evacuating thousands of villagers and halted port operations ahead of a cyclone expected to hit its east coast this week, piling pressure on emergency services grappling with the coronavirus pandemic.

Cyclone Amphan is expected to make landfall on Wednesday near the Ganges RiverDelta, with winds as high as 150mph and the strength of a category 4 hurricane potentially causing devastation.

Low-lying delta in West Bengal state, which is densely populated and poverty stricken in parts could suffer storm surges of up to 30ft if the cyclone touches down there, causing havoc on already stretched public infrastructure.

Cyclone Amphan is expected to make landfall on Wednesday near the Ganges River Delta, with winds as high as 150mph

The cyclone comes as India eases the world’s longest lockdown, imposed in April against the virus, which has infected more than 96,169 people and killed 3,029.

The states of Odisha and West Bengal sent disaster management teams to move families from homes of mud and thatch to places of shelter from the severe cyclonic storm, Amphan, which is expected to gain strength in the next 12 hours.

‘We have to evacuate people from low-lying areas, and protect them from the coronavirus too,’ said a senior official of India’s home ministry who sought anonymity. 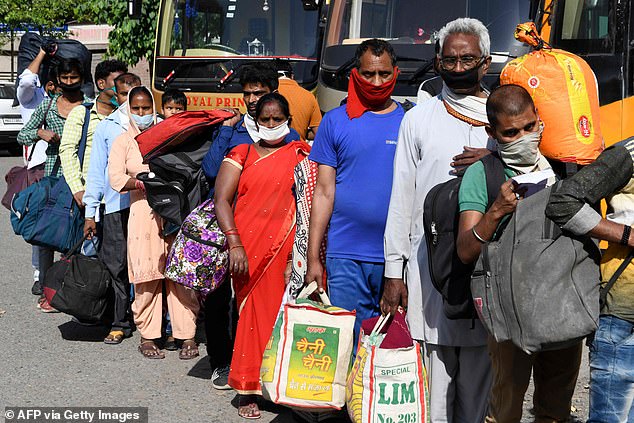 Stranded migrant workers and their families queue as they wait for a medical screening before going to a railway station and board on a special train to Raebareli in Uttar Pradesh state, from the Guru Nanak Auditorium, in Amritsar on May 18, 2020 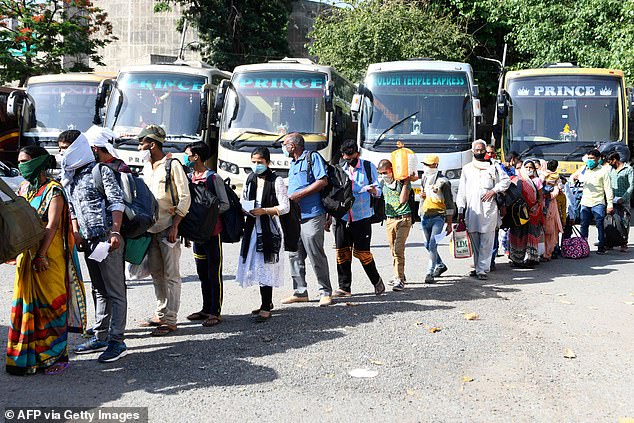 On top of the economic havoc caused due to covid-19 pandemic authorities are now having to deal with evacuating thousands of people in west Bengal. Pictured: Stranded migrant workers

The cyclone season usually runs from April to December, with severe storms forcing the evacuations of tens of thousands, causing widespread death and damage to crops and property, both in India and neighbouring Bangladesh.

Authorities at the port of Paradip in Odisha ordered ships to move out to sea to avoid damage as the cyclone formed over the Bay of Bengal was likely to intensify into a super cyclonic storm.

‘Operations have been wound down,’ said Rinkesh Roy, chairman of the Paradip Port Trust. ‘We are clearing the port.’ 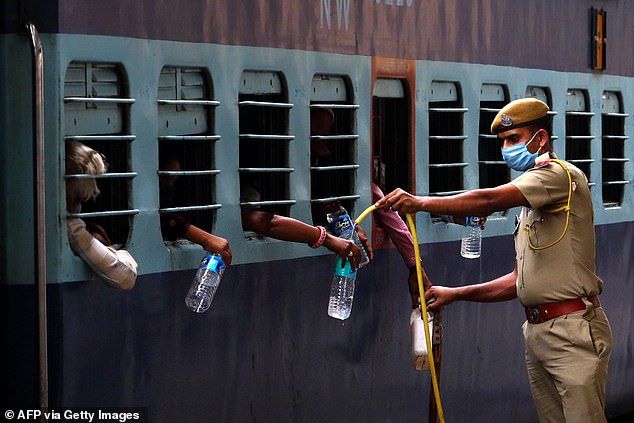 A policeman fills up bottles with drinking water to migrant workers of a special train service departing for Uttar Pradesh from Ajmer, May 18, 2020 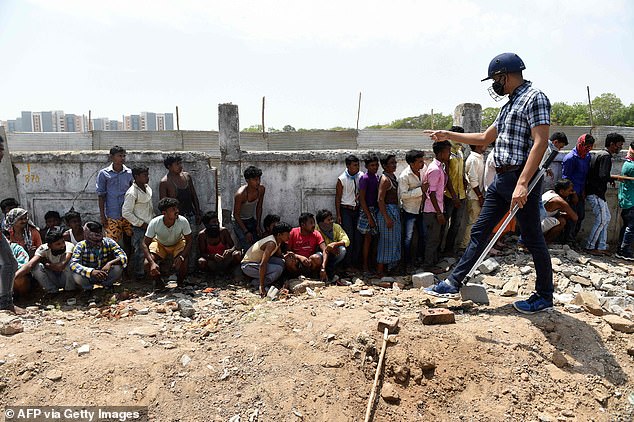 Gujarat police personnel detain migrant workers residing on a construction site after taking part in a stone pelting in Ahmedabad on May 18, 2020 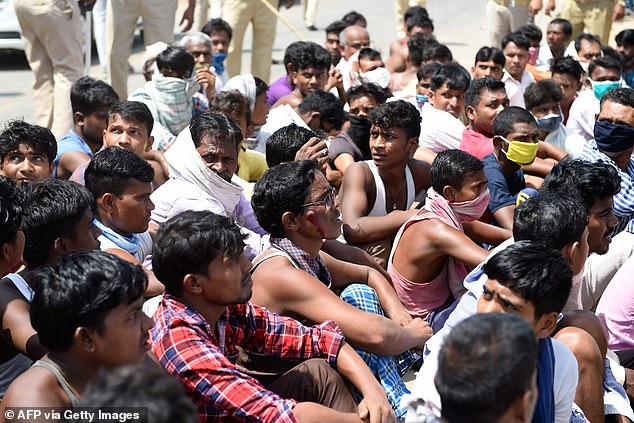 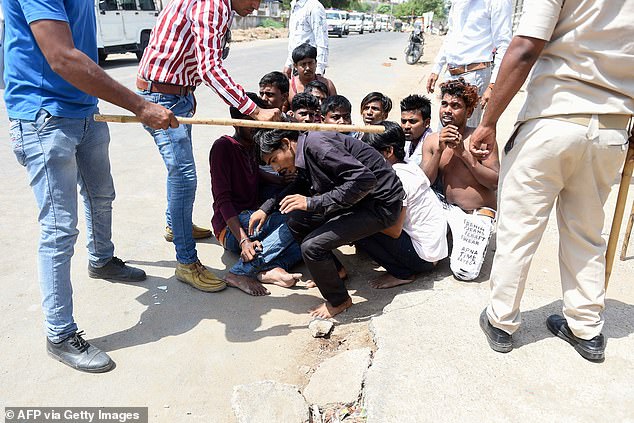 Prime Minister Narendra Modi is set to hold a meeting in New Delhi, the capital, to plan how to mitigate damage and injuries.

‘The extremely severe cyclonic storm ‘Amphan’…is likely to gain more strength and intensify further into a super cyclonic storm in the next 12 hours,’ weather officials said in a statement, forecasting heavy rain in eastern and southern areas.

India, with a coastline of 7,516 km (4,670 miles), gets hit by more than a tenth of all the world’s tropical cyclones, the bulk of them hitting its eastern coast around the Bay of Bengal.

India sees a record 5,242 new coronavirus cases as it extends lockdown until the end of May

India has extended its lockdown until the end of May after seeing a record jump of 5,242 cases in just 24 hours.

The lockdown of 1.3 billion people in India, which began on March 25 and is said to be the largest and strictest in the world, will continue for two more weeks.

India’s interior Ministry tweeted yesterday: ‘Lockdown measures to contain the spread of Covid-19 will continue for a period of up to (May 31)’.

The total number of covid-19 cases in India stands at 90,927 with 2,872 deaths, a third of those cases are in the western state of Maharashtra.

The lockdown has also been devastating for the economy with millions of migrant workers plunged into poverty after losing their jobs.

A curfew from 7pm to 7am prohibits all non-essential travel between those hours while schools, shops and public places remain closed.

Religious and political gatherings are prohibited, and domestic flights and trains are not running.