Jameela Jalil has used a speech at the Edinburgh TV Festival to criticise the BBC for broadcasting the N-word live on air.

The former T4 star who made it big in America said the corporation had ‘tremendous blind spots’ and acted with ‘reckless abandon’ when social affairs correspondent Fiona Lamdin repeated a racial slur which was used during a crime.

More than 18,000 people complained to the BBC over a news report which contained a racist term, according to figures from the broadcaster.

Frequently outspoken Jalil, who is known for her ‘woke’ opinions, also said she was happy to ‘rub people up the wrong way’ and recommended ‘very good therapy’ to help activists cope with the stresses of airing their opinions.

And she accused media outlets of trying to ‘terrify’ activists into silence by reporting on objections to what their opinions.

She said: ‘They want to terrify us about speaking out because, especially post-MeToo, we’ve seen the tremendous power of when women come together.’

‘If you are going to be someone who speaks out, you have to understand you’re going to rub people up the wrong way, people who are on the opposition, as well as people on your own side, because there is a weird amount of competition in activism, that I don’t understand.’

“And you have to protect yourself. I am someone who is incredibly lucky to have… a loving household that I live in with friends and a boyfriend, but also I have access to very good therapy.

She also said that “I’m a scary prospect for the patriarchy in this industry. I’m potentially inspiring other women to speak out’

On the BBC broadcast of the N-word, she said: ‘ ‘It has taken so long for us to get here to the point where we’re having this conversation and you know, we are still up until the last couple of weeks dealing with situations of such tremendous blind spots –  among members of the BBC for example and decisions they’ve made around words that they are using on mainstream television with reckless abandon, so there’s a lot to undo.’

‘There’s a lot to do but I definitely feel as though this conversation is starting to happen in a more meaningful way than ever before because the one thing we’ve never had was social media, and we never had a generation other than Gen Z before who mobilise and make their point so eloquently and powerfully before, so I think this is the beginning of true systemic change, I hope anyway.’

“Part of what makes me dangerous to oppressive systems is I have nothing to lose. I’m willing to walk away from this industry rather than compromise my integrity. I’ve shed that fear I had when I first came in.”

Speaking about her friendship with Afua Hirsch, she said: ‘It’s so funny that you bring up the way that the rhetoric has changed since George Floyd.

‘The way that you and I started to become internet friends… we were both called racists for calling out the racism that is rampant within our media. And that is because we were a culture that was more afraid of being called racist than racism itself, which now is a very normalised rhetoric. 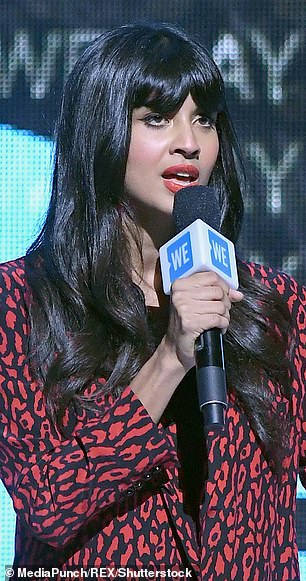 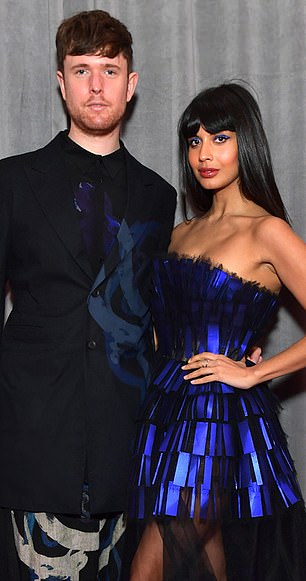 Jalil said: ‘Part of what makes me dangerous to oppressive systems is I have nothing to lose. I’m willing to walk away from this industry rather than compromise my integrity.’ She is pictured right with boyfriend James Blake

‘A year ago when you and I were sticking up for Meghan Markle, when other people weren’t, I’m very glad to see a lot of people start to back pedal and start to register that there is a serious problem here and that we’re not going to get away with it

She also called for greater representation of genders, ethnicities and disabilities in TV. She said: ‘I would love for our television industry, for our film industry to embrace south Asians for example, I don’t think we are diverse enough, I still think we are incredibly ableist, we do not have anywhere near enough disability representation.

‘We are improving over the last couple of years and it would be wrong for me to deny that, I’ve definitely seen a significant improvement, but really the problem is systemic.

‘As David was talking about, you know, there aren’t enough people on the inside. I don’t think I’ve ever had a black or brown director or producer in all of my years over in the UK… I think I had one executive producer who was a south Asian woman and she was fantastic and a massive part of why I was even able to start my career in television, because she rallied for me. Otherwise I may well have been replaced with another white person.

‘And so you know I think it’s really systemic on the inside where people are just casting people who look like themselves, or whose stories that they can relate to and therefore we’re denying ourselves so much colour and so many interesting and diverse stories, we’re denying ourselves the chance to learn about other groups and learn about each other and you know we have this unbelievably politically divisive moment and we have the opportunity within media to remedy that.’

‘To deny that art has a huge impact on the way that we feel about each other is so shortsighted, and so I do think that where we need immediate change is making sure that we are hiring people who are marginalised .

That doesn’t just mean racially diverse it also means diverse in sexuality and gender and it massively means in disability, because we’re just not showing a world on screen that reflects the world we walk around in, especially in somewhere as cosmopolitan as the UK.’