A 25-year-old man is fighting for his life in hospital today after a crash between two supercars in London last night which left a trail of destruction.

The vehicles – believed to be a Jaguar F Type and an Audi A5, were driving at speed through Chislehurst, south London, when the crash occurred, with four other vehicles smashed into.

It is understood one driver hit a lamppost while the other ploughed into a flower bed and then a metal bollard as it left the road.

Two supercars were involved in a crash in Chislehurst last night, pictured, that left a trail of destruction, with four other vehicles damaged 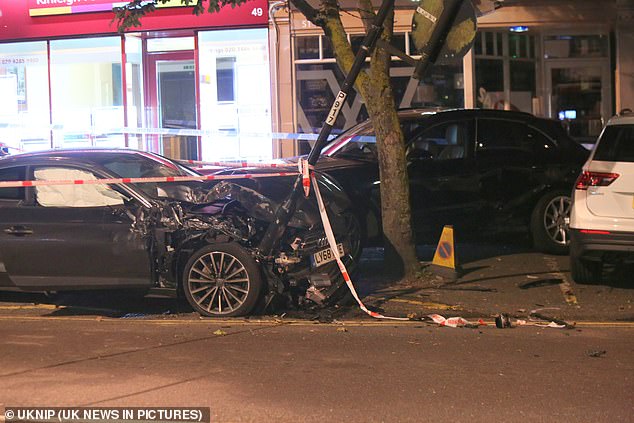 An Audi A5, pictured, was shown crashed into a lamppost in Chislehurst while a Jaguar F Type was the other vehicle involved

The other vehicles damaged were a Nissan Qashqi, a Volvo XC90, a two-day old Porsche Cayenne and a Volkswagen.

The Met Police is investigating and a spokeperson said: ‘Police were called at around 10pm to High Street, Chislehurst to reports of a collision between two vehicles.

‘The emergency services attended and a 25-year-old man was found seriously injured.

‘He was taken to a south London hospital in a critical condition.

‘A 25-year-old woman with minor injuries was also taken to hospital as a precaution.

‘The driver of the other car is speaking to officers. No arrests were made. Inquiries are ongoing.’