His wife and co-star revealed she is a survivor of domestic violence in a powerful video on Wednesday.

And on Friday, Chris Wood, 31, threw his support behind Melissa Benoist, 31, by posting a sweet Thanksgiving tweet dedicated to the woman he married earlier this year.

In it he used the #IStandWithMelissa hashtag many supporters have included in their own tweets.

Her man: Chris Wood, 31, threw his support behind Melissa Benoist, 31, by posting a sweet Thanksgiving tweet dedicated to the woman he married earlier this year

The rest of the Jay and Silent Bob Reboot actor’s post read: ‘Happy Thanksgiving! I’m going to kiss my wife and hold her tenderly. All day. And every day. How do YOU show love?’

The Supergirl star spoke candidly about her experiences in an emotional 14-minute video that she shared to Instagram on Wednesday.

The Whiplash actress bravely discussed her harrowing tale in a bid to ’empower others to seek help and extricate themselves from abusive relationships’. 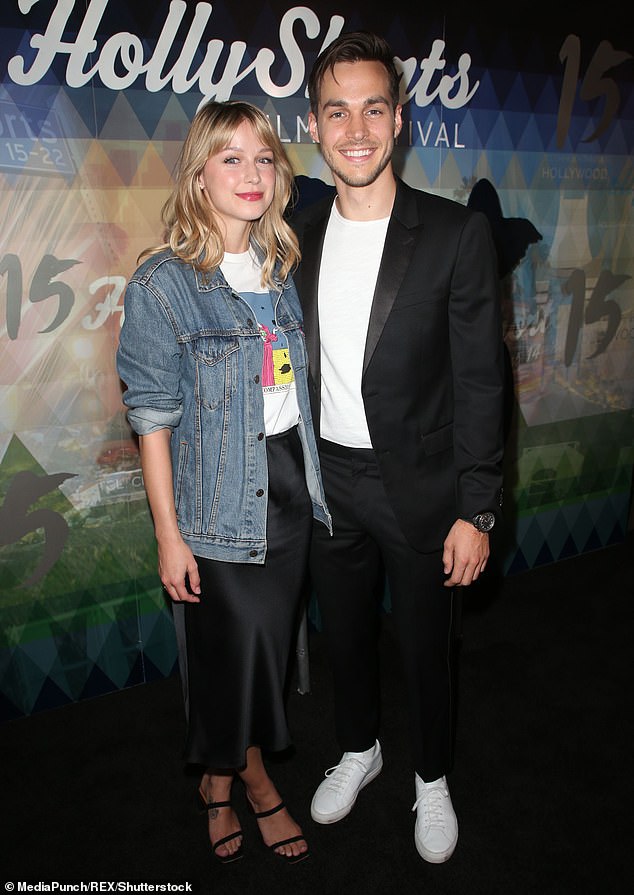 Found love: Melissa is now married to her Supergirl co-star Chris Wood. The couple tied the knot in September this year. Seen in August 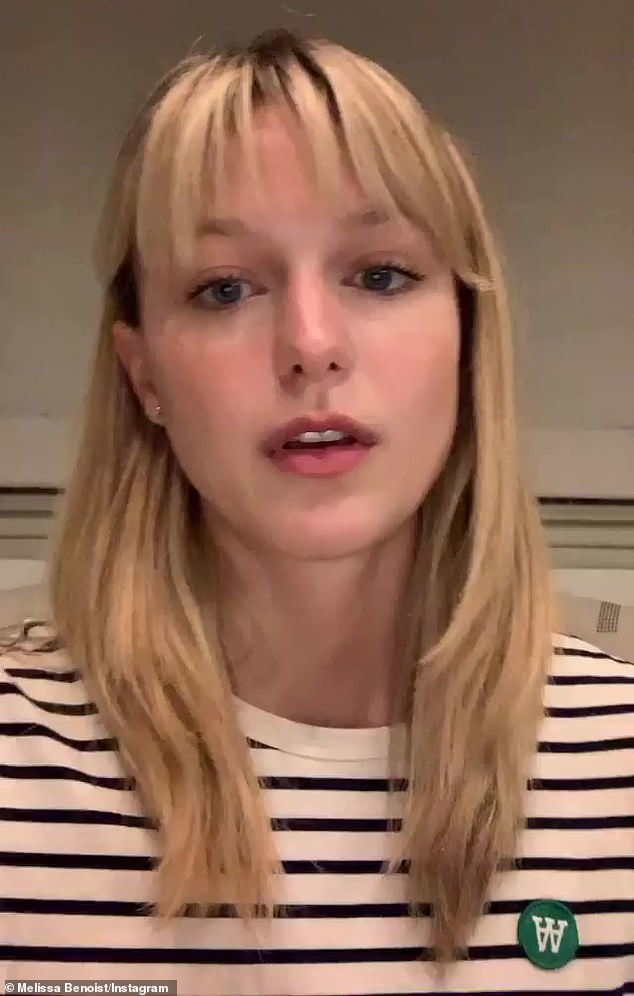 Candid: Melissa Benoist has revealed that she is a survivor of domestic violence. The Supergirl star spoke about her experiences in a 14-minute Instagram video on Wednesday

In the video, she revealed that a former partner – whom she did not name – abused her both physically and emotionally for the duration of their relationship.

She explained: ‘So I don’t normally do things like this but I’ve written something that I want to share, and I wanted it to stay my words and not have to edit it down for publishing. I’m gonna read it out loud, and I’m quite nervous so bear with me.

‘I am a survivor of domestic violence or IPV (intimate partner violence), which is something I never in my life expected I would say, let alone be broadcasting into the ether.

‘He was a magnanimous person, who didn’t really give you a choice not to be drawn to him. He could be charming, funny, manipulative, devious. He was younger than me, his maturity obvious. For a period of time, I wasn’t interested. I was newly single, gaining my bearing in a change in my life.’ 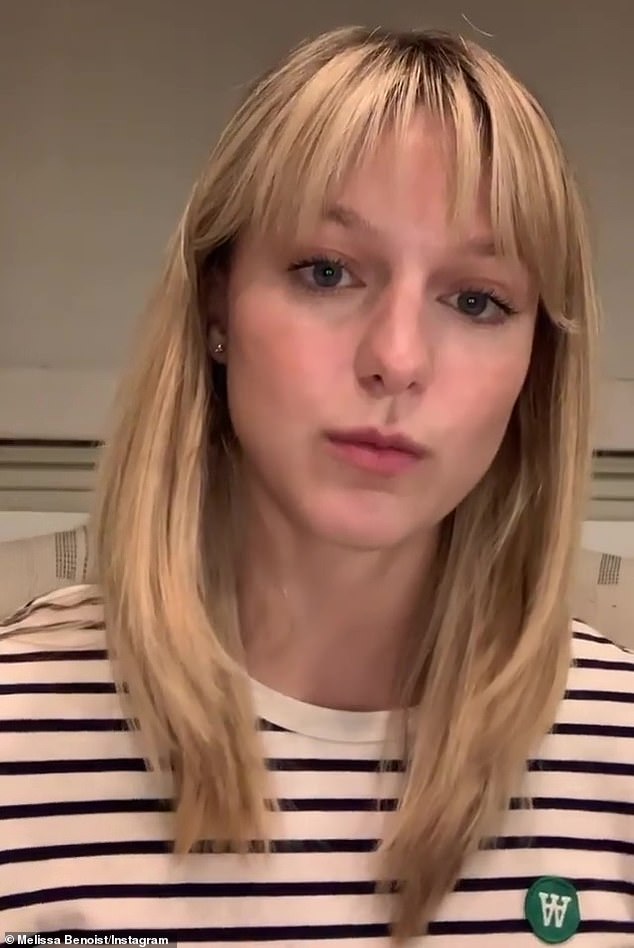 Brave: The 31-year-old actress bravely discussed her harrowing tale in a bid to ’empower others to seek help and extricate themselves from abusive relationships’

The actress went on to explain that whilst there was no violence early in their relationship, her alleged abuser would emotionally abuse her by ‘snooping’ on her devices and controlling her clothing choices.

She added: ‘None of that registered as abuse, because I was worried about how he felt at that point, to even comprehend how it even affected me. In retrospect, I see that each red flag followed a very clear path on things becoming violent.’

However, as time went by, Melissa claims her former partner did get physically abusive. 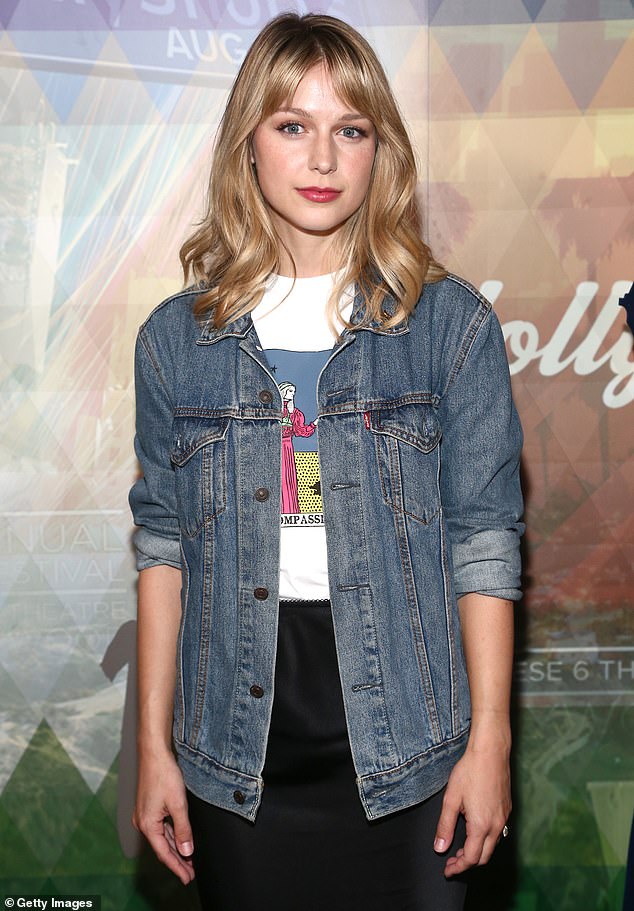 Candid: In the video, she revealed that a former partner – whom she did not name – abused her both physically and emotionally for the duration of their relationship (pictured in August)

She said: ‘The stark truth is I learned what it felt like to be pinned down and slapped repeatedly, punched so hard the wind was knocked out of me, dragged by my hair across pavement, head butted, pinched until my skin broke, shoved into a wall so hard the drywall broke, choked.

‘I learned to lock myself in rooms but quickly stopped because the door was inevitably broken down. I learned to not value any of my property – replaceable and irreplaceable. I learned not to value myself.’

The Glee alum said the final straw for her came when her alleged abuser hit her with his phone, and although leaving wasn’t easy, she’s proud of herself for managing to get out of her situation. 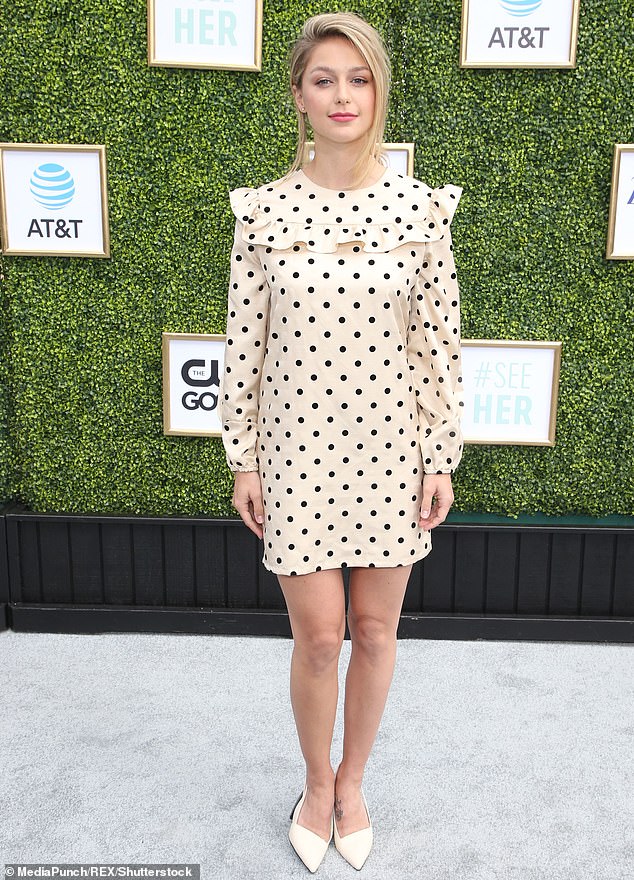 Snooping: The actress went on to explain that whilst there was no violence early in their relationship, her alleged abuser would emotionally abuse her by ‘snooping’ on her devices

She said: ‘It was a blow to my face with his iPhone. The impact tore my iris, nearly ruptured my eyeball, lacerated my skin and broke my nose. My left I swelled shut. I had a fat lip … Something inside of me broke, this was too far.

‘Leaving was not a walk in the park. It is not an event, it’s a process. I felt complicated feelings of guilt for leaving and for hurting someone I had protected for so long, and yes, mournful feeling of leaving something familiar.

‘But luckily, the people I let in, the more I was bolstered, I never lost the sense of clarity that kept telling me, “You do not deserve this.”

‘Breaking that cycle was the most rewarding, empowering choice I’ve ever made for myself. I feel an enduring strength. I will be healing from this for the rest of my life.’ 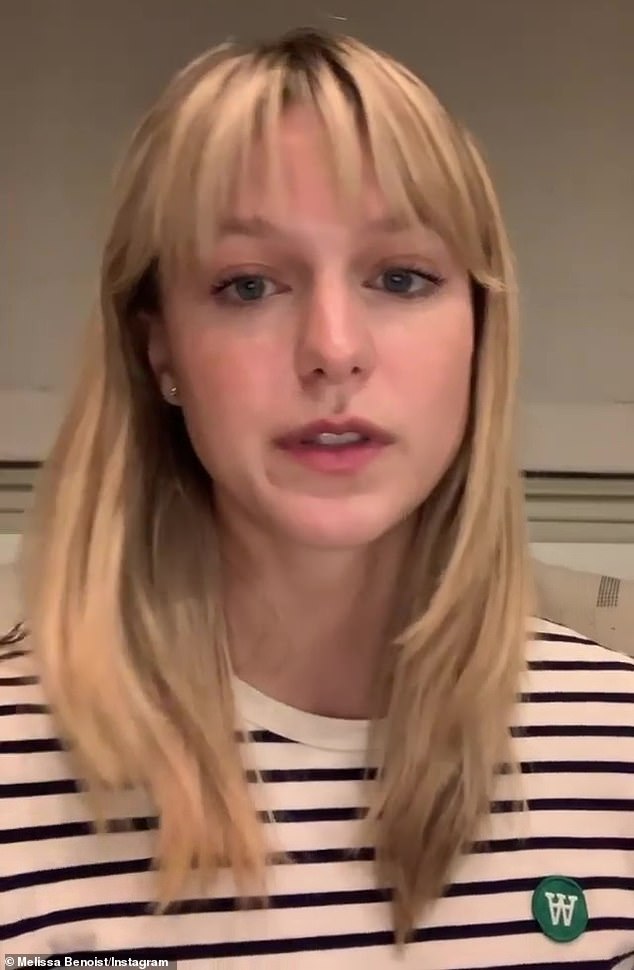 Horrifying: In 2015, her partner threw an iPhone at her face. It tore her iris and nearly ruptured her eyeball while also breaking her nose, but she lied about what happened to police and nurses

Melissa, who is currently married to her Supergirl co-star Chris Wood and was previously married to Glee star Blake Jenner, reached out to others who are struggling in abusive relationships, and said she hopes she can ’empower’ them to seek help.

She wrote: ‘The long and winding road of healing and reconciliation has brought me to this moment where I feel strong enough to talk about my experience openly, honestly and without shame.

‘By sharing my story, hopefully I can empower others to seek help and extricate themselves from abusive relationships. Everyone deserves to be loved void of violence, fear and physical harm.’ 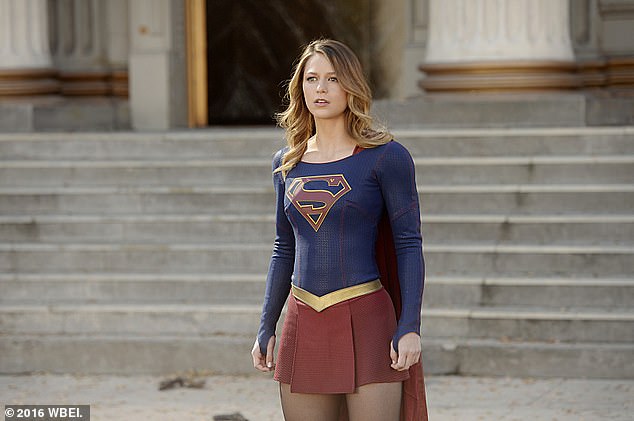 High flying: Benoist has played the title character on The CW’s Supergirl since 2015

During a 2016 appearance on The Tonight Show With Jimmy Fallon, Melissa described an eye injury similar to the iPhone attack, the Hollywood Reporter points out.

She claimed at the time to have fallen down a flight of stairs and hit her face on a potted plant, and said, ‘I looked like Squirt from Finding Nemo.’

In her new video, Benoist says her partner had told her the same thing after his attack.

She had also previously described herself as ‘accident-prone’ in interviews. 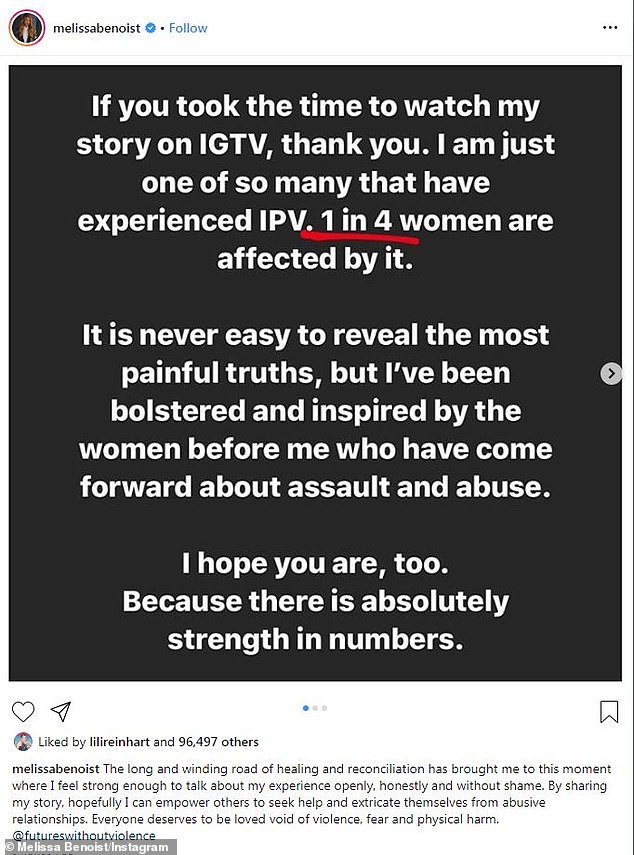 Important message: She thanked viewers for watching the video shortly after publishing it

After posting the video, Melissa shared a short text message on Instagram.

‘If you took the time to watch my story on IGTV, thank you. I am just one of the many that have experienced IPV. 1 in 4 women are affected by it.

‘It is never easy to reveal the most painful truths, but I’ve been bolstered and inspired by the women before me who have come forward about assault and abuse.

‘I hope you are, too. Because there is absolutely strength in numbers,’ she wrote. 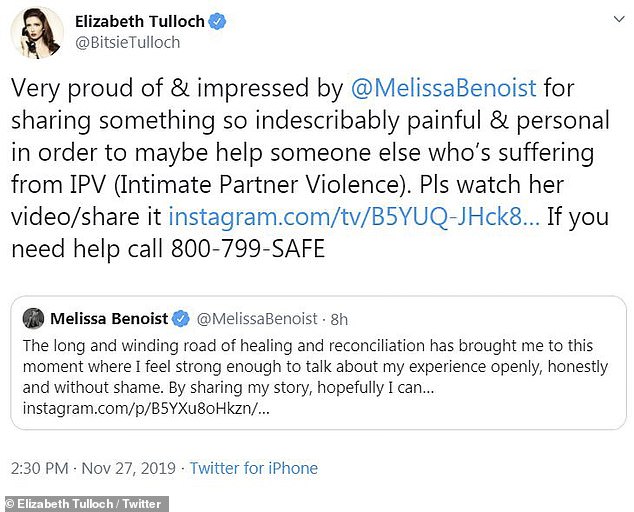 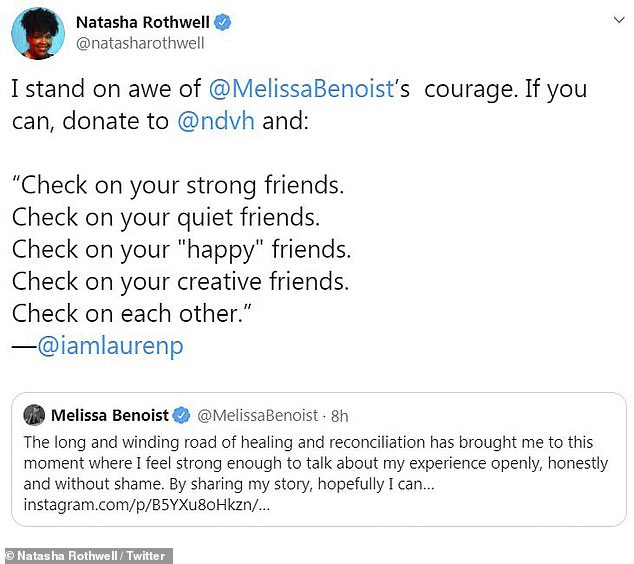 ‘Very proud’: Melissa’s revelation was met with praise on social media including from her Supergirl co-star Elizabeth ‘Bitsie’ Tulloch

‘Everyone deserves to be loved void of violence, fear and physical harm,’ she added in the caption.

Melissa’s revelation was met with praise on social media including from her Supergirl co-star Elizabeth ‘Bitsie’ Tulloch.

‘Very proud of & impressed by @MelissaBenoist for sharing something so indescribably painful & personal in order to maybe help someone else who’s suffering from IPV (Intimate Partner Violence).’

‘we see your strength’: Olympic gymnast Laurie Hernandez wrote: ‘melissa, i am so proud of you’

Olympic gymnast Laurie Hernandez wrote: ‘melissa, i am so proud of you. there is so much courage in sharing your story, and you chose to take your story and share it with the world. we see your strength. thank you for sharing’.

Rachel Zegler, who is starring in the upcoming Steven Spielberg movie of West Wide Story, wrote: ‘i adore you, melissa benoist. you are strong and beautiful and loved.’

For confidential help and support in the US please call the National Domestic Violence Hotline on 1-800-799-SAFE (7233).