Supermarkets should be punished if they don’t opt in to plastic bottle deposit scheme, experts backed by Dragons’ Den star Deborah Meaden warns

Supermarkets have been warned they will be demonised alongside tobacco and oil firms if they fail to back a deposit and return scheme for plastic drinks bottles and cans.

The Government and Environment Secretary Michael Gove have announced plans for a deposit and return scheme (DRS), which might add a refundable deposit of 15p.

However, there are concerns any implementation in England could be delayed until 2023 and ministers are at the centre of a fierce lobbying campaign by the plastics industry to limit it to small ‘on the go’ plastic bottles of 500ml or less.

Currently, only around four in ten of the estimated 35million plastic bottles and 20million aluminium cans used across the UK every day are collected and recycled. The rest are either buried in landfill, burned for energy or end up as litter. By contrast, recycling rates of more than nine in ten are achieved in other European countries with full deposit return schemes, such as Norway and Germany. MCS volunteers found 21,000 items of drinks-related litter – glass and plastic bottles, drinks caps and cans – during one weekend in September last year, on the Great British Beach Clean, which amounts to 42 items for every 100 metres of beach surveyed.

MCS chief executive Sandy Luk has written to the bosses of the ‘big ten’ supermarkets challenging them to back a fully comprehensive DRS scheme in their submissions to a Government consultation on the issue.

Her letter warns that some companies and manufacturers seem intent on thwarting the introduction of a comprehensive scheme.

She said: ‘It is highly regrettable that some elements in UK industry, with vested interests, seem intent on making up as many excuses as possible to resist a scheme which will remove and recycle the largest numbers of containers.

‘Lobbying behind the scenes must not be allowed to derail the most ambitious and comprehensive scheme from being introduced.’ She is calling on bosses at Sainsbury’s, Tesco, Aldi, Morrisons, Lidl, Co-op, Asda, Marks & Spencer, Waitrose and Iceland to condemn those who are lobbying against a comprehensive UK-wide DRS and argues that the tactics appear to be putting profits before the environment.

She said: ‘Supermarkets and other retailers do not want, in years to come, to be compared to the tobacco industry which spent millions trying to hide the dangers of cigarettes to our health; or the fossil fuel industry for its continued production of non-sustainable energy sources and advancing climate change.

‘Delaying the introduction of a comprehensive scheme will place a stranglehold on the environment, and effectively sentence much of our marine wildlife to an early death.’

The letter is at the heart of the #BottlesforChange campaign, which is backed by Miss Meaden, a MCS ‘ocean ambassador’. She said: ‘Over 20billion bottles and cans end up buried, burned or in the environment each year in the UK. This has to end.’

Scotland is leading the way on introducing a DRS. It is consulting on a scheme, covering all drinks containers, which could be rolled out as early as next year.

Litterwatch with Kate the mudlark

Kate Humble got down in the mud yesterday to help out on a riverside litter pick.

The TV nature presenter collected wet wipes and other discarded items by the Thames at Hammersmith Bridge. The clean-up, supported by charity Thames 21 and sponsored by Dettol, comes as this year’s Great British Spring Clean enters its final week. So far, an amazing 542,958 volunteers have signed up.

Miss Humble said: ‘I hope we help inspire genuine change and get the nation doing their bit.’ 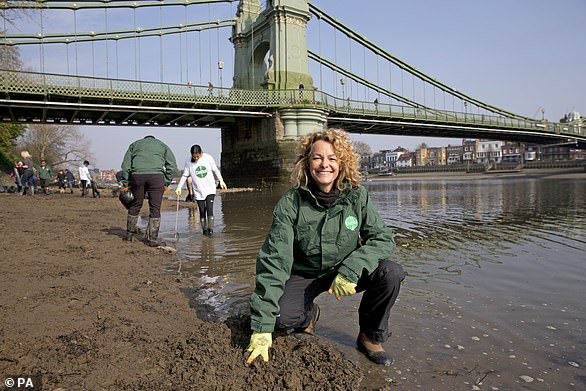