Asda has trimmed the cost of fuel at its 319 forecourts across the UK for the fourth time in as many weeks.

The supermarket chain – along with Tesco – has promised the cut 1p a litre off unleaded and 2p off diesel in response to falling wholesale prices for both fuels, with Morrisons and Sainsbury’s vowing to do the same from Saturday.

Just last week Asda was the first of the big four supermarket fuel retailers to slash 3p off the price of both fuels, sparking similar cuts by competitors.

Fourth fuel cut in four weeks: Asda has lopped another 1p off the price of petrol and 2p off a litre of diesel from Friday

Asda’s announcement to yet again reduce fuel prices means drivers will pay no more than 118.7p for a litre of unleaded and 129.7p for diesel at any of its fuel stations from Black Friday.

The reduction means diesel has fallen below £1.30 per litre for the first time in three months following 19 consecutive months of increasing prices.

According to the latest fuel price data, the supermarket will be offering substantial savings on the rest of the market from today (Friday 23 November).

The RAC’s Fuel Watch figures show the average cost of petrol across the country on Wednesday was 126.8p and diesel was 135.6p.

That means drivers are saving over 8p a litre on unleaded and 5p on diesel if they fill up at Asda today.

Based on an average-size family car with a 55-litre tank, that works out at a £4.40 saving if you brim your vehicle with petrol and £2.75 if you fill up with diesel.

The company’s senior fuel buyer, Dave Tyrer, said: ‘Further decreases in the wholesale market mean we are able to reduce our prices again, with Asda’s unleaded price dropped by up to 9p per litre since the end of October, and now we’re seeing the diesel price drop below £1.30 for the first time in three months.’ 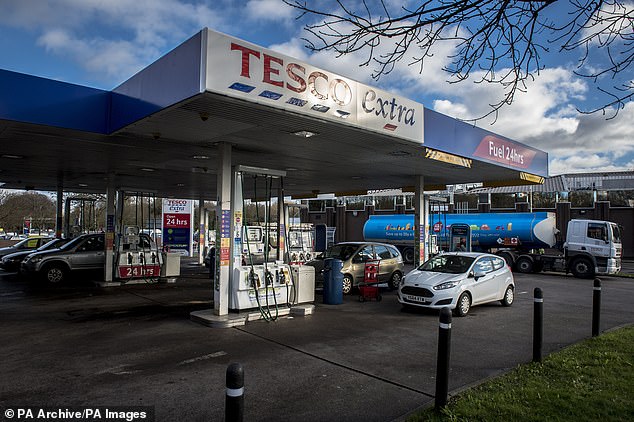 Tesco will reduce the price of a litre of petrol by 1p and diesel by 2p from 5pm on Friday, it confirmed

Tesco will also slash the same amount off a litre of petrol and diesel at its forecourts from 5pm on Friday.

Morrisons and Sainsbury’s announced they would be doing the same – cutting the cost of unleaded by 1p per litre and diesel by up to 2p per litre – but delayed the reductions at their filling stations until Saturday.

Ashley Myers, Morrisons head of fuel, said: ‘With oil prices continuing to fall, we can now make the third cut in fuel prices this month.’

David Pegg, fuel buying manager for Sainsbury’s, also commented: ‘At this busy, festive time of year we are committed to helping our customers live well for less and that’s why we’re dropping the price of unleaded petrol and diesel from tomorrow.

‘Whether in store or at the pumps, customers know they will get fantastic value with Sainsbury’s.’ 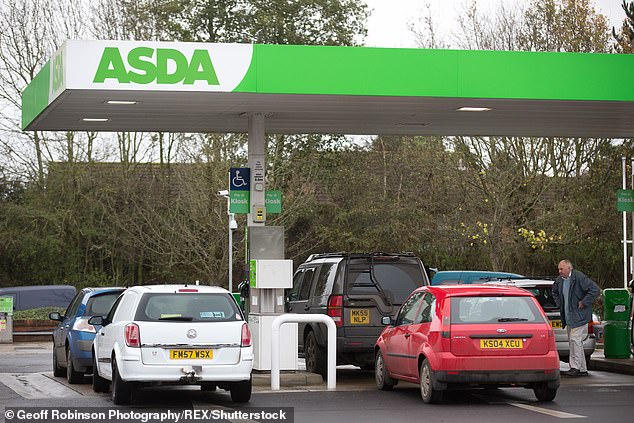 The supermarket was the first to cut fuel prices by 3p a litre last week, sparking competitors to do the same 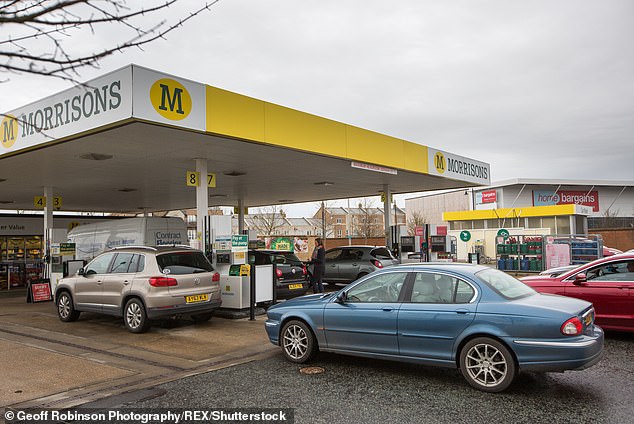 RAC fuel spokesperson Simon Williams said it was great to see motorists benefiting from more reductions but added that they now ‘need to be followed swiftly by other retailers so the UK average price comes down’.

‘After so much of 2018 being characterised by rising fuel prices, it’s heartening to see prices falling just as we enter the expensive festive period,’ he added.

The RAC has consistently been calling for fuel retailers to reduce pump prices with more urgency, claiming that they are quick to inflate forecourt charges when wholesale prices rise but delay reductions at filling stations when they fall.

Over the past six months, the cost of filling up a typical 55-litre family car that runs on petrol or diesel has risen by around £6.

Williams said: ‘While this is obviously good needs, it’s disappointing that it has not come sooner as the wholesale price of petrol has been falling for weeks.’