Supermoon shines on lockdown Britain: People across the country look to the skies

‘Pink Supermoon’ shines on lockdown Britain: People across the country look to the skies as moon puts on giant rose-tinted display

Stargazing enthusiasts have been marvelling at the emergence of a pink supermoon in the night skies over the UK.

Across the country, people have being grabbing cameras and smartphones to try and record the lunar light show, a welcome respite from the coronavirus pandemic.

Twitter users have posted their attempts to capture the view above them and to share their enjoyment at the ‘amazing’ and ‘beautiful’ sight.

Despite its name, there will not be any noticeable colour difference to the full moon, which is due to reach its peak during the early hours of Wednesday at 3.55am.

The Pink Supermoon rises over Windsor in an astronomical event that occurs when the moon is closest to the Earth in its orbit, making it appear much larger and brighter than usual 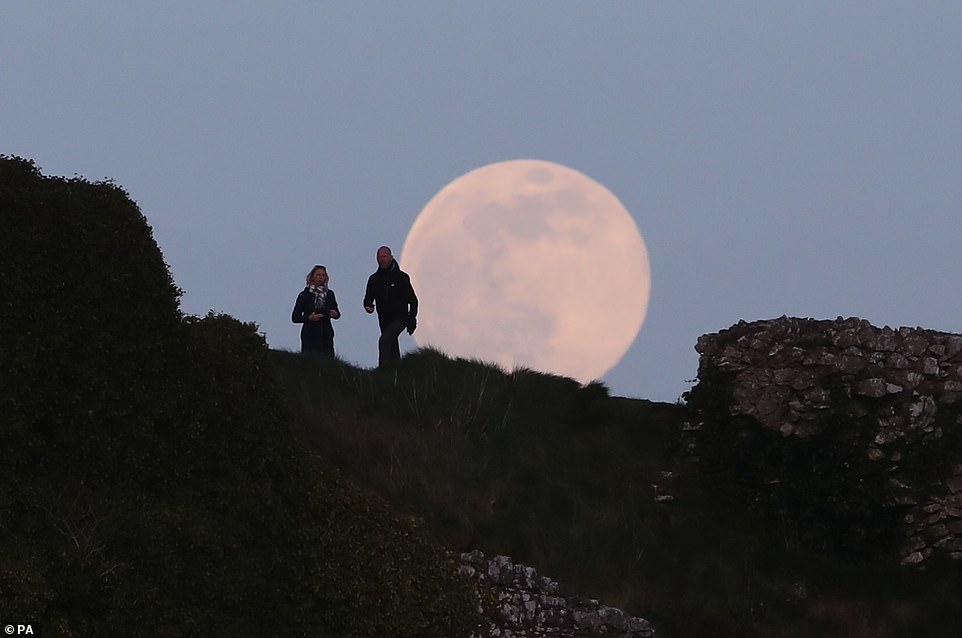 A pink supermoon rises over the Rock of Dunamase in County Laois in the Republic of Ireland this evening, the third supermoon of the year 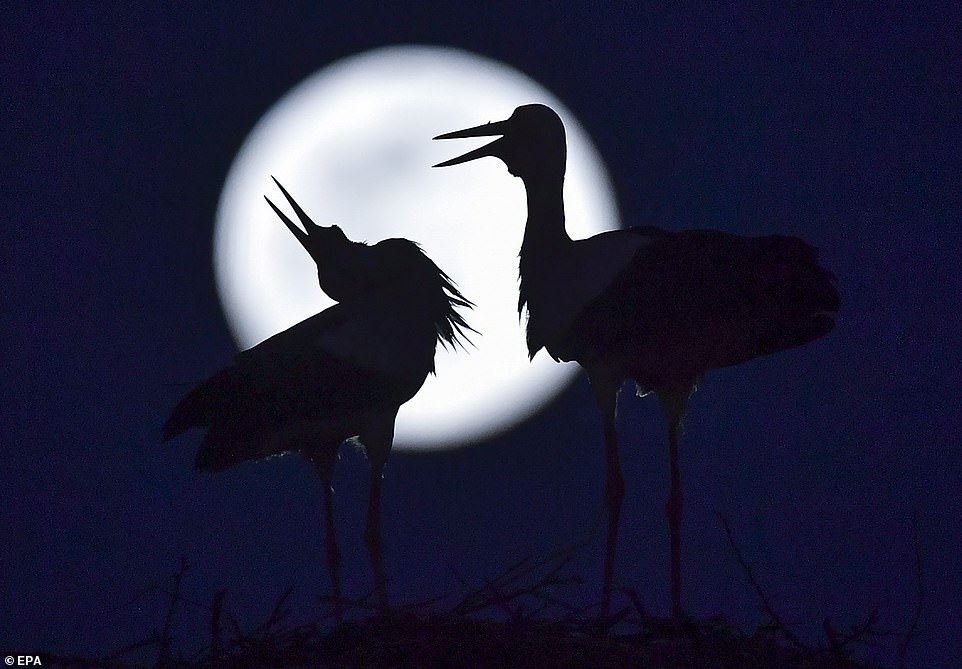 The Super Pink Moon rises behind the storks in their nest in the village of Rzanicino near Skopje, Republic of North Macedonia 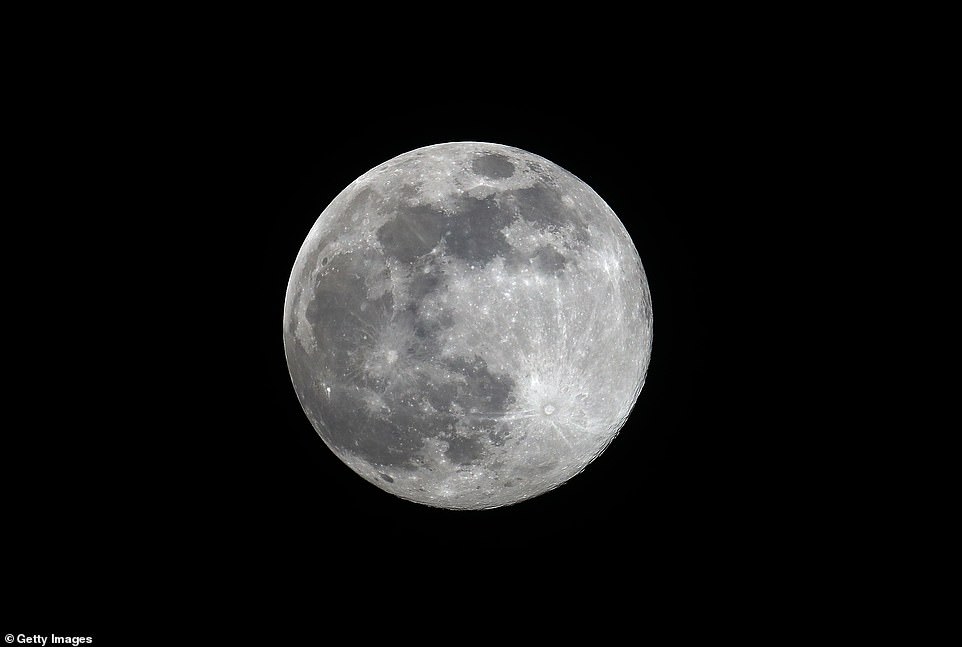 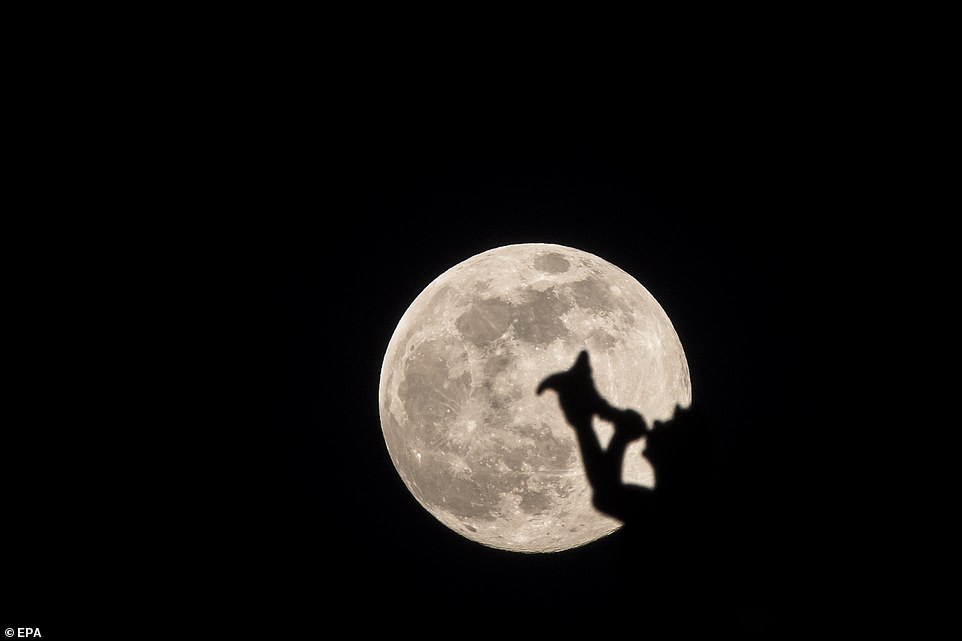 The Super Pink Moon rises behind the angel wind vane of the Burgtheater (Imperial Court Theatre) in Vienna, Austria today

The pink supermoon name is a northern Native American reference to an early-blooming wildflower, which starts to pop up in the US and Canada at the beginning of spring.

One user on Twitter commented: ‘It’s great that we can all do something positive and £lookup in these dark times.’

Another urged fellow tweeters: ‘That moon is beautiful tonight. Look out your window or step into your garden/balcony if you have one.’

‘If anyone needs a moment of calm, take a look at the moon right now,’ another Twitter user commented.

Sarah Jones, who took a photo of the moon from her back garden in Burton on Trent in Staffordshire, said: ‘The moon is one of my favourite things to take photos of, especially when its full. 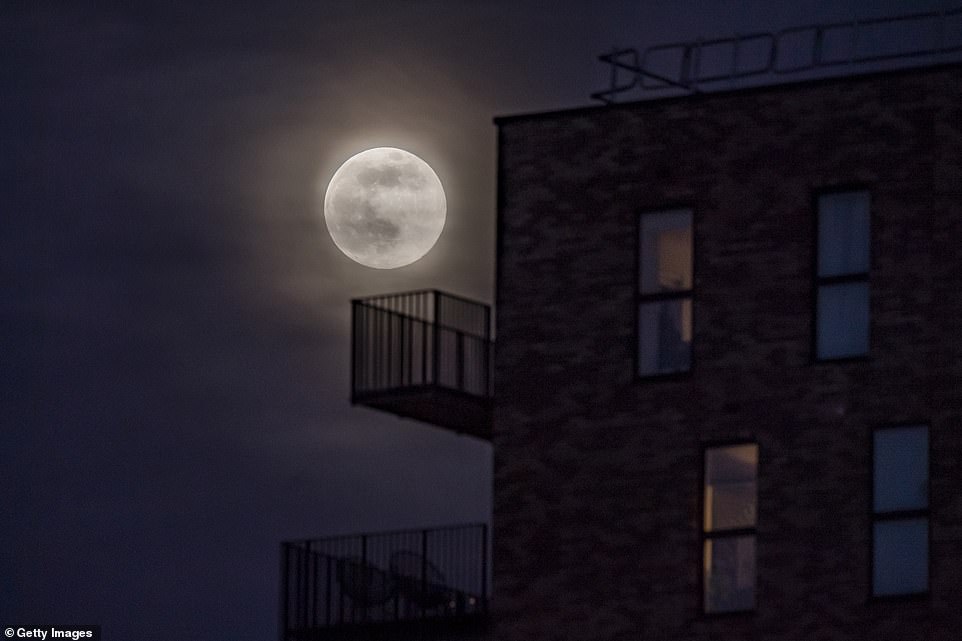 The supermoon rises behind clouds above an apartment block on April 07, 2020 in Manchester, a welcome distraction from coronavirus 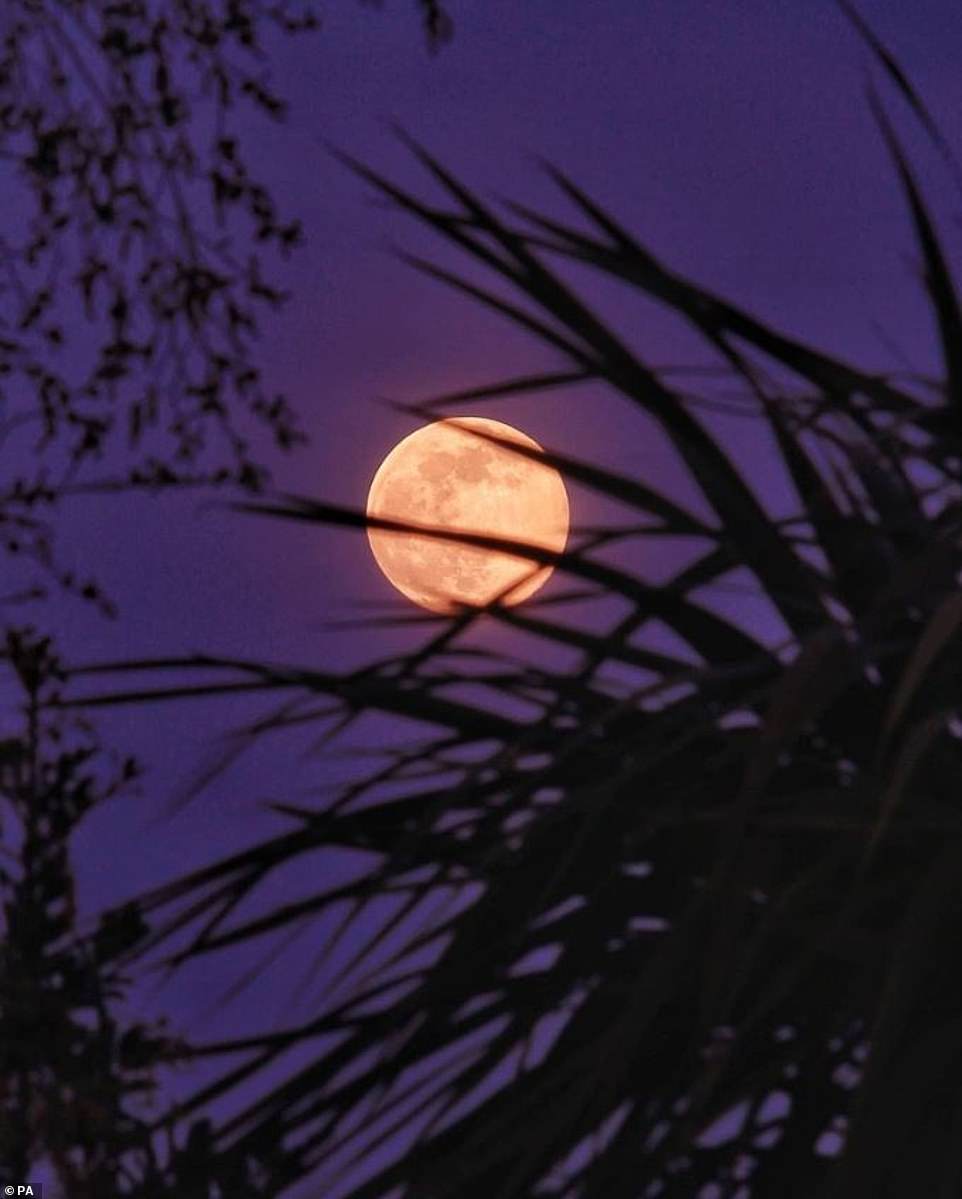 The supermoon over Burton on Trent. Despite its name, there is no actual colour change to the appearance of the lunar surface – it is a Northern Native American reference to an early-blooming wildflower, which starts to pop up in the US and Canada at the beginning of spring 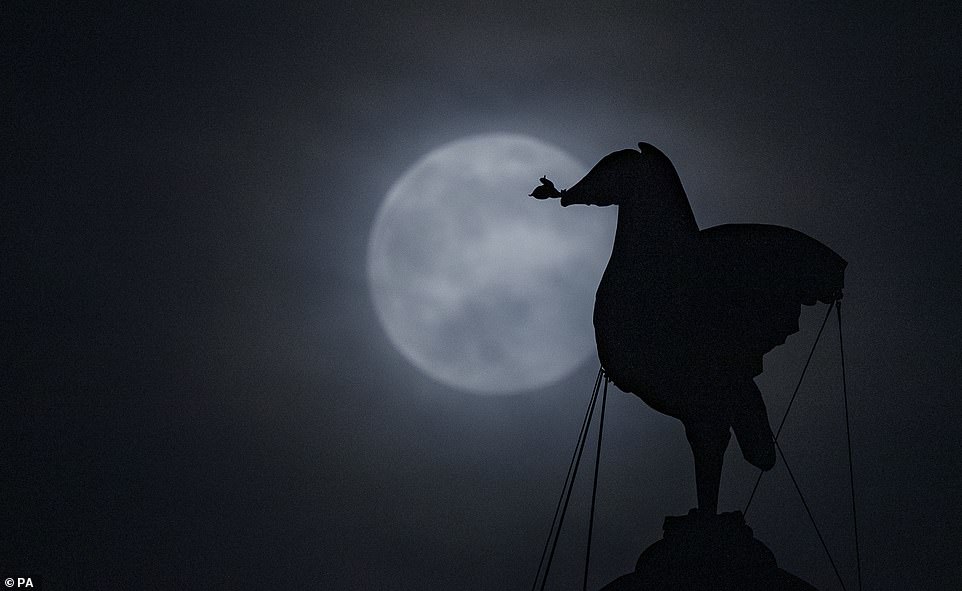 A pink supermoon is seen over The Royal Liverbuilding, Liverpool this evening as people all over the UK and the world strain to get a glimpse 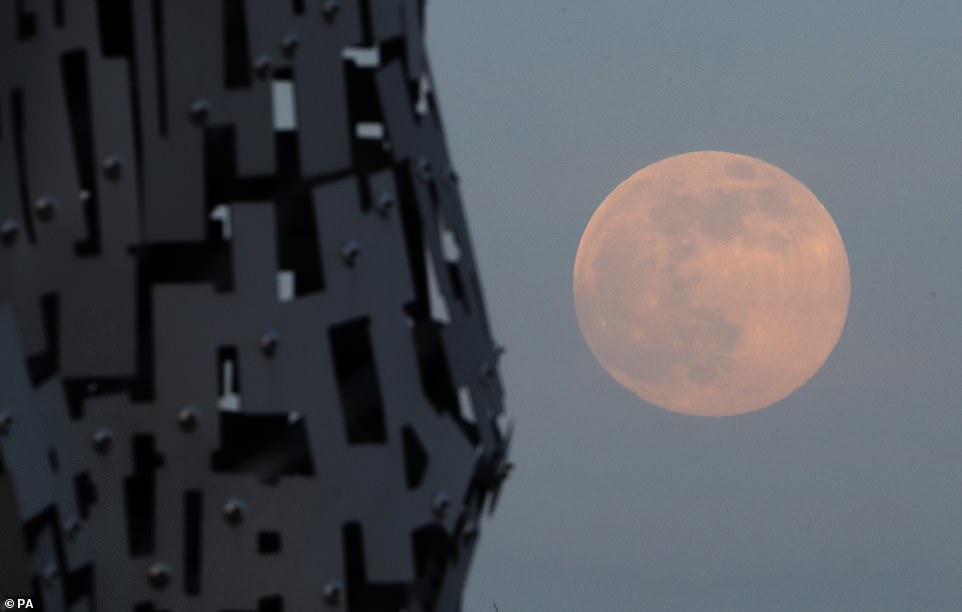 A pink supermoon is seen over the Kelpies sculpture in Falkirk. Despite its name, there is no actual colour change to the appearance of the lunar surface 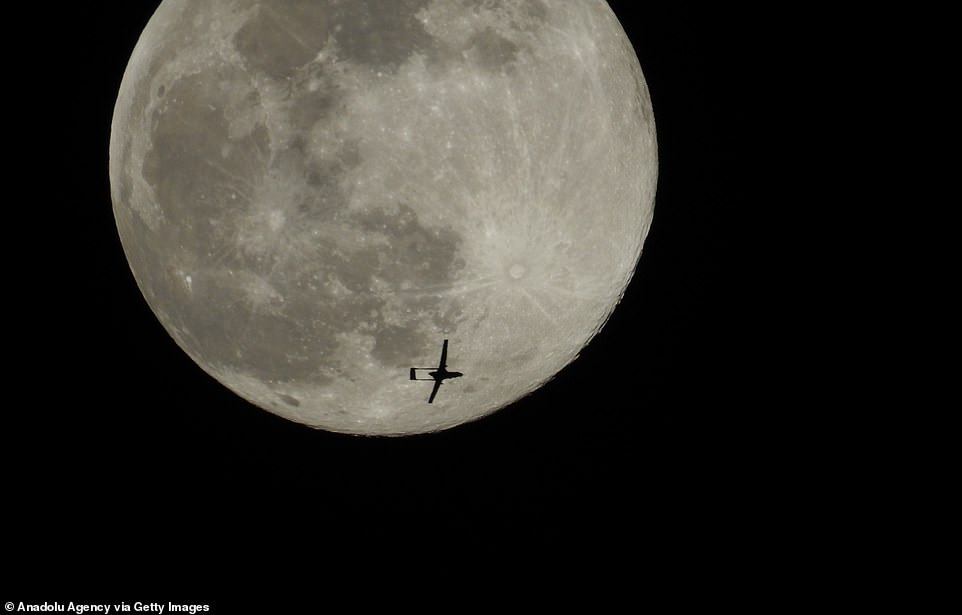 ‘I just find it calming to look at and to know how many people in the world can see the same thing.’

In some other cultures, the pink moon is known as the sprouting grass moon, the egg moon, and the fish moon.

As this will also be a supermoon, people can expect it to look up to 14% bigger and 30% brighter in the sky as it reaches its closest point to Earth, known as its perigee.

April’s supermoon is the third of the year, following the worm moon on March 9.

The next full moon is referred to as the Flower Moon, which takes place on May 7.