When he was young, legend has it that Vichai Srivaddhanaprabha was involved in a spectacular high-speed car crash on the famously dangerous roads of his native Thailand.

To the amazement of onlookers, he walked free from a sickening tangle of wreckage with little more than cuts and bruises.

He attributed his survival to a ‘lucky’ golden Buddhist amulet which he’d purchased with a £400 loan from his father, and was wearing around his neck.

Prince Charles and president of the Thailand Polo Association Vichai Raksriaksorn are seen at the Chakravarty Cup Polo match between Team Thailand and Team Dubai played at the Ham Polo Club in June 11, 2005 in Richmond

Later – after fate, combined with a ruthless and sometimes controversial instinct for business and patronage – had turned him into one of Asia’s wealthiest men with a fortune estimated at almost £4billion, Srivaddhanaprabha became a serious collector of such charms.

Around £10m-worth are now displayed in a special museum at the Bangkok headquarters of King Power, the Duty Free business he founded three decades ago and expanded to become a global household name, with more than 10,000 employees.

The museum is one of many unconventional status symbols acquired by the bespectacled 61-year-old, who may have resembled a provincial accountant, but who for years enjoyed the turbo-charged lifestyle of a serious plutocrat.

Though somewhat uncomfortable in the public eye, and almost never interviewed, the man Thais know by the honorific title ‘Khun’ Vichai was, in recent times, accustomed to rubbing shoulders with the Royal Family, and jetting between homes in Thailand, London’s Chelsea Wharf, and rural Berkshire, where his family owns a vast mansion and where his elite polo team, with 60 staff and 80 ponies, are headquartered on a 100-acre plot, one of his two personal polo estates.

In addition to the £2m Augusta Westland helicopter that tragically crashed on Saturday, he owned a 116-foot Sunseeker yacht with five cabins, a top speed of 26 knots, and an £11m price tag – as well as a Gulfstream G-650 private jet, purchased for £43m from Bernie Ecclestone’s wife, Fabiana, in 2013. 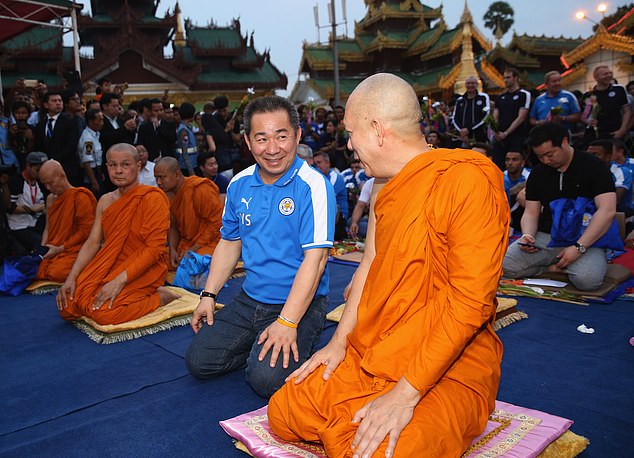 Leicester City owner Vichai Srivaddhanaprabha talks to a Buddhist monk as Premier League champions Leicester City visit Shwedagon Pagoda during their post-season tour of Asia on May 22, 2016 in Yangon, Burma

Some attribute that eye-watering wealth as a major factor in one of sport’s most improbable fairy-tales.

After buying Leicester City in 2010, it took just six years to transform the ‘Foxes’ from a debt-ridden club languishing in the middle reaches of English football’s second tier to the most unlikely Champions in the history of the Premier League.

Others argue that he owed the famous title – won at odds of 5,000/1 – to the sort of outrageous good luck that was following him on the day of the aforementioned car crash.

Vichai Srivaddhanaprabha was certainly superstitious, and would regularly fly a plane-load of monks to the Midlands from Thailand’s Golden Buddha temple in order to bless both Leicester’s pitch and players in advance of a match.

He even built them a designated shrine at the King Power stadium, which is decorated with Buddhist statues and hangings.

Before kick-off, the monks would bless the goal-posts and corner flags, before adjourning to the changing room to splash holy water on the players’ legs and feet.

‘It’s like you’re literally having a shower, there’s that much water going everywhere,’ said the team’s star striker, Jamie Vardy, after one game. ‘That’s the Thai culture and we are happy for them to do it.’

In the directors’ suite, things were similarly unconventional: Srivaddhanaprabha would greet his guests, who often included a smattering of minor celebrities (he apparently had a thing for X Factor stars, and was a huge fan of US saxophonist Kenny G) to expensive claret, served ice cold.

‘His drink of choice was a £200 bottle of St Emilion red wine that he would stick in the fridge,’ recalled a former assistant, Alex Hylton. ‘I don’t think that was a Thai thing – I think it was a Vichai thing. I’m no connoisseur but it still broke my heart to put a Grand Cru in the fridge.’

Whenever Leicester won, his generosity was boundless. Along with his four children, who were all in one way or another involved in his business affairs (King Power is very much a family firm, his wife of more than 30 years, Aimon, is vice-chair) he celebrated promotion to the Premier League in 2014 by inviting the squad for a meal of caviar and fine wine in a plush west London restaurant.

Having paid the bill, he then gave each player and member of the club a £1,000 chip to gamble at a private members club nearby. 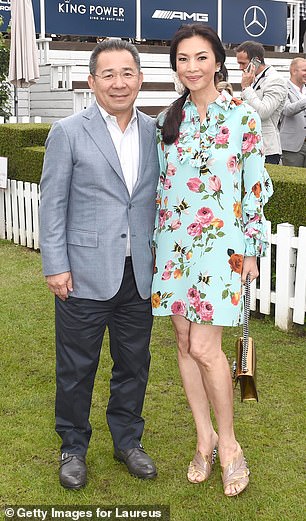 To mark the team’s illustrious title, in 2016, players were each given a BMW i8 sports car, worth more than £100,000, and invited to another big night out at a Leicester casino, where Srivaddhanaprabha reportedly hit one of his familiar lucky streaks, winning more than £2 million on the card tables in a few hours.

It was at least some payback for the £150m he’s reputed to have put into the club, for which he paid £39m, spending freely on players, buying the Walkers stadium – to be renamed King Power – and wiping out its £103m debt in order to secure Leicester’s future.

‘We don’t run the team in the hopes of making a big fortune from it. We just want to gain recognition of our brand,’ said his son Aiyawatt, who looks after much of its day-to-day running.

‘If you spend a hundred million dollars to buy a hotel, perhaps only 100 people recognise your brand. But buy a football team in England and suddenly the whole world becomes aware of King Power.’

Today, Leicester City is thought to be worth around £350m, almost ten times what he paid for it. In May 2017, Srivaddhanaprabha brought a second club, Belgian side OH Leuven.

Fans would also benefit from his largesse. Many was the time when the Leicester City faithful were handed vouchers entitling them to a free bag of doughnuts and a bottle of Singha Thai beer, or given heavily subsidised coach travel to away matches.

To mark his 60th birthday, sixty veteran supporters were told that this year’s season ticket was on the house. In fact, season ticket prices for the last four seasons have remained frozen. On a more serious note, in 2016 he wrote a cheque for more than £2m to a local children’s hospital.

These flamboyant gestures of generosity – a welcome contrast to the charmless zeal with which other overseas investors have corporatised top flight British football – explain the huge esteem in which Srivaddhanaprabha is held in the city of Leicester. Tearful fans converged on the stadium yesterday to leave flowers and other tributes.

His story began in April 1957, when he was born Vichai Rakriaksorn to wealthy Thai Chinese parents who sent him to study in both Taiwan and the United States.

He described his interest in the business of duty free as being a product of his jet-setting childhood. Many of his flights home would stop in Hong Kong. ‘As I grew up I saw duty-free businesses from all over the world. I found it an interesting business … so I said to myself I might be able to do it,’ Vichai revealed in one of his few interviews.

He began as an agent for luxury brands before investing in a duty-free business in Hong Kong that he eventually acquired and renamed King Power in the late 1980s. It chuntered along for almost two decades, but suddenly hit the big time in 2006 after securing the exclusive rights to run duty-free stores in Bangkok’s Suvarnabhumi Airport, now the twelfth busiest in the world.

Although Shinawatra was removed from power in a coup in September 2006, Srivaddhanaprabha businesses continued to thrive under the military junta that replaced him.

‘Vichai has made his money by being close to politicians, that’s how you have to do it,’ a member of the Bangkok business community told the Guardian in 2016. ‘Before that he was an average businessman.’

In addition to politicians, Srivaddhanaprabha also successfully courted Thailand’s immensely powerful monarch. King Power was granted a royal warrant in 2009, and in 2012, he was by way of an honour given his surname, which literally means ‘light of progressive glory’.

The firm has duly expanded to Cambodia, Macau and China, and diversified into restaurants, hotels and solar power. It also owns a £150m stake in Thailand’s largest budget airline.

A longstanding Anglophile, Srivaddhanaprabha and his wife Aimon – who in recent years had to contend with rumours of her husband’s alleged, fleeting dalliance with a glamorous Thai socialite who was made a director of Leicester City – were happily settled here. They chose to educate their three eldest children – Voramas, Apichet, nicknamed ‘Tip’, and Arunroong, who are all in their thirties – at boarding school in England. The youngest son, Aiywatt, 30, known as ‘Top’, was schooled in Bangkok.

Their connection to the UK lies not just in football, or the luxury properties the family owns (most of which are registered to holding companies in the tax haven of the British Virgin Islands), but in the family’s involvement in polo, which has brought an entrée into the British establishment, right up to the royal family.

For almost two decades, Srivaddhanaprabha has been one of the sport’s most free-spending patrons. He singlehandedly introduced polo to Thailand, building a floodlit ground on the outskirts of Bangkok, and runs one of the world’s most successful teams.

His involvement in the sport, which his sons also play almost full-time during football’s off season, frequently saw him playing alongside Prince Charles.

He first met the heir to the throne in June 2005 at a charity match in Richmond, called the Chakravarty Cup, when they were on the same team, alongside Prince William.

Srivaddhanaprabha was also President of the exclusive Ham Polo Club in Richmond, Surrey, from 2008-12. Its chairman Nicholas Colquhoun-Denvers, a friend of the family, once told the Mail: ‘[Srivaddhanaprabha and his sons] are very pleasant to be with. Some people in our sport get very wound up and over-excited, whereas they are the sort who win or lose will say, “Wasn’t that fun”.

‘They seem much more philosophical than others, whether that comes from their religion I don’t know.’

In the last year, Srivaddhanaprabha had also started investing heavily in racehorses, spending around £15m on a British-trained string that now numbers about 60. Several were given football-themed names, including Fox Vardy and Fox Kasper – the latter named after Leicester’s goalkeeper Kasper Schmeichel.

Then there’s a two-year-old, brought for £378,000, called Come On Leicester. Earlier this month it romped home in a six- furlong sprint at Leicester racecourse, a stone’s throw from the King Power stadium. The winning odds were 9/4.

Sadly, for so many connected with this football club and this city, Vichai Srivaddhanaprabha’s luck seems to have finally run out.