Supplement that mimics fasting reduces heart attack risk up to 25%

A new pill mimics the effects of a crash diet and slashes the risk of a heart attack by up to 25 per cent, a study claims.

The tablet contains nicotinomide riboside, a form of vitamin B3, that is advertised as promoting endurance, energy and healthy ageing.

And a new study, involving 24 lean and healthy volunteers, found taking it twice a day can reverse cardiovascular ageing.

It works in the same way as a calorie restricted diet, which boosts the health of blood vessels and reduces blood pressure in middle aged patients.

Recreating the effects of fasting

Studies have shown restricting calories can fend off physiological signs of ageing.

Studies in fruit flies, roundworms, rodents and even people showed chronically slashing intake by about a third can reap myriad health benefits and, in some cases, extend lifespan.

But this extreme fasting can be dangerous for some people.

ARE FASTING DIETS GOOD FOR THE HEART?

Following a ‘fashionable’ fast for just one week can damage the heart, research suggested in February 2018.

Obese people who suddenly lower their calorie intake to just 600-to-800 units a day, experience heart-fat level increases of 44 per cent, a trial found today.

Despite such dieters on average losing six per cent of their total body fat after just seven days, this fat is released into their bloodstream and absorbed by their hearts, the researchers explained.

Although this excess heart fat balances out by week eight of dieting, for people with heart problems, it could leave them breathless and with an irregular beat, the scientists add.

Study author Dr Jennifer Rayner from the University of Oxford, said: ‘Otherwise healthy people may not notice the change in heart function in the early stages.

‘But caution is needed in people with heart disease.’

Heart disease, which is linked to obesity, affects more than 1.6 million men and one million women in the UK.

Dr Rayner added:’The heart muscle prefers to choose between fat or sugar as fuel and being swamped by fat worsens its function.

‘People with a cardiac problem could well experience more symptoms at this early time point, so the diet should be supervised.

‘Otherwise healthy people may not notice the change in heart function in the early stage.’

The researchers analysed 21 obese volunteers with an average age of 52 and a BMI of 37kg/metre squared.

The study’s participants ate a very low-calorie diet every day for eight weeks.

MRI scans were taken at the start and end of the investigation, as well as after week one.

The supplements also improved blood pressure and arterial health, particularly in those with mild hypertension.

Professor Doug Seals in the Department of Integrative Physiology said: ‘This was the first ever study to give this novel compound to humans over a period of time

‘We found that it is well tolerated and appears to activate some of the same key biological pathways that calorie restriction does.’

Half of the study’s participants – aged between 55 and 79 – were given a placebo for six weeks, then took a 500 mg twice-daily dose of nicotinamide riboside chloride (NIAGEN).

The other half took NR for the first six weeks, followed by placebo.

The researchers took blood samples and other physiological measurements at the end of each treatment period.

A 1,000 mg daily of NR boosted levels of another compound called nicotinamide adenine dinucleotide (NAD+) by 60 per cent.

NAD+ is required for activation of enzymes called sirtuins, which are largely credited with the beneficial effects of calorie restriction.

It’s involved in a host of metabolic actions throughout the body, but it tends to decline with age.

Research suggested that as an evolutionary survival mechanism, the body conserves NAD+ when subjected to calorie restriction.

But only recently have scientists begun to explore the idea of supplementing with so-called ‘NAD+-precursors’ like NR to promote healthy ageing.

Dr Chris Martens, then a postdoctoral fellow at Boulder and now assistant professor at the University of Delaware explained: ‘The idea is that by supplementing older adults with NR, we are not only restoring something that is lost with ageing (NAD+), but we could potentially be ramping up the activity of enzymes responsible for helping protect our bodies from stress.’

A drop of that magnitude could translate to a 25 per cent reduction in heart attack risk.

He added: ‘If this magnitude of systolic blood pressure reduction with NR supplementation is confirmed in a larger clinical trial, such an effect could have broad biomedical implications.’

Such caloric restriction mimicking compounds could provide an additional option, alongside the dietary changes and exercise currently recommended, for people whose blood pressure is not yet high enough to warrant medication but who are still at risk for a heart attack. 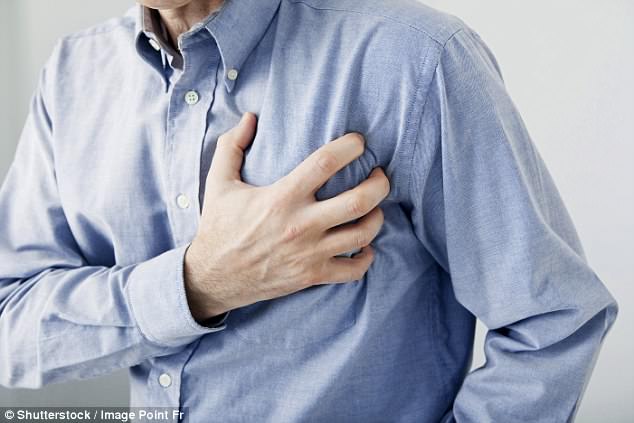 Prof Martens added: ‘We are not able to make any definitive claims that this compound is safe or going to be effective for specific segments of the population.

‘What this paper provides us with is a really good stepping stone for future work.’

Further studies are planned for a larger clinical trial to look at the impact of NR supplementation on blood pressure and arterial health and the impact NR has on older adults with mild cognitive impairment, a precursor to Alzheimer’s disease.

The study was published in the journal Nature Communications.