If you’re trying to beat the bulge, probiotics could come in handy.

Scientists have once again found the live microorganisms that boost ‘good bacteria’ in the gut can enhance weight loss.

They studied a group of overweight children taking supplements. All of them were also given an exercise regime and diet plan.

Critics said it’s too early to jump to conclusions considering the study is yet to be published in a journal.

However, it’s the latest of a swathe of evidence suggesting the gut microbiome could play a powerful role in weight regulation.

The research, carried out by Fuzhou Children’s Hospital in China, involved 54 obese children between six and 14 years old.

Thirty were randomly assigned to take probiotic pills and 24 were in the placebo group. The trial lasted 12 weeks.

Those who had been treated with probiotic supplements lost significantly more weight – but the authors did not quantify how much.

The children in the probiotics group also had better metabolic health, measured by level of inflammatory proteins and blood glucose levels.

This may also prevent the children from developing obesity related disorders in the future, such as type two diabetes and heart disease.

Professor Chen said: ‘More work is needed to confirm these findings, our number of participants was small and limited to the Fuijan area.

‘Other studies have also reported no benefits from probiotic treatment in obese children but these were much shorter in duration.

‘Further investigation is needed before any medical recommendations can be made.’

The team now plan to conduct more widespread trials to analyse how probiotics alter the gut.

By many accounts, probiotics can boost the diversity of gut bacteria, keeping the digestive system working efficiently.

The children in the study took probiotic capsule that contained different strains of live bacteria, each of which have been found to have some positive benefits in research.

This includes Lactobacillus bulgaricus, found in yoghurts and fermented food. The Lactobacillus family has been shown to slash belly fat as well as reduce the number of calories taken from food.

However, an independent expert said it’s not possible to judge the probiotics in this study as effective yet, because the study is not peer-reviewed or published.

Glenn Gibson, professor of food microbiology, at University of Reading, said: ‘The probiotics used are not well described. Only species designations are given.

‘No faecal microbiology seems to have been done, this is essential if the authors wish to claim probiotic effects.’

He added: ‘The gut microbiota is known to be involved in satiety, appetite regulation and calorie regulation. So there are plausible mechanisms behind these findings.’

Professor Chen said: ‘Childhood obesity is a growing problem that needs early intervention to prevent long-term health problems; microbiome-based treatments could be a new and more effective strategy for tackling this serious epidemic.’

Strategies to curb childhood obesity is high on the Governments agenda.

The proportion of children who are severely obese in England has risen by more than a third since 2007, figures show.

Worldwide, 41million children under five were overweight or obese compared to 1990, according to The World Health Organization.

The findings were presented at the European Society for Paediatric Endocrinology’s annual meeting in Vienna, Austria. They have not been published in a journal. 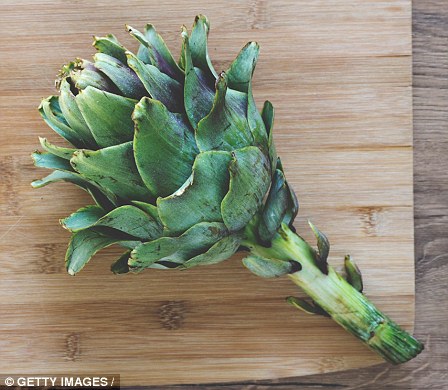 Prebiotics can be found in small quantities in artichokes

Prebiotics work differently to probiotics as they help to feed the ‘good’ bacteria in the digestive tract.

Whereas probiotics only add beneficial bacteria to the gut to rebalance levels.

Prebiotics are a form of natural, indigestible starch found in small quantities in foods such as banana, onions, leeks, asparagus and Jerusalem artichokes.

And they can be added to a wider selection of foods than probiotics because they do not have the same storage problems as ‘live’ products.

As well as boosting bacteria levels, pre-biotics are thought to encourage the absorption of bone-strengthening calcium thanks to the way they are digested.

And this comes after a study earlier this week found that prebiotics could help stressed people sleep easier at night.

Scientists from the University of Colorado Boulder pointed to onions, leeks and artichokes as being the main sources of the dietary fibers.

Alongside their already proven benefits of boosting gut health, they were found to release metabolic byproducts which influence the brain into overcoming worry and fear.

MICROBIOME: DOES IT CONTROL EVERYTHING?

Researchers now estimate that a typical human body is made up of about 30 trillion human cells and 39 trillion bacteria.

These are key in harvesting energy from our food, regulating our immune function, and keeping the lining of our gut healthy.

Interest in, and knowledge about, the microbiota has recently exploded as we now recognise just how essential they are to our health.

A healthy, balanced microbiome helps us break down foods, protects us from infection, trains our immune system and manufactures vitamins, such as K and B12.

It also sends signals to our brain that can affect mood, anxiety and appetite.

Imbalances in the gut are increasingly being linked to a range of conditions. Last year, scientists at California Institute of Technology found the first ever link between the gut and Parkinson’s symptoms.

The composition of our gut microbiota is partly determined by our genes but can also be influenced by lifestyle factors such as our diet, alcohol intake and exercise, as well as medications.