A series of early polls show a jump in support for impeachment compared to a few months ago, as the House barrels forward with investigations with new urgency after the release of President Trump’s Ukraine call.

A new Hill-HarrisX poll released Friday showed a 12 point jump in favor of impeachment compared to three months ago. Opposition dropped by three percentage points to 43 points per cent.

The percentage of Americans favoring impeachment hit 49 per cent in a new poll Thursday, as House Speaker Nancy Pelosi said Democrats were ‘crossing the Rubicon’ on impeachment.

On Thursday, on a day a whistle-blower’s bombshell complaint charging President Trump with abuse of power was declassified, Americans backed impeachment by 49 to 46 per cent, according to an NPR / Marist poll.

Support among Independents was at 44 with 50 per cent against in the poll, which was taken overnight after Pelosi announced she was backing a formal impeachment effort. That split signals that the political question of impeachment and how it will ultimately play in the elections is far from settled.

The increase in support comes as Trump’s campaign repeatedly seeks to fundraise off the impeachment drive. A new video the president tweeted accuses Speaker Nancy Pelosi and Senate Minority Leader Charles Schumer of trying to ‘steal the election.’

About a week ago, a Quinnipiac poll had support for impeaching and removing the president from office had support at 37 per cent. That poll was conducted Sept. 19-23 – before the release of a whistle-blower’s report and before Speaker Pelosi and a stampede of Democrats came out for impeachment.

Back in April, just 39 per cent backed impeachment, compared to 53 per cent against.

A Politico / Morning Consult poll released Thursday had support for impeachment at 43 per cent – up 7 points from just over the weekend. That poll was conducted Sept. 24-26.

Speaking about the Marist poll, Lee Miringoff, who conducted it, said: ‘Democrats in the House have work to do to convince people of the usefulness of their case.’ He noted that independent voters ‘still need to be convinced’ of the wisdom of the effort.

The uptick comes as the Trump campaign and Republican campaign groups gleefully announced that Democrats were walking the plank on impeachment and were likely to be punished at the polls.

Trump on Friday continued to go after the whistle-blower, an unidentified CIA agent according to the New York Times. A day earlier he said people who gave information to him were like ‘spies’ and mentioned past punishments for people convicted of treason – namely execution.

A series of releases by the House campaign arm, the NRCC, went after individual Democratic House members Tuesday for caving to ‘socialists’ and the ‘rabid’ left-wing despite prior misgivings about impeachment.

Pelosi has repeatedly warned of the risks of proceeding without public backing on the effort, and only joined her parties effort Tuesday, after a furious controversy over  whistle-blower’s allegations of abuse and revelations of Trump’s July phone call with the president of Ukraine where he asked for a ‘favor’ and sought an investigation of rival Democrat former vice president Joe Biden.

But on Thursday, following the release of the transcript of that call and a whistle-blower’s report, Pelosi indicated she was fully on board with the process. 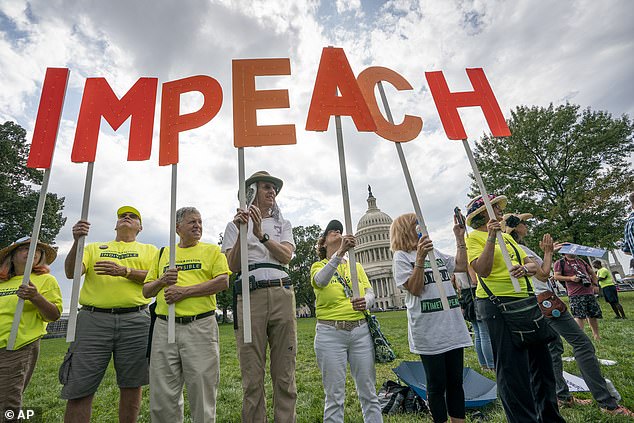 Activists rally for the impeachment of President Donald Trump, at the Capitol in Washington, Thursday, Sept. 26, 2019. Speaker of the House Nancy Pelosi, D-Calif., committed Tuesday to launching a formal impeachment inquiry against Trump 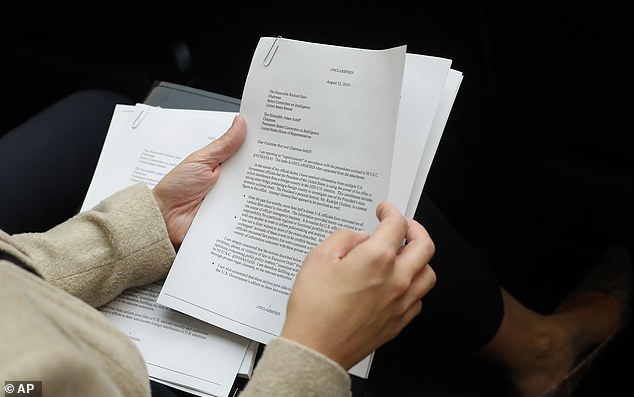 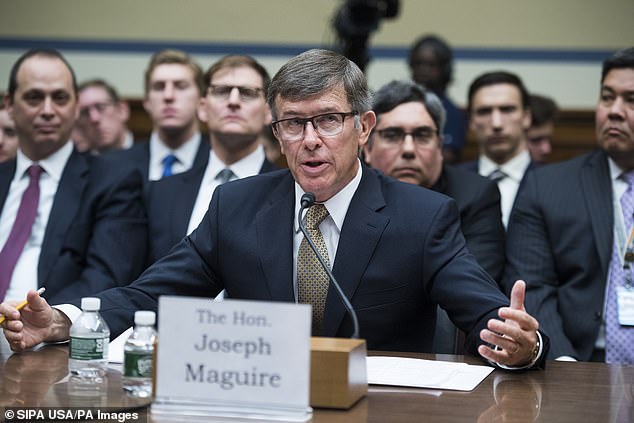 Joseph Maguire, acting director of national intelligence, testifies during the House Intelligence Committee hearing, said the whistle-blower ‘did the right thing.’ The poll was taken before his testimony 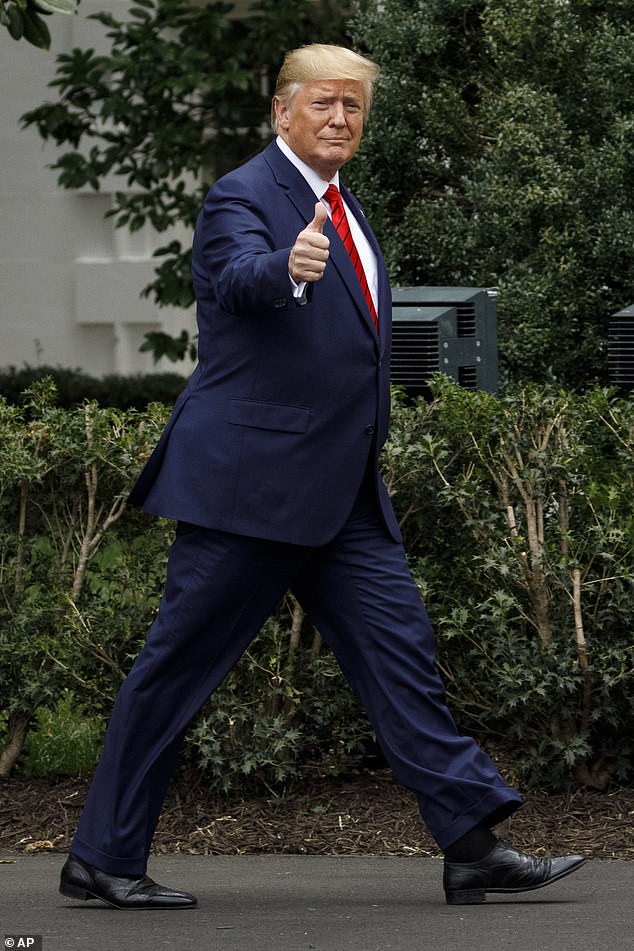 President Trump has railed against the ‘witch hunt’ and says Pelosi is captive to the left wing of her caucus, as impeachment still lacks majority support

‘Use any metaphor you want – crossing the Rubicon, a new day has dawned, alea iacta est, which is what they said when they crossed the Rubicon – any analogy, we are at a different level of lawlessness that is self‑evident to the American people, which is clearer than saying the President obstructed Congress because he wouldn’t let us see these records,’ she said.

‘This is a cover-up,’ she said, referencing the whistle-blower’s allegation that the Ukraine call was placed in a separate secret server normally used for top-level classified information to keep it out of sight.

The poll showed 59 per cent support for the effort among white, college educated women, a key Demographic in the suburbs where the parties are battling. Non-whites also back it by 57 per cent, but whites are at 46 per cent, with 50 per cent against.

Trump’s approval rating is at just 42 per cent in a new Reuters / Ipsos poll, and his consistently sub-50 popularity may influence the impeachment numbers.