Seth Rogen, who is Jewish, drew criticism over his remarks about Israel this week

Seth Rogen is facing backlash from supporters of Israel after saying that he was fed a ‘huge amount of lies’ about the country as a child and didn’t know the Jewish state was created where Palestinians were already living.

The Hollywood actor, who attended Jewish schools and camps growing up in Canada, opened up this week about his Jewish heritage in an interview on the WTF with Marc Maron podcast.

‘As a Jewish person I was fed a huge amount of lies about Israel my entire life,’ the actor said of his experience in Jewish schools.

‘They never tell you that, “Oh, by the way, there were people there”. They make it seem like it was just like sitting there, like the f***ing door’s open. They forget to include the fact to every young Jewish person.’

More than 700,000 Palestinians fled during the 1948 war that led to the creation of Israel, according to UN estimates.

The remarks drew strong backlash from pro-Israel quarters, however. ‘So should 9 m. Israelis just turn off the lights & call it quits?’ tweeted David Harris, CEO of the American Jewish Committee. 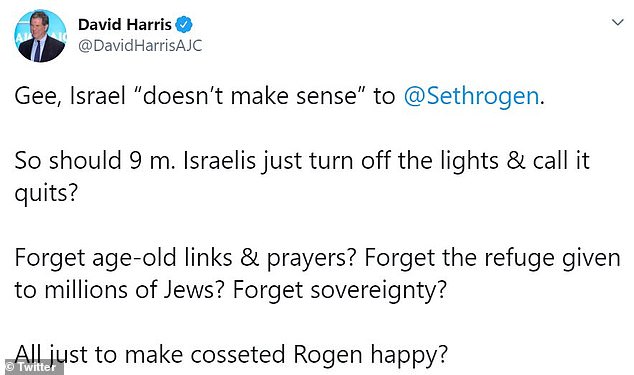 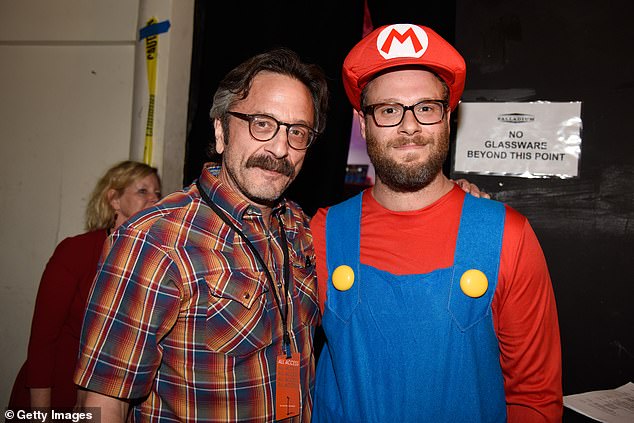 Others questioned Rogen’s remarks about whether Israel makes sense as a refuge for Jewish people.

Rogen said on the podcast: ‘If it is for truly the preservation of Jewish people, it makes no sense, because again, you don’t keep something you’re trying to preserve all in one place – especially when that place is proven to be pretty volatile, you know?’

Shiri Moshe, a foreign policy analyst, tweeted: ‘Lots to unpack in Seth Rogen’s claims, but the argument that Israel makes “no sense” as a means of preserving Jewish life is particularly ludicrous.’ 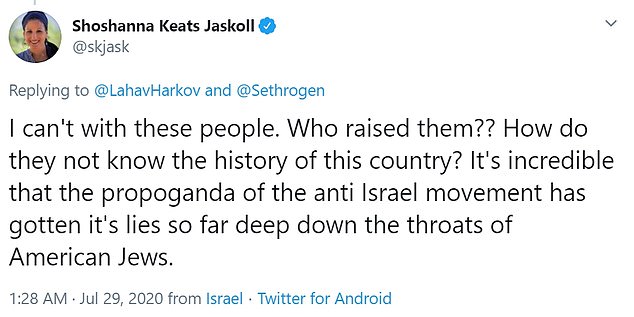 Moshe said that Israel served as a refuge for ‘airlifted Iraqi, Yemenite and Ethiopian Jews found a safe haven, along with the majority of Mizrachi refugees.’

‘And to argue that Israel is “pretty volatile” and therefore unsafe for Jews – by that measure, considering Jewish history, most of the world should be off-limits to us. Such nonsense,’ Moshe added.,

Lahav Harkov, an Israeli journalist, tweeted: ‘I feel like @Sethrogen’s comments are made from a position of really, really great privilege – and ignorance – if he can’t understand why Israel makes sense to millions of Jews around the world. I just hope he appreciates it.’

Another Jewish Israeli journalist, Shoshanna Keats Jaskoll, wrote that Rogen’s remarks were the result of ‘the propoganda [sic] of the anti Israel movement.’ 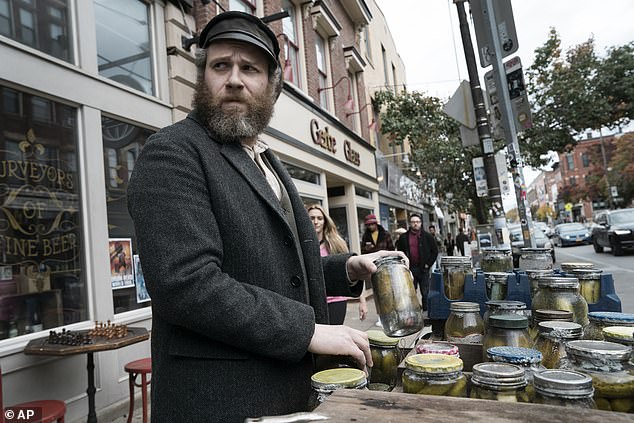 The 38-year-old actor was being interviewed to promote his new film The American Pickle. The comedy centers on a Jewish immigrant in the 1920s who falls into a vat of pickle brine, is preserved for 100 years and wakes up in modern-day Brooklyn

However, pro-Palestinian groups and critics of Israel applauded Rogen’s remarks on the divisive subject.

‘Thanks @Sethrogen for criticising the colonial myths about Israel’s creation. 700,000 Palestinians were ethnically cleansed by Israeli apartheid,’ tweeted the Palestinian Campaign for the Academic and Cultural Boycott of Israel, a group supporting the controversial ‘Boycott, Divestment and Sanctions’ movement.

Both Rogen and Maron, who is also Jewish, said in the podcast that they would never live in Israel.

Maron acknowledged: ‘We’re gonna p**s off a bunch of Jews.’

Following the podcast, Rogen has made limited comments about the controversy, but in replying to one critical tweet he wrote: ‘I’ve been to Israel a few times. My parents met there.’

In another reply to an angry remark, he tweeted: ‘For a Jewish person, you really can’t take a joke.’

Rogen, a 38-year-old actor, was speaking to fellow comedian Maron to promote his new film The American Pickle.

The comedy centers on a Jewish immigrant in the 1920s who falls into a vat of pickle brine, is preserved for 100 years and wakes up in modern-day Brooklyn.