Thousands of football fans eager to attend the upcoming AFL finals have been left stranded after Ticketek Australia suspended sales due to ‘technical difficulties’.

Some fans were lucky enough to secure their tickets prior to the site crashing but on Tuesday afternoon anyone attempting to purchase tickets for the finals was being told that the sale is ‘on hold’.

A number of fans took to Ticketek’s Facebook page to express their frustrations with the purchasing issues.

‘Have waited patiently from 9am to 1pm and at 12:58 (sic) I was given a chance to purchase, but 2 minutes (at 1pm) the site closed down to members,’ one user wrote.

‘I have a broken heart right now not getting a chance to support my club & my stress levels are through the roof after trying since 8.50am to get tickets with system crashing every time even making it to check out. Absolutely disgusting & poor performance,’ another added.

The tickets were made available for this weekend’s finals games, three in total, being played in both Sydney and Melbourne.

At 9am on Tuesday morning Ticketek Australia posted on its Twitter that the web page was up and running and ‘thousands of fans are transacting right now’.

However as of 4pm on Tuesday afternoon tickets were still on hold. 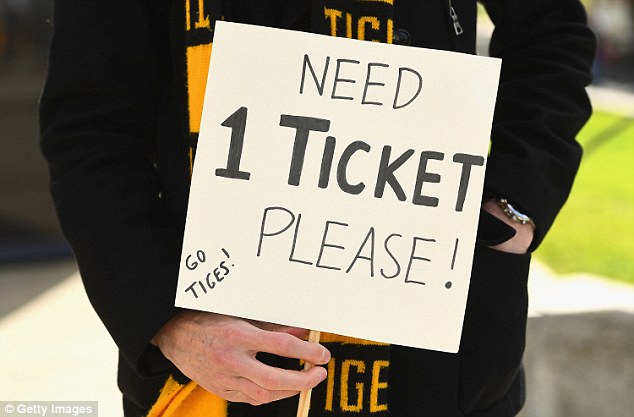 The tickets were made available for this weekend’s finals games, three in total, being played in both Sydney and Melbourne but fans have been left stranded with sales ‘on hold’

General public tickets were set for a 2pm release and Melbourne Cricket Club members’ tickets were supposed to be made available at 12pm.

The Australian Football League posted a statement to its Facebook page addressing the ticketing issues.

‘Ticketek Australia has advised the AFL that the club member ticket on sale has been put on hold until the issue with the Ticketek system is rectified,’ the statement read.

‘We will keep club members up to date when the on sale recommences.

‘The general public on ale period will now be delayed and we will communicate a new on sale time.’ 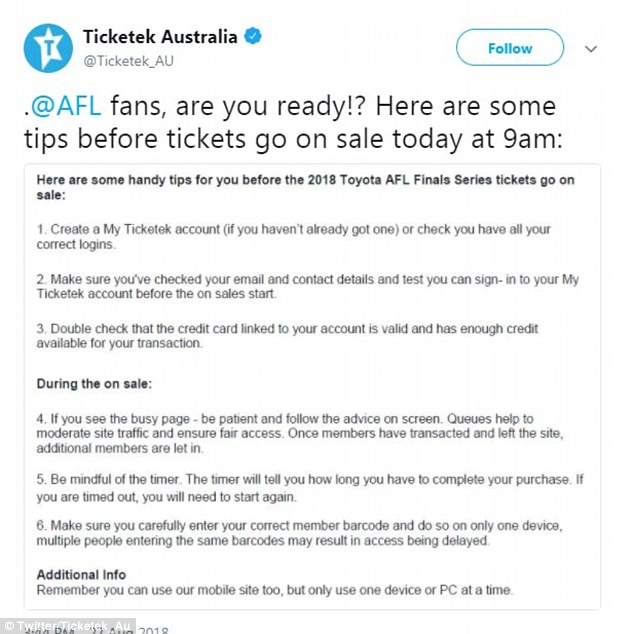 The post was amended later in the day in an attempt to alleviate fan frustration.

‘We understand your frustration and thank you for your patience. We are working with Ticketek, the MCC and SCG on a revised on-sale schedule and will communicate this to all members and fans as soon as possible,’ the update read.

Defending champions, Richmond, also reached out to its fan base via social media.

‘We are aware of the issues members have faced with purchasing tickets to Richmond versus Hawthorn this morning,’ the club’s post read.

‘Please know there are still tickets available and we will communicate the selling of tickets to members as soon as we get an update from both the AFL and Ticketek Australia. We appreciate your patience.’ 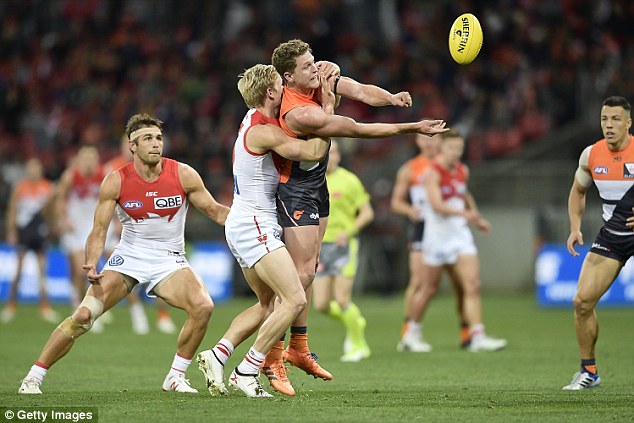 Despite assurances from both the AFL and Ticketek fans were still angered and frustrated by the issues.

‘Thanks for wasting everyones (sic) time today. To say on the ABC post that most got tickets is just not true. My husband was on from 9am for Swans tickets & he was timed out every time until the site crashed,’ one user wrote.

‘You have had long enough to fix this issue we’ve all been patient & (sic) a lot of people wasting their day waiting for you to get this sorted out,’ another added. 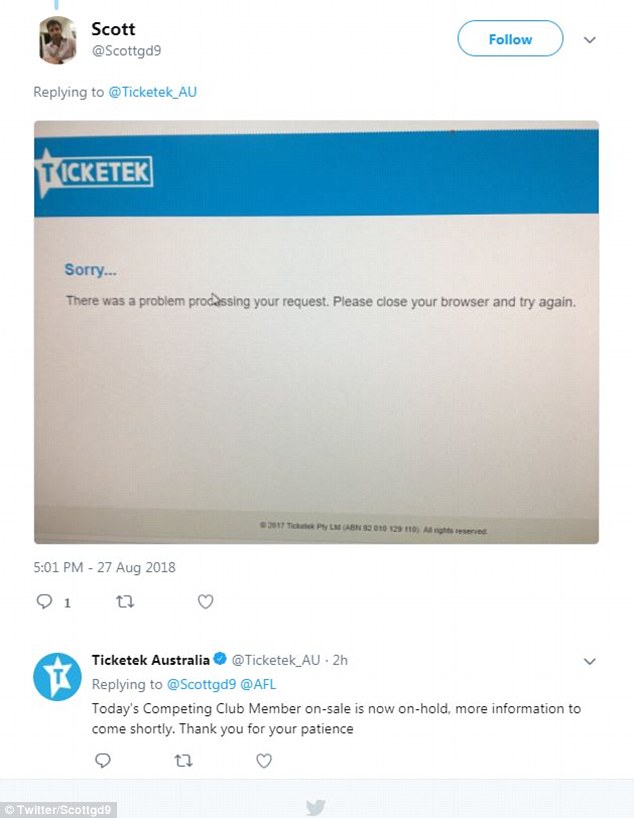 Meanwhile on Twitter Ticketek had a standard reply to a large majority of customers queries and complaints.

The first game of the finals is scheduled for Thursday at the MCG at 7.20pm between Richmond and Hawthorn.

Ticketek Australia has been providing tickets to sporting and other entertainment events to Australians for 35 years and they sell up to 23 million tickets per year, to at least 20,000 events.