The delay announced late Monday allows the justices to decide how to handle the House subpoena and a similar demand from the Manhattan district attorney at the same time.

The justices are giving Trump until December 5 to file a full appeal of a lower court ruling calling for his accountants to turn over the records.

The president’s lawyers are certain to comply, and the court’s decision about whether to take up the case is expected by mid-January.

The House Committee on Oversight and Reform had argued that Trump’s case was too weak to earn a delay from the court.

There was no noted dissent from the court’s unsigned order.

Legal briefs have been filed by both sides in that case.

The justices now should be able to say at the same time whether they will take up the cases and decide them by late June.

If they opt to reject Trump’s appeals, the House and Vance would be able to enforce their subpoenas immediately.

Mazars has said it would comply with any legal obligation. 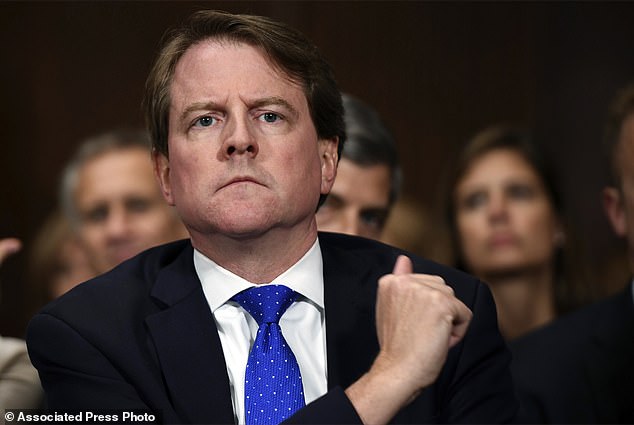 The House’s quest for the records is not part of the ongoing impeachment inquiry, but the court’s action probably means Democrats will not have the records before an expected vote on impeachment by year’s end.

The news regarding Trump’s financial records comes as a judge ruled on Monday that former White House counsel Don McGahn must comply with a congressional subpoena as lawmakers pursue the impeachment inquiry, rejecting the administration’s assertion of immunity for such officials by declaring ‘no one is above the law’.

But by rejecting Trump’s key legal argument for defying congressional subpoenas it could give other former and current officials, like his former national security adviser John Bolton, a legal basis for cooperating with the Democratic-led House impeachment inquiry against the Republican president, legal experts said.

In an important case about presidential powers, the judge rejected the Trump administration’s legal claim that current and former senior White House officials cannot be compelled to testify before Congress.

McGahn, who left his post in October 2018, last May defied a subpoena from the House Judiciary Committee to testify about Trump’s efforts to impede the now-completed special counsel investigation into Russian interference in the 2016 US election.

‘Executive branch officials are not absolutely immune from compulsory congressional process – no matter how many times the executive branch has asserted as much over the years – even if the president expressly directs such officials’ noncompliance,’ Jackson wrote, adding that ‘this result is unavoidable as a matter of basic constitutional law’.

The subpoena was issued months before the House opened an impeachment inquiry in September into Trump’s actions concerning Ukraine. The committee sued McGahn in August to try to enforce the subpoena.

The judge also wrote that ‘compulsory appearance by dint of a subpoena is a legal construct, not a political one, and per the Constitution, no one is above the law’.

The judge said she was not addressing the separate issue of whether McGahn could withhold information by citing executive privilege, which is intended to keep confidential the nature of discussions between a president and close aides.

The Trump administration has refused to cooperate with the impeachment inquiry as well as other Democratic-led investigations and has directed current and former officials to defy subpoenas for documents and testimony.

There are other legal fights over subpoenas seeking Trump tax and financial records.

‘We will appeal,’ a Justice Department spokeswoman said by email.

‘Don McGahn will comply with Judge Jackson’s decision unless it is stayed pending appeal,’ said William Burck, a lawyer for McGahn, in a statement.