Supreme Court mulls whether to hear Trump’s appeal on DACA

The US Supreme Court on Friday discussed in private how to handle President Donald Trump’s appeal of a judge’s decision blocking his plan to end protections for young illegal immigrants dubbed ‘Dreamers,’ and the nine justices could announce as early as Tuesday whether they will take up the case.

Trump’s administration is appealing San Francisco-based US District Judge William Alsup’s January 9 ruling that halted the president’s order to end the Deferred Action for Childhood Arrivals (DACA) program, which protects from deportation young adults who came into country illegally as children and gives them work permits.

US lawmakers have been working to resolve the fate of the hundreds of thousands of young adults, mostly Hispanics, protected by the program, but legislation that would have done so failed in the Senate on Thursday.

DACA was implemented in 2012 by Democratic former President Barack Obama. 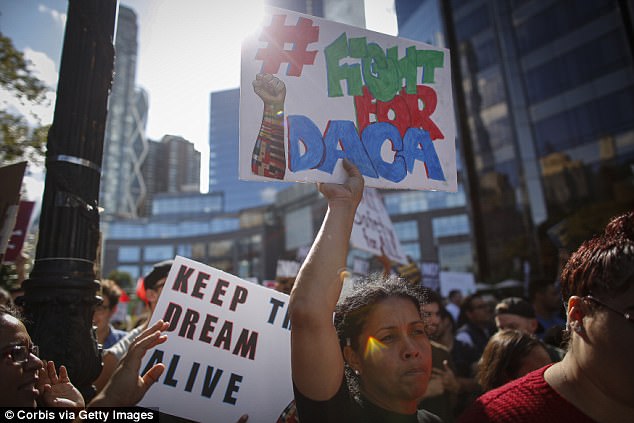 Trump’s administration is appealing a ruling that halted an order to end the DACA program, which protects from deportation young adults who came into country illegally as children and gives them work permits. A pro-DACA protest in New York is seen above in September

If the justices agree to hear the appeal by the Republican president, they likely would not rule on the case until late June.

If they turn away the appeal, Alsup’s nationwide injunction blocking Trump’s plan to rescind DACA would remain in effect while legal challenges to the president’s action proceed.

Alsup’s injunction was issued in a lawsuit led by California’s Democratic attorney general.

Under Trump’s order, DACA would begin phasing out on March 5.

If Alsup’s decision remains in place, DACA beneficiaries would be able to reapply for protections past that deadline, although the administration is not processing new applications.

On Tuesday, a second US judge issued a similar injunction ordering the Trump administration to keep DACA in place.

Protecting the Dreamers is of paramount importance to Democrats and some Republicans. 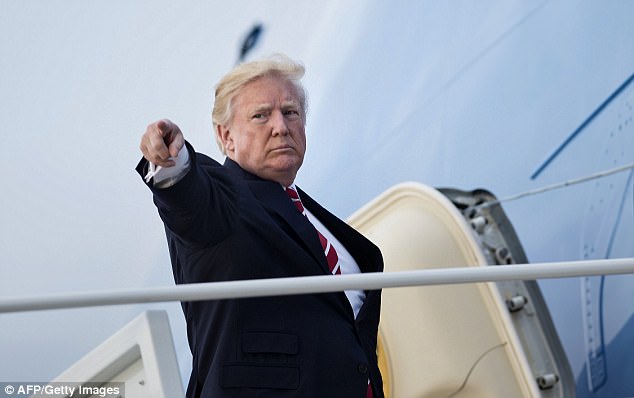 If the Supreme Court justices agree to hear the appeal by the Republican president, they likely would not rule on the case until late June. President Trump is seen above boarding Air Force One at Andrews Air Force Base on October 7, 2017

Trump himself has backed legislation that would give them a path to citizenship but also would curtail legal immigration.

In a Twitter post on Friday, Trump sought to blame Democrats for the problems created by his order, writing, ‘Cannot believe how BADLY DACA recipients have been treated by the Democrats…totally abandoned! Republicans are still working hard.’

Under DACA, about 700,000 young adults receive protections for two-year periods, after which they must reapply.

An estimated 1.8 million people are eligible for the program.

His administration argued that Obama exceeded his powers under the Constitution when he bypassed Congress and created DACA.