The hunky surfer whose images were stolen and photoshopped into war zones by an Instagram fraudster has revealed it’s not the first time he’s been a target of online identity theft.

British surf blogger Max Hepworth-Povey had his photos stolen and used by ‘Eduardo Martins’, a fake photographer who claimed to have visited everywhere from the Gaza Strip to Iraq and even witnessed ISIS fight in Syria.

His photos of war zones and terror ravaged cities led to double-page spreads in top international magazines and more than 130,000 followers on Instagram.

But it was all a lie.

Mr Hepworth-Povey told Daily Mail Australia his first reaction when he saw his face photoshopped into war zones was ‘what the f**k?’.

Victim: Mr Hepworth-Povey was unaware his original images (pictured) were being taken until this week 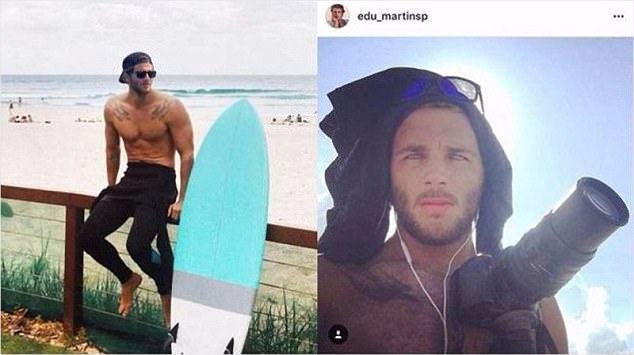 Thief: The fake photographer would steal photos from the Instagram page of surf instructor Max Hepworth-Povey (pictured) and claim them as his own from his travels

‘Where did this dude get these pics from. My initial thought was f**k, I haven’t seen those photos in years.

‘This guy has gone to so much to do all this. I haven’t had a chance to absorb everything.

‘It’s a very, very strange way to spend a lot of time.’

The British surfer works for a travel company and spoke to Daily Mail Australia from Europe, where he is leading a tour through France and Spain.

He revealed it is not the first time his image has been procured for devious deeds.

Mr Hepworth-Povey said he was messaged by someone claiming to work for surf brand Quiksilver who wanted to interview him for a position at the company about two years ago. 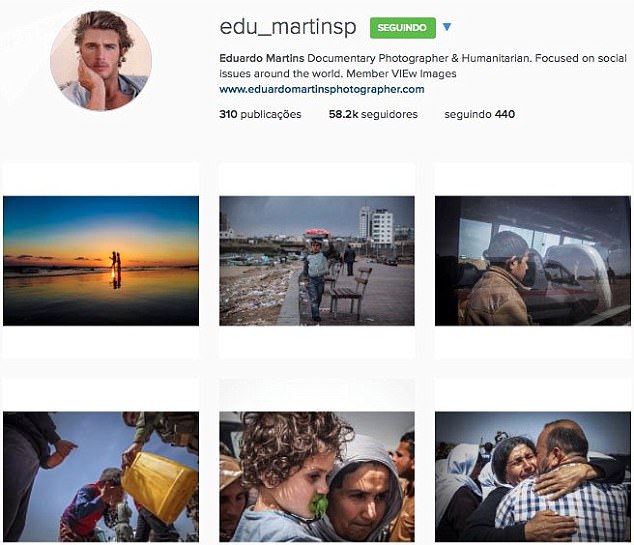 Conman: A wannabe photographer calling himself ‘Eduardo Martins’ has been caught stealing the pictures of professional war photographers (pictured) and claiming them as his own

‘I thought it was weird that they reached out to a very, very average surfer.

‘They asked to do a Skype interview… they said their camera wasn’t working and then next thing a fake me had come up on Facebook.

‘This guy called himself Bruno… Me and a few of my friends reported it.’

‘I hate the whole social media thing but I understand that it’s a necessary evil. The whole Facebook thing… it’s all bulls**t.’

Mr Hepworth-Povey said one upside of the photo-stealing scandal has been ‘being referred to as a handsome 34-year-old’.

He isn’t holding much hope of tracking ‘Eduardo Martins’ down, with the fraudster reportedly hiding out in a van driving around Australia.

‘How the hell are you going to find who this guy is?’ 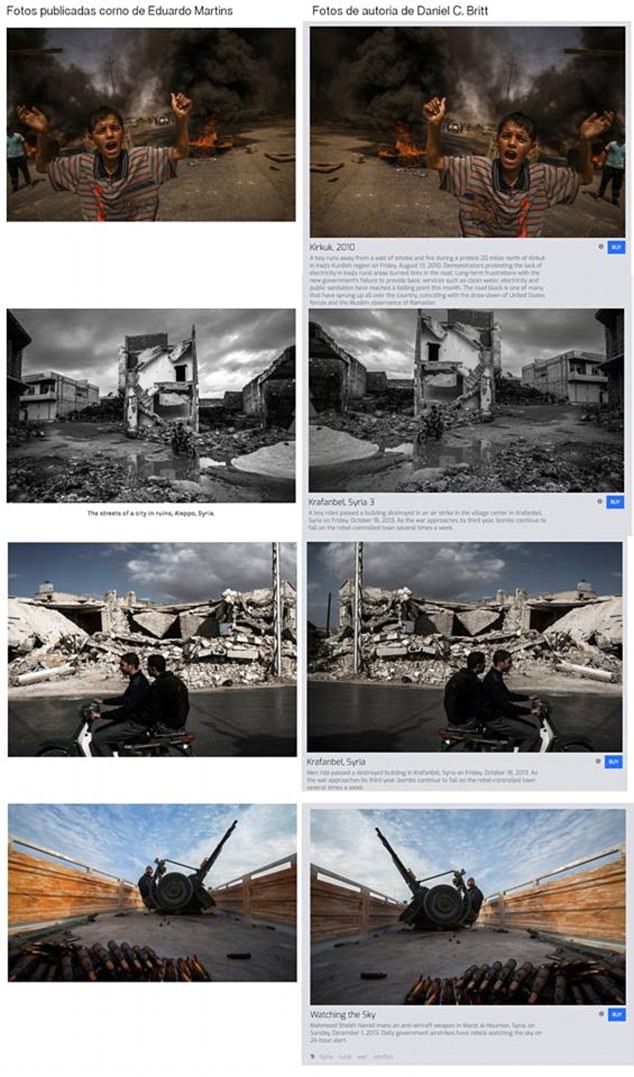 Real vs fake: On the right are the real original photos taken by American photographer Daniel Britt, while on the left are the fake images which have been flipped 180 degrees on Photoshop

‘Martins’ photos of war zones and terror ravaged cities led to double-page spreads in top international magazines and more than 130,000 followers on Instagram.

Claiming to be a professional photographer from Sao Paulo, Brazil, for years he took the images of others before photoshopping them to look marginally different.

The supposed 32-year-old – whose identity has never been verified – claimed to have visited everywhere from the Gaza Strip to Iraq and even witnessed ISIS fight in Syria.

Yet after years of claiming to be a United Nations photographer and fooling the BBC, Al Jazeera, the Wall Street Journal and even Getty Images, Mr Martins was caught out last month, leading the conman to reportedly go into hiding somewhere in Australia.

After taking images from other photojournalists the mystery thief on occasion added a photo from the Instagram of British surf blogger Max Hepworth-Povey.

By photoshopping Mr Hepworth-Povey’s head into war scenes, the unknown conman made it look as though he was in the middle of raging battles.

Also sharing casual photos of Mr Hepworth-Povey surfing, the fraudster was able to make it look to his 120,000 Instagram followers like he had a life outside of war.

This all went on with the real surf fanatic completely unaware, until being contacted by concerned photographers who joined the dots together this week.

‘When my friend showed me the photos first of all I thought it was a joke, some a***hole (messing) with me,’ Mr Hepworth-Povey told BBC Brazil.

‘But actually, my photos were stolen, it’s crazy that some random guy decided to use my image among so many options across internet.

‘I work very far from war zones, with surfing trips. All my pictures have always been taken in that context. 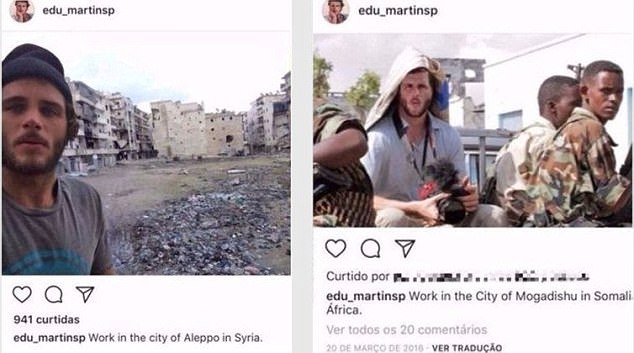 Photoshop: The mystery photo thief would cut selfies or headshots from Mr Hepworth-Povey’s page before pasting them into war zones (pictured)

‘I was relaxing, sipping wine, when a friend contacted me saying that they had stolen my identity in a kind of internet catch.’

Not only did the random thief boost his social media presence and profit from the work of others, but he also fed the media a tale of his battle against the odds.

He told how he had beaten cancer at the age of 25, before combining his love of surfing with travelling around the world photographing war zones for work.

However his downfall came at the hands of a social media friend and blogger who was able to confirm to suspicious outlets his story may in fact be completely fake. 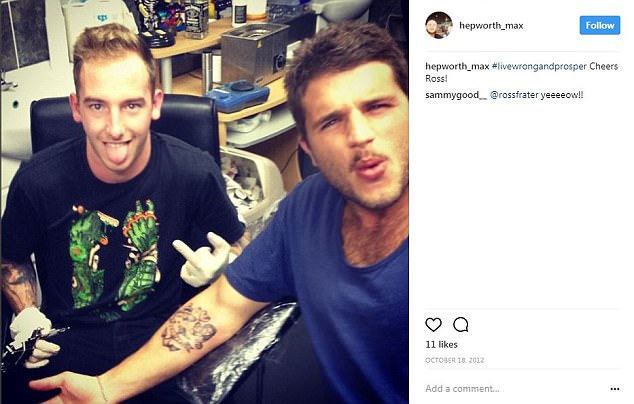 Original: Images such as this proved perfect for the mystery photo thief to claim as his own

Fernando Costa Netto, who runs surfing site Waves, told how he had spoken to Mr Martins just days before the conman went to ground, claiming to be in Australia.

‘The last two times we’ve been talking about WhatsApp, he told me that he was exhausted, emotionally shaken by the months in Mosul, but that he was going to Raqqa, Syria, for another on,’ Mr Netto wrote.

But after being contacted by suspicious media he got back in touch with the fake photgrapher to warn him, before he quickly shut down his online presence.

‘I’m in Australia. I made the decision to spend a year a van. I’ll cut everything, including the internet,’ Mr Martins said.