‘I suggest we wage war on bluebottles before it’s too late’: Surfer shares terrifying footage of a monster jellyfish the size of his board

A surfer has shared terrifying footage of an enormous jellyfish washed ashore in the aftermath of Cyclone Oma.

The clip, uploaded to Facebook on Sunday, quickly went viral on social media as users debated whether the blue bottle was real or not.

The clip begins by filming the blue bottle’s long tentacles, which sit at the bottom of the two-and-a-half metre board.

Viewers learn shortly after how large the creature actually is when the camera finally reaches its head – which sits at the nose of the board.

Users were shocked to see the size of the monster jellyfish and over 100 comments have been made.

‘Burn the ocean,’ one person said.

‘Never seen one that big. I suggest we wage war on the bluebottles before it becomes too late,’ a person commented.

Another user said: ‘As a kid my friends and I would throw blue bottles at each other while swimming. I’m pretty sure one of us would be dead if we ever found [one] this big.’

Others debated whether the jellyfish was real or not.

‘Is this real? I don’t want to get in the ocean again if so,’ wrote one woman.

A surfer has shared footage of an enormous jellyfish the size of his 8 foot surfboard on Reddit. Users were left stunned by its size

Blue bottle jellyfish are commonly found on Australian beaches during the summer months and their tentacles are usually between two to 15 cm long but can grow up to 10 metres long.

They use them as their main defence as they carry venom to attack when needed.

Blue bottles usually float in open oceans waters but are swept on to shores during strong winds.

Surf Life Saving Queensland has found that more than 38,000 people were stung by bluebottles in Queensland over the summer. 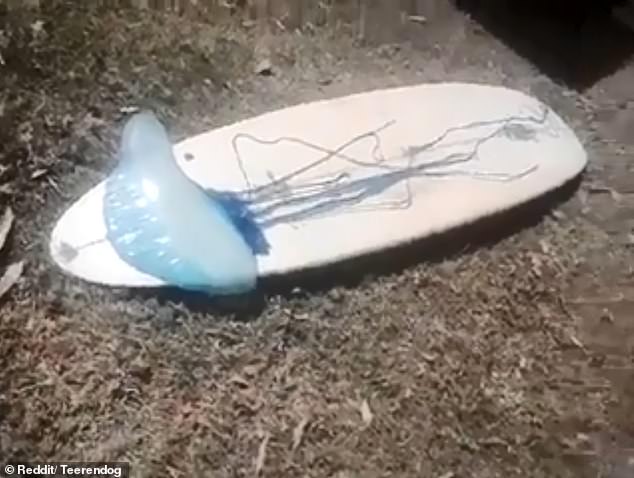