The reopening of some of Sydney’s beaches has been praised by locals, many of who point the finger of blame for their initial closure at the thousands who flouted COVID-19 advice to pack out Bondi Beach last month.

Coogee, Clovelly, Maroubra and Malabar beaches were all reopened on Monday, three weeks after Randwick City Council made the decision to close them to the public due to strict coronavirus social distancing rules.

The ban followed a similar closure at nearby Bondi just days earlier, where locals and backpackers had flocked to the water on an unseasonably hot 34C day – only for a number of people to be later confirmed to have COVID-19.

Waverley Council – of which Bondi is the centrepiece – has been one of the worst areas for the virus in Australia.

But with the number of coronavirus cases in New South Wales continuing to fall, beaches were reopened to the public on Monday, but with signs clearly spelling out tho those who visited that they were open for ‘exercise only’.

Swimmers were able to return to beaches within Randwick City Council, in Sydney’s eastern suburbs, on Monday for the first time in three weeks 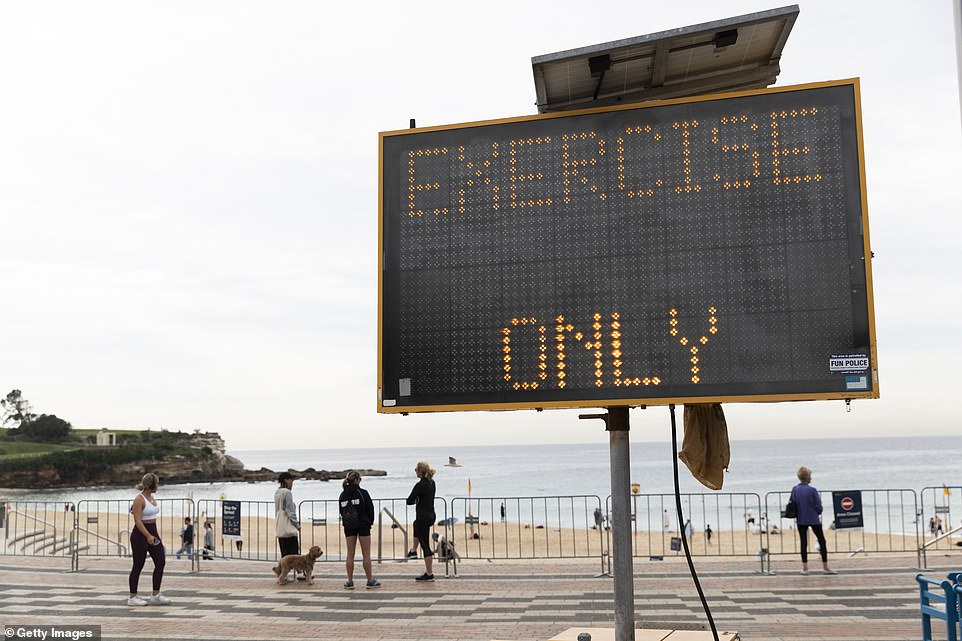 The  recent drop in COVID-19 cases saw the beaches reopened, but signs clearly spelled out to those in the area they were open for ‘exercise only’ 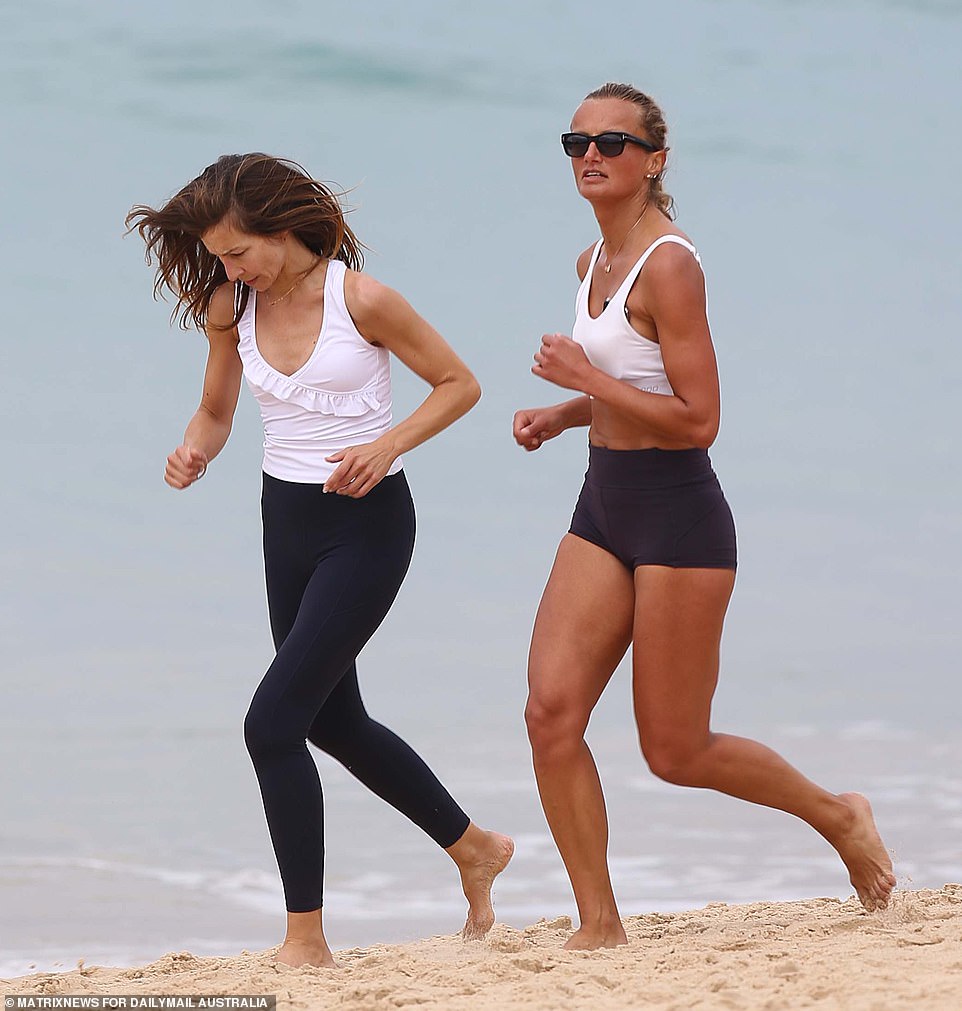 The decision to close Coogee, Clovelly, Maroubra and Malabar beaches was made in late-March due to the coronavirus social distancing rules 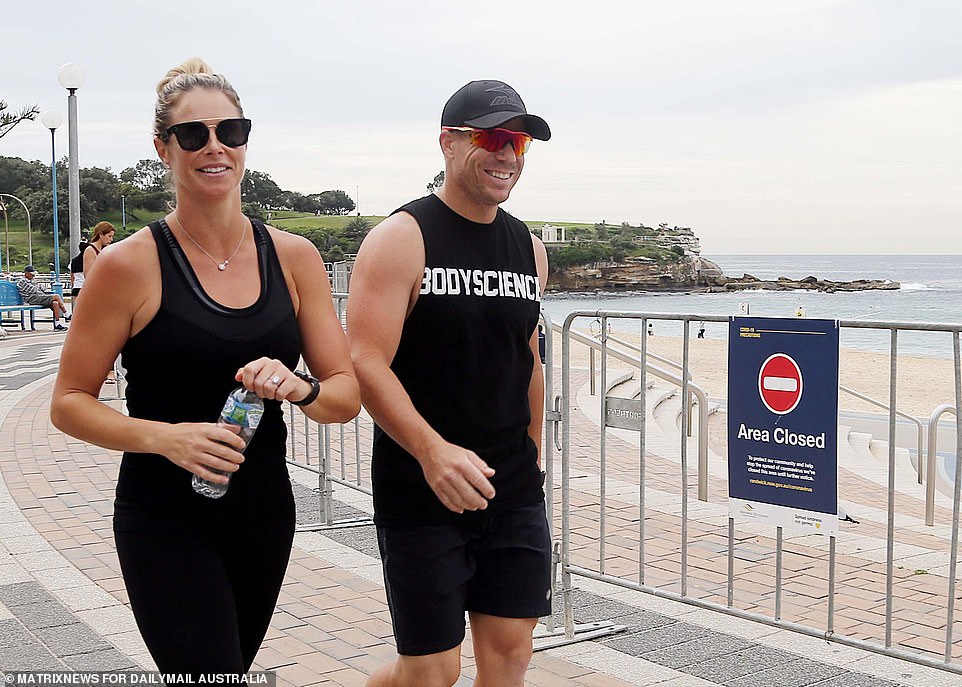 The past few weeks have been particularly difficult for swimmers like Tony Sloman, who hits the water daily – even throughout winter.

Mr Sloman, 57, who believes it is a good time to reopen beaches, as society is aware of the importance of social distancing and the cooler weather will mean fairweather swimmers less inclined to head to the beach.

‘It’s been about four weeks and for someone like me, that’s a long time, I swim almost everyday and I swim right throughout the year,’ he said.

‘Without sounding too political, I think if we look back to what happened at Bondi… I guess that caused the closure of all the other beaches.

‘For many like myself, my health – not just my physical health but mental health – has relied on being in the water.

‘When they shut the beaches you’d go along the coastal walks and they were packed with people walking or a jog, so to a swimmer there didn’t seem to be much logic in not being able to swim in ocean water for exercise.

‘If you look around, people are respecting it. And I think they realise that if you don’t respect it, and respect each other, it will be taken away again.’

The strict ban meant anyone who climbed over the temporary fencing was at risk of a $1000 fine – no matter how briefly they swam or surfed in the ocean. 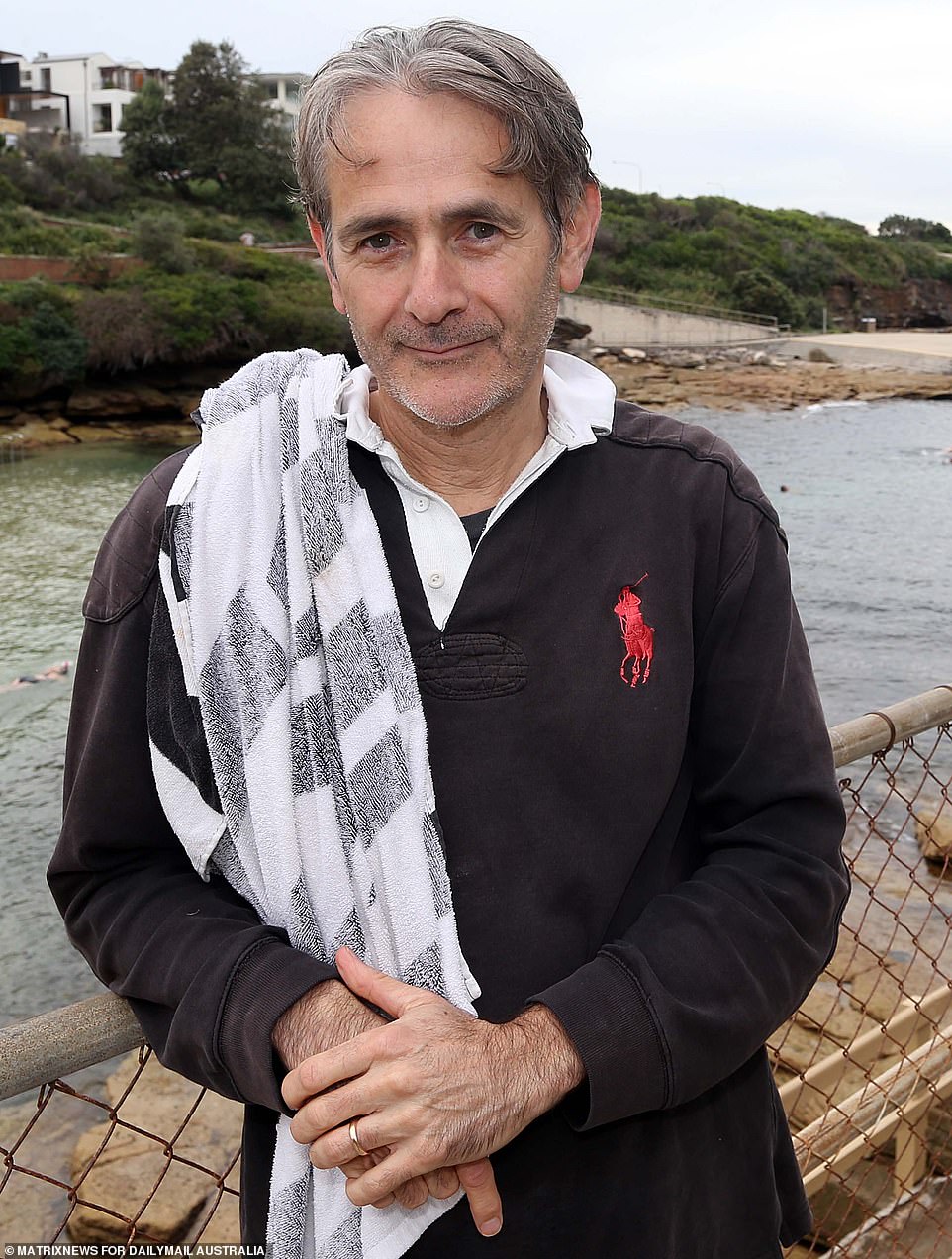 Tony Sloman, who hits the water daily – even throughout winter – said he understood the restrict people’s activities, but was unsure why oceans were closed to swimmers while parks and walkways remained open for exercise like walking and running 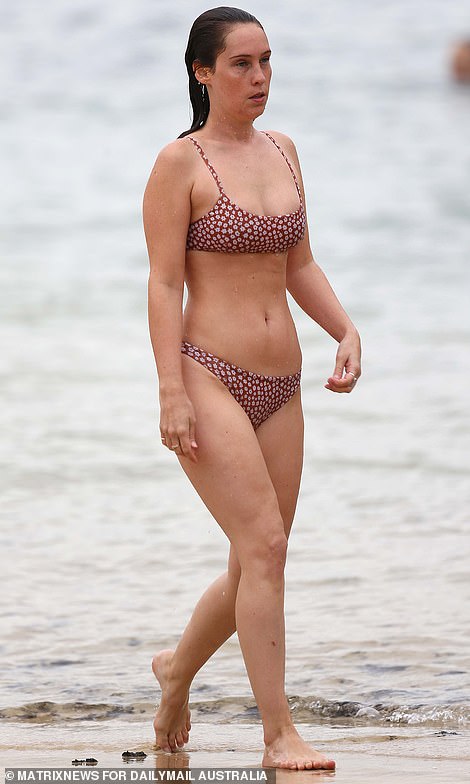 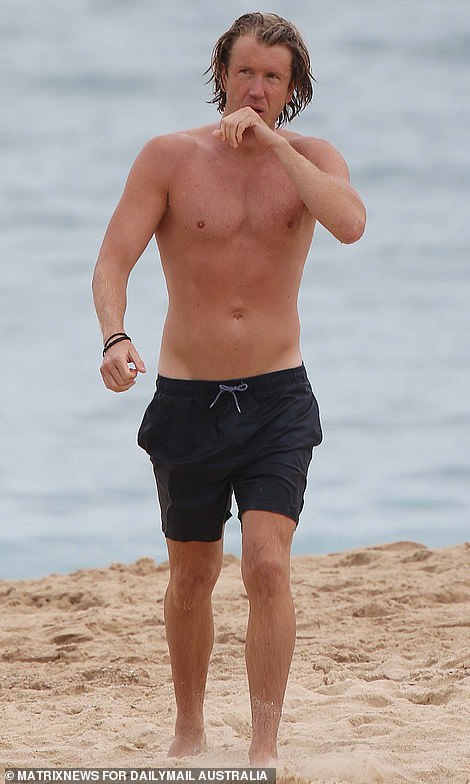 Swimmers were regularly told by lifeguards over the personal address system that they could no sunbake or lie on the beach, and were required to promptly get in and out of the water 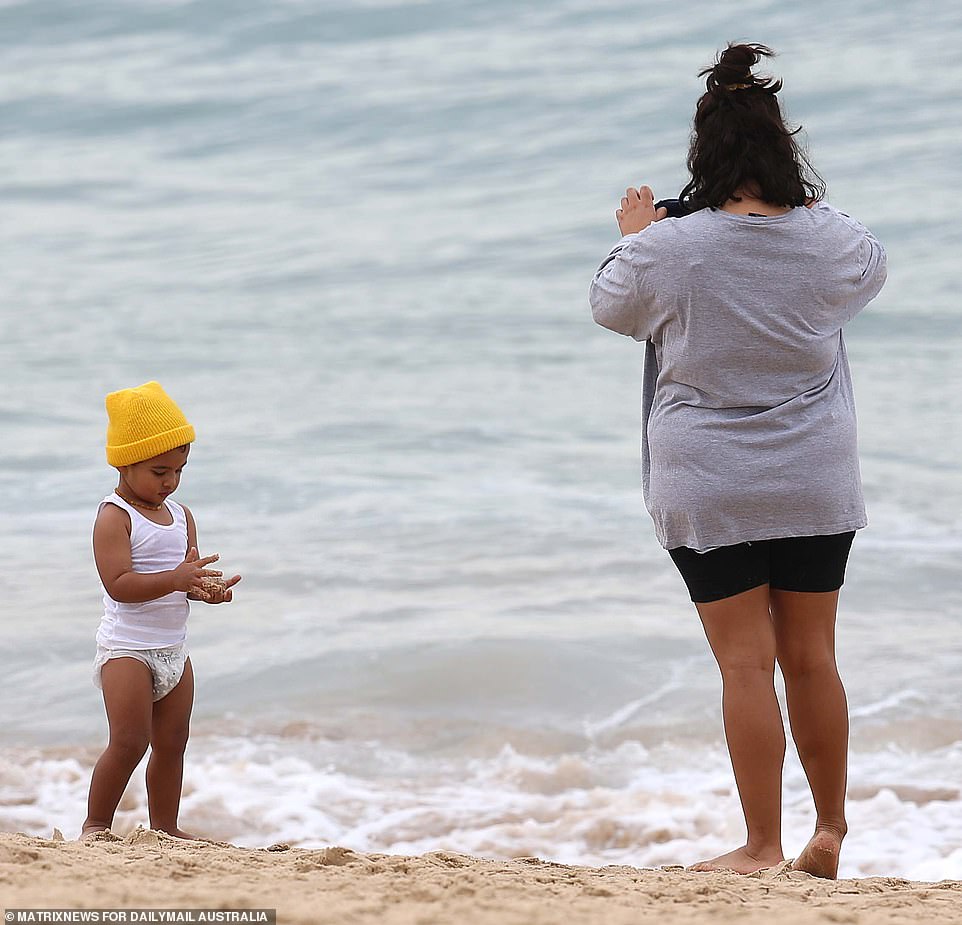 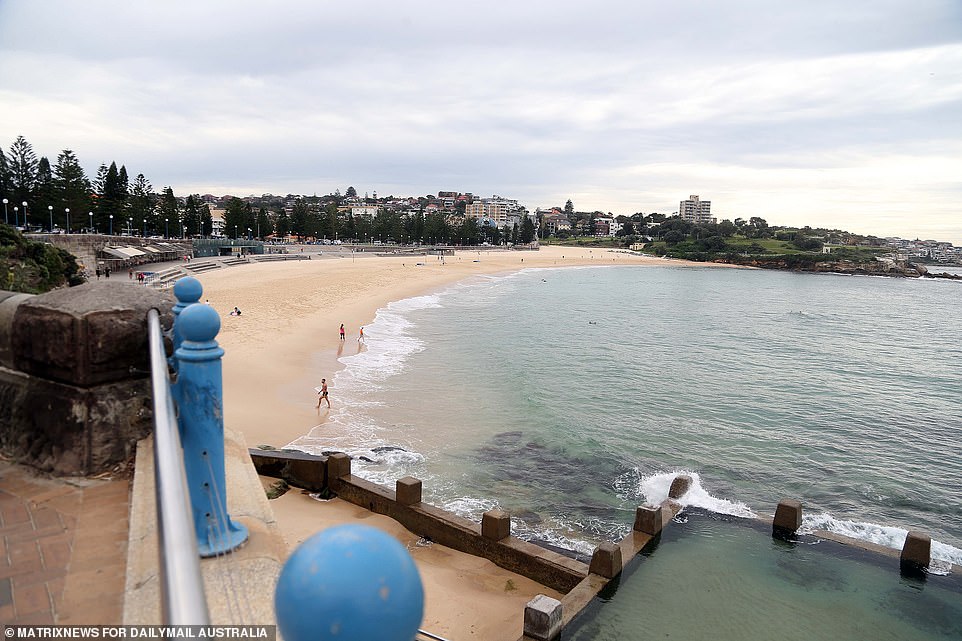 Overcast skies meant Coogee Beach was largely quiet on Monday, with those brave enough to venture into the water saying it was cold

It has also meant two-year-old Moses Epa Iosepha has been unable to run around and chase seagulls in the sand.

His parents Alex and Cristal said they were thankful that the reopening of Coogee Beach meant they had another spot for him to run around, with most playgrounds across Australia closed.

‘I think it’s assume that it’s back open, obviously as long as people stay within the restrictions of what needs to be done,’ Mr Epa Isopeha said.

‘It’s good for people who exercise and enjoy the beach, but particularly for us with a young kid it’s great for him to be able to get outside and run around.

‘We live by the beach and he loves the water, so to have that taken away was a big loss for us.’

Local couple Orla Clarke and Gary O’Flynn admitted they had missed being able to duck down the beach for a quick dip, particularly after a few recent sunny days.

‘I’ve missed it so much, we just like getting in for a quick dip and so I think it’s a good thing that it’s open again, as long as people are just doing that,’ Ms Clarke said. 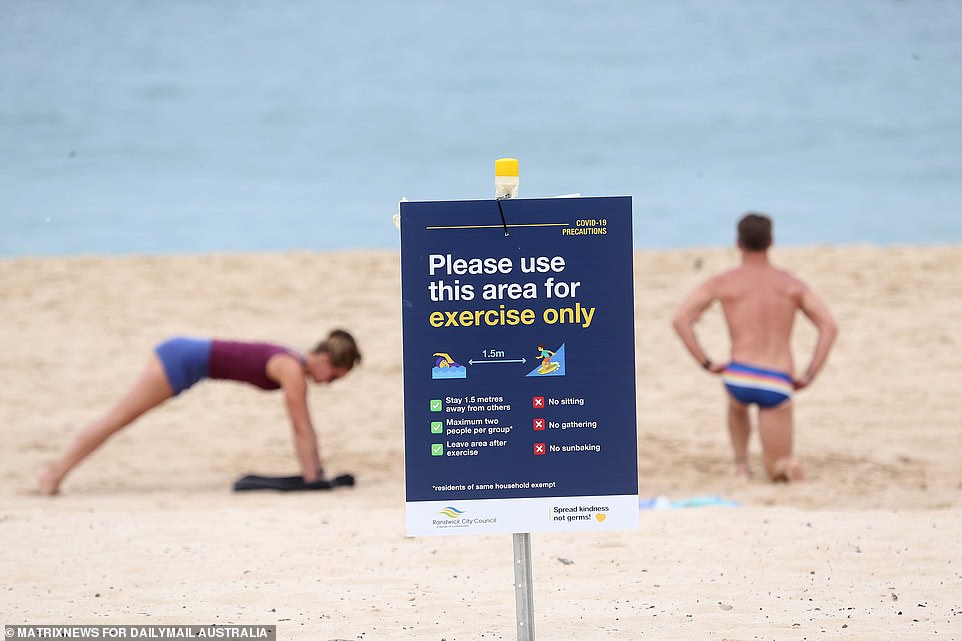 Sings were placed along the sand at Coogee Beach outlining the social distancing requirements, including that people gather in groups of no more than two and stay at least 1.5 metres apart at all times 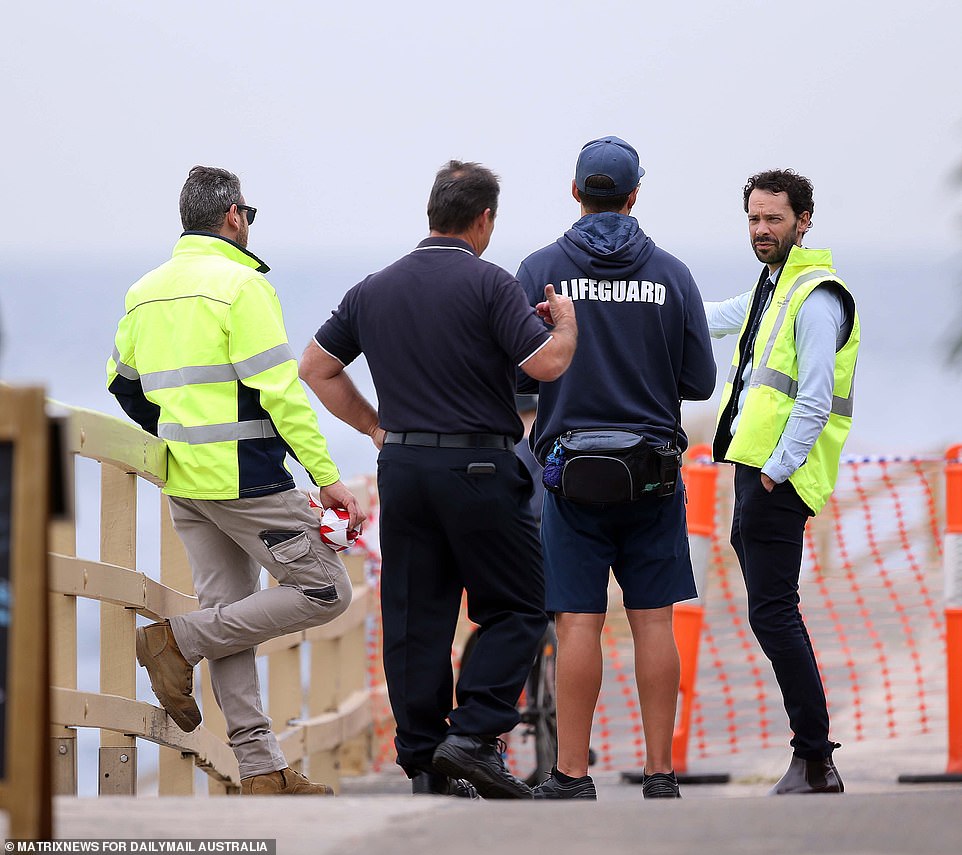 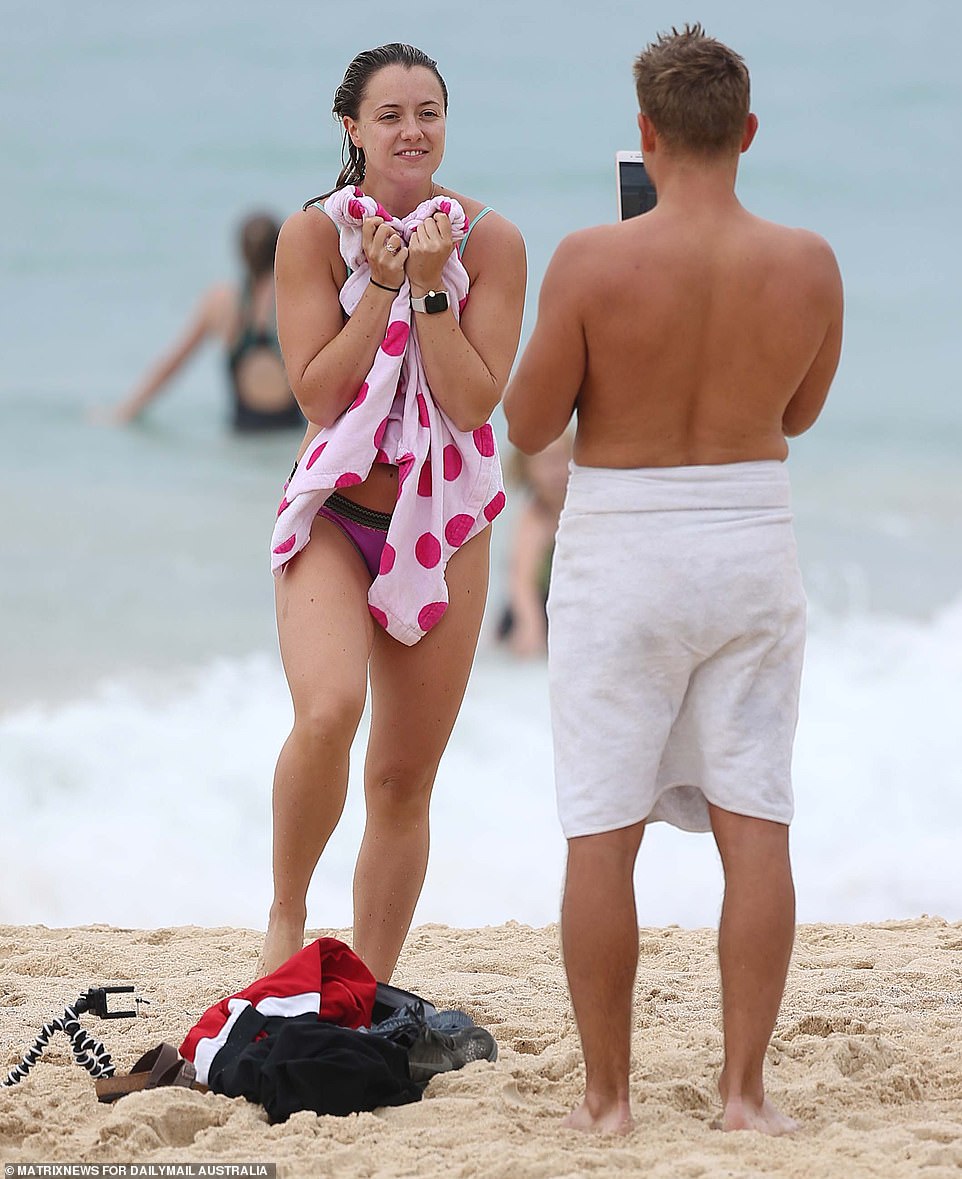 Local couple Orla Clarke and Gary O’Flynn admitted they had missed being able to duck down the beach for a quick dip, particularly after a few recent sunny days 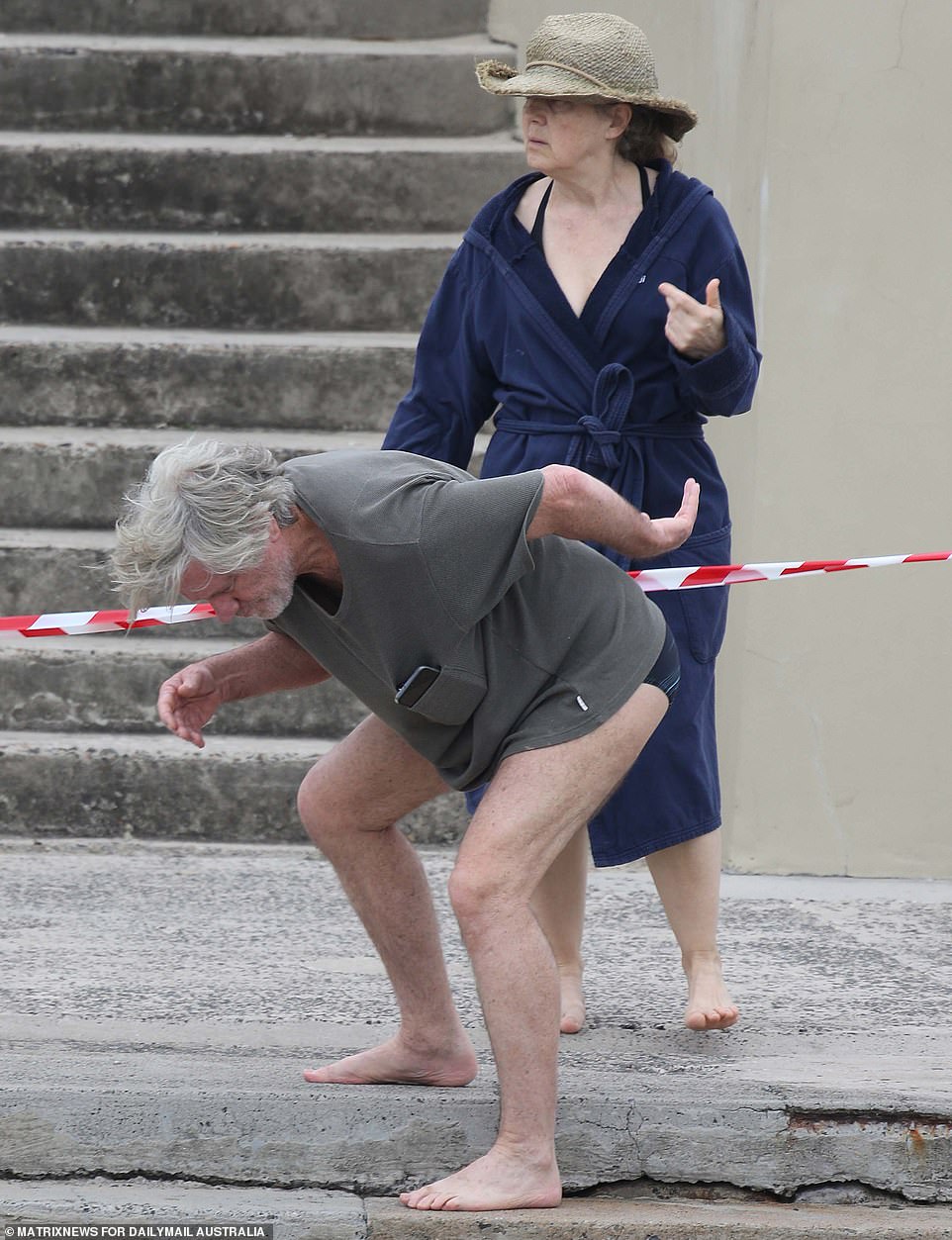 Despite the beach being reopened, many of the temporary fences and barriers remained in place at Clovelly – making it hard for some people to enter the water

‘Obviously people can’t be sunbaking or lying in the sun, but they have been making announcements about that regularly.’

‘It’s understandable that they closed it and I think with what happened in Bondi a few weeks ago, something had to be done, but it’s great it’s back open,’ Mr O’Flynn said.

Hundreds of keen surfers flocked to the waves early on Monday to make the most of the opportunity to get back in the water.

Many who would normally surf at nearby beaches in Bondi, Tamarama and Bronte, drove south to Randwick for the chance to catch a wave without risking a $1000 fine.

A proposal is currently before Waverley Council to reopen the beaches, however the area is still listed as a hotspot for coronavirus by NSW Health.

In the meantime fences remain in place to stop swimmers using the sand to safely enter the water.

It means that those who are desperate to surf have had to risk their lives diving into dangerously rough surf off the rocks at Mackenzies Beach. 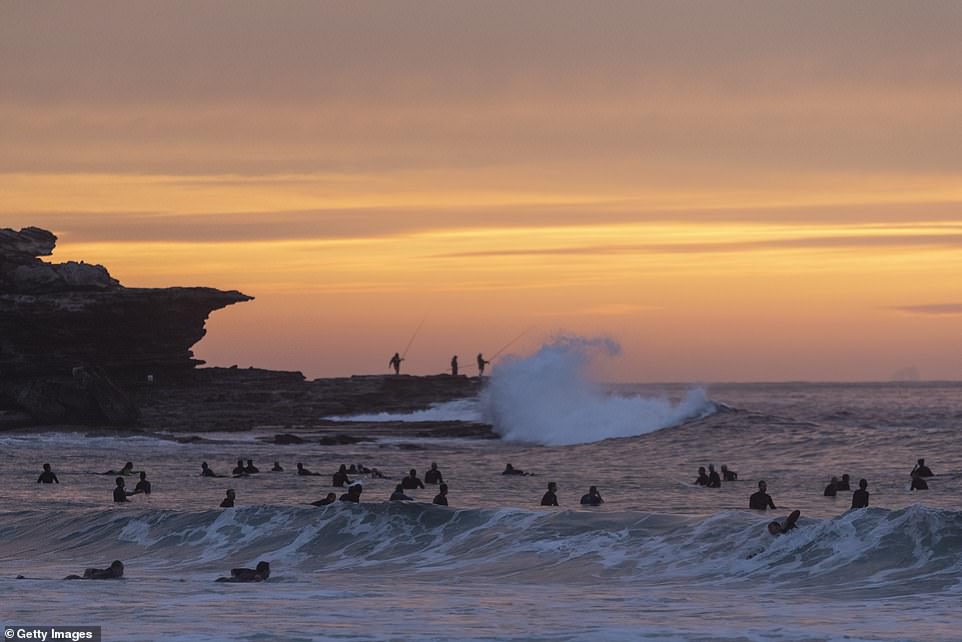 Hundreds of keen surfers flocked to the waves early on Monday morning (pictured: Surfers in Maroubra) 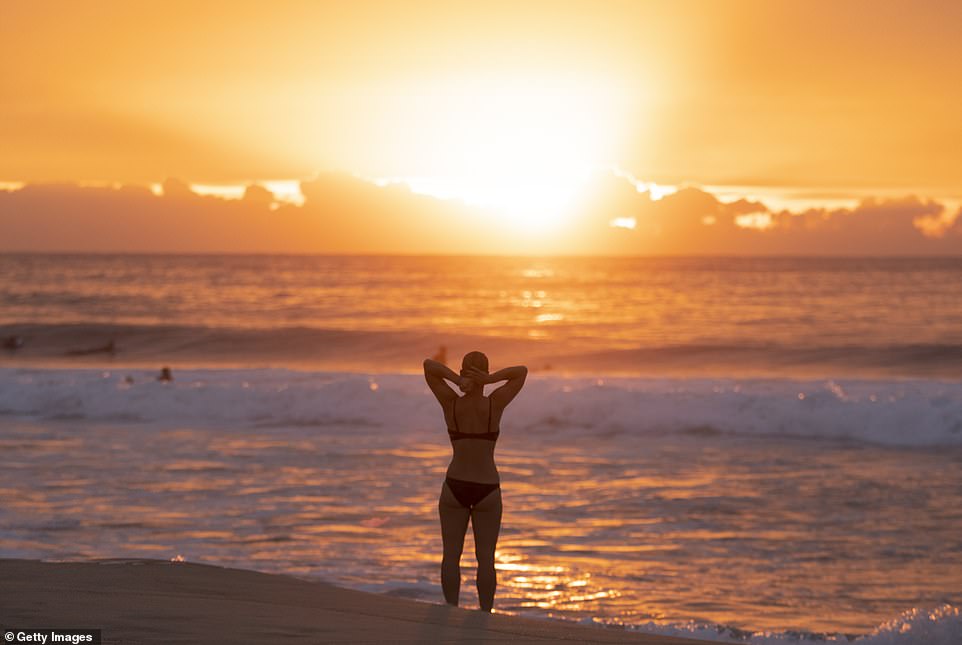 Residents are only allowed on the beach to exercise, sunbathing is banned (pictured: A swimmer drying off)

Sources told Daily Mail Australia there was little hope of surfers being able to dash across the sand to safely enter the waves in at least the next two weeks as Mayor Paula Masselos was ‘dead against it’.

In announcing the reopening of their beaches over the weekend, Randwick City Council mayor Danny Said he was aware of how important the water is to people’s health.

‘Living along the coast, I know how important our beaches are to the mental and physical health of so many in the community,’ Mr Said explained.

‘The past three weeks have been difficult as we’ve all had to make changes and sacrifices to our daily routines.

‘Our decision to close the beaches three weeks ago was not taken lightly and factored in the risk of coronavirus spread, particularly given the concentration of COVID-19 cases in the eastern suburbs area along with the popularity of our beaches. 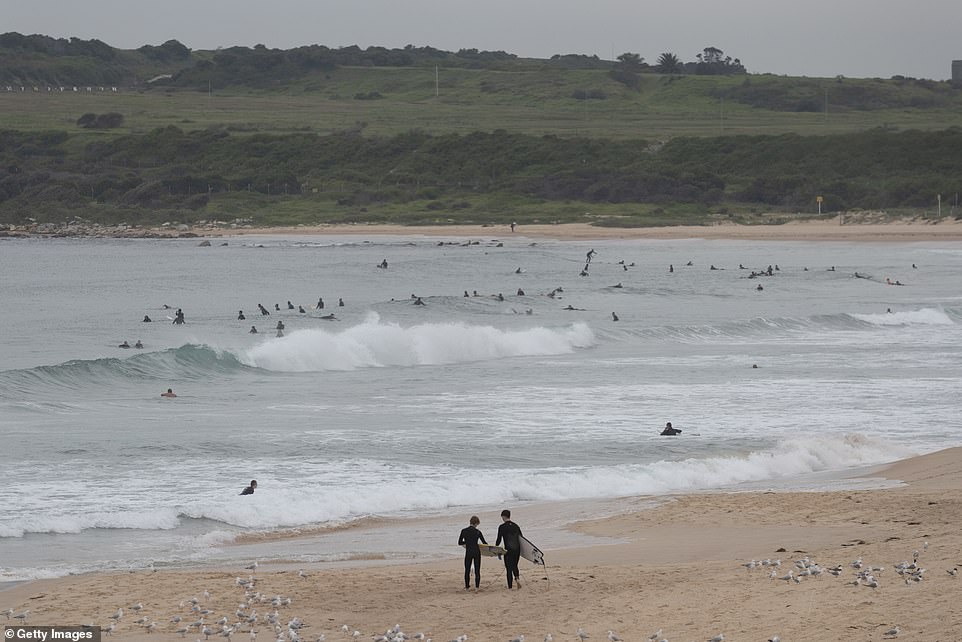 Surfers returned to Maroubra Beach beach on April 20 after the Randwick council lifted the ban. Only exercise is allowed at this stage 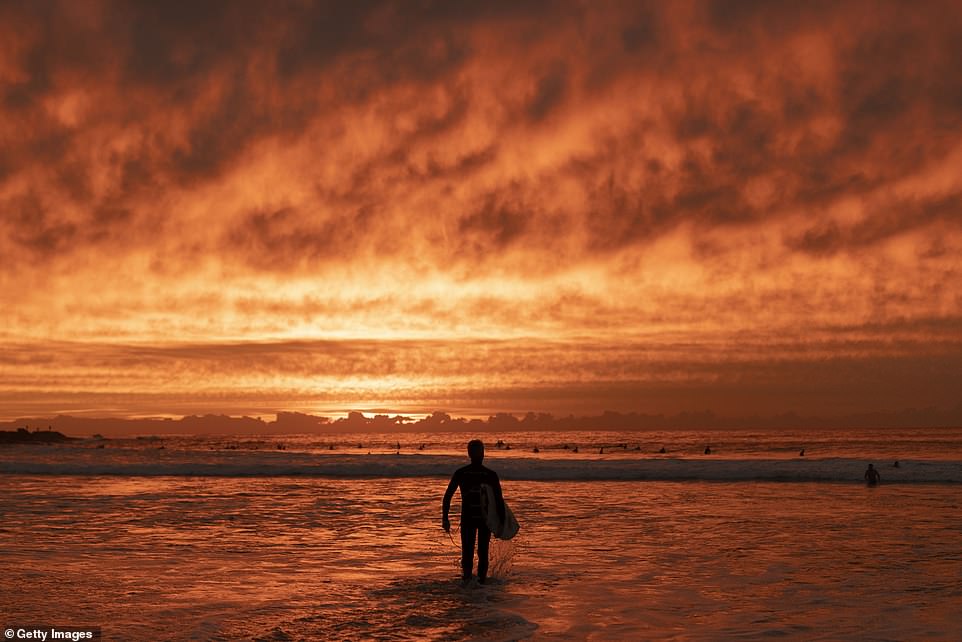 The beaches have been closed for three weeks to stop people from gathering in large groups amid the coronavirus pandemic (Pictured: A surfer paddles out at Maroubra beach on April 20)

‘Our decision was also based upon expected crowd numbers and people’s initial behaviour in relation to social distancing rules.

‘By not going to the beach, each of us has helped others in need. We’ve helped slow the spread and flatten the curve. I know it’s been tough, but I thank everybody for doing the right thing.’

NSW Police on Friday said they were ‘comfortable’ with the plan to open Bondi, but it is still mired in discussions with councillors, surf lifesaving, and the NSW Government.

‘Staff have developed proposals for managing our beach closures in a way that would allow for water access for ocean swimming and surfing,’ an email to councillors from general manager Ross McLeod read.

‘Consultation on these proposals took place with Easter Suburbs Police [on Friday] with a shared level of comfort being reached.

‘However, following media speculation on possible beach reopenings, [Health Minister Brad Hazzard] made some comments to media on the subject stating that he would like to be involved in discussions on any proposals before he could support them. 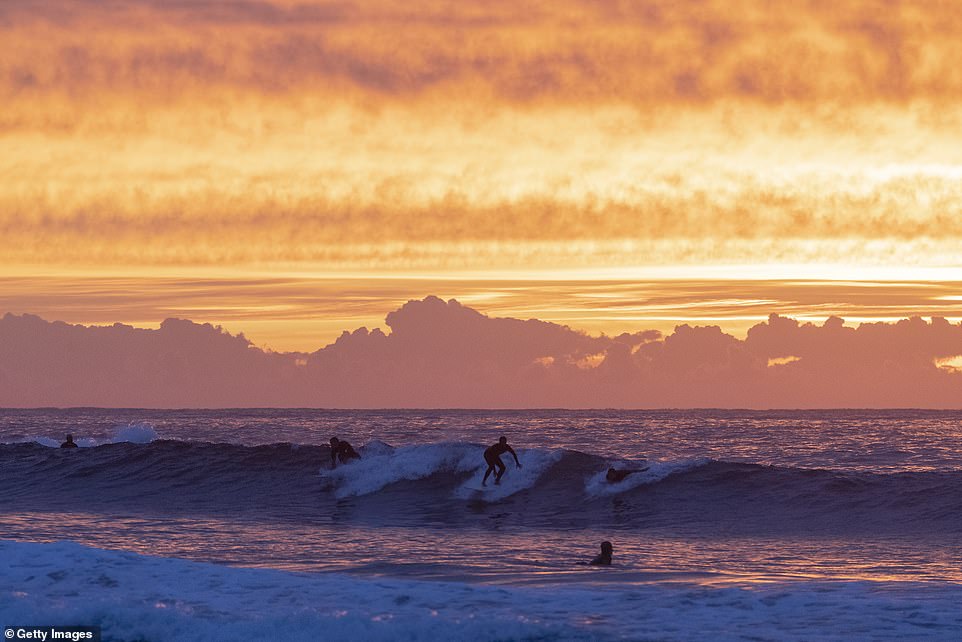 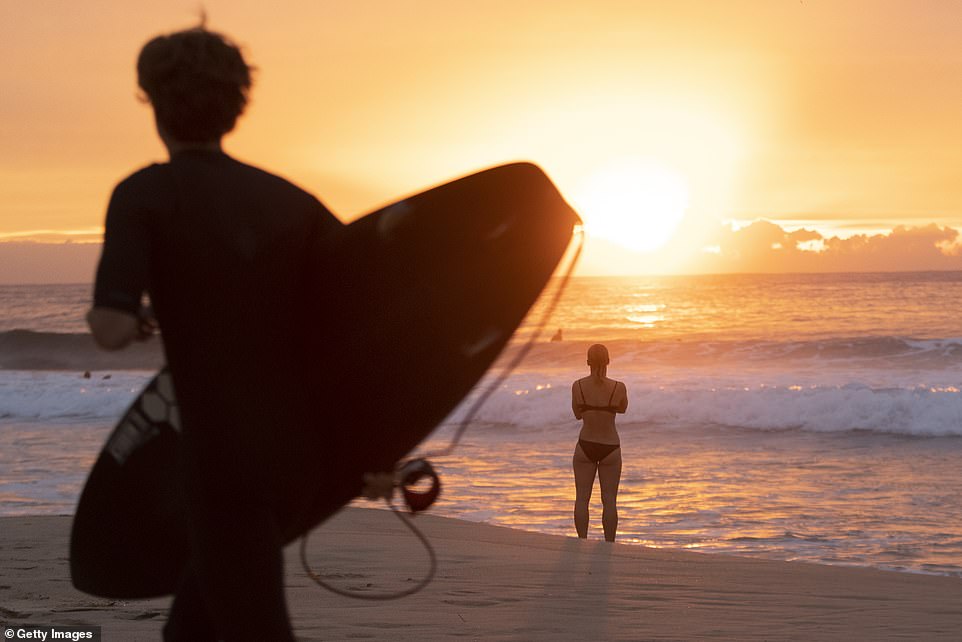 The beaches were reopened so residents can use them for exercise while adhering social distancing rules (Pictured: Swimmers and surfers return to Maroubra beach on April 20) 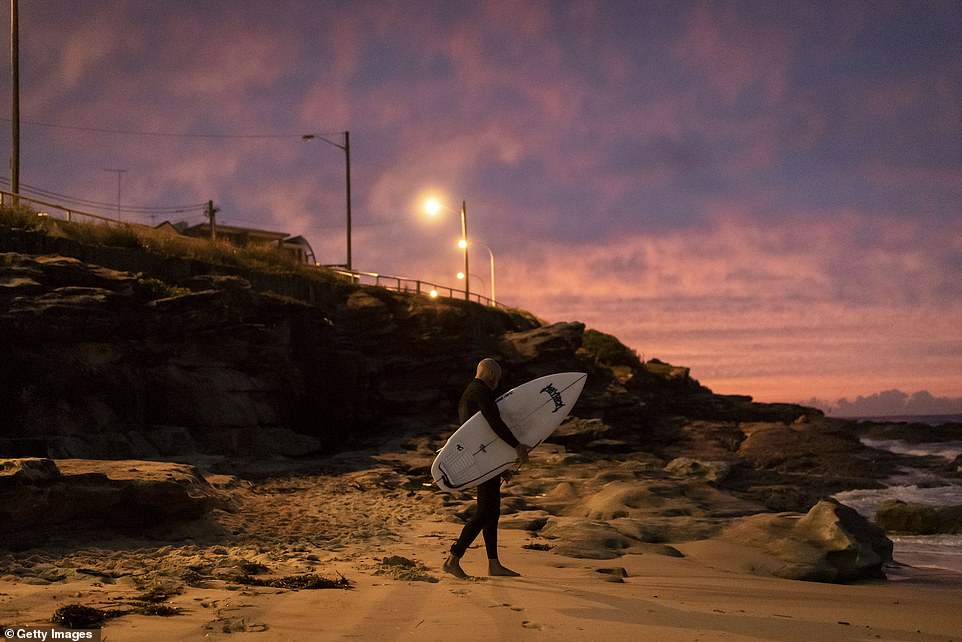 The sun wasn’t even up when surfers flocked to Maroubra Beach beach on Monday, April 20, after the ban was lifted

‘As a matter of good practice, we have decided to engage with the Minister on our proposals before we take any steps to implement them.

‘The Mayor has written to the Minister [on Friday] outlining our beach management proposals and the issues currently being encountered by Council and the police as a basis for discussion.

‘The Mayor is in contact with the Minister’s office and with stakeholders including the Surf Clubs and our neighboring councils.’

The proposal, the details of which are still being debated, would retain fencing and have staff manage the beaches to close access down rapidly should crowds form or people ignore the rules.

Mayor Said did not hold the same concerns about Randwick’s beaches, saying he was confident residents would be able to enjoy them for exercise while adhering social distancing rules.

‘I need to stress that our beaches are not open to general use and can only be accessed for exercise. Activities such as sitting on the sand, sun-baking or gathering in groups will not be permitted and Council staff and police will be enforcing these restrictions.

‘I urge everybody to do the right thing and practice social distancing while exercising so that we can maintain access for exercise purposes and get through this difficult period together,’ Mr Danny Said.

Ocean rock pools in Randwick City will remain closed until further notice as they are subject to a public health order to close. 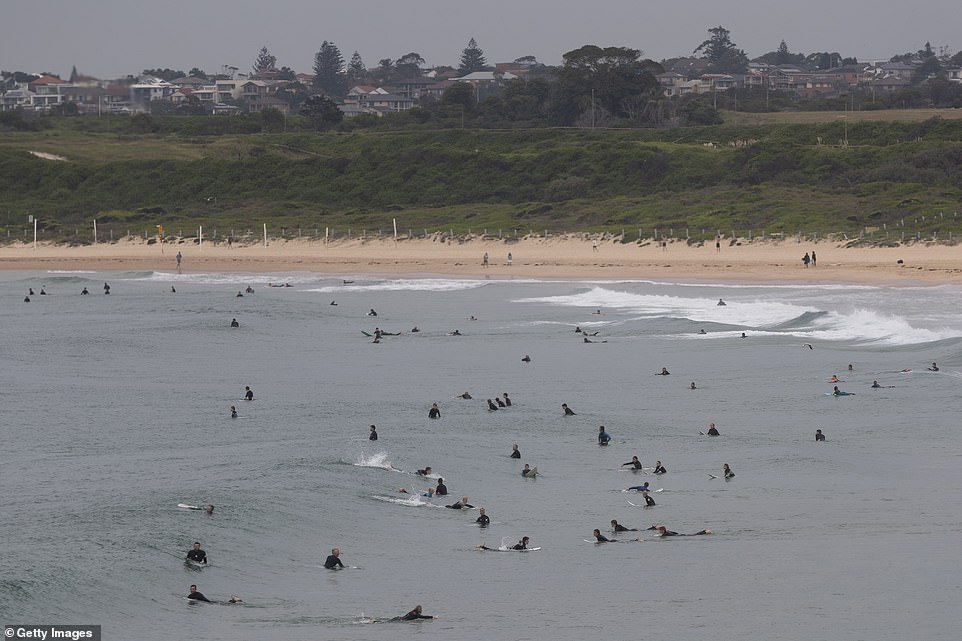 The waves were packed with surfers at Maroubra beach, they were all keen to get back in the water after being stuck on dry land for almost a month 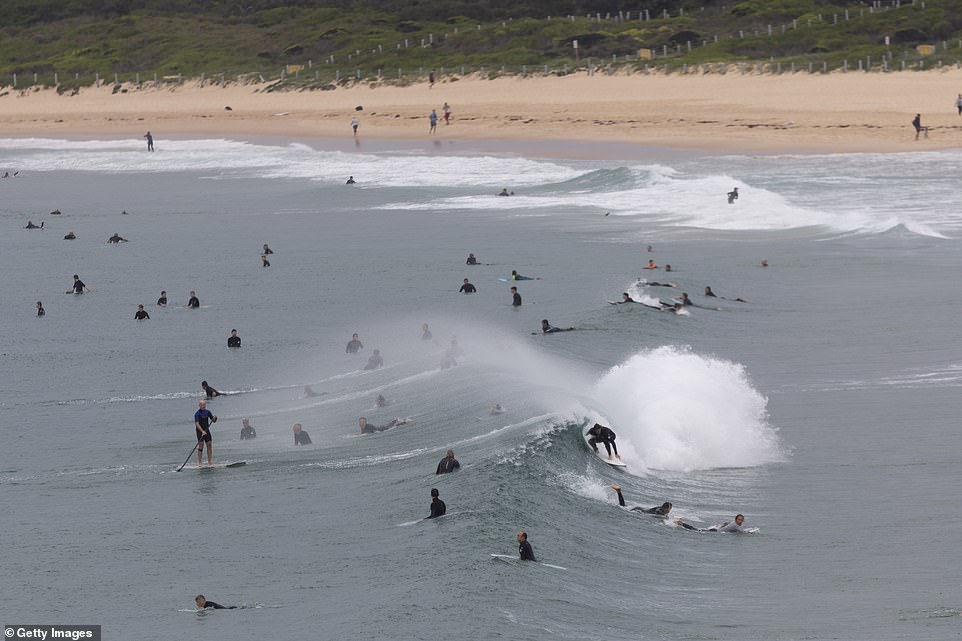 Surfers and paddle boarders were seen in the water, while walkers and runners were seen on the sand. Sunbathing is still banned