Surgeon, 93, who started working for the NHS the month it started is still a full-time professor

A surgeon who started working for the NHS the month it started is still working in a health service-run hospital 71 years later.

Professor Harold Ellis, 93, qualified as a doctor in July 1948 and immediately began training as a surgeon in the NHS’ earliest days.

Seven decades on, the grandfather-of-six commutes from his home in East Finchley, greater London, five days a week to teach at Guy’s Hospital as part of the University of London’s medical school staff.

Professor Ellis is thought to be one of the longest serving medical professionals in the UK and has ‘dedicated his whole life to the NHS’.

Refusing to slow down, Professor Ellis joked he is working into his nineties because his wife ‘likes him out the house’. But he has urged his colleagues to let him know when he is ‘past it’.

Professor Harold Ellis (pictured), 93, started working for the NHS the month it started and is now a medical professor for the health service 71 years later. The grandfather-of-six commutes from his home in East Finchley five days a week to teach at Guy’s Hospital in central London 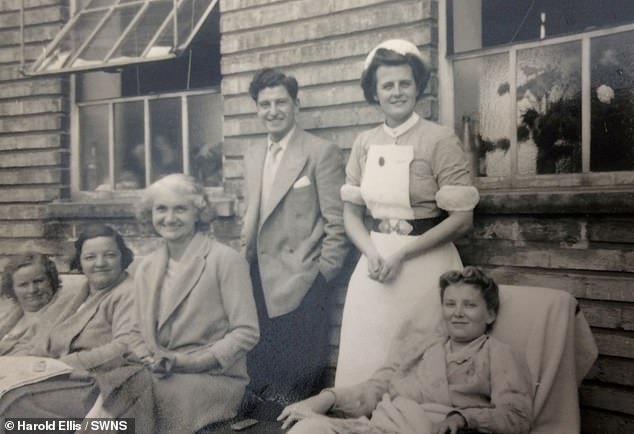 Professor Ellis is pictured with patients in 1948, the year he qualified, at Radcliffe Hospital

Professor Ellis has worked at hospitals all over the country. He even juggled running the surgical unit at the now-closed Westminster Hospital alongside being its professor of surgery in the sixties.

He continued as both a surgeon and professor of surgery at the hospital until 1989.

The grandfather then began teaching anatomy at Cambridge University.

He now teaches anatomy at Guy’s Hospital in central London as part of the University of London’s medical school staff.

Reflecting on his ‘fantastically enjoyable’ career, Professor Ellis said: ‘It was a very interesting job. I dedicated my whole life to the NHS, I’m devoted to it.

‘Of course [the NHS] has undergone tremendous change and it’s got now extremely expensive.

‘The job of a surgeon is completely different, most of the illnesses I would have treated aren’t an issue anymore.

‘And a lot of the things surgeons do nowadays I would never have done in my day.

‘Things have changed quite drastically, it’s incredible. I thoroughly enjoyed my time working as a surgeon and continue to enjoy what I do now.’

Professor Ellis believes his enthusiasm to continue working over seven decades is a testament to the impact the NHS has on people’s lives.

‘In a past generation, statistically I should have been dead about 25 years ago,’ he said.

‘It used to be that someone of 75 was seen as an old man, nowadays people of that age are running marathons.’ 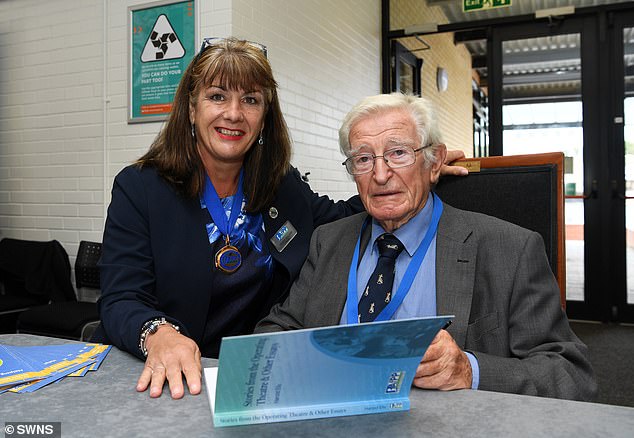 Professor Ellis (pictured with Tracey Williams, pharmacy lead for specialised commissioning at NHS England) has written a book called Stories from the Operating Theatre and Other Essays. The book explores some of the most significant moments in medical history

A SHORT HISTORY OF THE NHS

The NHS was founded in 1948 by Prime Minister Clement Attlee’s Labour Government as part of a huge overhaul of public services in the UK.

It was formed out of a long-held belief in Britain that healthcare should be free at the point of delivery regardless of wealth or status, with the atrocities suffered in the Second World War only highlighting the need for it.

The idea was a national health service available to all would be funded through a combination of taxation and national insurance contributions, with newly appointed health minister Aneurin Bevan spearheading the campaign.

The Government encountered some opposition in its efforts to establish the NHS, notably from certain medical professionals.

However, there was cross-party support for the idea, with the Conservative party also seeing the need for an NHS.

Speaking following its creation, Aneurin Bevan, former secretary of state for health, said: ‘There is nothing that destroys the family budget of the professional worker more than heavy hospital bills and doctors’ bills.’

‘The eyes of the world are turning to Great Britain. We now have the moral leadership of the world.’

The first ever NHS patient, on July 5 1948, was 13-year-old Sylvia Diggory, who Bevan visited in hospital.

Speaking after the meeting, she was quoted as saying: ‘Mr Bevan asked me if I understood the significance of the occasion and told me it was a milestone in history – the most civilised step any country had ever taken.’

Since its inception certain parts of the NHS have changed, such as the exclusion of dentistry from the service as well as payment for prescriptions and eye glasses.

Professor Ellis was born in the east end of London in 1926 to Polish-Jewish parents, who worked as a barber and dressmaker.

He graduated from St Olave’s Grammar School and gained a Government scholarship to study medicine at Queen’s College, Oxford.

His studies meant Professor Ellis avoided being enlisted to fight during the Second World War.

Once graduated, his first job was at the Radcliffe Infirmary in Oxford.

He then went on to practice surgery at hospitals in Oxford, Sheffield, Northampton and London.

Professor Ellis, who enjoys gardening and country walks, has been married to his ‘wonderful and devoted’ wife Wendy for 63 years.

The couple have two children and six grandchildren.

Speaking of why he continues working in his nineties, Professor Ellis joked: ‘My wife won’t let me in the house during the day, she likes to get me out in the morning!’

The professor is renowned among medics for his textbook Clinical Anatomy, which is in its 13th edition.

‘I had always been interested in teaching anatomy while I was a surgeon, it was a hobby,’ he said.

‘Many years ago I wrote a book on anatomy for medical students and that’s still going strong.

‘I still find it very interesting. Teaching medicine is a very practical thing.

‘You can’t learn from books, it has to be learnt on the job. You have to use a human body to teach anatomy.

‘I keep telling my colleagues if they find I’m getting too old and past it, tell me and I’l leave.’

Professor Ellis has also produced hundreds of papers and dozens of books. The most recent, Stories from the Operating Theatre and Other Essays, was released this week.

The book is based on monthly columns he wrote for the Journal of Perioperative Practice and explores some of the most significant moments in medical history.

This includes Horatio Nelson’s amputation, through to the introduction of anaesthesia and Marie Curie’s discovery of radium.

His personal achievements aside, Professor Ellis heaps praise onto the students he teaches.

‘I admire the modern students,’ he said. ‘They work hard and they are willing to listen.

‘More than 50 per cent of students these days are women, which is great.

‘When I was a young doctor, there were lots of female doctors and some very distinguished ones, but only a small number of women would go into surgery.’