Surgeon ran over rugby fan to leave him with brain damage

Professor Nigel Bundred, 61, told police his driving had been ‘truly shocking’ and that he felt ‘ashamed’, adding: ‘I’m a doctor, you go into medicine to save lives, not to cause harm and injury’

An award-winning cancer surgeon who drove his Mercedes-Benz on the wrong side of the road and mowed down a bank worker has been convicted of careless driving.

Professor Nigel Bundred, who is credited with an ‘astonishing’ breakthrough in treating breast cancer, was on his way back to his £1.2million home from a trip to the gym when he cut the corner into his road and struck David O’Driscoll.

The 39-year-old – who had become a father just four weeks earlier – was catapulted into the air and left in a coma, suffering permanent brain damage including losing a large chunk of his skull.

More than a year on the rugby fanatic is unable to play rough and tumble games with his son Ronan for fear of aggravating his injury and does not know when he will be able to return to work.

After the impact Prof Bundred, 61, told police his driving had been ‘truly shocking’ and that he felt ‘ashamed’, adding: ‘I’m a doctor, you go into medicine to save lives, not to cause harm and injury.’

But the breast cancer specialist, who will now have to declare his conviction to the General Medical Council, opted to stand trial, arguing he hadn’t seen Mr O’Driscoll because street lights weren’t working and his car’s door pillar was in the way.

However despite enlisting a top defence lawyer nicknamed ‘Merlin the magician’ for making Manchester City stars’ driving cases disappear, he was found guilty of careless driving after CCTV showed his car had been on the wrong side of the road.

Mr O’Driscoll is now taking legal action against the surgeon’s motor insurers which have refused to pay enough to cover his rehabilitation, leaving him reliant on the generosity of family. 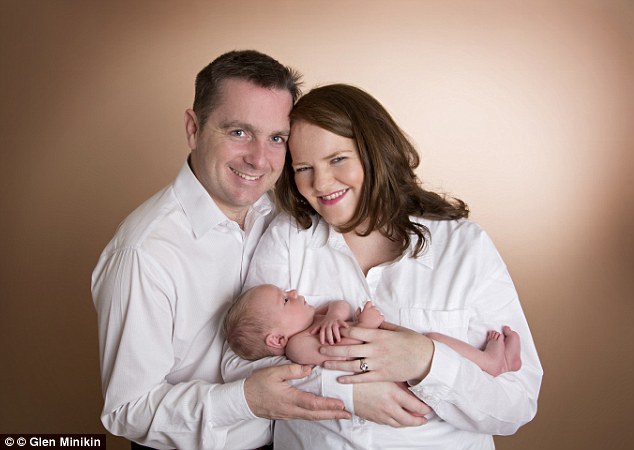 David O’Driscoll – who had become a father just four weeks earlier (pictured with wife Kerri and son Ronan) – was catapulted into the air and left in a coma, suffering permanent brain damage including losing a large chunk of his skull (pictured before the crash) 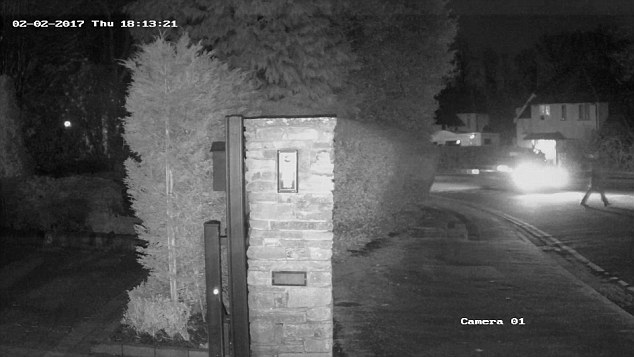 As he was making the familiar right turn into his ‘millionaires’ row’ street at about 6pm in his Mercedes E280 at 20-30mph, Prof Bundred ploughed into Mr O’Driscoll, who was walking to his own car after finishing work

After the case he said: ‘I’m pleased that he’s finally paying a small price for his actions, but it’s nothing compared to the very high price my family and I have paid.

‘I missed nearly four months of my young son’s life, my future career prospects have been affected and I continue to face having regular brain surgery.’

Bundred is Professor of Surgical Oncology at the University Hospital of South Manchester NHS Foundation Trust.

In 2016 the award-winning surgeon presented an ‘astonishing’ breakthrough which suggested breast cancer tumours could be destroyed in less than two weeks by using a combination of drugs prior to surgery. 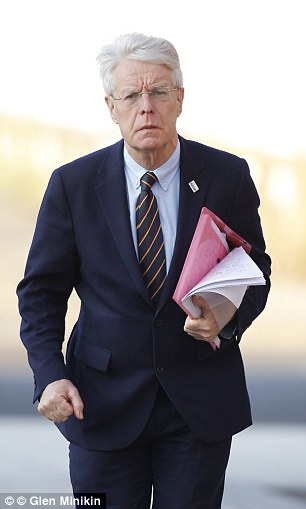 On February 1 last year he was visiting Edinburgh to train medics in a new surgical technique.

After an ‘early night’ he took the train home to Wilmslow, Cheshire before driving to the gym ahead of what he hoped would be a quiet evening catching up with his wife and children.

Instead, as he was making the familiar right turn into his ‘millionaires’ row’ street at about 6pm in his Mercedes E280 at 20-30mph, he ploughed into Mr O’Driscoll, who was walking to his own car after finishing work.

Bundred – who insisted throughout he never saw the pedestrian – stopped immediately and checked on him before calling an ambulance.

‘I looked and I didn’t see him,’ he told a police officer called to the scene. ‘The first thing that happened was I felt something hit my car. I was mortified.’

During a police interview several days later he added: ‘I just feel so guilty about the whole thing. However much I look back I didn’t see him.’

He was then shown CCTV footage which showed he had cut the corner as he turned right and travelled several feet on the left of the side road.

Asked by Pc Nicola Rimmer what he thought of his driving, he described it as ‘truly shocking’, adding: ‘I’m ashamed.’

Bundred’s car was in perfect working order, he had indicated right and was using dipped headlamps, and he was in good physical condition, the police investigation found. 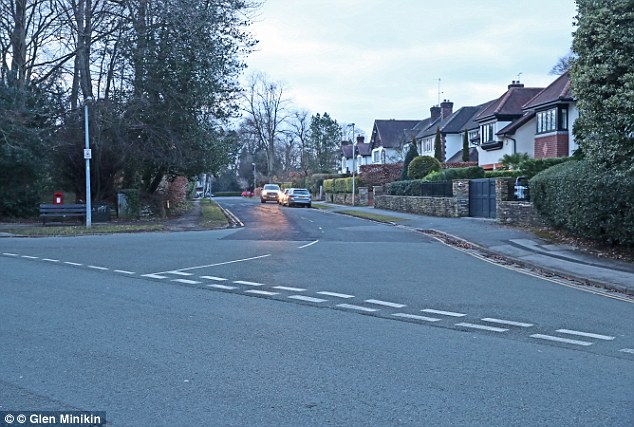 Bundred’s car was in perfect working order, he had indicated right on Carrwood Road in Wilmslow (pictured) and was using dipped headlamps, and he was in good physical condition, the police investigation found

At his trial, Bundred told the magistrates his occupation, adding: ‘My rationale is to keep people alive so I was very shocked by the accident because it was against what I trained to do.’

But he said that just as a surgeon reflects back when something goes wrong during an operation, he had concluded that the collision hadn’t been anyone’s fault.

He said the junction was a known safety risk as overhanging trees on the left-hand pavement of the side road from which Mr O’Driscoll was crossing left it in darkness.

In addition, he said streetlights weren’t working properly and the front pillar of his car must have hidden Mr O’Driscoll from view as he turned right.

Cross-examined by prosecutor Joe O’Connor, he told the trial at Tameside magistrates court that ’90 per cent’ of drivers cut that corner in the same fashion.

‘I came round at a reasonable speed, and apart from being on the wrong side of the road I don’t think I could have done anything else.

‘I think it was an accident waiting to happen – even if I had braked, it was too short a time to avoid him.’ 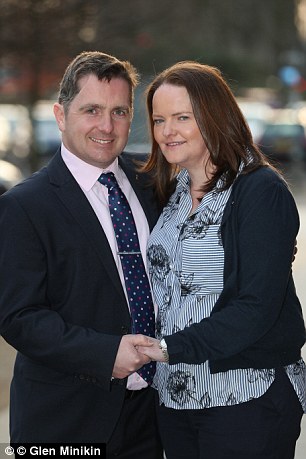 Explaining why he told police he felt ‘guilty’, he said: ‘In the immediate aftermath you blame yourself, that’s natural.

‘When I reflect, I looked, the way seemed to be clear, I had signalled, I wasn’t going fast – I’m not sure I could have done anything different.’

Bundred added: ‘The problem was that I did look, there was nobody there, he had walked into the dark area.’

Mr O’Connor retorted: ‘The problem was you cut across on the wrong side of the road.’

‘That is a view,’ the surgeon replied.

He insisted that as Mr O’Driscoll had been walking towards the side of the road he should have been on, he would have hit him anyway even if he had been following the Highway Code correctly.

Addressing the magistrates, he insisted it was ‘entirely possible you or I or anybody else in this courtroom’ would have driven in exactly the same way and not seen Mr O’Driscoll.

But finding him guilty of careless driving, chairman of the bench Steven Burston told him he knew the risks at that junction ‘therefore extra care should have been taken’.

Mr O’Driscoll broke down in the witness box as he read a moving statement detailing how the crash had transformed his life and left him feeling he had ‘failed’ his young family.

The brain damage has resulted in blurred vision and imagining things are moving when they are not, requiring him to wear an eyepatch as well as a padded helmet, he said.

The dent in his head from where part of his skull was removed left him feeling constant pins and needles while making him ‘an unwelcome target of attention, glances and laughs’.

Mr O’Driscoll said one of the most distressing things was struggling to comprehend what his wife had gone through just weeks after giving birth.

‘Kerri, whom I love dearly, had to watch me wheeled into operations after being told by the surgeons that I may not survive those operations,’ he said.

‘She watched me receiving therapy while not knowing what kind of me she would get back or when.

‘She had no way of knowing how much of my mind, my memory, my personality or my feelings would return, or even if I would relearn the ability to walk and feed myself.

‘I cannot imagine how painful it would be to have had to go through that, if the roles had been reversed.’

He added that his catastrophic injuries had ‘deprived me of experiences with my son’ who is now 13 months old.

‘I am very guarded when playing with my son as a kick or hit from him in the hole could be fatal,’ he said.

He had also bought Ronan a tiny Ireland rugby kit for them to watch his first Six Nations together – instead he spent the entire tournament in a coma.

Bundred – who gave no reaction to the verdict but was said to be ‘truly sorry’ – was fined £2,000 and given five penalty points on his licence in addition to three he already had for speeding.

He was also ordered to pay £860 prosecution costs and a £170 victim surcharge and left court without commenting.

Afterwards flanked by his wife Kerri, 33, Mr O’Driscoll, from Mossley, Greater Manchester, said: ‘I’m very relieved – it’s been a long wait but finally we’ve got an element of justice.

‘When I saw the CCTV you could see all four of his wheels were on the wrong side of the road, so I was very surprised when he pleaded not guilty.’

Afterwards his lawyer, Matt Brown of Irwin Mitchell, said: ‘This accident could have easily been avoided had Professor Bundred been more vigilant – Mr O’Driscoll was clearly visible as he crossed the road that evening, as he was perfectly entitled to.

‘It’s important that all drivers take note of the consequences of careless driving and ensure that they particularly look out for vulnerable road users such as pedestrians.’