Surgeons spent 10 hours removing a 33lb (14.9kg) tumour from the back of a man’s neck after it had been left untreated for nearly 50 years.

Zhao Xingfu, 64, said the growth, known as a lipoma, first appeared 47 years ago and was initially ‘the size of an egg’.

Aged just 17, Mr Xingfu, from Panzhou City, China, ignored the mass due to it being painless and him being unable to afford treatment.

After the weight of the tumour left Mr Xingfu struggling to walk, his son Zhao Jianjiang sought the help of Dr Dong Shixiang, from the Guizhou Tumour Hospital.

Now at home a week after the surgery, Mr Xingfu is expected to make a full recovery.

Despite feeling ‘relieved’ that the operation was a success, Mr Xingfu jokingly said: ‘I’m not used to it not being there yet!’

Zhao Xingfu had a 33lb (14.9kg) tumour removed from the back of his neck after 47 years 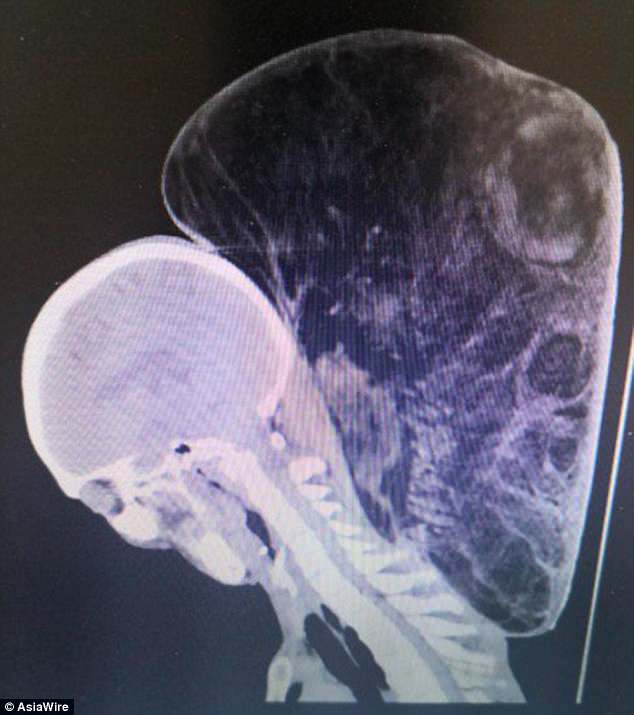 An X-ray shows the size of the growth, which was making it difficult for him to walk 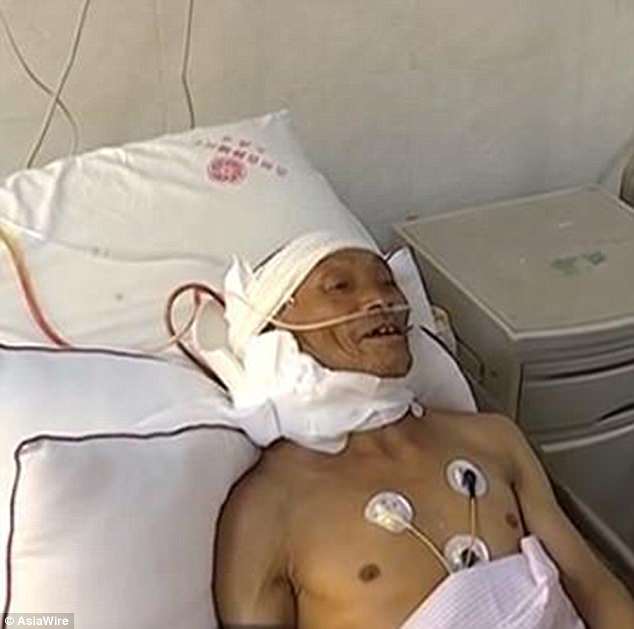 A week on from the operation, Mr Kumar is ‘relieved’ he no longer carries the tumour

WHAT IS A LIPOMA?

Lipomas are non-cancerous lumps caused by an overgrowth of fat cells.

They can form anywhere on the body where people have fat cells.

Around one in 100 people in the UK, and two per cent in the US, are affected.

Lipomas may be caused due to an inherited faulty gene.

They are usually just under the skin, shaped like a dome and soft to touch.

Most do not cause any pain unless they are deep in the body and press on nerves or organs.

If a lipoma affects the bowels, it may cause constipation and nausea.

Most lipomas do not need removing.

Surgery may be necessary if the growth is large, growing, causing symptoms or unsightly.

‘I became accustomed to it’

Mr Jianjiang had never before seen his father without the growth.

He said: ‘I’ve only known my father with the large tumour, so I gradually became accustomed to it.’

With the help of family, Mr Jianjiang raised enough money to pay for his father’s surgery.

Dr Dong said: ‘In all my years, I’d never seen such a large tumour.’

He cut away around 95 percent of Mr Xingfu’s growth, which is expected to leave him free of the condition for the rest of his life.

Since being discharged, Mr Xingfu is continuing his recovery at home. 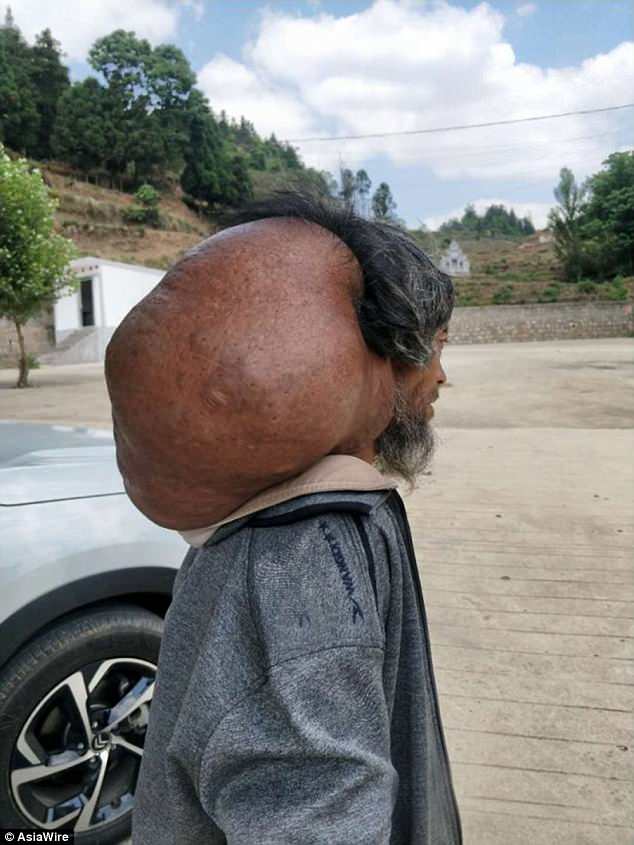 Due to it being painless and him being unable to afford treatment, Mr Xingfu ignored it 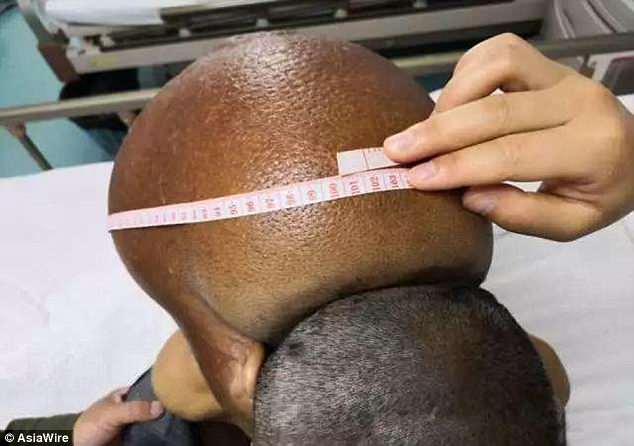 The huge tumour had a circumference of 100cm, or 40 inches 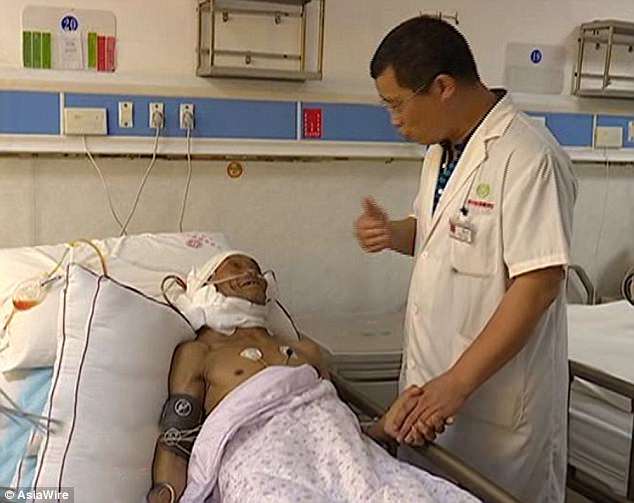 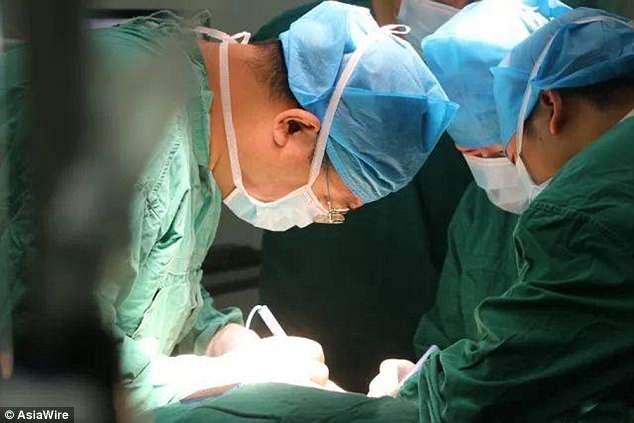 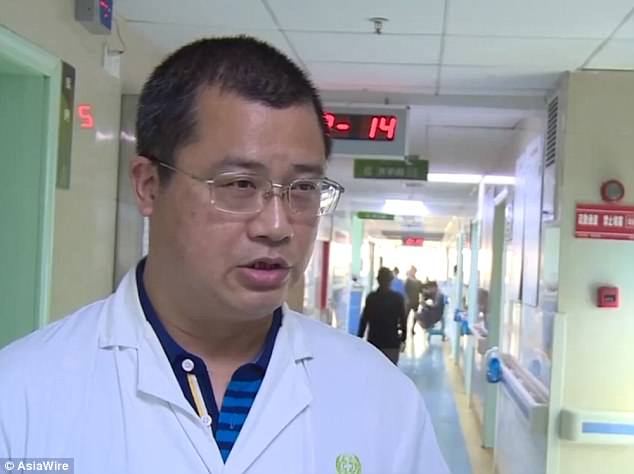 Dr Shixiang was visibly exhausted after completing the mammoth procedure