Susanna Reid suffered a wardrobe malfunction on Wednesday as she took to the stage to accept an award at the TRIC Awards at London’s at Grosvenor House.

While accepting the Good Morning Britain’s Multi-Channel News award, the presenter, 51, told the audience: ‘If you’re wondering why I’m holding onto my dress, I’ve just popped a button!’

In scenes witnessed by MailOnline, Susanna was seen clutching the front of her white dress as she joined her co-stars including Kate Garraway and Charlotte Hawkins on stage.

Uh-oh! Susanna Reid suffered a wardrobe malfunction on Wednesday as she took to the stage to accept an award at the TRIC Awards at London’s at Grosvenor House

Despite her dress blunder, Susanna looked as glamorous as ever in her simple white 1950s-inspired blazer dress with nude heels.

Rounding off her look, she added a gold pendant and a plethora of other gold jewellery.

The broadcaster styled her brunette tresses styled into loose waves while she highlighted her features with a sleek make-up palette. 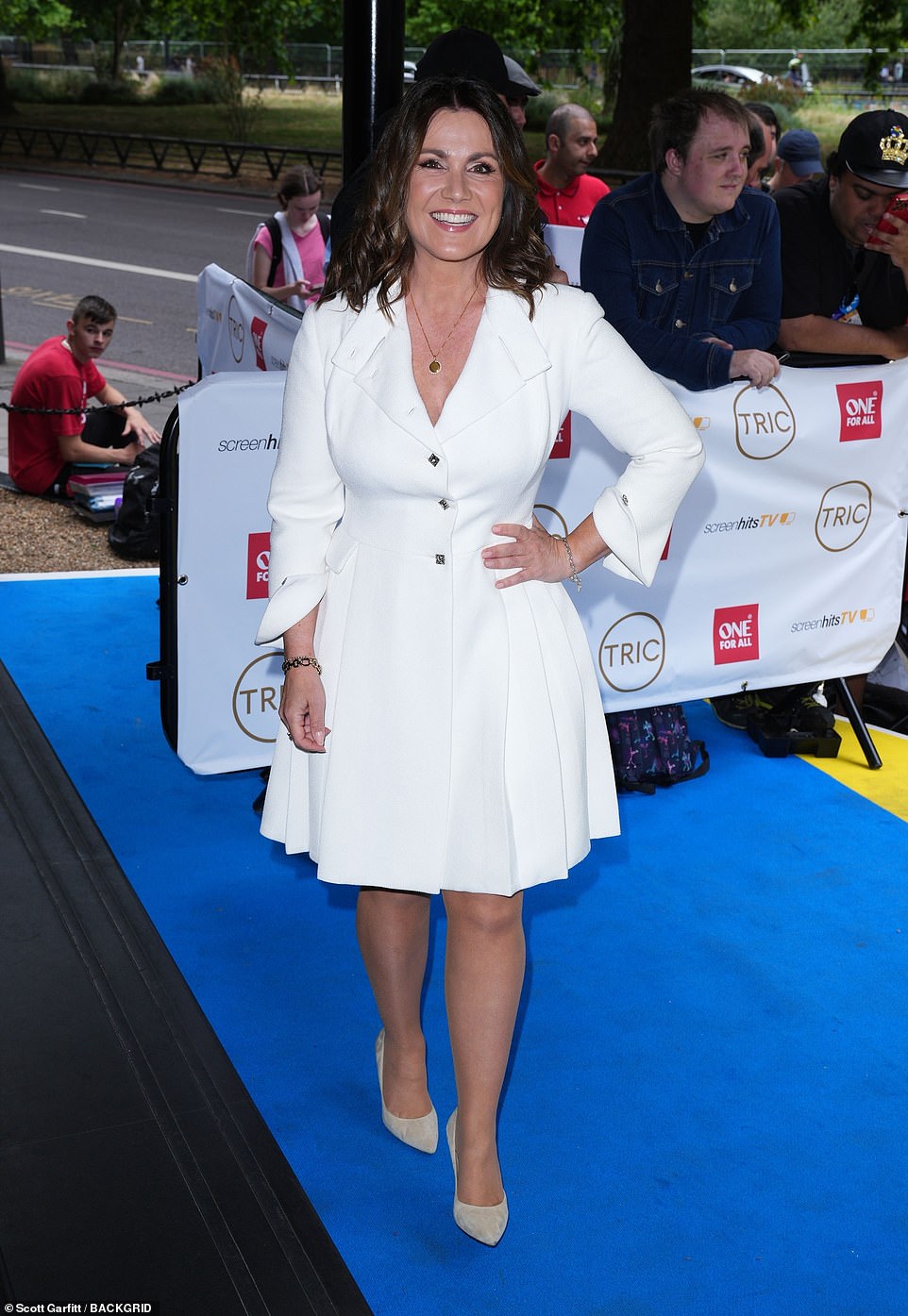 Looking good: Despite her dress blunder, Susanna looked as glamorous as ever in her simple white 1950s-inspired blazer dress with nude heels

The Mastermind host had won the TRIC Special Award and it was presented by Trevor McDonald.

Ant and Dec, Kate Garraway, drama It’s A Sin and Strictly Come Dancing were among this year’s nominees in the 17 categories – with the winners decided by the public and industry vote. 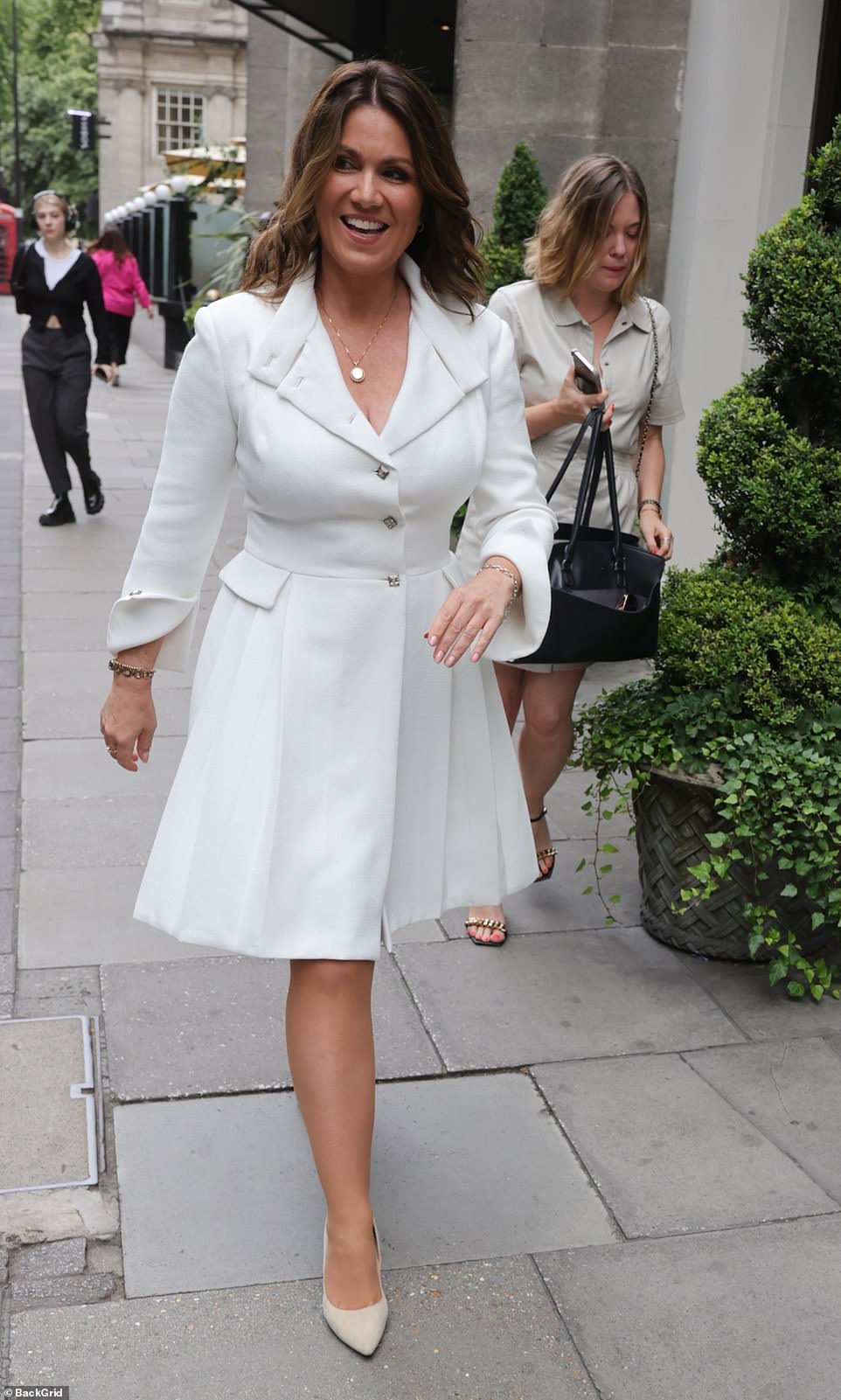 A bity of all white: Rounding off her look, she added a gold pendant and a plethora of other gold jewellery 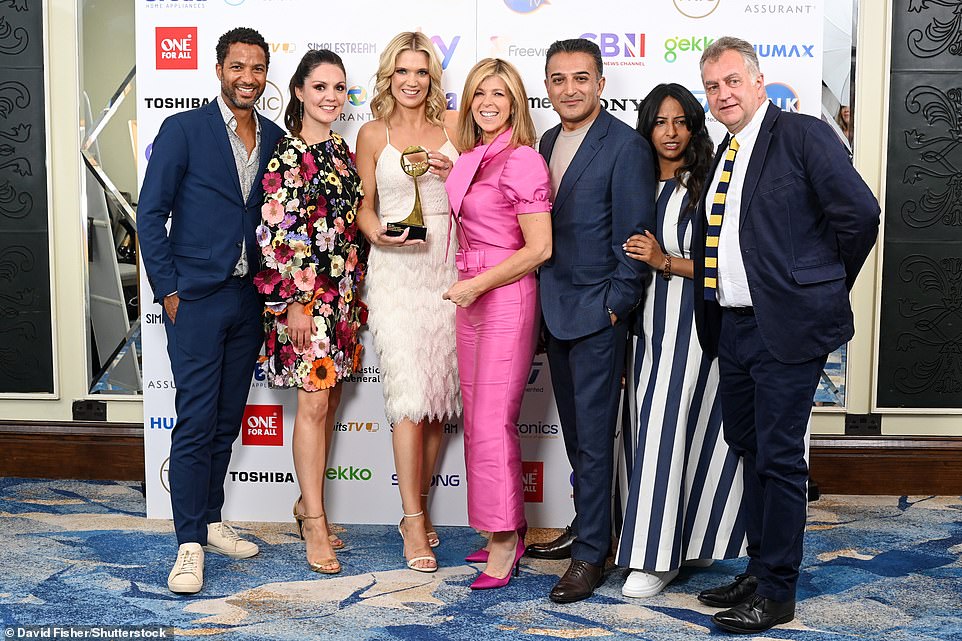 Absence: Susanna was missing from the winners photocall after her wardrobe malfunction, with her co-stars seen posing with their prize 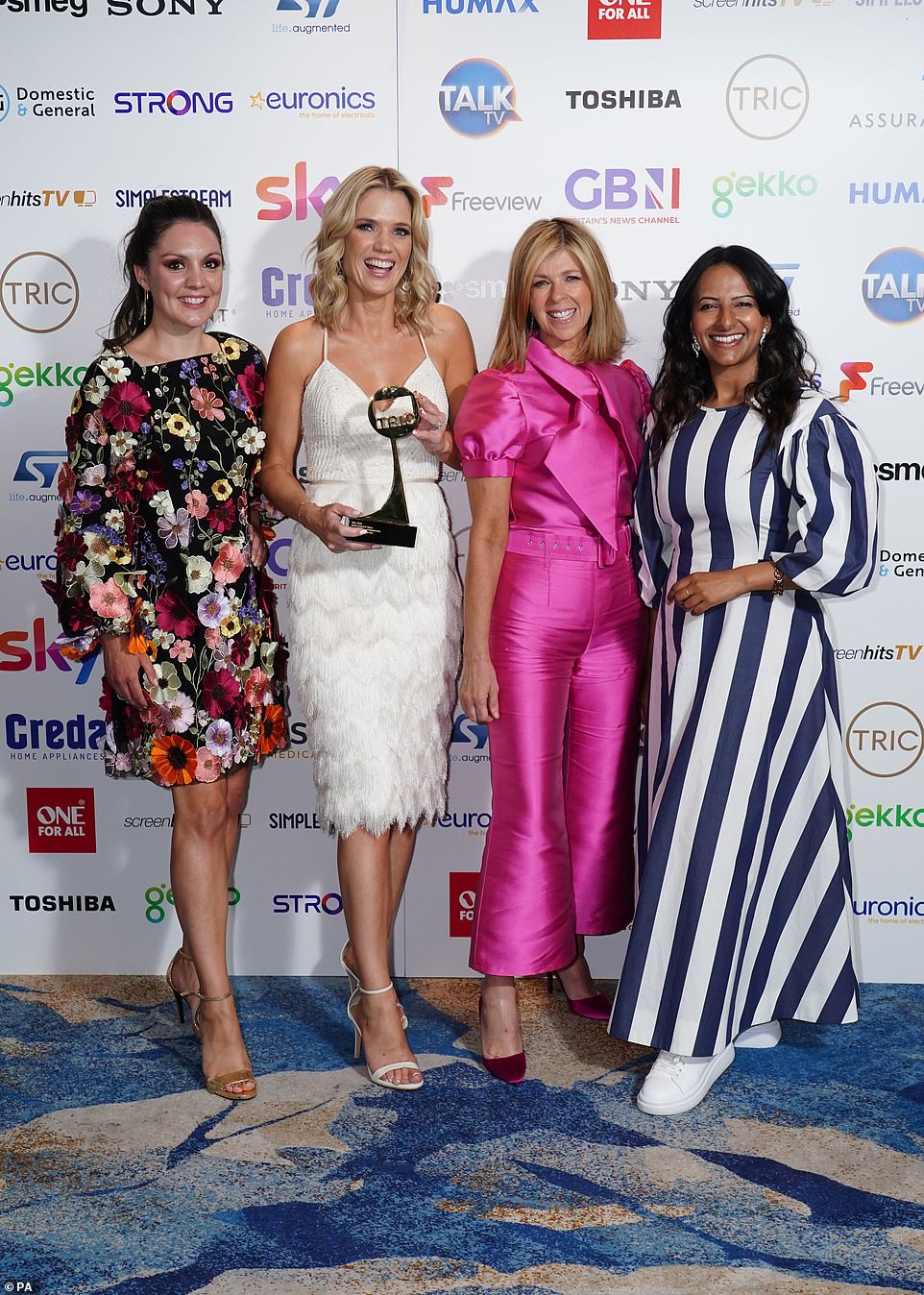 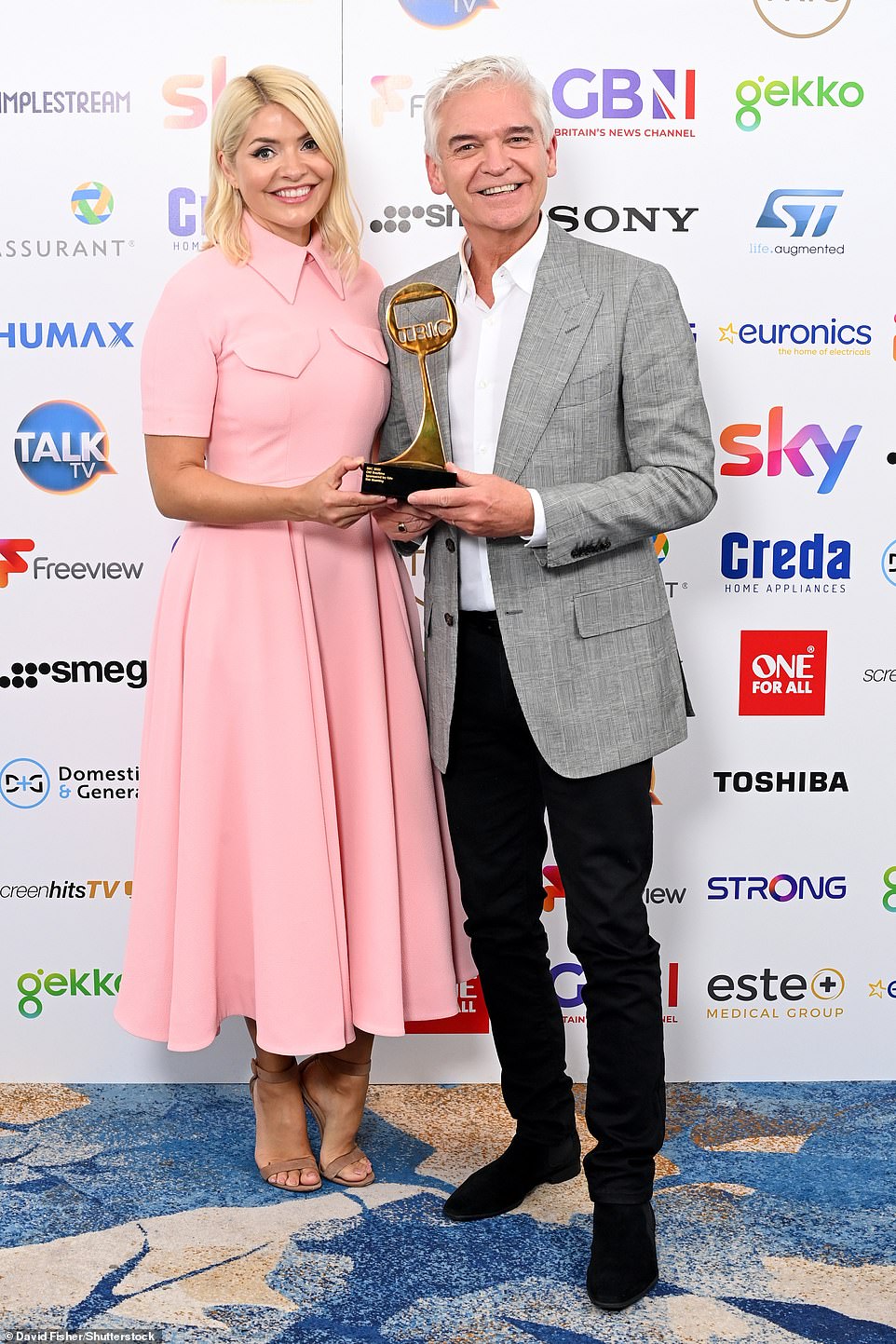 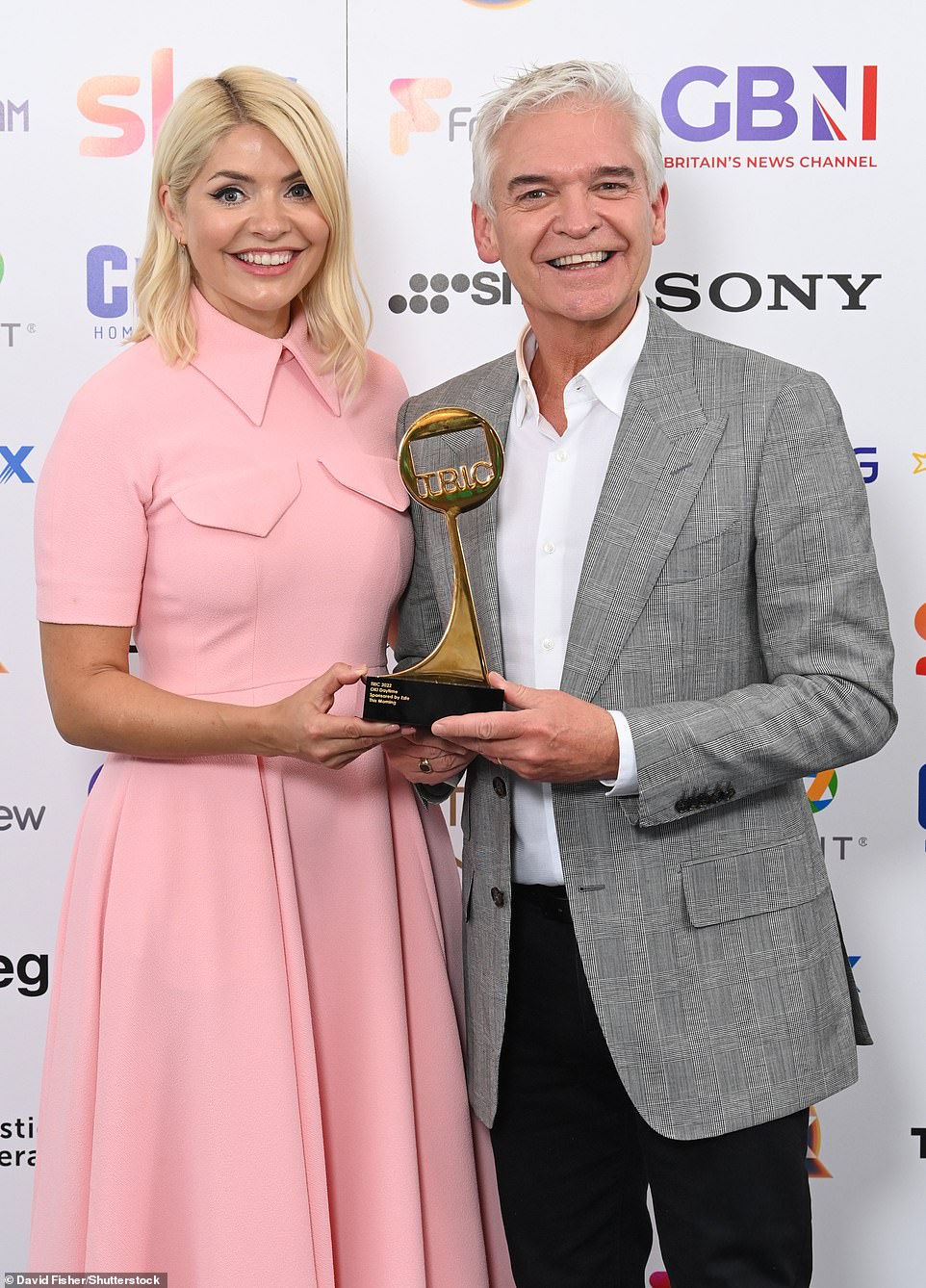 All smiles: The presenters were in great spirits as they posed for a delighted snap in the winners room

The News Presenter award is a four-way fight, with GB News’ Eamonn Holmes scooping the gong over Stephen Dixon, and the BBC News Team’s Clive Myrie and Victoria Derbyshire.

The New Drama category prize was given to the award-winning It’s A Sin over Vigil, The Pembrokeshire Murders and Around the World in 80 Days.

The Drama award was given to Line of Duty, despite Call the Midwife, Vera and All Creatures Great and Small also being contenders. 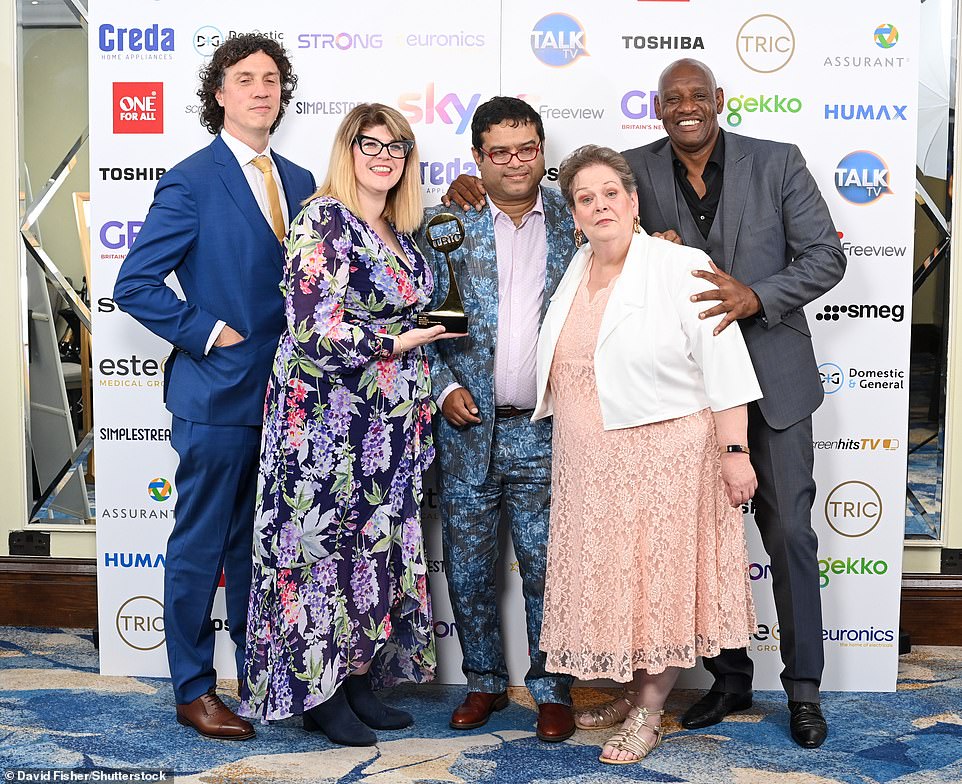 Here they are: The Chasers posed with their prize as their show won in the Gameshow category 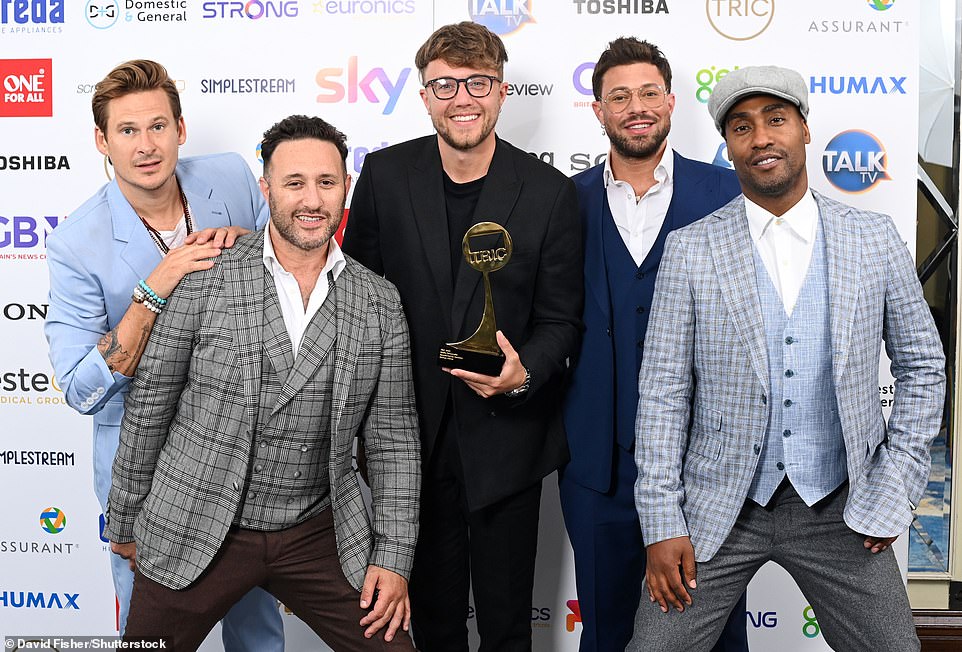 All rise for the winner! Roman Kemp posed with boyband Blue after his Capital Breakfast show was given the Radio Programme prize, with the host also received Radio Personality 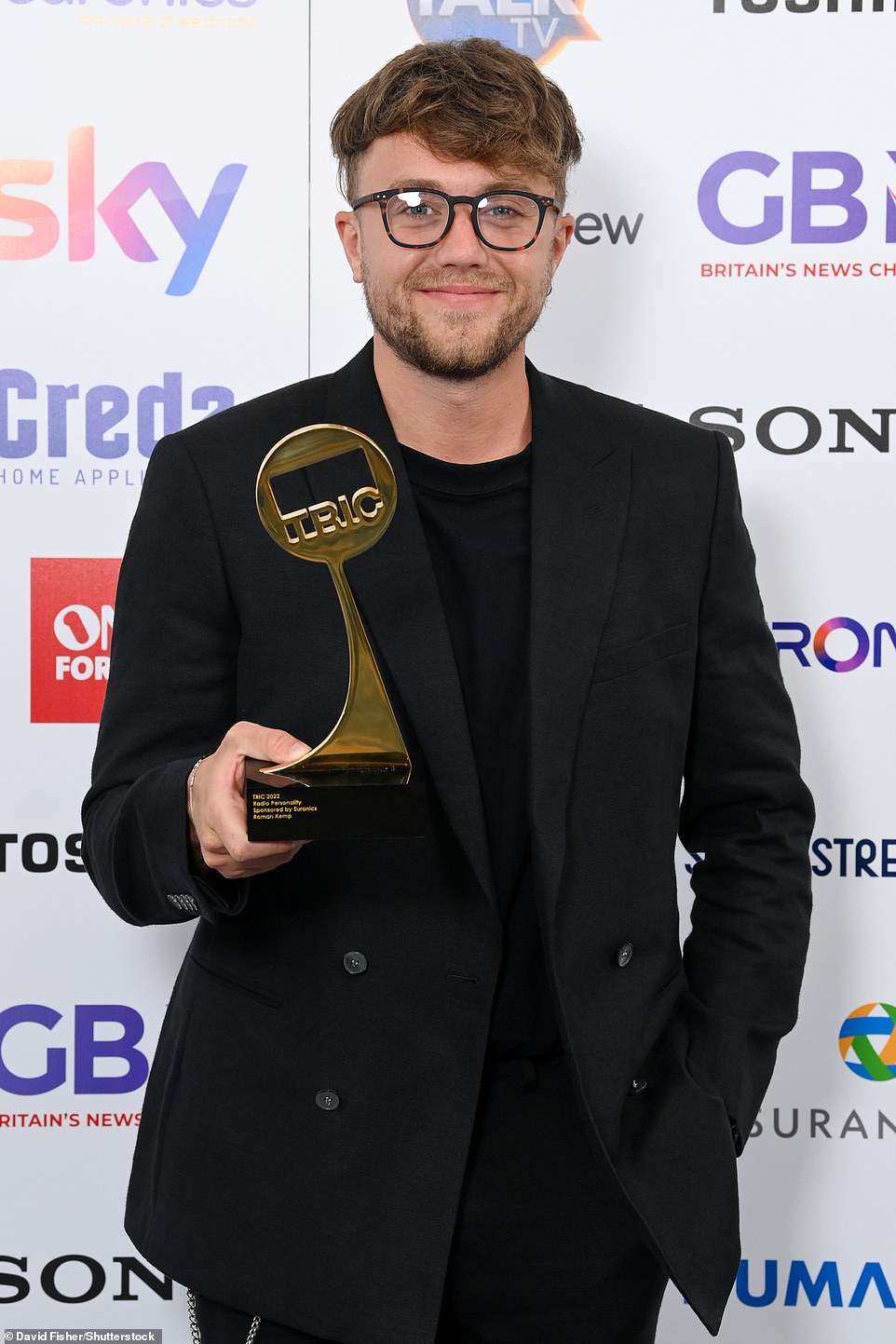 Congratulations: Roman cut a dapper figure as he posed with his Radio Personality award 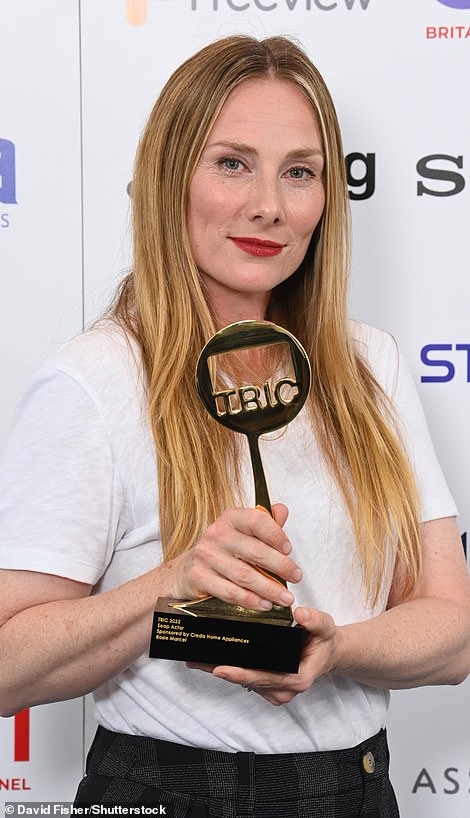 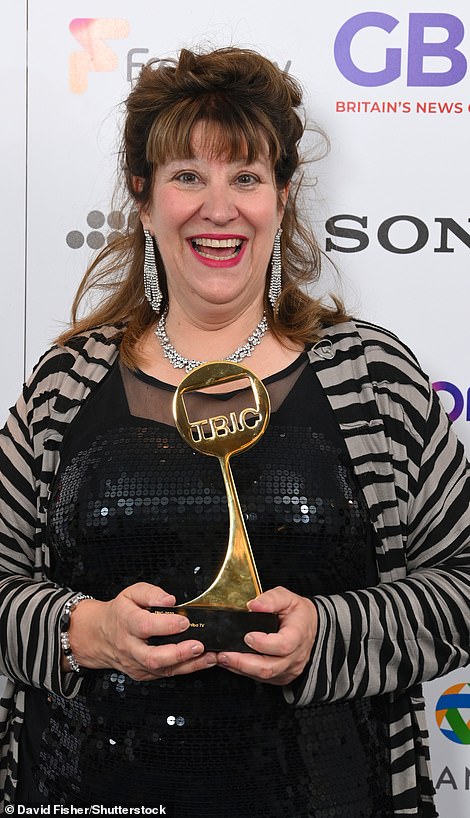 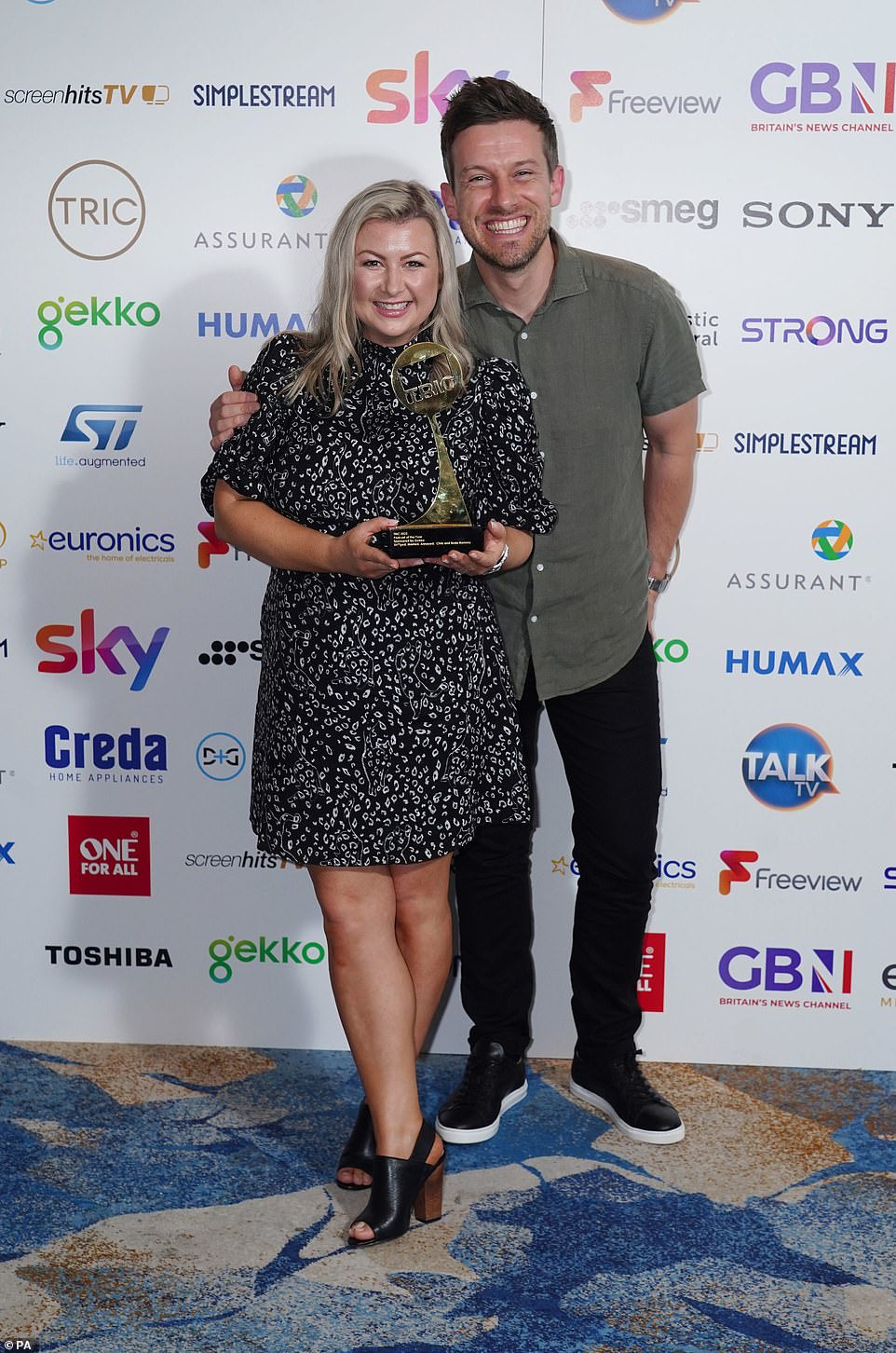 Couple goals: Chris and Rosie Ramsey looked thrilled after their podcast of the year win 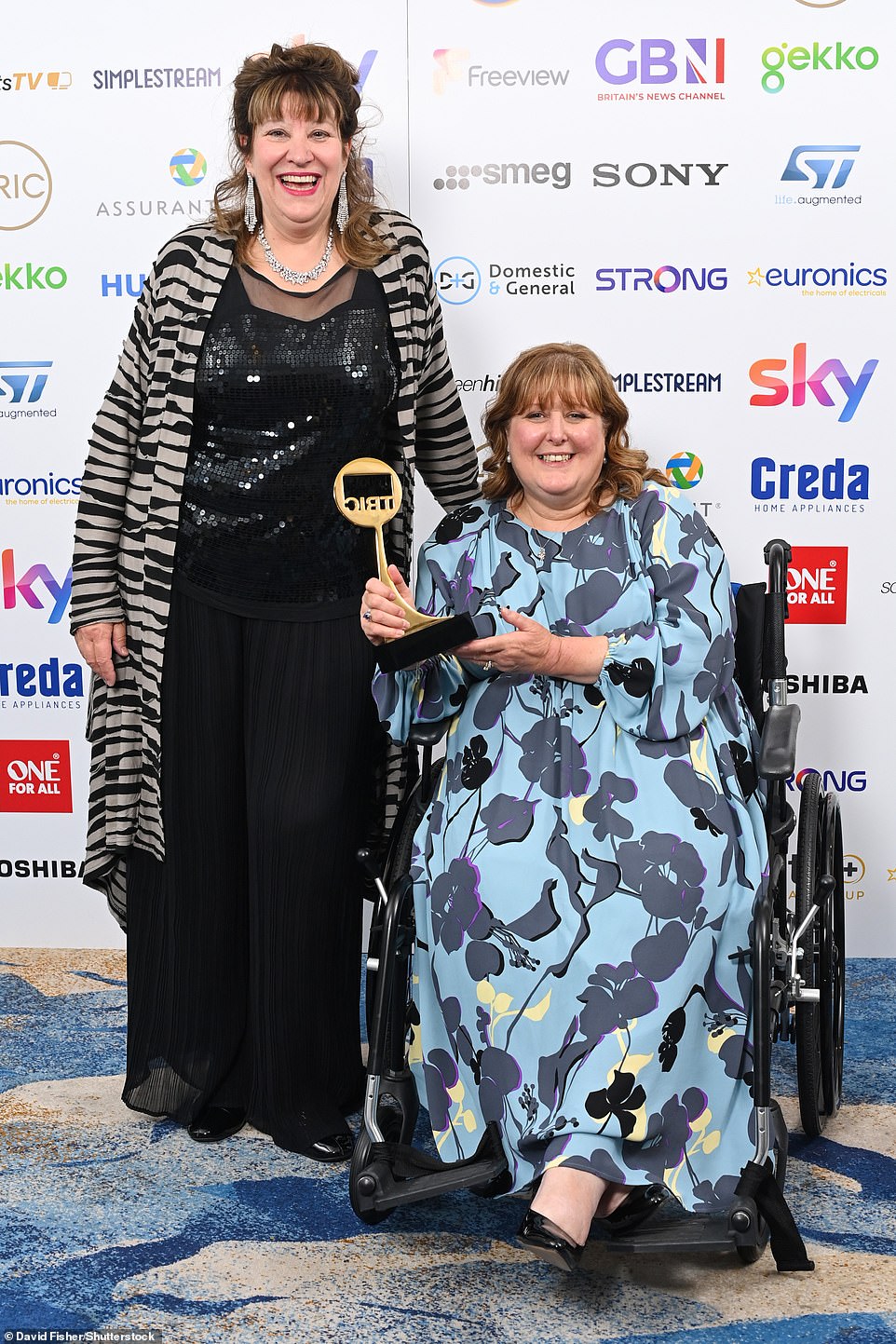 Fashionistas: Jill Nalder and Andria Doherty dressed to impress for the awards

In Game Show, it was a tight race, but The Chase proved to be the victor over Michael McIntyre’s The Wheel, Richard Osman’s House of Games and Would I Lie To You?

In the Soap category, it was a battle of heavyweights with Coronation Street, Emmerdale, EastEnders and Holby City all fighting for the gong, and it was the Yorkshire-based soap that scooped the gong. 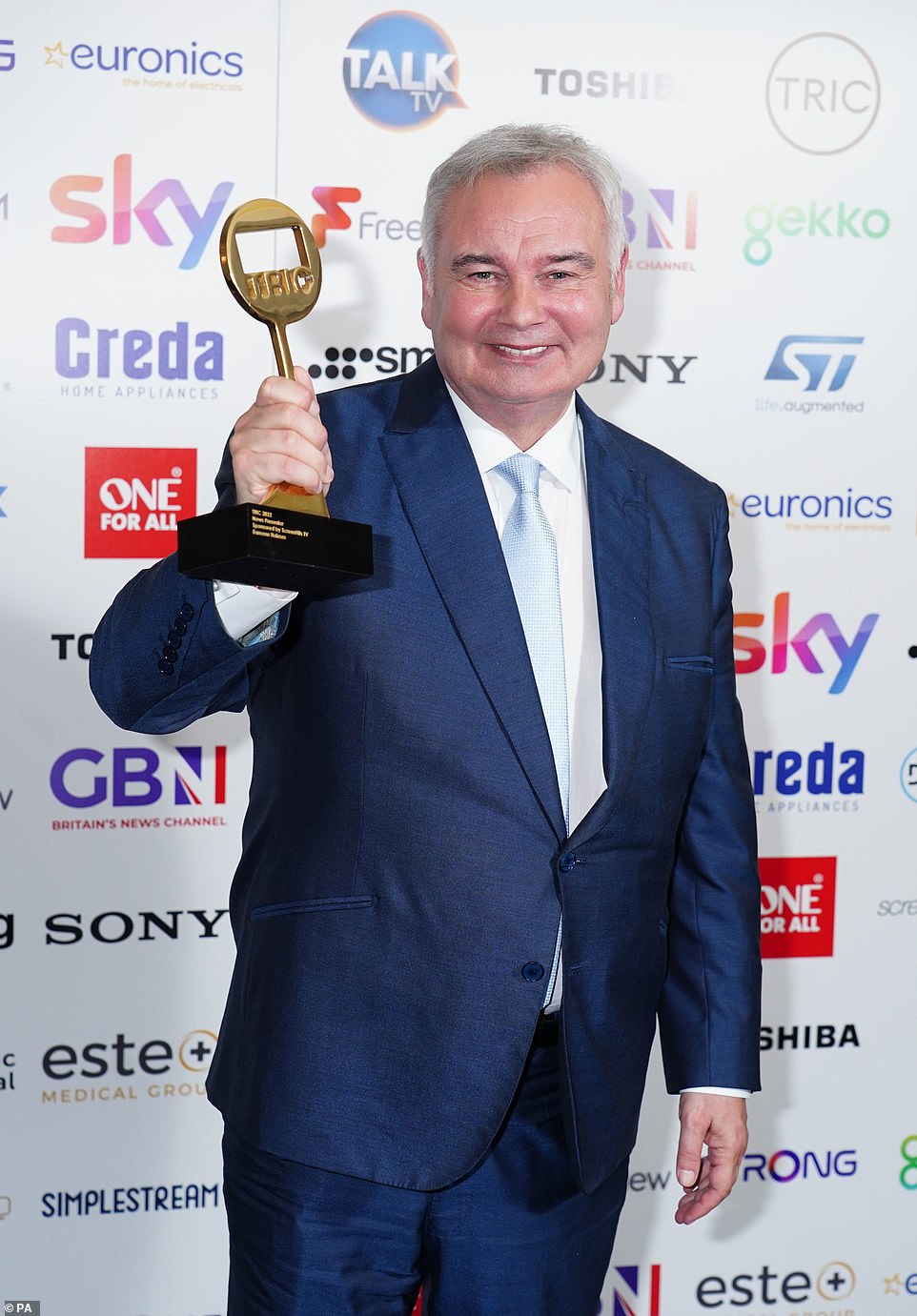 Look at this: Eamonn Holmes posed proudly  with his news presenter of the year award 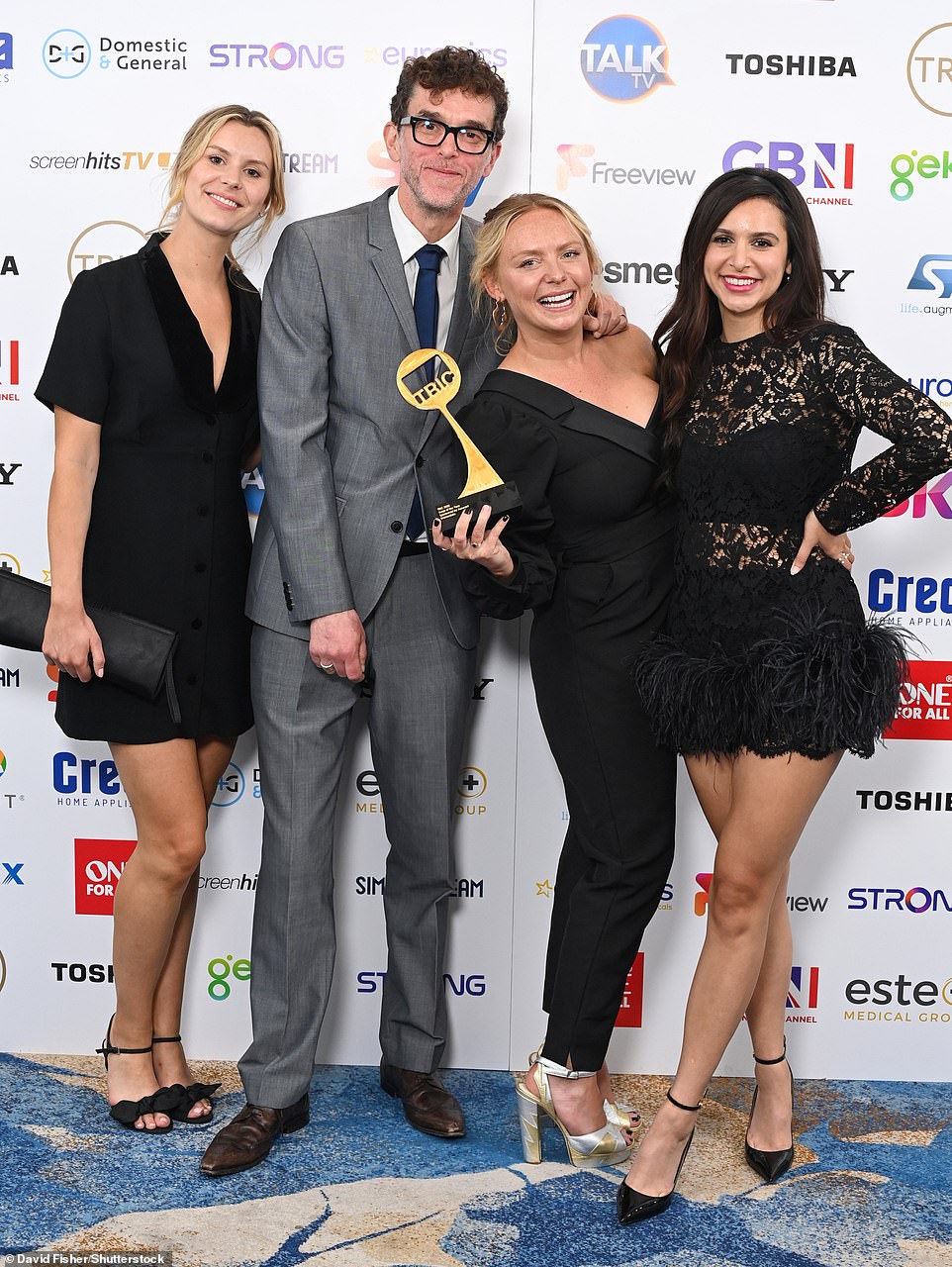 Jubilant: Emmerdale stars were chuffed after winning Soap of the Year 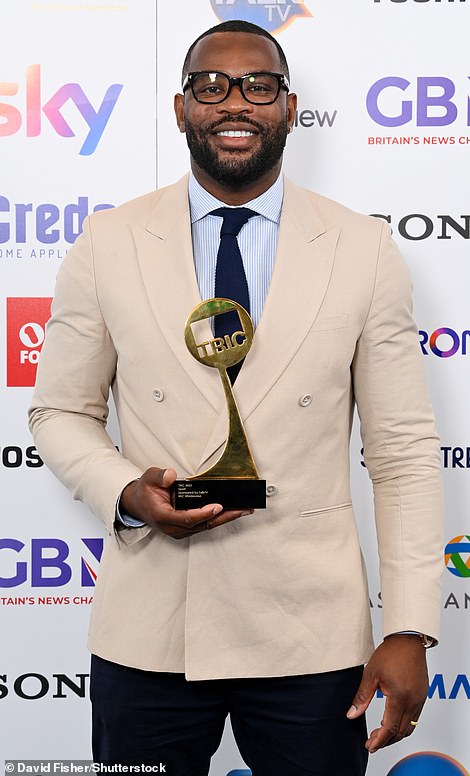 Strictly Come Dancing was awarded the Reality prize, beating out Clarkson’s Farm, The Masked Singer and I’m A Celebrity Get Me Out Of Here!

The TRIC Awards recognise the very best TV, radio and online shows, as well as Britain’s most-loved stars and talent.

Soap of the Year

The Graham Norton Show (BBC One)

Podcast of The Year

Best TV Personality of the Year

All Creatures Great and Small (Channel 5)

Call the Midwife (BBC One)

Line of Duty (BBC One) – WINNER

A League of their Own (Sky One)

Match of the Day (BBC One)

Michael McIntyre’s The Wheel (BBC One)

I’m a Celebrity Get Me Out Of Here (ITV)

A Place in the Sun (Channel 4)

The Great British Bake Off (Channel 4)

Paul O’Grady: For the Love of Dogs (ITV) – WINNER

The Repair Shop (BBC One)

Around the World in 80 Days (BBC One)