SUSANNA REID: Washed up by 50? Nonsense! TV’s never been better for women like me

My good friend Fiona Bruce admitted this week that she didn’t expect to be working at the grand old age of 56.

Isn’t it mind-blowing that someone as super-brainy and competent as Fiona finds herself surprised to still be in a job even though David Dimbleby, whom she replaced as the host of Question Time, was on our screens till he was 80?

Reading about her shock, I was struck by how lucky I am. I didn’t expect to still be on TV as I approach 50, either.

‘Things have improved in that sense,’ Fiona says, and when I texted her to say thank goodness for that, she replied: ‘Men and women over 50 should be equally employable and let’s not entertain the idea any more that they’re not.’

But let’s not forget there used to be a veritable phobia of ageing females on television. I experienced it myself. When my first grey hairs appeared in my 30s, a senior BBC producer quietly took me aside and told me to cover them up. It was the first time I realised being youthful was a job requirement — looking older was not allowed.

It was not that long ago that Arlene Phillips was axed as a Strictly judge amid allegations of ageism — it was 2009; she was 66 at the time — and I don’t think that would happen now.

Rather than something to fear, the inclusion of older women matters. TV viewers don’t fall off a cliff when they are 50, so why should the faces broadcasting to them?

The disposable, middle-aged career woman is a cliché that has been cast aside. And I’d say we’re experiencing a golden age for the midlife woman, which is being reflected on our TV screens.

At the weekend, I texted one of my oldest school friends whose 50th birthday was on Monday, ‘What have you got planned?’

‘Nothing,’ she replied glumly. ‘The restrictions mean I can’t have a party and, anyway, I’ve gone into denial about it.’

Of course, it’s not unusual to feel this way. For women, 50 has too long been seen as a symbolic cut-off point. A roadblock where your energy, vitality and career prospects were once expected to come to a screeching halt.

Physical changes and the responsibility of caring for older children at the same time as elderly parents mean some women might well feel their light dimming as they peer over their bifocals at the road ahead. 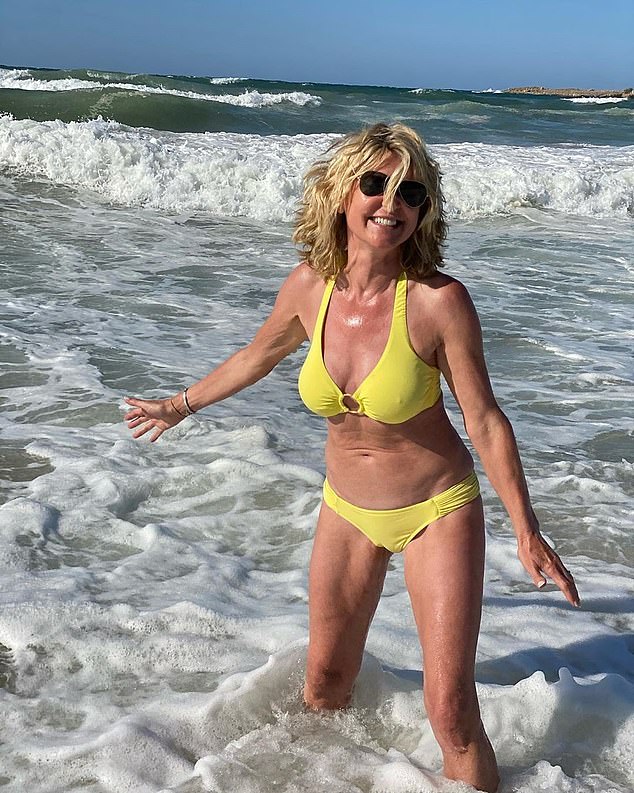 Susanna said she bumped into Anthea Turner, 60, (pictured) last year and can vouch that she doesn’t look much different to when she presented Blue Peter

I told my friend to get dressed up and I took her out to dinner to cheer her up. Gradually, as we tucked into bruschetta with portobello mushrooms, her mood lifted. But our meeting did get me thinking about my own fast approaching half-century.

I find looking to the 50-plus pioneers on TV helps to quell any fears. The outdated shelf-life has been dismantled and there is a long list of brilliant female presenters to prove it.

Fiona Bruce isn’t some token middle-aged woman at the BBC. Alongside her, at 52, my former running partner Sophie Raworth is a familiar face on our screens, with enough energy to run the scorching desert challenge, Marathon des Sables, to celebrate her 50th.

Newsnight presenter Emily Maitlis turned 50 earlier this week and appears on the cover of Tatler magazine in celebration.

And, of course, at ITV we’ve got Lorraine Kelly, who is at the top of her game at 60.

Looking good once you go through the roadblock is no longer a surprise. Take Anthea Turner, also 60, who made the front pages with her yellow bikini holiday snap this week.

I bumped into her last year at the opening of a Mayfair nightclub and I can vouch she doesn’t look much different from when she presented Blue Peter. She is honest about her cosmetic treatments, including injections in her hands so they look plumper.

The ultimate in effervescent midlifers has to be Davina McCall. At 52, she’s appeared in revealing workout gear on the cover of Women’s Health magazine, saying she wants to dispel the myth your sex life dies at 50. 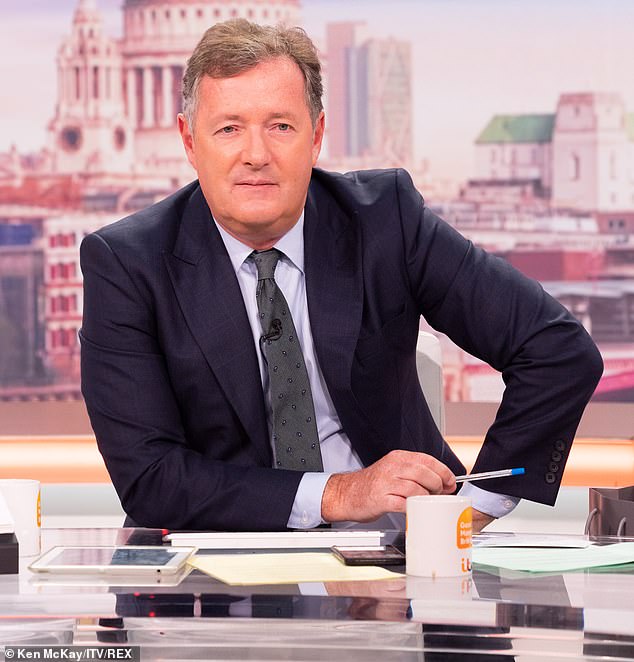 Susanna said Piers (pictured) cried foul and told her that she was a hypocrite, after begging her to shame him into losing excess weight

‘I walk around like a foxy minx now because I feel like a foxy minx,’ she confessed. Her enthusiasm and openness about feeling sexy is awe-inspiring, and her abs are the envy of 20-year-olds.

My birthday is in December and, unlike my friend, I am in an enthusiastic frame of mind about it. Ageing is a blessing, I tell myself.

Yes, the restrictions mean my Ibiza party is out of the question. But I won’t be burying my head in the sand and pretending it’s not happening. I’ll be putting my party frock on, going out to dinner and raising a toast to Fiona, Davina and all the other women who are still going strong.

Why I shouldn’t have called Piers a ‘chubster’

Calling Piers a ‘chubster’ this week, in front of millions of viewers, went against what I believe about fat shaming and brought me out in hives.

Yes, he has piled on the pounds during lockdown, although not as many as me. I find mine easier to conceal because they’re hidden behind the GMB desk on my hips. Anyway, Piers begged me to shame him into losing the excess. Only, as soon as I did, he cried foul and told me I was a hypocrite. It’s true. Now, I’m focusing on food and activities that will keep me strong and healthy rather than obsessing about fat and carbs.

Next time Piers asks me to fat-shame him on TV, I’ll make him a kale smoothie to try on air. 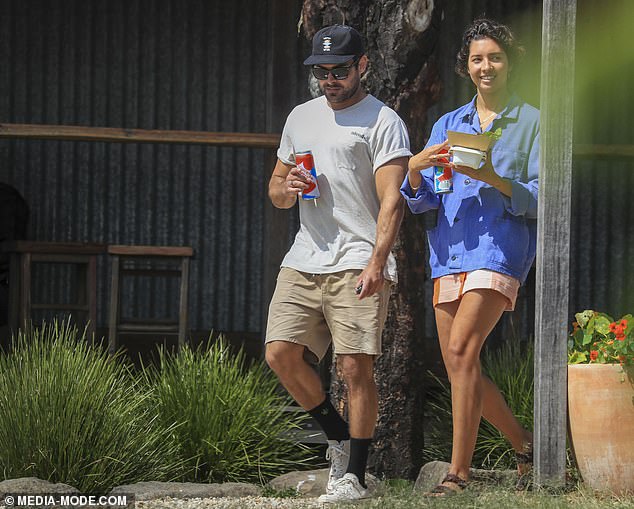 Susanna said she feels a jolt of joy when A-list Hollywood actors pair up with regular women. Pictured: Zac Efron and his girlfriend Vanessa Valladares

Is it just me who gets a little jolt of joy when A-list Hollywood actors pair up with regular women? Zac Efron, 32, has been spotted holding hands with his new girlfriend Vanessa Valladares, 25, who he met when she was waitressing in Byron Bay, Australia.

While many stars date among themselves, or improbably younger women (I’m looking at you, Leo), or showboat with impossibly augmented models, Zac seems to have found the love of a real woman. And by real, I mean she has a proper job in a café, and was dressed down in a trendy shirt and clashing skirt rather than preening for the cameras.

They looked casual, relaxed and happy. What a refreshing change from the Hollywood norm.

I hate the blame and responsibility Health Secretary Matt Hancock has placed on schoolchildren and those starting out at university.

He told Radio 1 Newsbeat listeners, ‘Don’t kill your gran’ which is unfair.

Smearing a generation is unhelpful, especially when the Government was woefully slow on testing, lockdown, care homes and masks. Let alone the chaos surrounding summer exams.

Last week, my mum came over to see the boys before they went back to school, knowing the infection risk would be higher after they’d been in the classroom. She brought chocolate cake, and we were able to catch up in person for the first time in weeks.

Not all young people are at raves. My boys adore their grandparents and don’t want them put at risk.

Hancock needs to get his own house in order before he points the finger.