Our taxi ride from the airport in Palma, Majorca, is delightful, a sun-baked landscape peppered with pastoral views of charming smallholdings and livestock.

‘It all seems rather lovely,’ I say to my 16-year-old daughter, Esme.

She has a point. We’re heading to Magaluf, after all.

Sussannah Constantine went with her daughter Esme, to Magaluf the teen party capital

What am I thinking? Magaluf. The very word brings a shudder, all beery hooligans and half-dressed girls unconscious in the gutter.

A place notorious for its all-you-can-drink bars, where behaviour is so sordid that even the mayor wants the Brits to go home.

Including, presumably, the ever-growing hordes of well-heeled British school children who these days land by the posh plane load for some post-exam hedonism.

And now my own 16-year-old daughter wants to join them for the weekend. 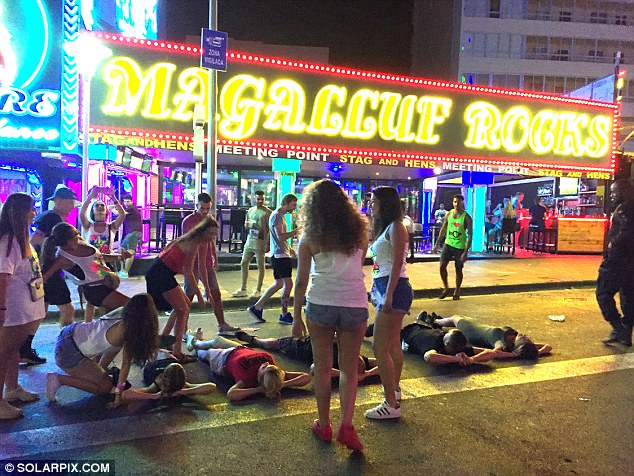 Susannah said: ‘What am I thinking? Magaluf. The very word brings a shudder’

She is raving about the place – but I, to her horror, am defiantly in tow as we make our way across the Majorcan countryside.

Appalled yet secretly intrigued, I am on watch. Every. Single. Second.

‘You’ll be so embarrassing because you are a has-been and so OLD,’ she moans.

Right on both counts, I reply. I am a 55-year-old forgotten TV presenter and take statins. But I am also an anxious mother.

I want to know what’s wrong with our idyllic family holidays in Cornwall. Whatever happened to the little girl who loved Pooh Bear? I am about to find out…

My one concession to age is a swish four-star hotel, which is just as billed: serene and sophisticated. ‘It would be amazing,’ says Esme. ‘If I had my friends.’ 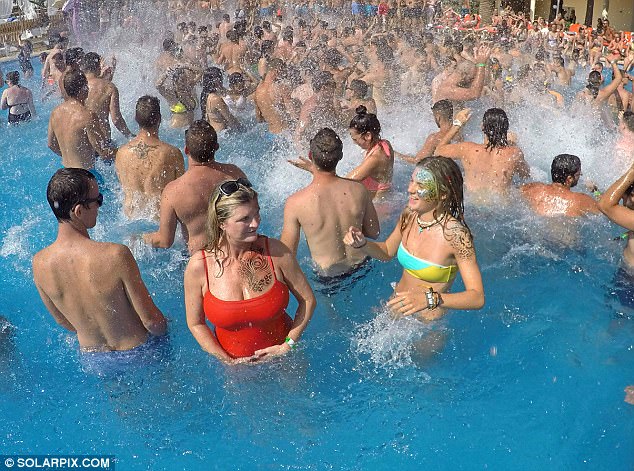 Susannah and Esme at a beach party at the sun-soaked, teen-filled location

Instead, she has me.

It’s Friday evening, and I change into a suitably relaxed outfit that takes in the colours of summer, orange and yellow, only to be met with a shriek:

‘What ARE you wearing? Are you bantering?’

I am not, so dressed as we are, we venture down into the beating heart of Magaluf. And into Dante’s Inferno.

The Strip is a 300-yard stretch of bars, nightclubs and deafening music pumping from every doorway.

Everything is centred around booze. With each step, we are assailed by twentysomething nightclub ‘greeters’ thrusting cards offering free entry and free drinks.

The pavement is packed with teenagers in varying states of dress and inebriation. 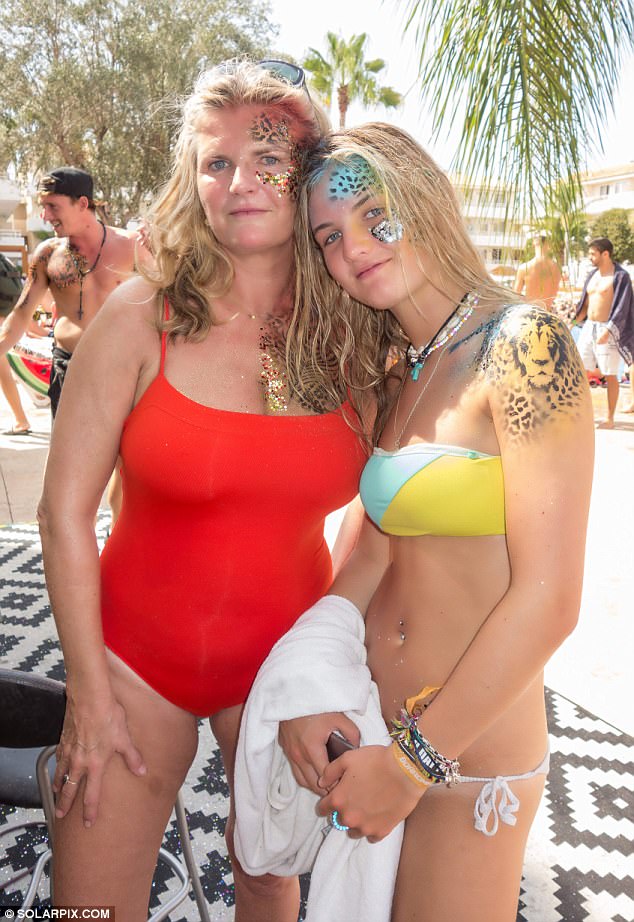 Susannah was shocked at what she saw at the party island

The boys wear football shirts, the girls are in flat shoes – important for when they’re too drunk to walk. They have applied quite enormous amounts of make-up and their bare midriffs display pierced belly buttons, regardless of shape and size.

Even the accents are jostling – Glasgow, Manchester, Yorkshire, Liverpool and Eton.

At every five paces the thumping music changes. Go-go dancers on podiums had begun their long night of degradation.

The last of the sunbathers are here too, still in their trunks and bikinis. Many are already half cut, make-up melting in the heat and false lashes askew.

It’s not quite all Brits. There’s a smattering of Dutch and Germans and the Spanish are instantly recognisable for their clean, smooth tans and stylish clothes.

But they, too, are glassy-eyed and lolling, attracted by the same promise of absurdly cheap cocktails and easy sex.

It is, quite literally, every mother’s nightmare.

It’s Saturday – a new day and a new extravaganza, this time in a pool, complete with vertiginous water slides.

The pool is a heaving mass of bronzed bodies. The boys are ripped and the girls all Barbie curves and porn-star pouts.

The pool was dubiously cloudy enough for all manner of groping to go unseen.

A small stand offered sequin and body painting – the mandatory look for summer, I’m told – done in less than a minute for €15.

Esme looks like a sleek mermaid. I resemble a sand-encrusted walrus.

Despite having to bare my sagging flesh in a bathing suit, we have quite a laugh until the sky scraping slides wipe the smile off my face. ‘Come on mummy. Let’s do it,’ says my daughter, pointing to the highest.

Without my glasses I can’t see the top, but I can see it’s not suitable for anyone over a size 10.

‘I’m too scared.’ And I was. My beautiful daughter bobsleighs down, squealing in delight. I want to hug her, but am banned. Public displays of affection are worse than death.

This evening’s special attraction is a ‘Commando War Party’. We are issued with Sylvester Stallone camouflage headbands and ordered to ‘blitz the best bars on the Strip’. Our ‘Staff Sergeant’ will hand out drinking penalties for ‘insubordination’.

Included in the €25 ticket is unlimited spirits and beer – for five-and-a-half hours. 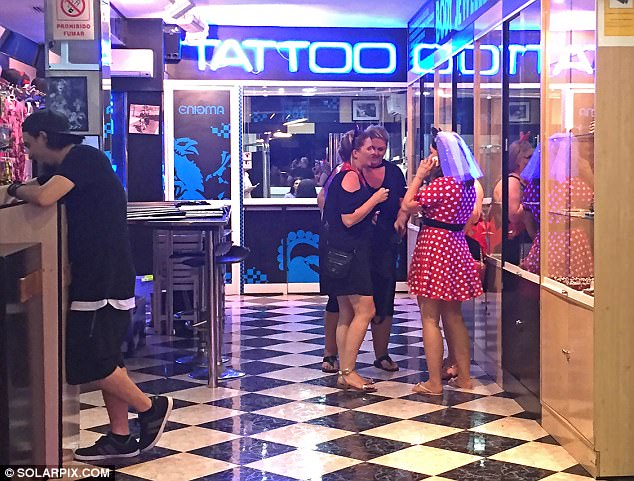 A tattoo parlour where many teens get ‘holiday regret’ tattoos

Some of the kids have gone all out with their costumes. Green and black sequins strategically placed for minimum coverage and maximum impact. Yelps and war cries rally the army of revellers up the Strip. We step inside the clubs and everything immediately turns up a notch.

The noise, the drinking and the drunken shrieks.

There are revolting DJs eyeing up girls and rubbing themselves against the side of their booth.

Everyone bumps into you, treads on your toes and spills their drink. I have five poured over me in a matter of minutes. 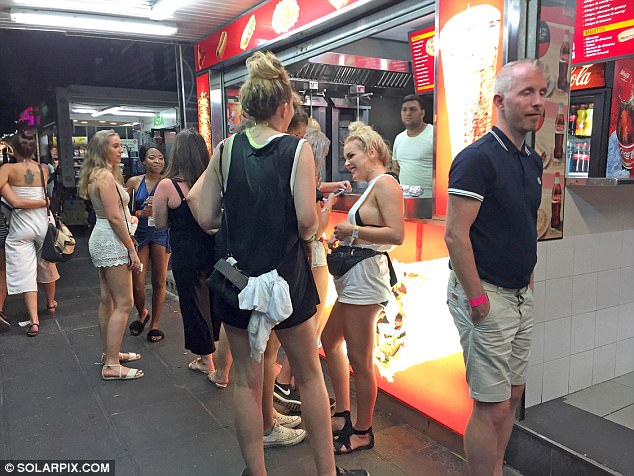 The 55-year-old said: Is Magaluf as bad as I thought? Nearly, but not quite. Would I go again? Are you insane?

Our final night and we’re ready for the Big One – a late crawl along the Strip. It is 2am, the witching hour, when Magaluf becomes Shagaluf.

Photographs on the website show kids gleefully being sprayed with ultraviolet slime in their smalls. Call me a prude but I can’t see the attraction.

There is no sense in getting my designer frock ruined, and I’m not going in a bikini. Cut-off jeans and a T-shirt are as lamb as this mutton is prepared to go.

The venue is like cave. A sweating, jostling mob is keening and screaming to be showered with paint from jets disguised as small cannons and watering cans on the walls and ceiling. Two DJs, well past their prime, shimmer in pulsating lights and pounding music.

High on the vibe, Esme and her friends disappear into the fog – and this is the moment I have to let go.

She was in good hands and in her element and, to my relief, I had no further part in it.

Is Magaluf as bad as I thought? Nearly, but not quite. Would I go again? Are you insane?

I love my mother but going to Magaluf with her was beyond humiliating. The first thing I did when I got to the hotel was separate the twin beds because she can snore like a hippo.

And any hope that she might spare my blushes evaporated when we hit the Strip. Random people kept coming up and saying they recognised her from her TV days. Then they would ask me ‘Why are you with your mum?’

There were PRs from the bars trying to drag us in, offering us free shots, and a fishbowl cocktail for a fiver. It would have been brilliant.

As for the pool party, it was cringeworthy. All she did was grumble non-stop, about disgusting things that could be in the water. Obviously if I had been with my friends I would have gone crazy. The craziest it got with mum was putting glitter on our faces and me going on the water flume. On the way home we walked on the beach and there was a group of good-looking boys. I might as well have been invisible with mum by my side. She got more attention. People were photobombing her as they all knew who she was.

Sunday night was our big night. We had planned to go to the UV party at the Carwash nightclub. Mummy dressed as if she were going for dinner at a posh restaurant. Worse was to come. The idea is that, when you go in the club, you’re covered in paint. She was absolutely not expecting it. She looked like a fluorescent sea monster. It was so funny.

Then she started ‘mum dancing’, standing there with her arms wobbling in the air, trying to be cool. I was like, ‘I don’t’ know you. At all.’

There are loads of things I love doing with my mum, but going to Magaluf is not one of them. I will never be doing it again. Ever. No way. Sorry mama!